Despite the continued conflict in South Sudan, accountability for human rights violations can be initiated drawing on the recent UN Commission on Human Rights in South Sudan investigative report.

An air of impunity pervades the conflict in South Sudan, which shows no sign of ending while the humanitarian costs continue to mount. To counter this perception, observers should keep in mind that the UN Commission on Human Rights in South Sudan announced in February that it had collected enough evidence to hold more than 40 South Sudanese officials accountable for war crimes and crimes against humanity. Drawing from events in four of South Sudan’s original 10 states (Western Bahr el Ghazal, Central Equatoria, Eastern Equatoria, and Upper Nile) from 2016 and 2017, the report found egregious violations of human rights, humanitarian law, and international criminal law committed primarily by government forces and its affiliated militia, but also by armed opposition.

The Commission’s conclusion that war crimes and crimes against humanity are still occurring affirms earlier findings by the Commission, UN Mission in South Sudan (2014), the African Union (2015), the UN Office of the High Commissioner for Human Rights (2015), and several nongovernmental organizations. The report contains harrowing stories of crimes including: 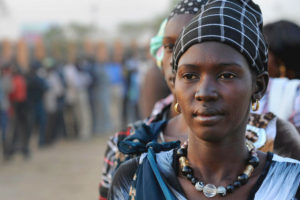 The searing brutality of these decidedly ethnically targeted crimes leaves little to the imagination. For instance, the Commission recounts through the words of a surviving son, the story of a woman whose eyes were gouged out by SPLA soldiers with a spear when she sought to protect her 17-year-old daughter from being gang raped. After being blinded, she was gang raped by 17 soldiers. Her husband was then castrated, his genitals were mutilated, and then he was beheaded.

The Commission identifies, for the first time, individuals suspected of planning, ordering, facilitating, and abetting international crimes and human rights violations. In particular, the report adopts command responsibility as a legal framework for establishing the criminal responsibility of military and political leaders. This framework is used to apportion responsibility to individuals named in a confidential list submitted to the UN Office of the High Commissioner for Human Rights (OHCHR) to be maintained pending legal action. This list will be transmitted to the prosecutor of the hybrid court for South Sudan once he or she is appointed. The resolution that authorized the Commission allows individual states to access preserved evidence should they wish to prosecute individuals in their national courts.

“The report findings highlight that the conflict is marked by a progressive deterioration of the humanitarian situation.”

The report findings highlight that the conflict is marked by a progressive deterioration of the humanitarian situation. Tens of thousands of people were dislodged—repeatedly in some cases—by the counterinsurgency operations launched by the SPLA and affiliated militia in each of the four areas assessed. According to the Commission, the number of people displaced has passed 2.4 million refugees and 1.9 million internally displaced. Of these, over 1 million have taken refuge in Uganda alone.

Humanitarian agencies reported systematic impediments to access that have exacerbated food insecurity, resulting in some deaths by starvation. Barriers to access include exorbitant work visa fees, denial of permits to access areas of need, bureaucratic obfuscation, roadblocks, looting of supplies and facilities, and the killing and harassment of aid workers. There were 1,159 humanitarian access incidents in 2017 alone. Forty-seven percent of these involved violence. According to the Commission, humanitarian aid has become a “political football,” with multiple sides in the fragmented conflict seeking to manipulate distribution of assistance in favor of certain communities or toward themselves.

The Commission’s report demonstrates that the peace agreement signed in 2015 has failed to end egregious abuses and create conditions that allow the implementation of measures to return the country to normalcy. To protect civilians and humanitarian workers from continuing intimidation, the African Union Peace and Security Council (AUPSC) has called for adherence to the Agreement on the Cessation of Hostilities, Protection of Civilians, and Humanitarian Access signed by the parties on December 21, 2017.

“The peace agreement signed in 2015 has failed to end egregious abuses and create conditions that allow the implementation of measures to return the country to normalcy.”

Ceasing attacks on humanitarian workers by all parties is imperative and should be backed up by punitive measures in case of violations. The Terrain Hotel trial involving the prosecution in a military court of 12 soldiers who had gang raped several foreign aid workers and killed John Gatluak, a Nuer journalist, in July 2016 is instructive in this regard. The case was brought to trial after strong international pressure compelled the Government of South Sudan (GOSS) to take action. The case shows that even in a context of limited capacity to pursue justice domestically, ways can be found to hold trials for egregious crimes committed during the course of the conflict. It also demonstrates the importance of external pressure to facilitate domestic action to ensure accountability for abuses.

A future hybrid court should prioritize investigation and prosecution of war crimes against the humanitarian sector, including the killings of 97 aid workers since the fighting began in 2013. The GOSS should also facilitate the delivery of assistance by eliminating permit fees and removing bureaucratic red tape and other impediments to access.

Attacks on the humanitarian sector have taken place in a context of increased intimidation of civil society and the media through murder, detention, and dismissals. Some of the abuses documented in a recent UNMISS-OHCHR report include censorship of articles, confiscation of newspapers, closure of media houses, and blocking of websites. The GOSS intelligence organization, the National Security Services, is responsible for more abuses than any other institution, committing 33 percent of incidents. Other institutions cited are the police, SPLA, local officials, and the South Sudan Media Authority.

“Given the government’s continued perpetuation of these actions, the process of establishing the proposed hybrid court should be accelerated.”

Given the government’s continued perpetuation of these actions, the process of establishing the proposed hybrid court should be accelerated. The AU should consider appointing the prosecutor prior to the signing of the memorandum of understanding envisaged in the peace agreement between the AU and GOSS. Juba should fast track national legislation that affirms cooperation between the hybrid court and the GOSS, including with regard to access to witnesses, review of documents in the custody of the government, and sites of burials, among other issues. Should the AU’s Peace and Security Council’s calls for the adoption of national legislation fail to elicit a response, and if the prosecutor is unable to proceed for lack of cooperation, consideration should be given to establishing an UN-backed ad hoc international tribunal or triggering the jurisdiction of the International Criminal Court.

The GOSS has also delayed establishing the Commission on Truth, Reconciliation, and Healing and the Reparations Authority provided for in the 2015 peace agreement. Accordingly, donor support for civil society efforts to document violations and crimes should be enhanced.

In the face of the continuing GOSS obfuscation, despite the serious criminal allegations and deteriorating humanitarian conditions, the international community, primarily consisting of the UN, AU, and Inter-Governmental Authority on Development, must exert maximum leverage—diplomatic, political, and military—to precipitate remedial action on human rights, humanitarian access, and justice. The GOSS’s active suppression of these tenets of the rule of law, as documented by the Commission’s assessment, compels regional actors to enforce sanctions adopted by the UN, EU, and bilaterally to exert pressure on political and military decisionmakers in South Sudan to change course.