A Path to Justice in South Sudan

Proposed justice measures in South Sudan—including the Hybrid Court—can be pursued despite disruptions in the implementation of the peace agreement.

The Agreement on the Resolution of the Conflict in South Sudan (ARCSS) negotiated in 2015 has been the cornerstone of efforts to reestablish stability in Africa’s youngest nation. This wide-ranging peace agreement addresses ceasefire arrangements, the structure of a transitional government of national unity (TGoNU), constitutional reforms, humanitarian assistance, and accountability for human rights violations committed since the civil conflict erupted in December 2013.

The lack of political will by South Sudanese leaders to implement the ARCSS, however, has left the transition process in shambles. Fighting continues and has spread to every region of the country, humanitarian access remains severely obstructed despite an estimated 4 million refugees and displaced South Sudanese since 2013, famine has taken hold, and most of the genuine opposition has had to flee the country due to the government’s oppression of civil society, journalists, and any form of dissent. Despite these conditions, the lack of an alternative peacebuilding framework perpetuates the commonly held notion that the ARCSS provides the only path for moving forward in South Sudan. The element of ARCSS that many South Sudanese are most reluctant to lose is Chapter V—on transitional justice, accountability, reconciliation, and healing—and with it the institution of a hybrid court that offers some hope for justice and an end to impunity in the country. Often overlooked in this supposed tradeoff is that the key accountability measures negotiated into the ARCSS can be retained even outside the Agreement.

The State of the ARCSS 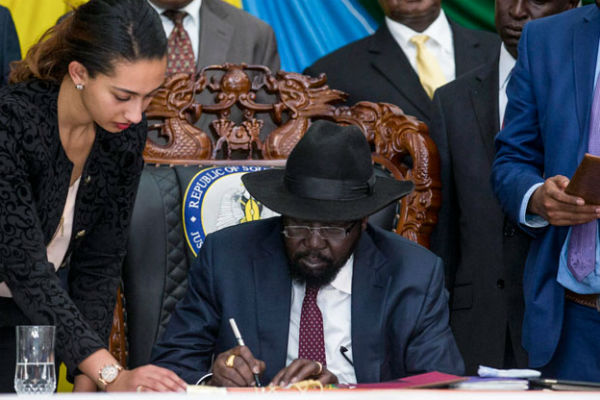 Almost since the moment the ARCSS was adopted in August 2015, the parties have refused to honor ceasefire commitments. South Sudan’s president, Salva Kiir, famously signed the ARCSS “with reservations” detailed in a list of complaints and qualifications. While rejected by the ARCSS’s international signatories from the Intergovernmental Authority on Development (IGAD), the African Union (AU), and the “troika” (the United States, Norway, and the United Kingdom), the regime nonetheless proceeded to implement many of these reservations, without meaningful international reaction. These and other measures undertaken by the regime have consequently rendered the ARCSS, the term of which was to extend to May 2018, inoperable. Among others, these include:

Despite these and many other violations, the GOSS regularly affirms the ARCSS as the blueprint for finding lasting peace, even as it continues to prosecute and expand the war.

Of particular import for the viability of the ARCSS is the National Dialogue initiative inaugurated by Salva Kiir in May 2017. The stated objectives set out for the National Dialogue are: to end violence at national and communal level, including social disputes over land and cattle; restructure the state and negotiate a social contract; resolve issues related to sharing of resources; develop a framework for national peace, healing, and reconciliation; and agree to hold elections in 2018. With the exception of the question of elections, all of the other issues were delineated in the ARCSS. In this way, the National Dialogue runs counter to ARCSS and appears calculated to replace it.

Many South Sudanese and observers in the international community take the view that the National Dialogue is fatally defective and cannot be credibly held out as an alternative peace process. The UN Security Council has stipulated the minimal conditions for the National Dialogue to be deemed credible, which the government has still failed to meet. From a political perspective, it is difficult to see how a national dialogue that excludes the main opposition and rebel movement opposed to the government and conducted in an environment of severe insecurity and humanitarian crisis can deliberate and prescribe how the conflict should be resolved.

The Fate of Accountability Institutions

What implications do these actions have for accountability for crimes and human rights violations committed since December 2013 that were to be addressed under ARCSS? In fact, the survival of the hybrid court, the Commission on Truth, Reconciliation, and Healing, and the Reparations Authority are not contingent upon the ARCSS but have a basis of their own outside the peace agreement. 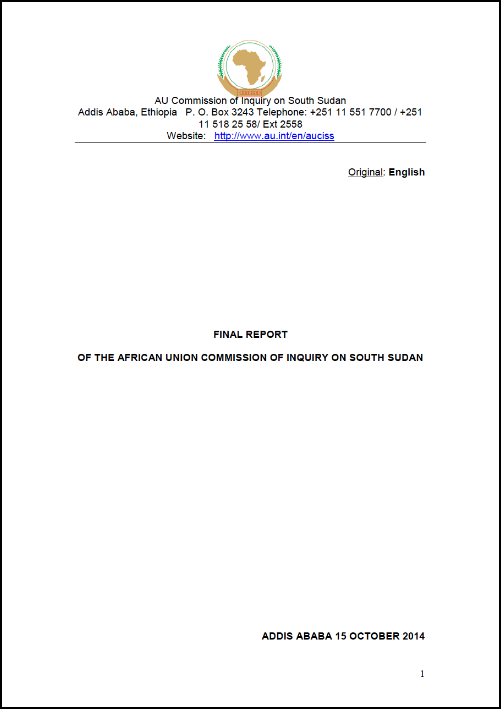 First, having found that there were reasonable grounds to believe that war crimes and crimes against humanity had been committed between December 2013 and October 2014 when its report was completed, the AU’s Commission of Inquiry (COI) recommended the creation of a hybrid court to prosecute perpetrators. The COI also provided for the creation of a truth commission and a reparations mechanism. In fact, when the idea of a hybrid court was first floated by the UN Secretary General following the publication of the May 2014 Human Rights Report by UNMISS, the COI issued a press release advising that it was considering an accountability mechanism.

Second, while negotiating the ARCSS, IGAD mediators were fully aware of the COI’s work on accountability and essentially aligned its recommendations with the COI’s findings on the subject. Indeed, the ARCSS process was guided by the understanding that individuals found responsible for human rights violations in the COI would be prohibited from participating in the Transitional Government of National Unity (TGoNU). This guidance was contained in the protocol signed by IGAD heads of state and governments (including Salva Kiir) on August 25, 2014. That part of the protocol was never applied, however, in part because Sudan People’s Liberation Movement-in-Opposition (SPLM-IO) did not sign the protocol.

Third, Article 4(h) of the Constitutive Act of the AU lists as one of its principles as “the right of the Union to intervene in a Member State pursuant to a decision of the Assembly in respect of grave circumstances, namely: war crimes, genocide and crimes against humanity.” This provision is often interpreted as a justification for military intervention. However, Article 4(h) also provides a legal anchor for a wider range of interventions, including the creation of a judicial body to prosecute those that commit these crimes.

This conclusion is supported by instructive precedent and established practice at the level of the United Nations. The UN Security Council (UNSC) has the power to establish a judicial body in response to situations in which international crimes such as genocide, war crimes, and crimes against humanity have been committed. When the UNSC’s authority to take this measure was challenged before the International Criminal Court for the Former Yugoslavia (ICTY) in the Dusko Tadic Case, the court held that the UNSC had the authority to decide on an appropriate response to a threat to international peace and security. In this case, the Appeals Chamber of the ICTY ruled that establishing an ad hoc international criminal tribunal following a fact-finding mission into crimes committed in the former Yugoslavia was the appropriate response for the UNSC. Following a similar action in Rwanda, it is now settled that UNSC can create a judicial body in appropriate cases. The same reasoning informs the role reserved for the UNSC in triggering the International Criminal Court’s jurisdiction as it did in the situation of Darfur, Sudan.

The legal reasoning applies with equal force to the AU’s role under Article 4(h) of the Constitutive Act of the AU. In the case of Hissène Habré, the AU requested that Senegal prosecute the former Chadian dictator for torture and crimes against humanity because the AU lacked the means to do so, although it had the authority. Nonetheless, the AU subsequently played a critical role in staging the trial that culminated in a conviction.

The ARCSS process was guided by the understanding that individuals found responsible for human rights violations in the COI would be prohibited from participating in the Transitional Government of National Unity.

Fourth, IGAD as a subregional intergovernmental body exercises “delegated” functions in relation to regional peace and security. Within the AU’s Peace and Security Architecture, regional organizations such as IGAD are integral to conflict resolution but occupy a rung lower than the AU, which itself sits in a subordinate relationship to the UNSC, the preeminent body in maintaining international peace and security. Indeed, in its Communiqué issued in Banjul, Gambia, on December 30, 2013, the AU Peace and Security Council sitting at the level of heads of state took note of démarches commenced by IGAD a week earlier and encouraged IGAD to pursue and intensify efforts toward the resolution of the conflict in South Sudan. In the same communiqué, the Peace and Security Council recommended the creation of a COI, prescribed measures for the AU Commission, and named envoys to support IGAD’s mediation effort.

Having delegated the peacebuilding responsibilities to IGAD, the AU is well within its authority to take up the entire process itself, if it deems warranted. This includes elements of accountability, transitional justice, and reconciliation as articulated in the ARCSS.

In sum, while much remains to be done to get the political process in South Sudan back on track, the ARCSS’s Chapter V institutions on transitional justice, accountability, and reconciliation—including the hybrid court—have a firm legal grounding outside the ARCSS should the AU wish to pursue them.