The Challenging Path to Reform in South Africa

Despite voters’ repudiation of corrupt governance practices, the ANC remains divided in its commitment to reforms.

The Zuma Effect Continues to Hurt the ANC

Perceptions of disillusionment and growing polarization stand out in the wake of the general elections in South Africa. With just 66 percent of voters casting ballots in May’s elections, turnout was the lowest in South Africa’s democratic history. This downturn reflects widespread disenchantment with government among South African citizens. Rampant corruption and impunity under former President Jacob Zuma, who led South Africa from 2009-2018, have driven away voters, especially young people who feel the ruling African National Congress (ANC) has lost its way. As much as 4.9 trillion rand ($339 billion), or a third of South Africa’s GDP, was misdirected during Zuma’s scandal-filled presidency.

Although the ANC did not perform as badly at the polls as many observers anticipated, its 58 percent rate of support was its worst showing in a national election since democracy was established in 1994. This continues its slow decline in support from 70 percent in 2004, 66 percent in 2009, and 63 percent in 2014. It is now 35 seats short of the two-thirds majority it had enjoyed continuously since 1994. Some ANC voters gravitated toward the populist Economic Freedom Fighters (EFF), a breakaway of the ANC’s militant Youth League. Others supported the centrist Democratic Alliance (DA), which has made inroads among black voters despite its identity as a predominantly white party.

The EFF, which campaigned on a redistribution platform, including land confiscation and nationalization of mines, secured 10 percent of the vote, up from 6 percent in 2014, becoming the only mainstream party to increase its share of the electorate. The EFF is now the official opposition in three provinces. Meanwhile, the DA remains the official opposition at the national level, despite having failed to increase its share of the vote for the first time since 1994. A section of its white supporters voted for Ramaphosa in the hope of countering Zuma’s followers. Others chose the white nationalist Vryheidsfront (Freedom Front) partly due to rising fears of forceful land and property expropriation, which the EFF and Zuma’s most ardent supporters have championed. 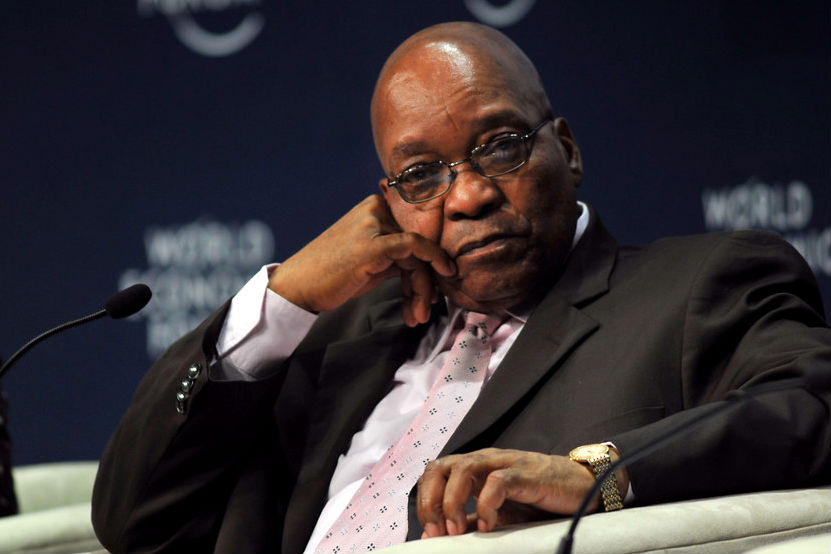 There was a spike in racially-charged rhetoric under Zuma. Moreover, several racially-based parties formed before the elections, such as Black First Land First (BLF) and African Transformation Movement (ATM), have links to the former president. While campaigning, BLF members forcefully occupied and vandalized white-owned homes and farms in Cape Province. Reports also surfaced of small groups of white farmers arming themselves for self-defense. Notably, however, the BLF and ATM performed poorly in the polls. Moreover, the Cape Town-based Institute for Justice and Reconciliation’s latest survey of race relations found that nearly 70 percent of South Africans support greater racial integration and reconciliation. Left unchecked, however, the rise in racial rhetoric threatens to undermine the foundations of the post-apartheid settlement.

Despite the popular repudiation of the politics of patronage associated with the Zuma government, many Zuma allies have yet to acknowledge that there is a problem. The result is a continuing struggle between the Zuma and Ramaphosa factions within the ANC since the election. The battle for the soul of the ANC is no longer driven by contending ideological positions but by fierce divisions between those opposed to the plundering of state resources and those implicated in it.

Corrupt elements in the rank and file fear prosecution and have vigorously resisted reforms. They have also forged alliances with populists to increase their influence in the party’s local branches. In contrast, those agitating for reform are pushing for the comprehensive clean-up of state institutions—a top priority since Zuma was removed. To them, the party’s survival is tied to the success of anticorruption efforts that began after Ramaphosa took over the presidency.

The ANC’s internal watchdog, the Integrity Commission, recommended prior to the election that six senior figures, including several in the powerful National Executive Committee, be removed from the ANC’s list of parliamentary candidates. Similarly, the Stalwarts, revered elder anti-apartheid leaders who threw their support behind Ramaphosa, vowed to apply pressure to stop these officials from taking seats in the cabinet. On May 22, 2019, pressure from the Stalwarts stopped the swearing in of Deputy President David Mabuza pending disciplinary proceedings in which he was accused by the Integrity Commission of prejudicing the ANC and bringing it into disrepute. Mabuza was a close Zuma confidante who, at the last minute, switched sides on the floor of the 2017 National Conference to help Ramaphosa secure the party leadership and thus the presidency. However, at the Integrity Commission’s internal disciplinary hearing, he successfully challenged its capacity to conduct investigations and was duly sworn in on May 28, much to the disappointment of Ramaphosa’s allies and supporters who had lined up a replacement. Other senior officials who withdrew their names under pressure include two former cabinet ministers, Malusi Gigaba and Nomvula Makonyane, both incriminated in the ongoing Judicial Commission of Inquiry into Allegations of State Capture.

Hopes that the new cabinet would signal a decisive break with the corruption and impunity of the recent past, however, were stymied with posts evenly split between Ramaphosa and Zuma loyalists. They are unlikely to work together on reforms given that many officials may face prosecution in the coming months. However, the party’s factions may be able to forge common ground on more radical policies such as land expropriation as all camps within the ANC share an interest in undercutting the EFF’s populist support. Ramaphosa, in contrast to Zuma’s supporters, rejects the outright seizure of land and pledges to only redistribute unused land. 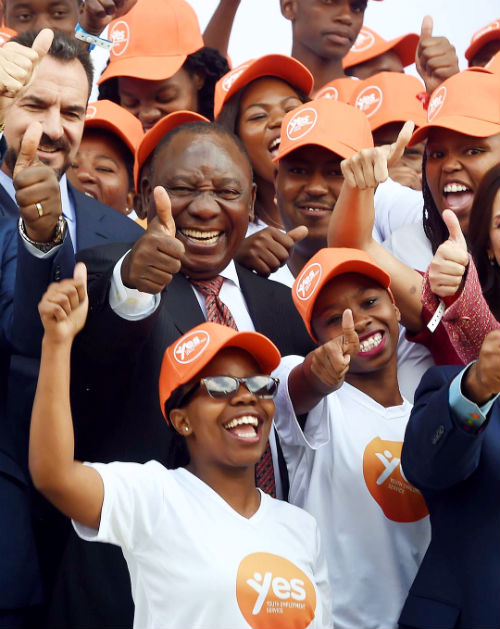 A survey by Statistics South Africa found that only 341,186 of the 1.8 million 18- and 19-year-old first time voters—19 percent—registered to vote. In the 20-29 age bracket, one in two citizens were registered. These two age cohorts are known as the so-called “born free generation.” They see the ANC as a standard political party, not a liberation movement. They are more demanding of service delivery and less forgiving of government failures than the older voting blocs. Among those over 30 years old, voter registration was at 70 percent. Among older age cohorts, registration rates were even higher.

Now hovering at 50 percent, youth unemployment accounts for much of the widespread sense of alienation felt by younger voters, who blame the ANC government for failing to provide career opportunities. The roughly 3 million unemployed South African youth mostly reside in metropolitan areas and urban centers where poverty is highest. These are strongholds of the EFF whose populist policies have found resonance and steadily undercut support for the ANC.

South Africa’s Role on the Continent

The 2018 Department of International Relations and Cooperation (DIRCO) review of South Africa’s foreign policy found that the ills associated with the Zuma era also severely tarnished the country’s image and influence abroad, causing it to retreat from continental and global affairs. South Africa’s foreign policy was highly personalized, with experienced professionals in DIRCO sidelined in favor of loyalists close to Zuma and his business associates. Pretoria’s 2016 threat to withdraw from the International Criminal Court came as a shock to those who regarded the Court as a defender of human rights, contrasting sharply with South Africa’s reputation as a major architect of the Court. Some blamed the Zuma government’s lackluster engagement on the Burundi crisis on the pursuit of business interests by ruling party functionaries in both countries, undercutting South Africa’s historical role as chief sponsor of the Arusha Peace and Reconciliation Agreement. Similar accusations were made with respect to South Africa’s dealings with the Central African Republic, the Democratic Republic of the Congo, South Sudan, Sudan, and Zimbabwe.

Reviving and reclaiming South Africa’s leadership role in Africa was one of the Ramaphosa camp’s major campaign promises. During the launch of the independent review, outgoing Foreign Minister Lindiwe Sisulu said: “We once were a giant in the world and our reputation was well known because of what we represented… In Mandela’s memory, in his honor, we have a responsibility to regain the stature he left for us.” The extent to which this can be repaired will largely depend on reforms within DIRCO and the reestablishment of professional standards as recommended by the 2018 review.

Push for Reform both Outside and Inside the ANC

In the aftermath of the 2019 elections, the effort to reform South Africa’s governance processes cannot rely on the ANC but will need to unfold on several fronts. Despite the many challenges, it should be recognized that aspects of South Africa’s democracy have become more vibrant. This is seen in the resiliency of certain oversight bodies such as the Public Protector’s Office and the judiciary. Similarly, South Africa is gradually becoming a genuinely competitive multiparty system. As the ANC’s dominance recedes, opponents have strengthened ties to their constituencies. This is enforcing a form of vertical accountability on elected officials to South African citizens. Officials from 14 political parties were elected to the National Assembly, the largest number since 1994. After losing its two-thirds majority, the ANC will be required to work across party lines to pass legislation, develop policies, and make constitutional changes.

The ANC, meanwhile, still faces stark choices between fundamental change and the continued entrenchment of patronage, graft, and impunity. Those implicated in gross misconduct still hold formidable sway and control roughly half of the new cabinet. They will likely put up stiff resistance to accountability. Yet, stepping back from reforms will alienate the public and ultimately weaken Ramaphosa.

Civil society and the public also have a role to play in holding the government accountable to its pledges and ensuring that the ANC and other political parties move reforms forward. South Africa boasts high levels of civic activism that played a key role in applying pressure on state institutions to investigate the networks of state capture that had taken root. Sustaining this push ultimately led to Zuma’s removal. Continued public engagement with the reform process will therefore be crucial if the ANC and the government more generally are to rebuild trust with citizens.