Power Shift in the DRC Cracks open a Door to Reform

A shift in the balance of power within the National Assembly enhances the influence of President Felix Tshisekedi and represents a step toward long-delayed democratic reforms.

A glimmer of hope emerged in the Democratic Republic of the Congo’s (DRC) barren political landscape in December 2020 when the National Assembly voted to remove its Speaker, a longtime ally to former president Joseph Kabila, Jeanine Mabunda. The move was significant since, despite being out of office since January 2019, Kabila has continued to wield the levers of influence in the DRC’s patronage-laden political system through his control of key government bodies. The unseating of the Speaker from the lower house of Parliament followed months of consultations among President Felix Tshisekedi’s alliance partners, fellow opposition deputies, and receptive lawmakers from Kabila’s Common Front for Congo (FCC), suggesting that a path to reform is possible.

The replacement, in February 2021, of powerful executive Prime Minster Sylvestre Ilunga Ilunkamba, from Kabila’s FCC, with Sama Lukonde Kyenge, a key ally of Tshisekedi, marks an additional shift in the balance of power that could bring about a more loyal cabinet to advance his reform agenda. Tshisekedi’s stature has been boosted further by his appointment as Chairman of the African Union, a role that will see him steering the continental body’s agenda in 2021.

Many Congolese view Tshisekedi’s growing influence as a hopeful sign for advancing Congo’s democratization process. He has been in a tenuous position since winning the controversial general election of December 2018. His coalition, Course for Change (CACH), has been minority partner in all branches of government, something that could change now that reformers appear to be increasing their numbers in the National Assembly.

Until the anticipated changes materialize, however, the FCC continues to control 42 ministers in the 65-member cabinet and holds the key portfolios of finance, defense, mines, and justice. All 27 judges on the Supreme Court are Kabila appointees, and many of the country’s lower courts are controlled by Kabila allies. 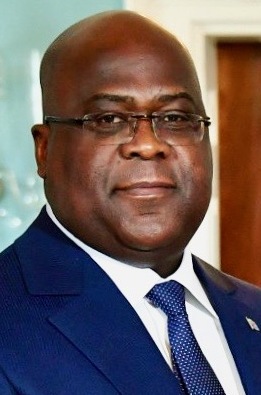 This lopsided arrangement lies in the murky power-sharing deal crafted between Kabila and Tshisekedi during a delay in announcing the election results. Their unlikely alliance converged around short-term interests: Tshisekedi wanted the presidency, and Kabila wanted influence after stepping down. While the polls brought the opposition into office, marking Congo’s first post-independence peaceful transfer of power, they were tainted by fraud and backroom deal-making. Leaked results from the Independent Electoral Commission (CENI), corroborated by an independent tally by the Congolese Catholic Bishops Conference (CENCO), showed that the real winner was Tshisekedi’s fellow opposition candidate, Martin Fayulu. He garnered 47 percent, with Tshisekedi coming in second at 24 percent. Kabila’s preferred successor, Emmanuel Ramazani Shadary garnered only 19 percent.

Kabila’s seeming setback in losing the presidency was balanced by the FCC alliance gaining near-total control of Congo’s bicameral legislature, implausibly claiming 350 of the 500 seats in the National Assembly compared to Tshisekedi’s CACH alliance, which won just 49, while Fayulu’s Lamuka coalition held the remaining 90. In the Senate, the FCC claimed 99 of 109 seats, compared to Tshisekedi’s three. FCC also secured a landslide in the provincial assembly polls, bagging 16 of 24 provinces. These results were widely seen as dubious given FCC’s failure to secure even 20 percent of the presidential vote as shown in the CENCO and leaked CENI tallies. Tshisekedi’s power-sharing deal with Kabila has been seen as a betrayal of his party’s supporters, the promise of reform, and the legacy of his late father, Etienne, who is revered as the “father” of the Congolese democratic movement.

Tshisekedi, therefore, has faced intense pressure from within his party to shift the balance of power. For months, he has sought new alliances by reaching out to the broader opposition and reformist elements of the FCC. Through the ouster of the Speaker, and the appointment of a new prime minister, these efforts are beginning to yield results.

Why This Shift Matters

The DRC has seen a proliferation of armed groups  emerge during Kabila’s tenure. These represent a host of causes from fighting government predation, ethnic rivalries, regional autonomy, and terrorism. The epicenter of this fighting is in the Ituri and South Kivu regions, involving more than 140 armed groups. The instability in the DRC has resulted in the forced displacement of over 6.5 million Congolese, making it the largest source of internally displaced persons and refugees in Africa.

While Congo’s repressive climate has eased significantly since Tshisekedi took office, a cohesive effort to address its complicated conflicts and craft a more democratic, inclusive, and accountable political system remains elusive. The FCC’s stranglehold on Parliament has frustrated him at every turn. Both houses shot down his proposals to reform the mining industry, control systemic corruption, combat human rights abuses, and gain better control of state revenues. They also rejected his plans to appoint new boards to state-owned enterprises and kept the security dockets firmly in Kabila’s hands.

“Kabila loyalists remain entrenched in the police and intelligence whose patterns of abuse remain unchanged.”

The recent parliamentary shifts and new prime minister are particularly significant considering this institutional inertia. If the arithmetic continues to swing his way, Tshisekedi could secure a new mandate to lead a comprehensive effort to reform Congo’s long neglected institutions. Efforts toward this end have begun with the DRC’s corruption-plagued and fragmented security services. In 2020, Tshisekedi removed former director of national intelligence Kalev Mutond, head of its internal security department Roger Kibelisa, former army chief General John Numbi, and General Gaston Ilunga Kampete, the former Republican Guard Commander. They have all been sanctioned for human rights violations and abuse of office.

Tshisekedi has also made numerous promotions and reassignments. However, Kabila loyalists remain entrenched in the police and intelligence services whose patterns of abuse remain unchanged. All told, far-reaching reforms are a long way off and will depend on the extent to which the balance of power, especially in Parliament, unfolds.

Similar dynamics are at play in the judiciary. In February 2020, six senior law officials were brought in to fill top court positions and serve on the judiciary’s Governing Council. However, the appointments are finely balanced between Kabila and Tshisekedi loyalists, reflecting the fierce power struggle between them. General Mukuntu Kiyana, who was retained as auditor general of the Supreme Military Court, stands accused of failing to apprehend senior officials implicated in the killing of two United Nations officials investigating human rights abuses in Kasai in 2017. 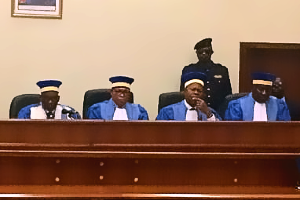 In July 2020, the Senate and National Assembly Speakers, the FCC Coordinator, and former National Assembly Speaker Jeanine Mabunda blocked President Tshisekedi’s three nominees to the Constitutional Court. They were eventually sworn in by Parliament in October, after the CACH coalition garnered the numbers to secure their confirmations. This marked yet another incremental step in Tshisekedi’s struggle to free himself from Kabila’s grip on power, with the two men now counting four judges on the Court likely to back them. The FCC, however, retains full control of CENI following the appointment in July 2020 of Ronsard Mulonda, a Kabila loyalist, as its new head.

Made by the National Assembly, the CENI appointment triggered massive protests across the country that left five people dead and injured hundreds. The Lay Coordination Committee of the influential Catholic church, which spearheaded and coordinated nearly 18 months of nationwide protests against Kabila’s failure to leave office, has channeled some of this anger. It has stepped in to mobilize other structures of civil society to “depoliticize CENI.” The marches it led against Mulonda’s appointment, which were attended by thousands of demonstrators, underscore the ongoing pressure on Tshisekedi.

If Tshisekedi fails to continue reconfiguring Parliament and using his new appointments to push forward with his promised reforms, his reputation could be damaged further. His supporters also expect him to find common ground with fellow oppositionists, including Fayulu’s Lamuka bloc, without which a solid parliamentary majority that is faithful to democratic principles and not merely a game of political control cannot be secured.

“While a working parliamentary majority will be vital, the methods of achieving it should demonstrate fidelity to constitutional principles and a commitment to democracy.”

Tshisekedi came into office with a five-year plan focusing on 13 strategic reform pillars, from justice and rule of law to anti-corruption, professionalization of the civil service, strengthening institutional checks and balances, and security sector reform. Developed through wide-ranging consultations with Congolese professionals at home and in the diaspora, independent African experts, and civil society and opposition activists, this program seeks to lay a foundation to build “a proud, democratic, and unified society” in Congo by the end of the current presidential term in 2023. “We will be making a clean break with everything that happened before I came to power,” Tshisekedi promised in April 2019.

This ambitious plan was premised on two requirements that remain elusive: unity within the broader Congolese democratic movement and a working parliamentary majority. The formidable obstacles created by the FCC’s control of the executive, judiciary, and legislature have undermined both. Furthermore, the three-way split of the opposition between Tshisekedi on one side, and Fayulu and another veteran opposition leader, Moise Katumbi, on the other, has further undermined the reform program.

To build on the momentum from the shift in the National Assembly and appointment of a new prime minister, the CACH coalition will need to reconcile with Fayulu and the larger opposition bloc. Moreover, while a working parliamentary majority will be vital, the methods of achieving it should demonstrate fidelity to constitutional principles and a commitment to democracy. A mere game of numbers and Machiavellian scheming run the risk of casting Tshisekedi in the same light as Kabila, who employed manipulative tactics to coopt opponents, weaken checks and balances, and gain undue influence over the branches of government. 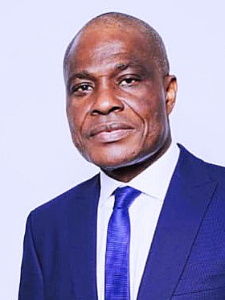 Parliament’s role as a center of gravity in Congolese politics flows from the 2003 Sun City Agreement that ended the Second Congo War. It created a political system that checks the presidency with a strong and independent legislature as a remedy for the abuse of executive power that had bedeviled Congo since independence. It also created guardrails to ensure the independence of the three branches.

Kabila weakened these provisions by coopting opponents, bribing lawmakers to defect, and issuing executive orders. Bit by bit, he increased his parliamentary numbers from 94 in 2006 to 341 in 2017. To get around the difficulty of changing the Constitution (which requires two-thirds majorities in both chambers, as well as in provincial assemblies) he simply ignored it, as shown by his refusal to organize elections when his term ended in 2016. Those same provisions that Kabila spent his entire presidency dismantling—especially those granting extensive powers to Parliament—are ironically benefiting him now. That may well be coming to an end given the ongoing realignments in Thisekedi’s favor.

Tshisekedi is seen as the inheritor of Congolese democratic aspirations spearheaded by his father who founded the DRC’s oldest opposition party, the UDPS, and led it against the kleptocratic governments of Mobutu Sese Seko, Laurent Kabila, and his son Joseph. Tshisekedi invoked this legacy in 2018 when he responded to questions regarding his inexperience by saying, “It is true, I don’t have experience in bad governance and pillaging my country, but I have experience respecting human rights and civil liberties.”

While many believe that his deal with Kabila undermined these democratic credentials, the ongoing shifts in the balance of power provide him an opportunity to reboot, reach out to opposition colleagues, and advance his reform agenda, something that has been blocked by Kabila’s grip on the country’s key institutions. While the reform movement would be in a stronger position had the opposition alliance resisted overtures by Kabila, it is now able to regain some of this momentum.

It’s important to remember that large majorities of citizens have voted for opposition candidates at both the presidential and legislative levels. This means there is strong popular backing for reform. This popular support will need to be continually harnessed to keep up political pressure for change. By doing so, reformers may be able to finally put the DRC on its long delayed democratic trajectory.

More on:  Democratic Republic of the Congo​ Democratization​