Stability in the Democratic Republic of the Congo beyond the Elections

Joseph Kabila seeks to maintain the status quo as the Democratic Republic of the Congo enters a transition amid growing instability.

President Joseph Kabila’s failure to step down when his term expired in December 2016 plunged the DRC into its worst political crisis since the Second Congo Civil War of 1998 to 2003. Since then, at least 1,200 citizens have been killed, many in extrajudicial killings by Congolese security forces for suspicion of participating in demonstrations. This has been accompanied by a 40 percent increase in human rights violations as a result of the disproportionate use of force by security forces during anti-Kabila protests. The unrest created by the political crisis has galvanized many of the estimated 70 armed groups in the DRC, some of which openly stated that they would “liberate the Congo” from a leader with no legitimacy.

Prospects that the December 30 elections will have a stabilizing effect are dim. The ruling People’s Party for Reconstruction and Democracy (PPRD) remains in control of the electoral commission, as well as all branches of government and the security services. The subservience of these institutions to the executive undermined the credibility of the last presidential polls in 2011. Their continued partisanship suggests that the outcome of the December vote will not produce the legitimacy that free and fair elections are intended to generate. Revealingly, Kabila’s preferred successor, Emmanuel Ramazani Shadary, is a hardcore loyalist with strong links to the presidential family perceived by many to be a front man through whom Kabila would control affairs until 2023 when he will be eligible to run again. Disagreements in the opposition, meanwhile, have prevented it from presenting a unified candidate, potentially fumbling a golden opportunity given that just 16 percent of voters said they would vote for Shadary.

The lack of accountability and professionalism in the security sector is at the heart of many of Congo’s troubles. The 140,000-strong Armed Forces of the Democratic Republic of the Congo (FARDC) is poorly equipped and trained, and its members often go for months without pay. To make up for the shortfall they habitually engage in predatory activities, a problem underscored by the June 2018 Final Report of the United Nations Group of Experts on the DRC, which found that criminal networks in the army continue to benefit from money laundering and mineral smuggling. The practice of allowing military personnel to plunder resources dates back to the era of strongman Mobutu Sese Seko. Mobutu kept the military weak by allocating it a miniscule budget while spending lavishly on the Presidential Guard, the real core of power during his 32-year rule. He encouraged his generals to exploit resources and citizens, telling them, “You have guns, you don’t need a salary.” The military, in return, remained loyal to him, as they had a vested interest in maintaining access to these illicit revenues. This pattern of predatory behavior by the military continues to this day.

Corruption is widespread and undermines the force’s operational effectiveness. A 2017 UN investigation found that the FARDC was the main source of weapons for multiple rebel groups, some as a result of direct sales to the groups by FARDC officers. Government soldiers in conflict zones regularly levy illegal taxes on civilians and force them to pay “protection fees” or the equivalent in food and property. They refer to the practice as “lala salama” (sleep in peace), suggesting that civilians must pay extortion in exchange for physical security. Another UN investigation in 2015 found that commanders deployed against the Allied Democratic Forces coordinated the sale of timber amid the fighting. Similarly, a 2010 UN probe into the mass rape of more than 300 civilians in the mineral-rich but restive Walikale province found that soldiers had abandoned their posts to engage in nearby mining.

The continued politicization of security sector leaders is a key concern for any new leader.

As a result of its close ties to the Kabila government, the military has failed to provide security to citizens, despite receiving billions of dollars of security assistance for professionalism and combat readiness. The consequences are dire. Today, an estimated 5.2 million Congolese are forcibly displaced. Meanwhile, with 18,000 troops on the ground and a nearly $9 billion total investment, the UN deployment in the eastern DRC, MONUSCO, continues to be one of the biggest and most expensive peacekeeping missions in the world.

The continued politicization of security sector leaders will be a key concern for any new leader. Kabila appointed staunch loyalists to top positions in the army, police, and intelligence in a leadership reshuffle in July 2018. How they might react to a new leader is unclear. Congo’s complicated security landscape will remain a major factor in stabilization efforts post-election, regardless of who emerges as the new leader. All of these new officers are on various sanctions lists for gross misconduct. Notably, army chief General John Numbi, his deputy, General Gabriel Amisi, intelligence director Kalev Mutombo, and republic guard commander Francois Olenga are all under sanctions for human rights and money laundering. Mutombo and Amisi have been sanctioned by the U.S., EU, and UK. Numbi is under U.S., Swiss, EU, and UK sanctions, while Olenga is under U.S. sanctions. According to the UN, General Amisi operates a gold mining operation and was previously implicated in the distribution of weapons to poachers and rebels.

The president’s office is at the apex of a vast patronage apparatus.

Congo’s political system functions much in the same way it did during Mobutu’s rule and that of Joseph Kabila’s late father, Laurent. The president’s office is at the apex of a vast patronage apparatus built on formal and informal networks from the federal level down to provincial and local governments. The office is alleged to be engaged in widespread rent-seeking and diversion of state resources. An estimated $4 billion was looted under Mobutu—a cycle continued by the Kabilas. In 2015, Luzolo Bambi, then Kabila’s anticorruption advisor, said that $15 billion was lost annually due to fraud. In his previous role as justice minister, he initiated several wide-ranging measures to root out graft and incompetence in the judiciary, but uncooperative prosecutors kept them from bearing fruit. A Pulitzer Center study found that the president’s family and their allies controlled as many as 80 companies with stakes in almost every sector—from banking and real estate to mining, telecommunications, and agriculture—bringing in hundreds of millions of dollars annually.

Access to these revenues have enabled members of the regime’s inner circle to coopt opponents and officials in the judiciary, legislature, and other key institutions such as the electoral commission.

Similar patterns of human rights violations and patronage are seen among senior civilian officials in the Kabila government. Shadary is on the EU sanctions list for ordering the violent repression of demonstrations when he oversaw the security and internal affairs dockets. The governors of Kasai Central and Haut Katanga and Vice Prime Minister Gideon Mutanga are under EU sanctions for planning, directing, or committing human rights violations.

Kabila seems intent on maximizing the levers to the levers to power that he can wield out of office by tightening his grip on the state machinery. He secured the newly created position of party president, giving him significant influence over the government’s decision-making under a PPRD administration. He also placed three staunch allies in the nine-member Constitutional Court to replace justices that had retired. The 27-judge Supreme Court is similarly packed with loyalists. During the July reshuffle, the PPRD-dominated parliament passed a law granting Kabila immunity from prosecution, a state house, a diplomatic passport, bodyguards for life, and 50 percent of his presidential salary.

The meticulous planning that Kabila has undertaken to retain influence after elections reveals his interest in preserving the status quo. This sets up a conundrum for the DRC, as most Congolese believe that fundamental reforms in governmental authority are needed to reverse the country’s escalating instability. 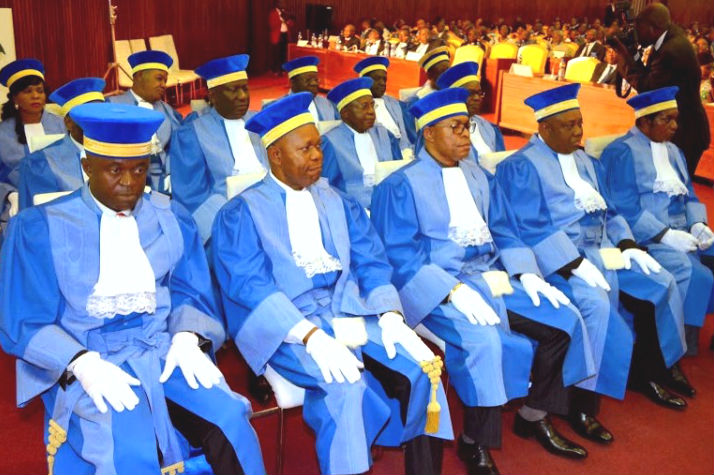 The institutions that should safeguard Congo’s resources and check the executive—especially the courts and parliament—are themselves severely compromised and unable to deliver on their mandates. Restoring their independence is imperative if the next government is to break from the current trajectory and deliver real change for the country.

The period of institutional strengthening between 2006 and 2009 when the legislature emerged as an important check on the executive provides a relevant precedent. During this period, the National Assembly conducted 43 independent investigations leading to the sanctioning of ministers and reallocation of expenditures. For its part, the Senate oversaw 28 independent investigations that prescribed remedies for numerous instances of misconduct by the executive branch. While parliament eventually lost its independence due to executive interference, the case demonstrates the feasibility of establishing autonomous branches of government in the DRC.

Regional organizations—in particular the Southern African Development Community (SADC) and the African Union (AU)—will also need to live up to their obligation to uphold the principles of checks and balances in the DRC if instability is to be reversed. SADC was the guarantor of the Sun City peace process that led to the establishment of the fledgling independent institutions in the DRC in 2003. The role SADC played in its subsequent implementation demonstrates the value that principled and consistent engagement by outside actors can bring to keeping reforms on track. This will undoubtedly be critical going forward, as major change is needed if the DRC is to change course and achieve the security and accountability that will enable Congo to channel its vast wealth into meaningful development.

More on:  Democratization​ Democratic Republic of the Congo​