Confrontations between Hema and Lendu youth in the Democratic Republic of Congo’s northeastern province of Ituri erupted in December 2017 and escalated into tit-for-tat attacks that quickly spread throughout the province. More than 70 villages have been destroyed, and an estimated 350,000 people have sought refuge in neighboring Uganda or been internally displaced. In July 2018, the United Nations High Commissioner for Refugees (UNHCR) said its teams had heard reports of armed groups conducting mass killings and razing entire villages. 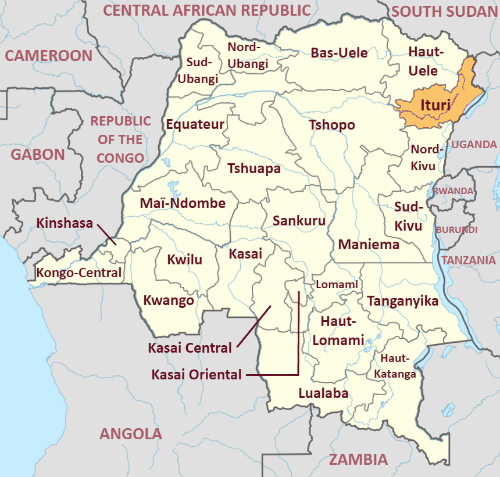 This outbreak of violence mirrors growing instability observed in various parts of the DRC since President Joseph Kabila controversially extended his stay in office past the constitutional mandate of December 2016. It has also shattered the peace settlement created by the Ituri Pacification Committee in 2003 that was once seen as a model for peacebuilding in the DRC.

The return of crisis in Ituri is particularly alarming because during the Second Congo War (1998-2003), the province was the epicenter of the deadliest fighting in the country, killing an estimated 50,000 civilians and displacing over 500,000.

While the origins of the latest fighting are unclear, the patterns are similar to those seen previously, suggesting that the root causes were never extinguished. These include the instrumentalization of ethnic identities by those arming the Hema and Lendu militias, forced land removals by these militias in mineral-rich areas, and the deliberate targeting of civilians along ethnic lines. As the situation continues to deteriorate, there is a risk that the violence could again spread to neighboring countries and potentially draw them into Congo’s complicated conflicts.

How Ethnicity Is Instrumentalized

Ituri’s plains, rich in oil, timber, gold, diamonds, and coltan, have been the scene of longstanding disputes between Hema pastoralists and the agriculturist Lendu. The Lendu population is between 750,000 and 1 million, with farming as their traditional economic activity. The Hema, which number from 300,000-400,000 people, control most of the plantations and ranches left behind by Belgian settlers. Over time, they expanded their landholding, grazing, and large-scale ranching in Djugu in the north, Irumu in the south, and along Lake Albert in the east by enlisting the support of local and national authorities. The demand for greater access to land for ranching and farming, rapid population growth, and decreasing land fertility and availability have been at the center of the tension between the two communities.

The demand for greater access to land for ranching and farming, rapid population growth, and decreasing land fertility and availability have been at the center of the tension between the Hema and Lendu communities.

Prior to Belgium’s annexation of the region, these disputes were resolved by local mediation councils that regulated grazing rights and seasonal migrations, allocated resources, and coordinated community security. The Hema and Lendu share a common dialect and are linked by intermarriage and common customs and traditions. The Belgian colonialists, however, elevated the status of the Hema at the expense of the Lendu, enabling them to expand their land holdings, providing access more educational opportunities, and giving them greater representation in the local administration. This policy continued when Mobutu Sese Seko seized power, creating deep socioeconomic cleavages in the region. However, traditional Hema and Lendu mediators retained their respect and influence among the two communities due to their impartiality. Their rulings were always binding and final.

As more resources were discovered in the area, Ituri became increasingly militarized. Local elites and Kinshasa-based politicians and businessmen began to arm Hema and Lendu militias in a bid to control its vast mineral wealth and territory. The tensions grew worse, with armed violence erupting in 1975 and again in 1991.

As more arms continued to flow in, young Hema and Lendu fighters no longer felt the need to subject themselves to the authority of traditional mediation councils, weakening Ituri’s indigenous mechanisms of conflict management. In addition, those who financed these militias used ethnic incitement to recruit more fighters and mobilize their bases of support along ethnic lines. Thus, Hema and Lendu identities became central to the larger conflict narrative, and the two communities then began to view one another as a threat to each other’s way of life.

Eventually, another layer was added to this explosive mix: regional meddling. The violence in Ituri during the Second Congo War was far worse than that experienced in 1975 and 1991. During this war, Rwanda, and especially Uganda, were accused of arming Ituri-based militias, initially as part of their joint campaign against the DRC government and later as proxies after ties between the two former allies broke down. After several rounds of fighting, Ugandan forces remained encamped in Ituri, gradually expanding their presence and eventually controlling the regional government based in the capital, Bunia. The Hema and Lendu also have kinship ties to ethnic groups in Uganda, and UN investigators have in the past blamed local Ugandan commanders for worsening the conflict by using these cultural affiliations to strengthen their military positions, and pursue illicit wealth in Ituri. 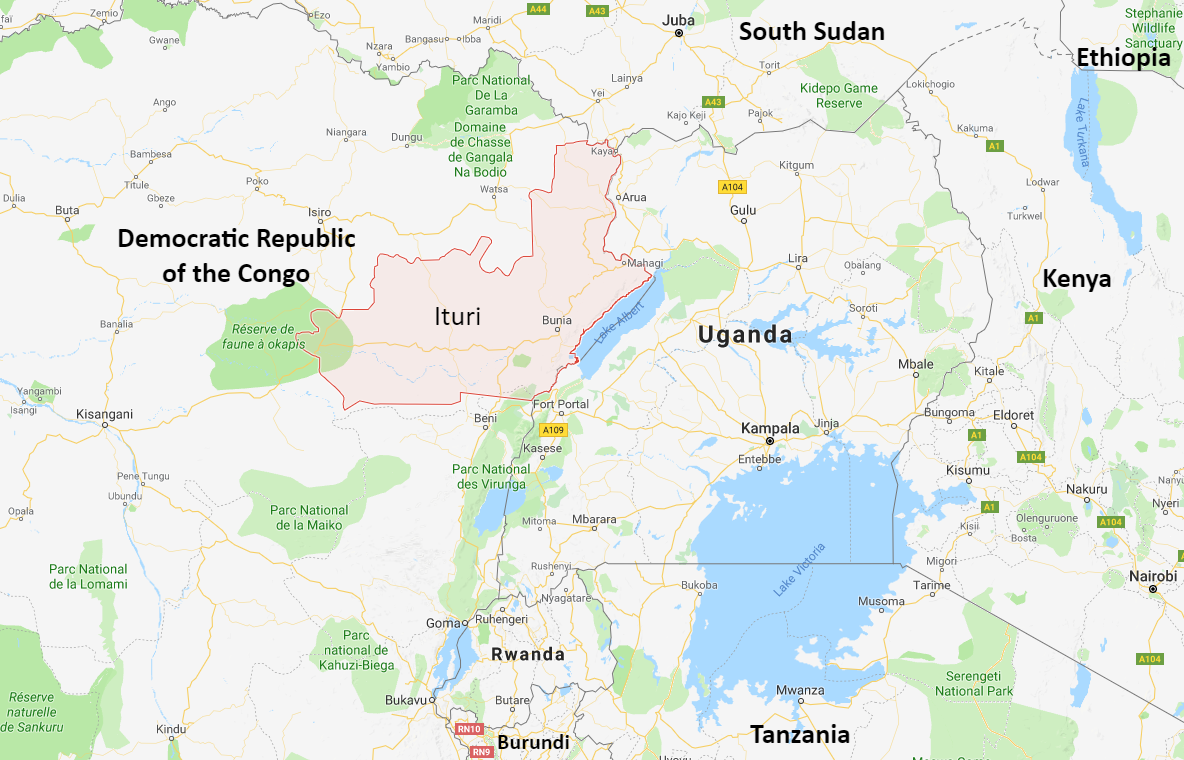 Despite the superficial focus on ethnicity, the Ituri crisis is essentially a political one. At its heart, there is a struggle for power between Hema and Lendu elites and efforts by them, and their Kinshasa-based allies, to control the region’s administration and resources.

Launched in 2003 with the support of the international community, the Ituri Pacification Committee (IPC) attempted to settle the violence that had erupted in Ituri during the Second Congo War by simultaneously addressing the external and internal dimensions of the crisis. It was part of a UN plan to establish an ethnically balanced administration that could be a catalyst for reconciliation. Angola and Uganda, which were involved directly as combatants in the war, sat on its preparatory committee alongside representatives of the militias and the DRC government. A ceasefire negotiated as part of this process led to Uganda ending its occupation of Ituri, relinquishing its authority in Bunia, and withdrawing its forces. This paved the way for the establishment of the Ituri Interim Administration, whose main features included:

This Administration enjoyed the support of Ituri’s communities. Local councils were established to arbitrate land claims, especially in the volatile Djugu and Irumu territories—some of the most fertile and resource-rich highlands in Congo and among the most densely populated. These local councils, consisting of respected Hema and Lendu elders, managed disputes using “shared commons,” a principle at the core of Ituri’s traditional dispute resolution practices. To further reinforce these efforts, an accord was signed in Dar es Salaam, Tanzania, in 2003 that committed Uganda and Kinshasa to support the Ituri peace process. Uganda also agreed to refrain from undertaking further military activities in the region.

The stabilization process was not without setbacks, however. As Ugandan forces withdrew, heavy fighting broke out between Hema and Lendu militias battling to control Bunia. In an attempt to quell the violence, the European Union military operation in the Congo, also known as Operation Artemis, deployed a 4,000 strong rapid reaction force to Bunia and other locations in May 2003. The improved security situation enabled MONUC to oversee the demobilization and disarmament of these militias, which created a more conducive environment in which the Ituri Interim Administration could expand its local peace initiatives. The demobilization process was further supported by multiethnic community security forums overseen by the Administration.

Such processes, coupled with timely international engagement helped bring back stability to Ituri and kept the region relatively calm for the next 15 years—until violence erupted again in December 2017.

An aerial view of hills in Ituri. (Photo: MONUSCO)

Reclaiming the Lessons from the Ituri Pacification Process

The Ituri Interim Administration was an innovative attempt to resolve a highly complex set of conflicts. According to one observer, “The people who were part of it were from different ethnic groups. … They were listened to and had a lot of influence. … Moreover, it was clear from the beginning that the president could be neither a Lendu or Hema, and so an Alur woman was chosen as leader.”

Thanks to these innovations, Ituri remained largely stable even after the central government dissolved the interim administration barely two years after it had been established. It was perceived by some national politicians to be hampering Kinshasa’s authority. There is a widely held view that Ituri’s special institutions should have been expanded to lay a firmer foundation for stability and used as a model to resolve similar conflicts in the rest of the country. As international interest in supporting the Ituri framework waned, in part because violence had diminished, local and national politicians began to once again hold sway. As a result, arms began to once again flow into the region as these elites sought to create and finance militia groups to exploit the region’s resources.

As anger and uncertainty grew over Kabila’s refusal to respect term limits, some of these groups began to launch deadly attacks on government facilities.

As anger and uncertainty grew over Kabila’s refusal to respect term limits, some of these groups, such as the Lendu-dominated Nationalist Integrationist Front, began to launch deadly attacks on government facilities, including the National Electoral Commission, as well as civilians. Given that the legitimacy of the central government has always been tenuous in Congo’s peripheral areas, a solution to the latest crisis in Ituri will greatly depend on progress in finding a settlement at the national level.

Lessons from the Ituri pacification process will be central to any peace agreement going forward. First, inter-group reconciliation should be at the core of stabilization efforts. It is noteworthy that even after the Ituri Interim Administration was disbanded, the traditional mediation councils remained active throughout the province and contributed greatly to building community resilience and stability. Second, ethnic incitement should be quickly sanctioned as it can be instrumentalized into a major driver of deadly violence in the province. Finally, mechanisms should be created to create incentives for regional neighbors to play a constructive role in stabilizing Ituri rather than stoking the conflict for their own ends.