Sharp losses by the long-ruling NRM party reveal a shifting political landscape in Uganda, reflecting the will of a younger and more energized electorate looking for change.

Uganda’s 2021 presidential election yielded more confusion than clarity following a violent runup, an internet shutdown, and a host of voting irregularities. What is clear is that popular support for the long-ruling National Resistance Movement (NRM) has diminished dramatically.

Officially, Uganda’s Electoral Commission (EC) declared President Yoweri Museveni the winner of the January 14 election with 58 percent of the first-round vote. This outcome would extend Museveni’s 35-year rule for a sixth term.

Museveni’s NRM lost seats to the leading opposition party by a lopsided margin throughout much of the country.

This result is widely seen as implausible, however. Museveni’s NRM lost seats to the leading opposition party, the National Unity Platform (NUP), by a lopsided margin throughout much of the country in parliamentary and local government elections. This includes 25 out of 30 cabinet ministers losing their parliamentary seats. The margins may increase further if the several dozen petitions before the lower courts are resolved in the NUP’s favor. Opposition parties had held just 57 of 426 seats in Uganda’s unicameral parliament previously.

Determining the actual tally of the vote has been elusive. A day before the vote, the internet was shut down, raising questions about how results from the 34,344 polling stations would be transmitted. With biometric equipment failing due to the disruption, the EC directed its staff to “put the machines aside” and resort to manual counting. The EC has subsequently failed to display the Declaration of Results (DR) forms from each polling station as required by law, instead announcing results by region. EC Chairman Simon Byabakama explained the decision by saying, “A presidential election has only one constituency, the whole country.” 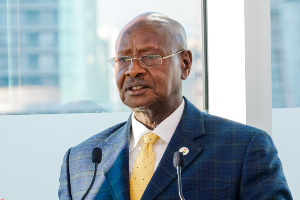 The electoral environment leading up to the vote was also marked by intimidation and violence. Over 50 people were killed during protests over the arrest of Museveni’s main opponent and NUP leader, 38-year-old Robert Kyagulanyi Sentamu, a.k.a. Bobi Wine. He was shot at by security forces, arrested multiple times, and prevented from holding rallies.

After polls closed, security forces prevented Wine from leaving his house or receiving visitors for 11 days, until a High Court ruling deemed the siege illegal. In the period since the election, over 200 officials of his NUP party were incarcerated, many in military facilities. Video footage of soldiers abducting civilians, breaking up rallies, and even taking over the administration of voting stations have filled social media.

Many opposition monitors have gone into hiding as security forces mounted searches for DR forms to confiscate. The forms, which polling agents of all parties are legally entitled to retain for verification purposes, are key to substantiating the official results. A week after the vote, the EC pulled down the official results from its website following growing signs of irregularities.

Making Sense of the Electoral Results

A key element of reconstructing the electoral totals will be the findings of parallel vote counts.

Given the partial results and the disrupted nature of the election and post-election environment, ascertaining an accurate picture of the results is challenging. Lawyers affiliated with the Uganda Law Society provided documentation to the EC on December 9 and January 5, detailing systemic irregularities. The Presidents of the Law Societies of Burundi, Kenya, Rwanda, Tanzania, and Zanzibar collected additional evidence. They accused the Uganda government of violating the democracy clauses of the East African Community Treaty and have threatened to take the government to court. On February 1, the NUP petitioned the Supreme Court to nullify the election due to the irregularities and the institutionalized bias of the electoral process. 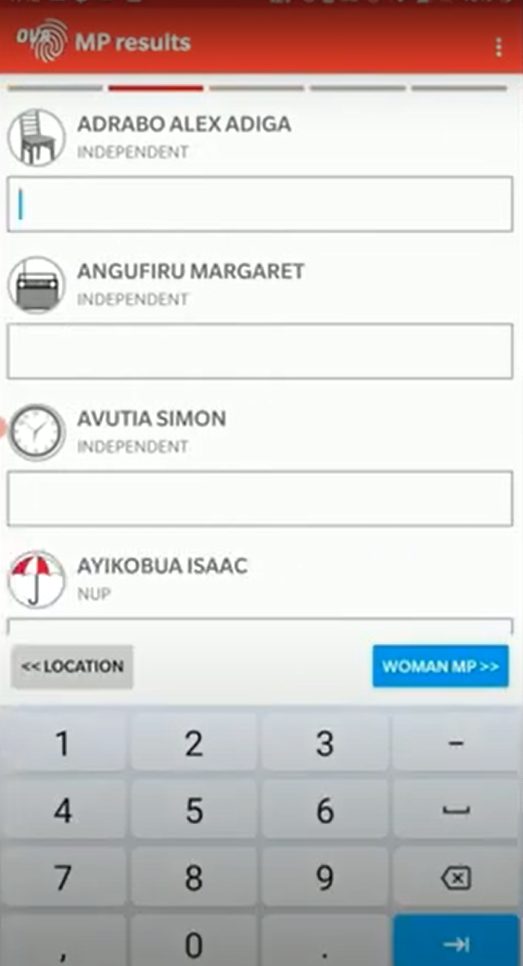 Media reports have helped fill gaps in the narrative. While reporting was initially muted because of the internet shutdown, once communications were restored, incidents of ballot stuffing, pre-marked ballots, forgeries, bribery, and inflated voter rolls were revealed, generating further public outcry. Opposition candidates are demanding a comprehensive, internationally supervised audit of the presidential elections and public display of all DR forms as required by the Electoral Code.

A key element of reconstructing the electoral totals will be the findings of parallel vote counts. Two separate software apps, Open Vote Africa and U-Vote, enabled domestic monitors, voters, and party agents to transmit unaltered DR forms to secure servers for independent compilation and tallying. These apps were publicized by Ugandan media as part of an intensive awareness-raising campaign so that citizens could independently report their votes to defend against potentially incongruent official results. This parallel vote count organized across Uganda’s polling stations thus represents a paper trail that may validate or shed light on inconsistencies in the official results. This documentation, along with the irregularities noted in the previously filed petitions, are expected to be considered by the Supreme Court.

The Ugandan bench has tended to use the criterion of ‘overwhelming evidence of disparities in tallies’ when considering electoral petitions rather than weighing the electoral process as a whole. Drawing on the precedents of recent elections in Kenya and Malawi, where fraudulent votes were rejected by the courts, the opposition legal team hopes to persuade judges to also consider the hostile electoral environment. Despite the unlevel playing field, the evidence currently in the public domain undermines the credibility of the EC’s claim of a clear-cut Museveni victory.

The implications from the NRM’s losses are still sinking in. The NRM has suffered its worst electoral defeat since it came to power despite the widespread irregularities. For the first time, Museveni lost his traditional stronghold of Central Uganda (Buganda), which is the most populous region and the core of Ugandan politics, economy, and culture. It is sometimes described in the local vernacular as the “mawuggwe” (lungs) of the NRM, without which it cannot breathe. For the first time, the NRM also lost Busoga, the economic center of Eastern Uganda. Both regions, which account for 60 percent of the electorate, voted NUP. NRM invested heavily in keeping Buganda and Busoga on board, directing the largest share of capital and labor-intensive projects to these regions. Their shift away from Museveni suggests that deeper underlying grievances are at play.

The NUP, which was initially written off as having no appeal outside the informal settlements of the so-called “Bayaaye” (“rebellious hoodlums”), also gained total control of Greater Kampala and its suburbs. Combined with the sweeping of Buganda and Busoga, the NUP has gained control of local governments where three quarters of Uganda’s population, 80 percent of the economy, 90 percent of the middle class, and critical NRM rural strongholds are located.

NUP also took full control of the rural bastion of Luweero, the NRM’s “mecca” where the NRM’s guerrilla war was based. It is sometimes called the “omutima” (heart) of the NRM, without which it loses its soul.

“The truth is we have overstayed; that is why some of us lost. The people are simply tired.”

Over half of the NRM lawmakers that voted to lift age limits that allowed Museveni to run for a sixth term lost their seats in what some pundits are calling an “NUP Tsunami.” The NUP is poised to go from not being represented in Parliament to becoming Uganda’s new official opposition, or—depending on the results of the many petitions before the courts—the majority. In either case, the NUP will have control of numerous powerful parliamentary committees, as well as be represented in the Pan-African and East African Parliaments.

Several factors explain these shifting dynamics. First, although the NUP was formed less than a year ago, its social origins lie in the People Power Movement that was born in informal settlements and appeals to Uganda’s most dynamic demographic: 78 percent of the population are under 35—including 8 million between the ages of 18 and 30. Meanwhile, youth unemployment is estimated to be near 70 percent. Second, Museveni’s longevity has triggered widespread discontent, including among the middle class and his traditional strongholds. Third, the NRM’s escalating tactics of repression and violence over the past decade have alienated previously loyal constituencies and chipped away at the regime’s support base over time.

These shifts in Uganda’s politics were put in stark terms by Museveni’s former Principal Private Secretary and NRM heavyweight Amelia Kyambadde, who said, “The truth is we have overstayed; that is why some of us lost. The people are simply tired.” 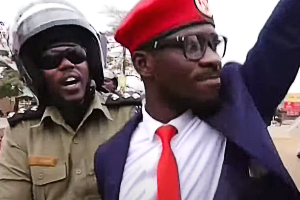 Museveni’s failure to respect term limits is at the heart of Uganda’s growing instability. It has loosened constitutional guardrails, damaged checks and balances, entrenched patronage networks, undermined military professionalism, and instilled a culture of violence and repression predicated on winning elections at all costs.

This determination to cling to power has blocked internal challengers and created factions within the NRM. The growing politicization of the Uganda People’s Defense Forces and its institutional roots as the armed wing of the ruling party mean that soldiers will likely continue to be drawn into these power struggles, heightening the risk of more instability.

Reformers are pushing an alternative vision to achieve the democratic society laid out in Uganda’s 1995 Constitution, which many Ugandans, notably the youth, are championing. The grievances they mobilize around were initially confined to the poor neighborhoods, where a new political consciousness seeking to take Uganda in a different direction has crystallized.

Gradually, however, the forces championing this vision have expanded to tap into the generalized fatigue with the status quo. Indeed, many believe that had all the votes been fairly counted, the NRM’s losses would have been much greater.

Even with the current tallies, the NRM is on the defensive, and will need to reach out to the opposition and civil society leaders if it is to govern effectively. The NRM, thus, faces stark choices in the wake of these realities: continue its current path and risk more instability or steer Uganda back toward a democratic trajectory.

The NRM is on the defensive, and will need to reach out to the opposition and civil society leaders if it is to govern effectively.

Navigating the crisis will hinge on regaining a measure of public trust. This can be advanced by a judicial petition that is seen as fair and free from executive interference, an independent audit of the election results, and accountability for the violence committed against opposition supporters. The NRM will also be under pressure to enact previous rulings by the Supreme Court mandating reforms aimed at creating an inclusive and equitable political process. The NRM will also be expected to demonstrate that it is willing to ensure a peaceful transition of power as called for in Uganda’s Constitution, including the reintroduction of term limits.

The NUP and its allies remain committed to exhausting legal and constitutional avenues even though the party has little confidence in the judiciary, which is tightly controlled by the NRM. Nonetheless, it has used the electoral process to expose the NRM’s undemocratic behavior, document irregularities, and articulate alternatives.

With its new mandate, the NUP can continue to apply pressure on the NRM, force concessions, and expand constitutionalism. High on its legislative agenda is the reform of Uganda’s security services based on instructions issued by the Supreme Court after the 2016 elections that were never implemented. This will be key given that the public increasingly views the security services as a tool of coercion rather than a means of protection. Reforms would need to reverse the corrosive effect of growing politicization on the professionalization of the security services, particularly the military.

Post-election Uganda, in short, will need to navigate treacherous unchartered waters. To do so effectively will require a new governance model that recognizes the need for dialogue and accommodation.