Resource Mismanagement a Threat to Security in Africa

Resources are always limited, even for advanced countries, but the problem in Africa is not resources per se. The problem is their misuse.

The President had finally signed off on a high-value procurement of main battle tanks and sophisticated anti-tank weapons as part of an aggressive military modernization program. Shortly thereafter, an intense political crisis erupted, leading to a full-blown rebellion and the defection of several army divisions. Insurgents seized a sizeable amount of territory and a general state of chaos ensued. As a now-fractured army struggled to take back territory, the leadership realized that their country had not benefited from its new tanks, as they were ill-suited to fighting the more lightly armed but determined and highly mobile insurgents. The tanks were ultimately a costly waste—and one that still had to be paid for and maintained.

Although hypothetical, this story is very real in parts of Africa, where armies may not only make the wrong strategic decisions regarding military budgeting, procurement, and security resources, but they may also take advantage of them for personal gain. “Resources are always limited, even for advanced countries, but the problem in Africa is not resources per se. … The problem is their misuse,” notes Assis Malaquias, Professor and Academic Chair, Defense Economics and Resource Management at the Africa Center for Strategic Studies.

Dr. Malaquias leads the Africa Center’s Managing Security Resources in Africa (MSRA) Program, which is bringing together 60 African security sector leaders from 16 countries across West Africa to Cotonou, Benin, to discuss these issues in September. “When planning with the mindset that the army is a tool for personal wealth creation, temptations to inflate budgets and acquire capabilities that are not suited to the country’s security realities are strong and the consequences can be deadly as we have seen repeatedly,” he warns.

Jakkie Cilliers of the Institute for Security Studies contends that these problems run much deeper than the mere lack of resources. “If you have waste, misallocation, and ultimately low morale, it washes across everything else.”

A question of who African militaries serve

A military uniform still bestows an image of power, prestige and legitimacy. It can also be misused to cover up, or even justify, unethical practices.

The colonial experience bequeathed Africa with militaries that were organized to protect the regimes in power, not African citizens. This legacy continues to varying degrees on the continent. A military uniform still bestows an image of power, prestige and legitimacy. It can also be misused to cover up, or even justify, unethical practices, notes Malaquias. Moreover, the military represents a government’s legitimate control of coercive instruments. It may also draw on classified budgets—fertile ground for unethical conduct.

All this occurs in a general climate where discussion of national security issues and demands for accountability are often viewed as a danger to public safety and therefore punishable. Outside the military, the institutions that are supposed to combat corruption and oversee defense budgets are often weak, a problem compounded by the generally poor relationship that the security services have with other branches of government. All these factors, explains Malaquias, provide an environment where opportunities for using the army to build personal wealth thrive.

Waste and its deadly consequences

Ideally, the size, equipment, and posture of the military are determined by a threat assessment, itself a product of a national security strategy development process. A discerning assessment curbs waste because it matches resources to the nature of the threat, which in turn guides procurement.

Too often, however, national security assessments are non-existent, poorly done, or, suffer undue influence, says Len Le Roux, a former senior manager at the Institute for Security Studies. As a result, procurement and posture are misaligned to threats and this leads to waste and a decline in effectiveness as troops remain poorly equipped to handle the threats they face. 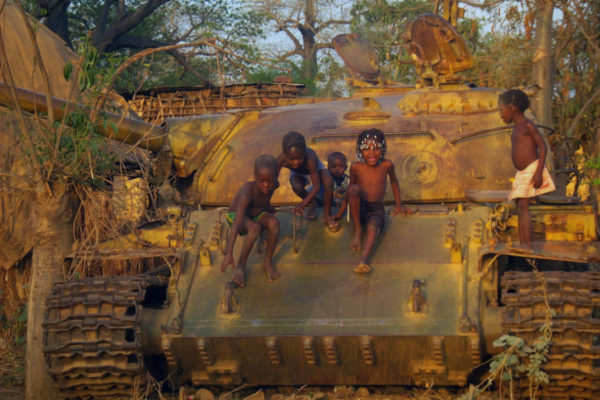 At worst, it causes fatalities that could have been avoided if the national security strategy process had been more professional and rational. The “resource-threat” mismatch can lead to long-term structural problems. Emile Ouédraogo, a former member of Burkina Faso’s Parliament and retired colonel, notes that African security threats are largely internal, rooted in nonmilitary causes, and asymmetric in nature. However, African militaries are trained and postured to meet conventional threats. Nonetheless, investments in very expensive but ill-suited materiel and training continue, leaving troops unprepared in the field, warns Ouédraogo.

Changes in attitude and corresponding reforms are needed if more accountable governance and professional armies are to take root. Some noteworthy practices toward this end are emerging. In Botswana, strong parliamentary oversight and healthy civil military relations have kept defense expenditures and procurement in public view. In 1987, a whole of government national security strategy development process identified wildlife poaching as a top national security threat that undermined Botswana’s long-term economic development, conservation objectives, and security. Furthermore it found that poaching was linked to other threats, such as illicit finance and drug and human trafficking. The Botswana Defense Force was redesigned to meet these complex threats in ways that have responded to the country’s unique needs, aided by Botswana’s longstanding tradition of accountable governance and strong and accessible institutions.

Sierra Leone, in 2005, embarked on one of the most comprehensive, transparent, and accountable defense reform programs in the developing world, leading to a national security strategy that emphasizes the link between security and development and aims to avoid a repeat of the country’s 1992–2002 civil war. The military was repurposed to respond to external threats and peace support operations abroad. Training and equipping of the police was bolstered to respond to manifestations of internal conflict as identified in a comprehensive threat assessment. Civil society provided inputs at each step, and today, Sierra Leone has a layer of accountability and oversight mechanisms throughout its security sector that have contributed to preventing another deadly conflict.

Effectively managing security resources requires four elements: rational and professional threat assessments, commitment and will to address legacies of misrule, accountable governance, and strong oversight mechanisms within the national security strategy making process. All of these provide an environment in which military professionalism and the ethical management of security resources can take root.