Armed conflicts in Africa have substantially declined from their peak in the early 1990s. The 12 ongoing conflicts represent a 35 percent drop from two decades ago. This downward trend can be attributed to a variety of factors. One of these has been the greater willingness to deploy peacekeeping missions in Africa. Since 2000, more than 40 United Nations (UN), African Union (AU), and other UN–authorized missions have been deployed to the continent. This pattern reflects several developments:

A Move from Non-Interference to Non-Indifference

African countries contributed only 10,000 troops to UN operations in 2000 when the AU was established. By 2017, some 18 African countries had contributed approximately 80,000 military, police, and civilian personnel to UN and AU missions, making Africa the largest contributor to global peace operations. Today, African forces represent 50 percent of all UN peacekeepers.

The AU has deployed eight operations of its own during this time, including to Burundi (AMIB), the Central African Republic (MISCA), the Comoros (AMISEC and MAES), Mali (AFISMA), Somalia (AMISOM), and Sudan (AMIS I and II). It has also deployed specialist task forces to combat the Lord’s Resistance Army in Central Africa and Boko Haram in Nigeria, Chad, and Cameroon.

This increase in AU peacekeeping is a departure from the operating norm of its predecessor, the Organization of African Unity (OAU). Under the OAU, the principle of “non-interference” prevailed with regard to political and humanitarian crises. Recognizing the devastating effects of prolonged conflicts on Africa’s stability and development, the AU replaced the standard of non-interference with the principle of “non-indifference.” This principle asserts the right to intervene without host government consent in grave circumstances, including war crimes, crimes against humanity, and genocide. Peacekeeping and peace enforcement have emerged as vital instruments in this regard.

The Region Often Takes the Lead 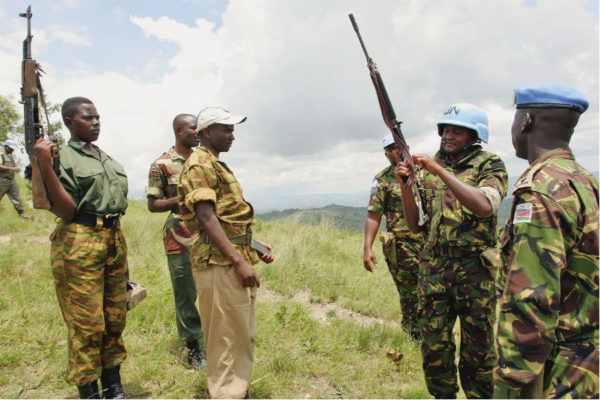 AU forces have enforced ceasefires, protected civilians, and created conditions for political reform. In Comoros, they toppled a renegade military government on Anjouan, an autonomous island that forms part of the Union of the Comoros. This was the first-ever AU effort to remove a recalcitrant leader. In 2017, the Economic Community of West African States (ECOWAS) was prepared to intervene in Gambia to remove Yahya Jammeh and install his democratically elected challenger, Adama Barrow. The AU has also deployed AMISOM, AFISMA, and the multinational task forces combating the LRA and Boko Haram in counterterrorism and counterinsurgency roles.

As a rule, African states take the lead in deploying forces through the AU’s regional blocs or through ad-hoc “coalitions of the willing.” This is often through the auspices of the African Standby Force and its regional brigade mechanisms—all part of the African Peace and Security Architecture. After stabilizing crisis situations, AU forces sometimes transition into “hybrid AU/UN” missions, such as the African Union–United Nations Mission in Darfur. In other cases they will be “rehatted” into full UN missions such as the UN Operation in Burundi (ONUB) that succeeded AMIB, the UN Multidimensional Integrated Stabilization Mission in Mali (MINUSMA) that replaced AFISMA, or UN Multidimensional Integrated Stabilization Mission in the Central African Republic (MINUSCA) that followed MISCA.

Peacekeepers helped end hostilities in Angola, Burundi, Côte d’Ivoire, Liberia, Mozambique, Sierra Leone, and Sudan, among other situations. In each case, an enforced ceasefire reduced civilian deaths, which enabled the pursuit of peace agreements in a climate of lowered tensions.

Peacekeepers also create a conducive environment for external actors to pursue stabilization programs. In Liberia, for instance, a U.S. effort to build an entirely new army would have been impossible without the deployment of an ECOWAS and later a UN mission. Similarly, AMISOM’s success in regaining control of population centers, including Mogadishu, from Al Shabaab enabled the February elections in Somalia—the first since the collapse of central authority in 1990—which have contributed to the rebuilding of the government. 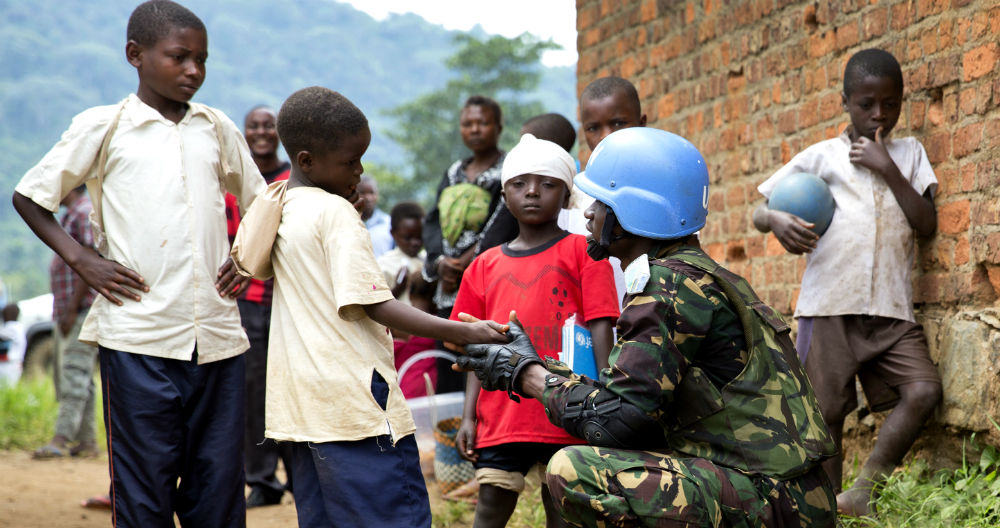 A member of the Tanzanian contingent of the Force Intervention Brigade (FIB), UN Organization Stabilization Mission in the Democratic Republic of the Congo (MONUSCO) (UN Photo/Sylvain Liechti)

Commitment to the Responsibility to Protect

Since 1999, when the UN Security Council first defined its mission in Sierra Leone to “protect civilians,” most UN and AU missions have been tasked with this mandate. The emphasis on protecting civilians emerged from a growing recognition of the human cost of war (over 6 million Africans have died from conflicts since 1990) and the international commitment to the Responsibility to Protect.

Peacekeeping missions—from Darfur and eastern Congo to Somalia—have helped to reduce civilian deaths by separating combatants, establishing safe areas for civilians to take refuge, preventing armed groups from attacking villages, and even simply patrolling communities so that combatants knew their actions would be noticed. Nonetheless, these efforts have not always been successful, and when peacekeepers fail to implement their mandates to protect civilians, as they have in the Democratic Republic of the Congo and the Central African Republic, peace and stabilization efforts falter. Moreover, when the international community fails to respond to a crisis with such a deployment, mass atrocities continue or even increase. While most peace operations deploy after a peace agreement has been reached, the peace is often fragile, and a failure to successfully implement a mandate can cause conflict to resume or worsen, despite the existence of a nominal peace agreement.

Peacekeeping missions have helped to reduce civilian deaths by separating combatants, establishing safe areas for civilians to take refuge, preventing armed groups from attacking villages, and even simply patrolling communities so that combatants knew their actions would be noticed.

The current crisis in Burundi illustrates how the AU, when it reversed its decision to deploy a prevention force with an explicit mandate to protect civilians, has failed to deter mass atrocities through diplomacy alone or create an enabling framework for negotiations. As matters currently stand, peace talks are struggling to take off, mass atrocities have spiked, and public pressure for external actors to directly intervene is mounting. The ongoing conflict in South Sudan has also been met with calls for a more robust peacekeeping mission, along with the imposition of an arms embargo and further targeted sanctions.

Achievable Mandates and Sufficient Capabilities to Achieve Them

As mandates have increased in scope and complexity, the resources and capabilities provided to missions have not always matched those requirements. Recent efforts to evaluate UN missions highlight a need to better align resources with mandates. But almost two years after these reviews were completed, and with only few of their recommendations implemented, Security Council members, troop contributing countries, as well as AU and UN officials need to commit to implementing the necessary reforms. In particular, missions with so-called offensive mandates, such as those in DRC, Mali, and Somalia require not only the materiel needed to perform these tasks (such as aircraft and armored vehicles), but also intelligence collection and analysis and troop-contributing contingents that are able to perform these tasks.

Part of a Political Process

Effective peace operations form part of a larger political strategy where the immediate goal is to save lives and generate stability so that political solutions can be pursued. For instance, AMISOM’s civilian component coordinates political, humanitarian, gender, and civil affairs. It also supports the Somali government’s stabilization plan. This reflects the AU’s view that battlefield successes, although crucial, are not sufficient. Ultimately, Al Shabaab can only be defeated if the Somali government provides good governance and improved security and socioeconomic opportunities to its citizens in the long run. Recognizing this, UN missions increasingly have mandates that range from supporting the organization of elections to reforming police forces and building judicial capacity. 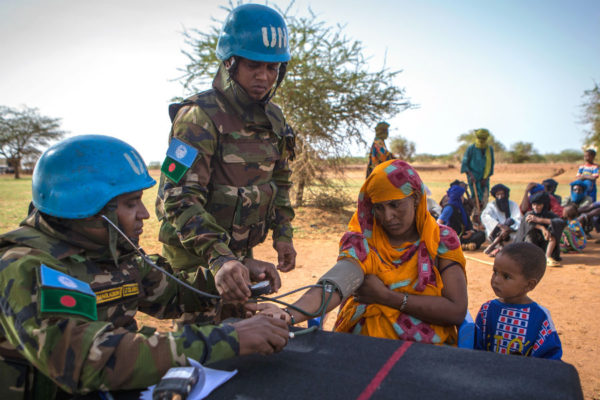 AU and UN missions also depend heavily on diplomacy, sanctions, regional coordination, and inclusive dialogue between protagonists. External actors should therefore be mindful about what peacekeepers can realistically achieve on their own. But while mandates have become clearer and the resources to implement them have increased, missions cannot succeed without active diplomacy and political will from regional and international partners. While analyzing the causes of these failures can help focus the policy debate toward improved performance, it is important to ask what such situations would have looked like in the absence of peacekeepers.

African peace operations have saved lives, built capacity in both troop contributing and host nation countries, fostered stabilization, and reduced incentives for conflicts to become more protracted. Peace operations are not a panacea, however. These missions inevitably face shortcomings. Nonetheless, without UN or AU peacekeepers, African conflicts would likely be of greater intensity and frequency—and international actors would face greater pressure to intervene militarily themselves.