Five Zones of Militant Islamist Violence in the Sahel

The deterioration of the security environment in the western Sahel is marked by an array of differing actors, drivers, and motivations, calling for contextualized responses. 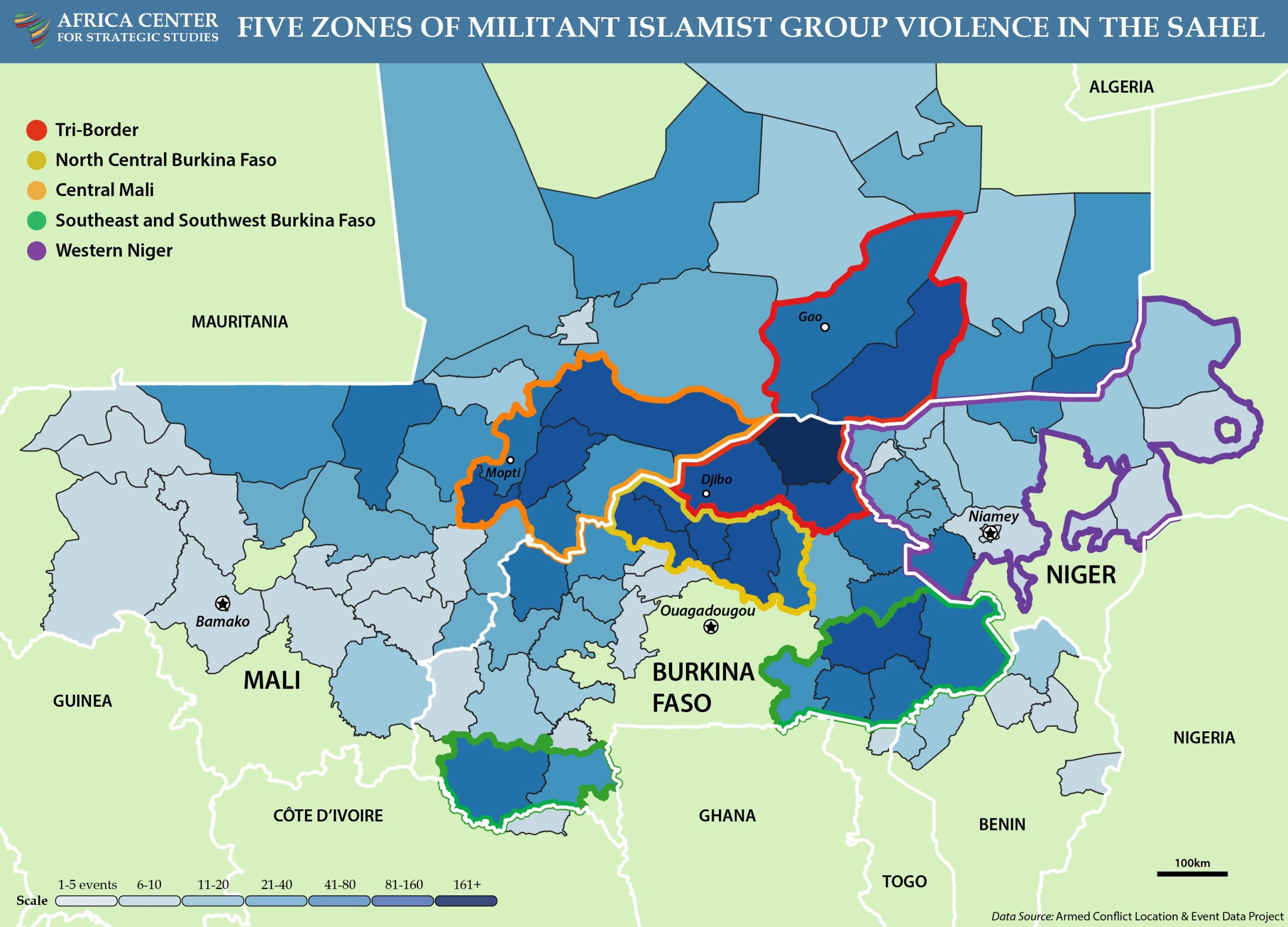 The western Sahel has seen a quadrupling in the number of militant Islamist group events since 2019. The 2,800 violent events projected for 2022 represent a doubling in the past year.  This violence has expanded in intensity and geographic reach: 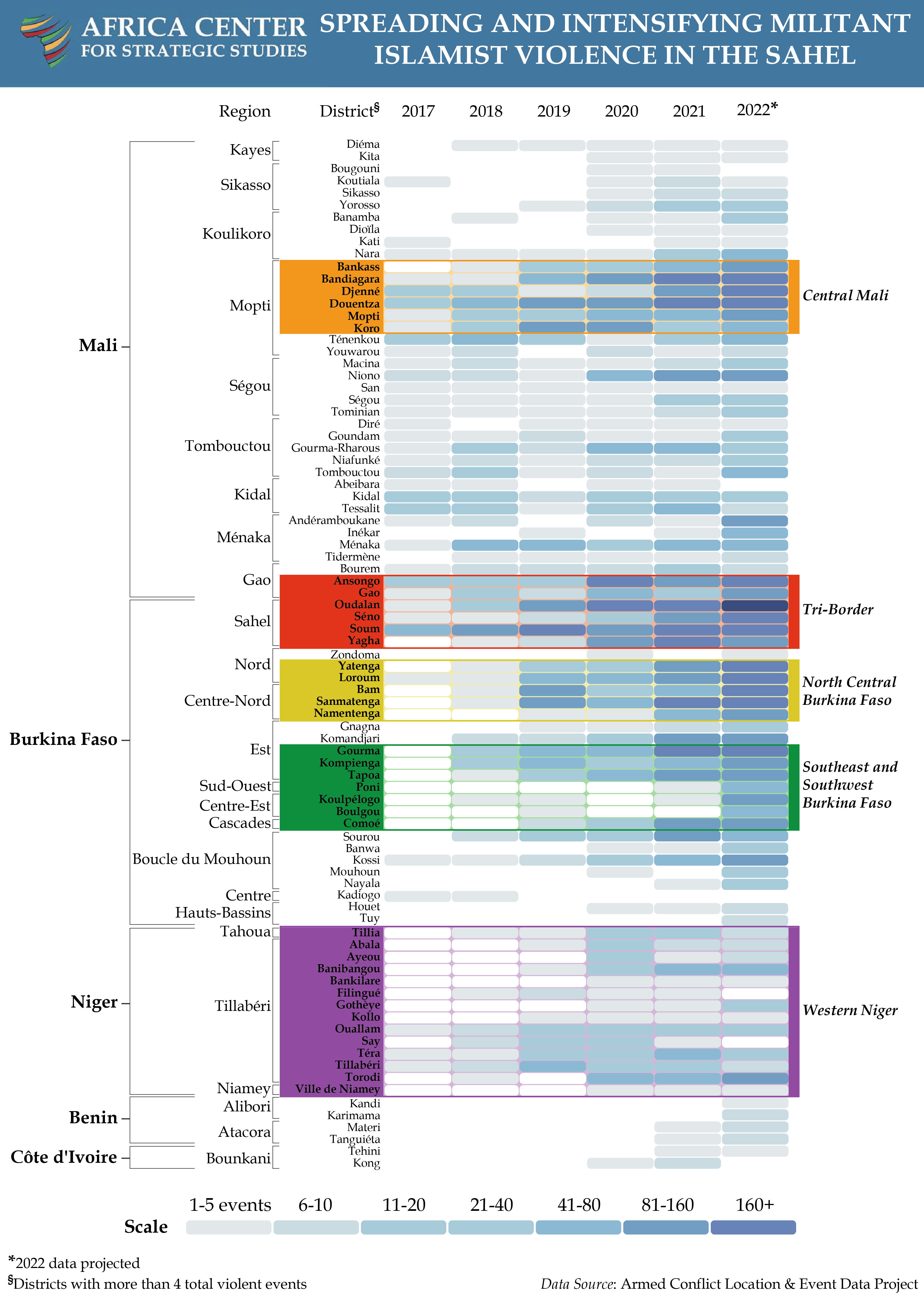 Click here for a PDF version of these maps

Often overlooked in these grim trendlines are the differentiated security contexts that comprise this theatre. Five distinct zones emerge, each with varied conflict dynamics: the Tri-Border, North Central Burkina Faso, Central Mali, Southeast and Southwest Burkina Faso, and Western Niger. Collectively, these five zones encompass over 70 percent of militant Islamist violence in the Sahel. Unpacking the features shaping each of these respective zones provides insights into the customized approaches needed to reverse these trends.

This zone covers parts of northern Mali and a region of Burkina Faso and Niger known as Liptako-Gourma. Historically dominated by pastoralist populations, notably the Fulani but also the Tuareg and Gourma peoples, this zone has become the epicenter of violence in the Sahel. Several militant groups, including remnants of the Burkinabe group, Ansaroul Islam, fight under the banner of the Jama’at Nusrat al Islam wal Muslimin (JNIM) coalition. Others are aligned with the Islamic State in the Greater Sahara (ISGS). 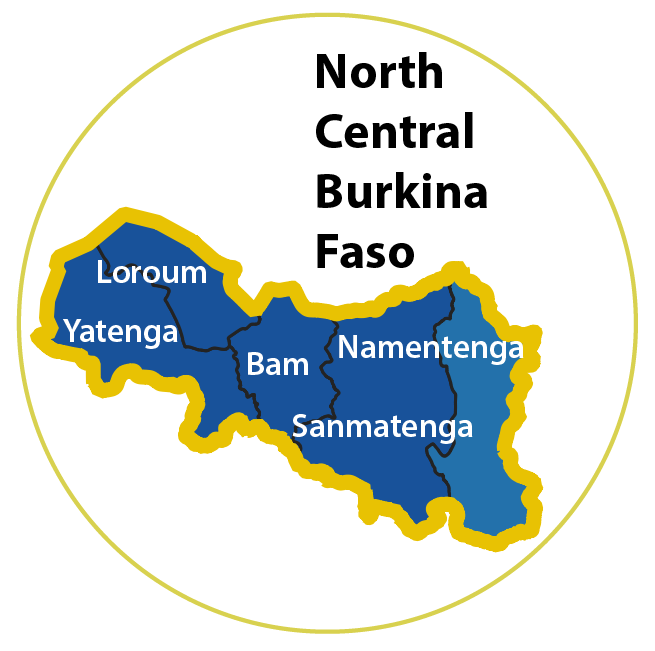 This zone has experienced one of the most rapid escalations of violence in the Sahel. Militants from the Macina Liberation Front (FLM), part of the JNIM coalition, along with remnants of Ansaroul Islam, have pushed farther south into this more populated area of Burkina Faso (with nearly 3 million inhabitants). The violence has displaced nearly 2 million Burkinabe, many seeking refuge at a displaced persons camp in Kaya, the regional capital and fifth largest urban center in Burkina Faso. This is also an area with significant gold deposits including at least three industrial mines and dozens of registered artisanal mines. Militant Islamist groups seek to control these sites as a major source of revenue for their activities. 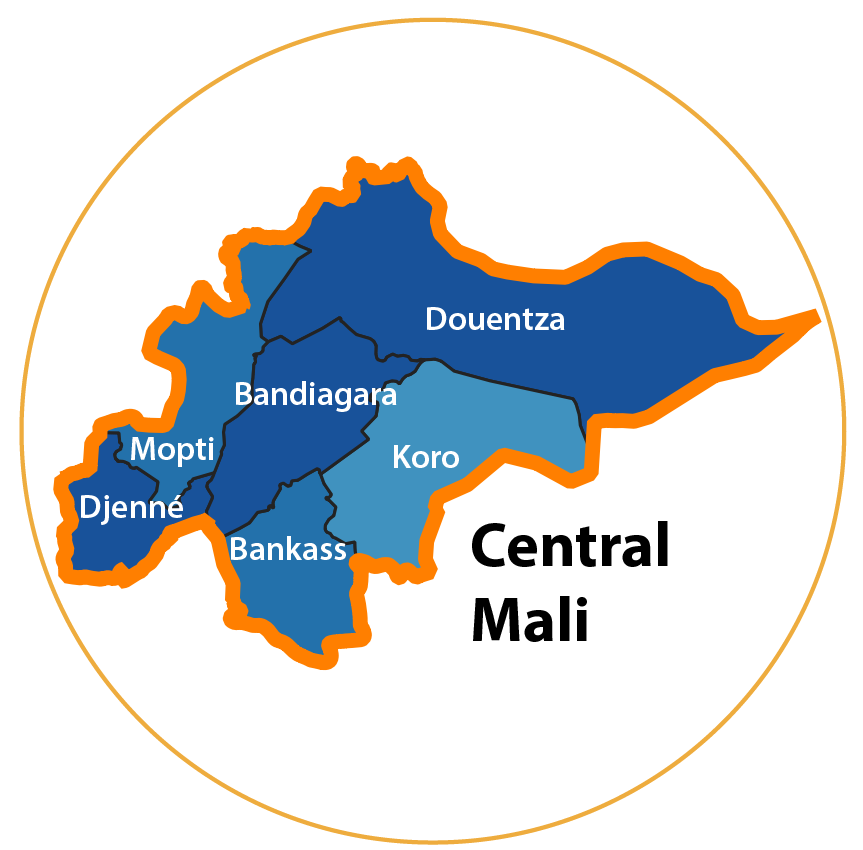 Central Mali has been the stronghold of FLM since 2015. Led by extremist preacher Amadou Koufa, FLM’s violence has dramatically shifted insecurity in Mali from the more remote northern regions to the central districts of Bandiagara, Bankass, Djenné, Douentza, Koro, and Mopti—collectively comprising a population of some 1.5 million people.

Koufa has imposed a harsh version of Sharia to resolve land and resource disputes and has imposed strict behavior rules (especially on women) over significant parts of Central Mali. He has also strategically exploited intercommunal differences, playing up pastoralist grievances as a means to drive recruitment. From this base, FLM has recently led a surge into western and southern Mali becoming increasingly capable of threatening the capital Bamako. This comes after FLM successfully supported JNIM elements pushing into northern Burkina Faso and to a lesser degree farther south into southwestern Burkina Faso.

Nearly all of the incidents in Southeast and Southwest Burkina Faso are attributed to militant groups linked to JNIM. This is consistent with the long history of JNIM-affiliated militants collaborating with criminal, smuggling, and trafficking networks across West Africa.

Southeast Burkina Faso. Starting in 2019, a surge of violent activity attributed to JNIM destabilized eastern Burkina Faso along the border with Niger. Since 2021, it has become increasingly concentrated in the district of Gourma at the center of Burkina Faso’s Southeast. Militant Islamist groups use the parklands in this zone that extend into the territories of Niger, Benin, and Togo for staging attacks into these littoral states. This area is also key to gold smuggling networks connected to Togo as well as other criminal and poaching rings that rely on commercial routes between the countries to move illicit goods.

Southwest Burkina Faso. The borderlands between Burkina Faso, Mali, and Côte d’Ivoire exhibit well-developed illicit smuggling and small arms trafficking networks that accompany goods being transported through Côte d’Ivoire to commercial hubs in Mali and Burkina Faso. This area is also developing into a new locus of artisanal gold mining. The 60-percent increase in militant attacks in this zone may be an indication of JNIM-linked groups attempting to capture some of these revenues.

Littoral West Africa. FLM and other JNIM-linked militants are threatening communities in the northern regions of littoral West Africa. Violent events linked to these groups have occurred in ten districts located in northern Côte d’Ivoire, Benin, and Togo. Though activities in these northern areas remain a small percentage of the overall violence, the expanding presence of militant Islamist groups in these areas is cause for concern.

While militant violence in Niger represents less than 10 percent of the total faced across the region, Niger is threatened by the surge in violent activity across its borders.

ISGS has been the primary militant group attempting to exploit Niger’s borders with Mali and Burkina Faso to expand its influence over remote communities. Moreover, violence against civilians, as a proportion of all violence, is much higher in Niger. Militant Islamist groups target civilians in more than half of their attacks in this zone as communities here have attempted to resist ISGS’s extortion through collection of an abusive zakat tax. The districts of Tillia, Ouallam, and Banibangou have been particularly devastated.

Gothèye and Torodi are the only districts where JNIM operates in Western Niger. Torodi borders Southeast Burkina Faso where JNIM has made an aggressive push, using parklands and reserves as a safe haven.

The 174 violent events projected in Western Niger in 2022 represent a nearly 10-percent increase from the previous year.

Drilling into the dynamics shaping insecurity in the respective zonal hotspots provides valuable insights into the broader trajectory of militant Islamist violence in the Sahel that can help better align resources and mitigation strategies. Several overarching takeaways emerge:

More on:    Countering Violent Extremism in Africa   Irregular and Asymmetric Warfare   The Sahel