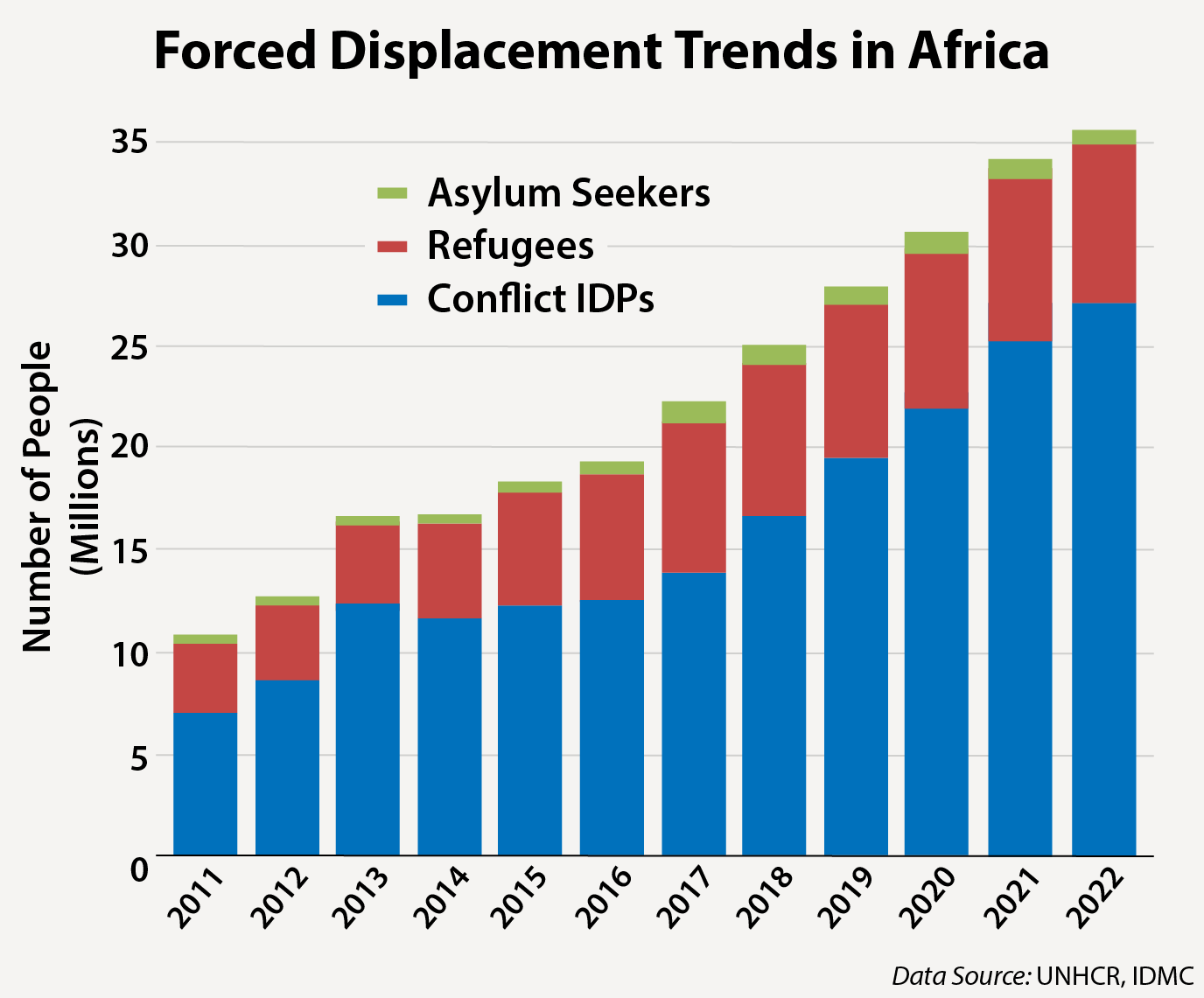 The number of forcibly displaced people (internally displaced, refugees, asylum seekers) in Africa continued its uninterrupted escalation over the past decade—expanding by 12 percent (3.7 million people) in the past year. The record 36 million people currently displaced is triple the figure of a decade earlier.

Forced displacement is an outcome of conflict, violence, and persecution. Roughly 75 percent of all forced displacement in Africa are internally displaced people. This displacement then causes strains on surrounding communities and countries that must absorb these sudden, unplanned population movements. Eight countries were responsible for the lion’s share of the past year’s increase. 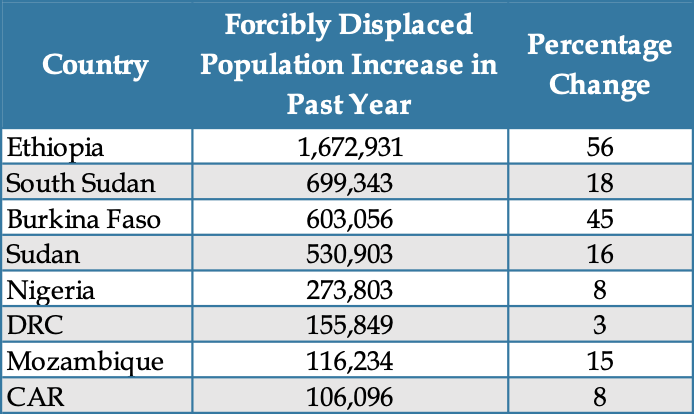 A truce negotiated in March holds out hope that peace talks can lead to a resolution of the conflict and the return of the displaced to their homes and livelihoods. The 1.5 million Ethiopians   displaced prior to the conflict in Tigray are a reminder, however, that Ethiopia faces multiple drivers of instability that will require ongoing attention if the forcibly displaced population in Africa’s second most populous country is to be sustainably diminished.

With 4.6 million people forcibly displaced, South Sudan has the highest proportion of its population displaced (40 percent) of any country in Africa.  The country has not had presidential elections since independence in 2011. Rather a string of broken peace agreements and ostensible coalition governments have perpetuated competition by rival militias and a war economy that continues to drive instability and violence. The 700,000 people displaced over the past year makes South Sudan the African country with the second largest level of displacement in Africa during this time, representing roughly 20 percent of the increase on the continent. This, along with the record and enduring levels of refugees, reflects the persistence of fear and trauma among many South Sudanese.

Escalating militant Islamist violence in Burkina Faso—especially violence against civilians—forced roughly half a million people from their homes in the past year. This represents a nearly 50 percent annual increase.

Violent events linked to militant Islamist groups, notably the Macina Liberation Front and the Islamic State of the Greater Sahara, are projected to increase by 140 percent this year. Fatalities have increased by 30 percent. These patterns are being replicated in Burkina Faso’s neighbors, Mali and Niger.

There are an estimated 1.9 million forcibly displaced Burkinabe today—all a result of the extremist violence that first hit the country in 2017. The security situation has only worsened following a military coup in January 2022. 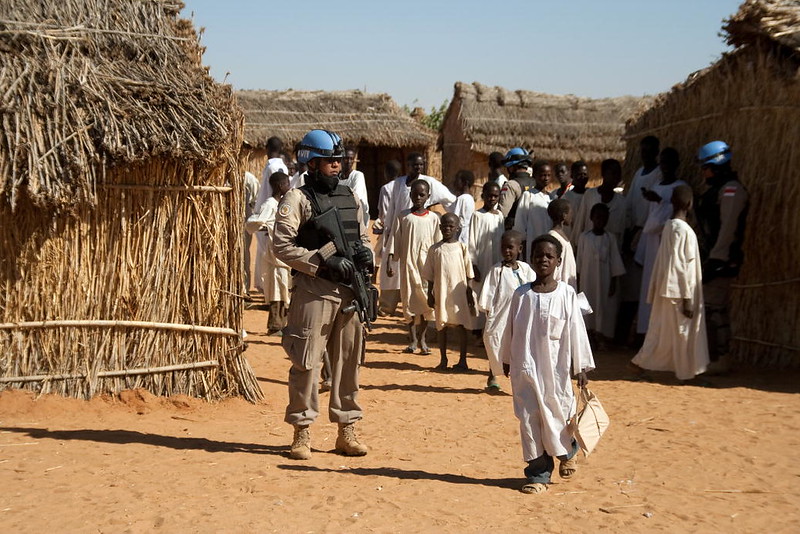 The October 2021 military coup that derailed Sudan’s democratic transition also upended the 2020 Juba Peace Agreement between the transitional government and nonstate armed groups in the country. The ensuing and escalating violence, particularly in Darfur, has displaced 700,000 Sudanese. This has added to Sudan’s total forcibly displaced population of 3.9 million, which represents the legacy of the country’s many decades of conflict, repression, and military rule.

There were more than a quarter million Nigerians displaced in the past year. Much of this was the result of the escalating instability caused by gang criminality (“bandits”) in the northwest of the country. More than 110,000 people in northwest Nigeria were internally displaced—and some 35,000 fled to Niger. Farmer-herder conflict in the Middle Belt region, such as in Benue State, also caused more than 140,000 to flee their homes (a 50 percent increase in the past year). Nigeria’s ongoing diverse array of security challenges, most notably violent extremism in the northeast,  have collectively resulted in some 3.5 million Nigerians being forcibly displaced.

Democratic Republic of the Congo

With 6.3 million forcibly displaced people, the Democratic Republic of the Congo (DRC) has more displacement than any other country in Africa. This nation of 92 million people has experienced lingering armed violence since the end of the Second Congo War in 2003. The reported additional 155,849 people displaced in the past year, therefore, is an illustration of the country’s ongoing fragility. Much of the recent displacement is a result of instability in the east of the country, driven by illicit mining, regional rivalries, and a proxy war between Uganda and Rwanda.

The Central African Republic (CAR) saw over 100,000 new displacements in the past year, bringing the total displaced population to 1.3 million. With nearly one-third of its population displaced, CAR is the country with the second highest level of forced displacement in Africa (behind South Sudan).

Continued fighting in CAR over the past year reflects a further deterioration in the peace agreement signed by the government and 14 rebel groups in 2019 (the eighth in 7 years). It also highlights the fallacy that the Russian Wagner mercenary group, brought into the country by President Faustine-Archange Touadéra, would contribute to stability. Instead, human rights violations have increased and Wagner has now become embedded in CAR. A Russian is the President’s national security advisor and Wagner mercenaries serve as the presidential guard.

The deployment of Southern African Development Community (SADC) and Rwandan forces a year ago quickly liberated Mocimboa da Praia from the Islamist militant group, Ahlu Sunnah wa Jama’a (ASWJ) (known locally as “al Shabaab”). Rather than confront the SADC and Rwandan forces, ASWJ fighters dispersed to other parts of northern Mozambique, where they have ratcheted up their attacks on local communities. ASWJ violence against civilians doubled over the past year, after sharply declining in 2021. This has caused 116,000 Mozambicans to flee their homes in the past year, adding to the 881,000 Mozambicans who have been forcibly displaced since the ASWJ violence began in 2017.

The continued expansion in Africa’s forcibly displaced population is a sobering reminder of the enduring nature of many African conflicts. Rather than fizzling out on their own, they are apt to fester and trigger new layers of instability.

A review of the eight countries contributing most to the latest expansion in forcibly displaced persons underscores the diversity of conflicts raging across the continent. There are clear geographic concentrations with four of the top five countries with the greatest level of total displacement in the Greater Horn-and this region comprising roughly half of all total forced displacement in Africa.

Nonetheless, each of Africa’s 16 conflicts has its own set of unique drivers, actors, underlying conditions, and regional contexts. In many of these countries, the conflicts are most acute in particular provinces, rather than being national in scope, highlighting the vast variances within and between countries.

The dispersed nature of African conflict today underlines the need for greater investments in diplomatic, conflict resolution, and peacebuilding capacity. While these efforts must be focused at the subnational level to fashion the local solutions required, they will require robust engagement from national, regional economic community, and international actors to be sustained. 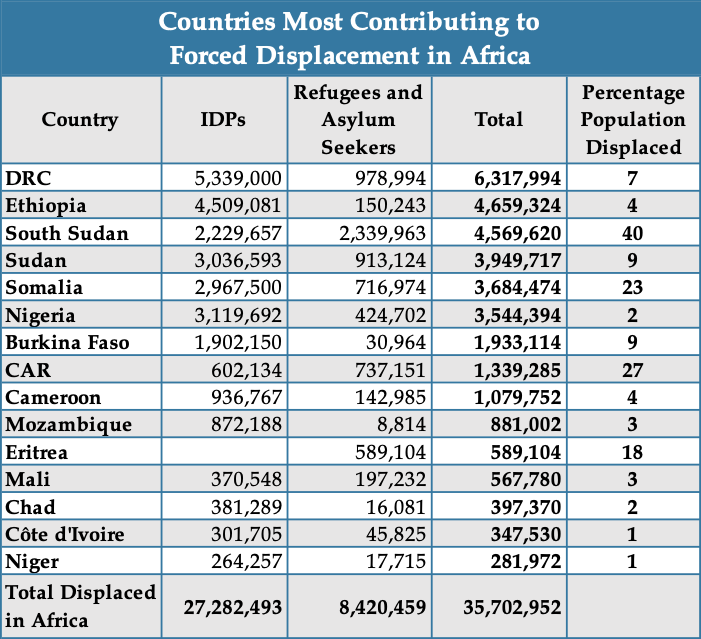 More on: Migration and Forced Displacement