The Growing Threat of Violent Extremism in Coastal West Africa

Cattle in Arli National Park on the border between Burkina Faso and Benin (Photo: Baliola)

Militant Islamist group violence in Burkina Faso, Mali, and western Niger increased by 70 percent in 2021. This continues an uninterrupted escalation and spread of violent events in the region since 2015. Initially centered in Mali, militant Islamist group activity has shifted progressively to Burkina Faso, which now accounts for 58 percent of all violent events in the Sahel.

From Burkina Faso, militant Islamist groups have increasingly targeted littoral countries to the south including Côte d’Ivoire, Benin, and Togo. Benin has experienced nine attacks attributed to militant Islamist groups in its borderlands since December 2021. Two of these were sophisticated operations involving improvised explosive devices on the Beninois side of the W-Arly-Pendjari park complex (Parc W). The attacks killed eight people, including park rangers and security forces, over the course of 2 days.

The violent events in Benin have mirrored the first ever militant Islamist attack in neighboring Togo and at least 14 related incidents in Côte d’Ivoire. These attacks are likely linked to the Macina Liberation Front (FLM), the most active element of a consortium of militant groups known as Jama’at Nusrat al Islam wal Muslimin (JNIM), which has more than doubled its activity in the Sahel from 2020 to 2021. FLM’s expansionist ambitions have brought the group into more densely populated areas, potentially causing even greater disruption and enabling it to tap a larger pool for recruitment and revenue generation. 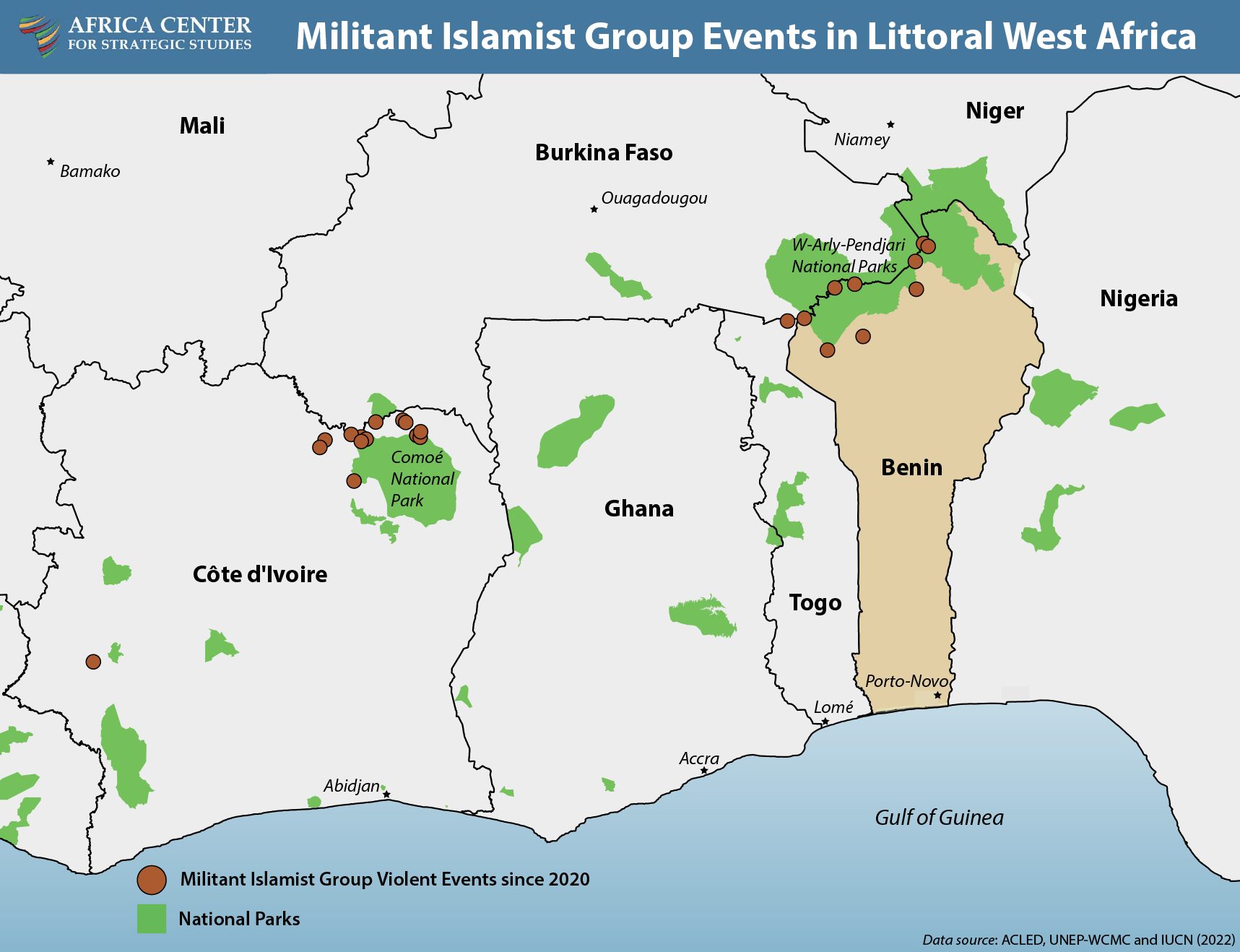 As part of their escalation in the Sahel, these militant groups have been particularly effective at recruiting young, Muslim (often Fulani) livestock herders by playing on their grievances. These include amplifying intercommunal tensions (particularly farmer-herder concerns over land) and distrust of the government. Given the wide presence of pastoralist communities with socio-ethnic ties to the Sahel in the northern provinces of West Africa’s littoral countries, there are fears that these grievances may evolve into sympathies for violent extremist narratives.

As the security response to this threat ramps up, the ability of governments in the littoral countries to avoid the mistakes of their counterparts in Mali and Burkina Faso will be critical. Heavy-handed tactics by security forces have sown distrust among and within communities and made rural inhabitants more vulnerable to exploitation and recruitment by extremist groups operating in those countries.

Survey and focus group research that my Beninois partners and I have conducted with over 300 individuals since 2020 reveals that pastoralists in Benin indeed face grievances that militant Islamist groups could exploit to make inroads in the littoral countries.

Specifically, pastoralist communities are clinging to precarious land rights in places where they have lived for decades and struggle to keep their animals alive during the region’s long dry season. The stretch of subhumid savanna that historically served as dry season grazing areas in northern Benin is increasingly occupied by agriculture and no longer viable for significant numbers of livestock. This is causing pastoralists to either seek illicit arrangements to graze their cattle in protected areas or to seek out less-crowded landscapes. With population levels and development expanding, land pressures can be expected to further increase.

“95 percent of respondents expressed the opinion that violent extremists could gain influence by intervening in land conflicts.”

In a 2021 survey of 37 livestock herders in villages that neighbor Parc W in Benin’s Alibori Department, 95 percent of respondents expressed the opinion that violent extremists could gain influence by intervening in land conflicts. This could occur through direct interventions during or after altercations that turn violent or by siding with pastoralist communities seeking to defend or reclaim land.

Militant groups have reportedly already established contacts in northern Benin and are beginning to be seen regularly in villages where they circulate and purchase provisions. Notably, it appears these militants are not from the area but are coming from across the Burkina Faso border. A local family recounted that one militant recently stopped at their farm outside the town of Guene and asked for directions.

Two Beninois government policy initiatives that significantly constrain traditional pastoralist livelihoods risk unintentionally opening the door to militant Islamist groups looking to build local support. In 2019, the government of Benin passed a ban on the entry of foreign livestock engaged in long-distance migration known as transhumance. The ban came in response to a spike in farmer-herder violence that overwhelmed traditional mechanisms of conflict resolution and, in certain instances, implicated foreign herders. The violence is largely attributed to farmers expanding into areas pastoralists have historically used for forage. While Benin prohibits cultivation within livestock corridors, these laws are frequently disregarded where farmers maintain that the corridors pass through their customary lands.

This ban on the movement of livestock across borders (which has been replicated elsewhere in the region) further limits areas pastoralists have for their animals to graze. Rather than address land pressures and pastoralists’ access to land, the transhumance ban may unintentionally undermine fragile social institutions that govern resources between farmers and pastoralists, whether they be foreign or local.

A second policy initiative launched by the Beninois government as part of its effort to reduce land conflicts and property rights disputes is an ambitious plan to sedentarize local pastoralists through dedicated sites of intensive livestock production. Pastoralists in Benin are cautiously optimistic that the plan will secure their land rights and improve their livelihoods through increased support of the livestock sector.  However, Benin’s sedentarization plan carries significant risks in the near term.

First, it will require reforming, or at least clarifying, delicate land tenure systems that are at the heart of most farmer-herder disputes. This will necessitate careful political work to ensure equity. However, the urgency of the violent extremist risk could lead to quick, top-down measures that inadvertently fuel perceptions of injustice. Second, the program’s focus on modern livestock production could displace some pastoralists from their land by favoring commercial and more politically connected group interests. This could create grievances among young pastoralists dispossessed from their traditional livelihoods and increase their receptivity to extremist messaging.

Young Fulani men have long been recruits for criminal groups, known in the region as “road cutters,” who ambush vehicles and rob passengers in unsecure rural areas. This practice has proven seductive for marginalized youth who are unable to earn a living through other means. Engaging with criminal groups breeds distrust of the broader Fulani community among the police, foresters, and within farming communities. Security forces at times employ heavy-handed tactics to deter criminality, but such tactics aggravate this dynamic propelling other Fulani youth toward criminal or insurgent activities and deepening distrust.

“The failure of authorities to resolve such disputes transparently left the door open to militant Islamist groups.”

The state of distrust has enabled predatory behavior on the part of unscrupulous authorities who target young pastoralists because they are typically less educated and lack social standing yet are often in possession of valuable assets like motorcycles and livestock. Shakedowns are frequent, and outright theft is not uncommon. At times, these confrontations can turn violent.

Local governments charged with addressing these disputes, and land rights issues more generally, lack the capacity to do so equitably. Consequently, they are prone to inaction and, in some instances, judgments tinged with bias or corruption. In central Mali, the failure of authorities to resolve such disputes transparently left the door open to militant Islamist groups who, coming alongside pastoralists, intimidated farming communities into accepting expanded pastoralist land rights—along with an escalation of violence.

The militant Islamist groups threatening to spill into Benin take advantage of the cover of large wilderness areas. Parc W overlaps the boundaries of Burkina Faso, Benin, and Niger, and abuts the Togolese border. The Burkinabe side of the park has been used by militant Islamist groups in recent years, and the park’s roughly 17,150 square kilometers of UNESCO World Heritage-protected wilderness could easily serve as a staging point for destabilizing attacks in Benin and Togo.

The management of vast protected areas like Parc W, which have porous borders and overlap international boundaries, raises important questions regarding security and pastoralists’ use of these areas. The W-Arly-Pendjari park complex recently came under the management of the South African non-profit conservation organization African Parks, which has a reputation for judiciously protecting African national parks from poachers and development in close collaboration with local communities. 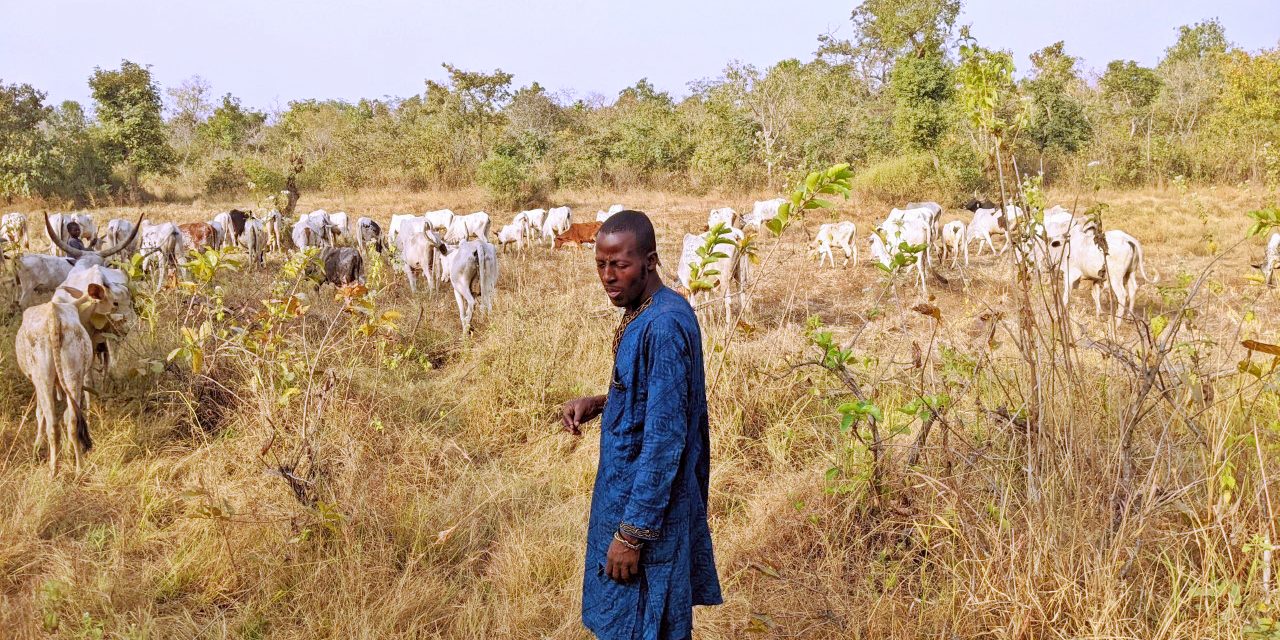 A shepherd and his herd in northern Benin (Photo: Leif Brottem)

In Benin, African Parks has been building community goodwill by supporting vaccination campaigns and taking a more conciliatory approach to livestock grazing illicitly in the parks. Protecting the integrity of the parks, however, requires excluding certain resource users, especially hunters and livestock herders, which can create local animosities if not handled carefully. African Parks rangers have also been on the front line in the efforts to prevent militant Islamists from establishing themselves in Benin’s national parks.

Surprisingly, many pastoralists freely express their support for stricter regulation of protected wilderness areas even though it means their animals can no longer graze within them. They recognize that without such strict protection, farmers could quickly occupy the parks and begin farming them. Herding communities who have lived for years in adjacent areas are placing their hopes in park authorities to follow through with pledges to protect pastoralist rights in special use zones that have been set aside for them.

This is a fraught process that exceeds the capacity of a conservation organization like African Parks to implement on its own. Despite local support for identifying pastoralist areas, the implementation of this scheme by African Parks inadvertently triggered a deadly intercommunal land dispute between farmers and herders in Guene in 2021. Nonetheless, local governments have been unable or unwilling to step in and do their part to resolve land disputes before they escalate into violent conflict.

Geographic mobility will remain essential to a productive livestock sector in the near term. Even as national governments pursue a modernizing strategy of sedentarization, local authorities must redouble their efforts to protect livestock corridors and protect herders’ legal resource rights. Such policies reduce insecurity and pastoralist vulnerabilities that otherwise give militant Islamist groups opportunity for exploitation.

“Local pastoralists are feeling pressure from both local communities and militant Islamist groups.”

Customary village-level authorities can play an instrumental role in mitigating land conflict. Conflict mediation efforts must involve village chiefs and clan elders through systems that link them to higher-level authorities and include a capacity building component. Resolving land and other disputes between farmers and herders before they escalate into conflict reduces the capacity of militant Islamist groups to leverage communities against one another. Heavy-handed tactics undermine the ability of security forces to build trust with local communities playing into the hands of militant Islamist groups.

Enhancement of security measures in the Parc W and other wilderness areas used by militant Islamist groups must not undermine human security in neighboring communities. The Beninois government, the African Parks Network, and other partners must find innovative ways to establish a new social contract around wildlife conservation that addresses the concerns of local communities.

Joint security-development initiatives must include a social sensitization component to prevent increases in anti-pastoralist attitudes and rhetoric. Reducing social marginalization and stigmatization is key to limiting ethnic targeting. Ordinary Beninois are understandably alarmed about the dangers posed by extremist attacks in the north and could become susceptible to anti-pastoralist tropes. Simplistic narratives blaming an entire social group for what are complex social, cultural, and economic processes are counterproductive and likely to generate greater insecurity that advances the goals of militant Islamist groups to sow conflict and gain influence over communities.

Leif Brottem is Associate Professor of Global Development Studies at Grinnell College. He researches pastoralism and rural livelihoods in West and Central Africa.