Nigeria’s largest protests in a generation are calling for police and governance reforms—and expose long-delayed initiatives to enhance professionalism and oversight of Nigerian police. 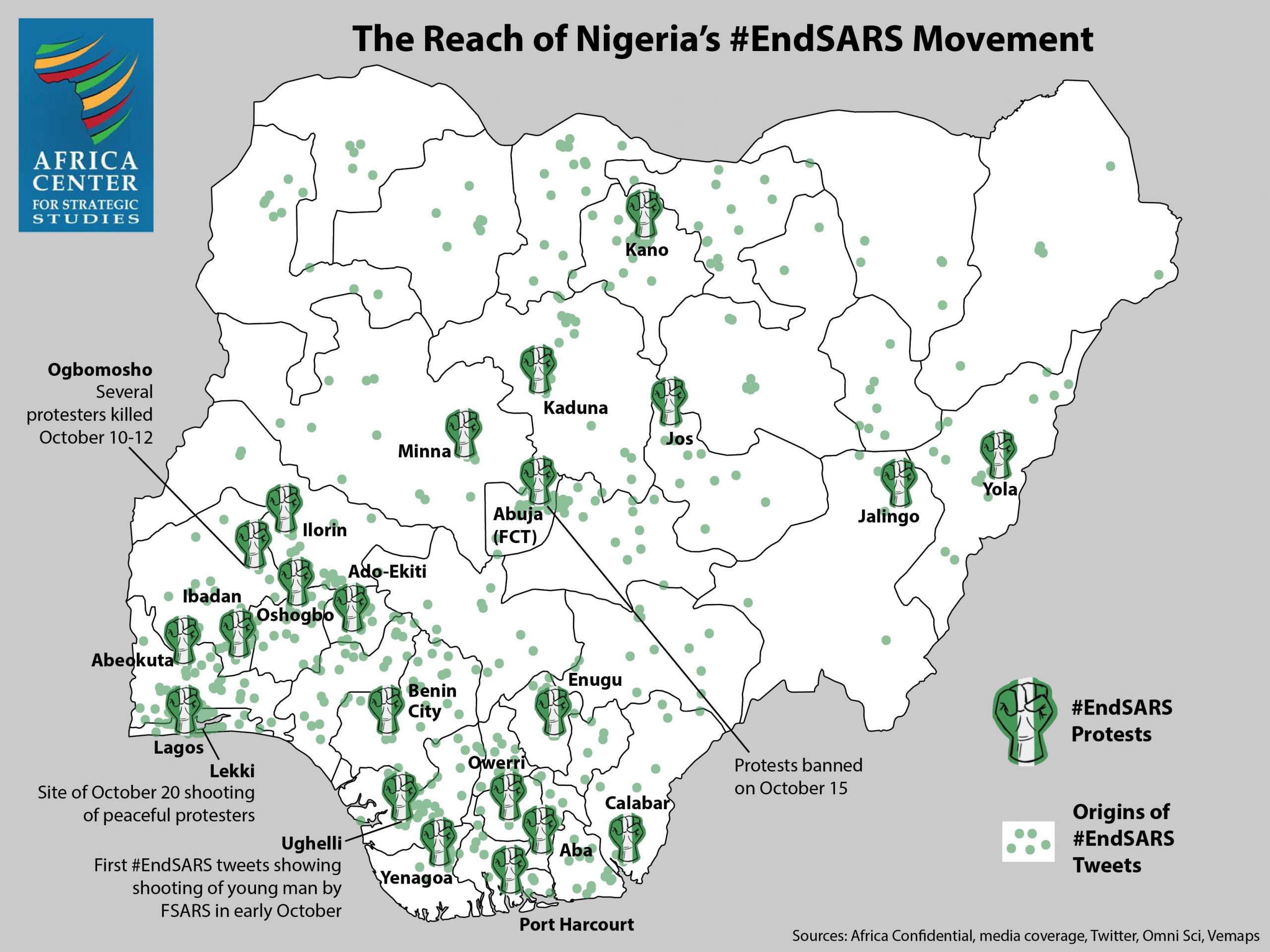 The carjacking and shooting of a young man in Delta state by Nigeria’s Special Anti-Robbery Squad (SARS) police officers in October sparked widespread public outrage. Almost immediately, many young Nigerians began sharing their anger and their own experiences with SARS on social media, calling themselves the Soro Soke (“the Speak Up”) generation. Within days, the #EndSARS hashtag became a movement that gave voice to Nigerians fed up with the violence, extortion, and impunity of the notorious police unit. Over the following weeks, numerous protests and vigils were held across Nigeria, transcending the country’s religious, ethnic, and political divides. Nigerian Police

The protests came to a head on October 20 when Nigerian security forces fired on protestors staging a sit-in on a toll road in the Lekki area of Lagos. Twelve people were killed, adding to dozens who have died across the country during the protests. Witnesses claim army and police officers were responsible for the unprovoked Lekki shooting. The incident was added to an inquiry established to look into the SARS abuses.

The #EndSARS movement is driven by deep discontentment and systemic problems perceived by Nigerian citizens. Surveys show that Nigerians report very low levels of trust in the police—and that a third of them have paid or been asked to pay a bribe to police. Experts describe how some police forces have been commercialized to serve the interests of politicians and rich individuals rather than to protect the public. Nigeria’s National Human Rights Commission reported that security forces extrajudicially killed at least 18 people while enforcing the country’s COVID-19 lockdowns earlier this year. Incidents of police violence are common in the national news.

What’s motivating Nigeria’s #EndSARS protests and why have they focused on the Anti-Robbery Section of the police force?

Armed robbery is one of the most serious security threats facing Nigeria. Over the years it’s become more violent and widespread across the country. The State Anti-Robbery Section—part of the State Criminal Investigation Departments within the 36 state commands and FCT (Federal Capital Territory)—has long been ineffective due to the perennial challenges facing the Nigerian Police Force (NPF). These include undertrained personnel, lack of funding, inadequate equipment, and weak supervision and accountability, to mention a few. 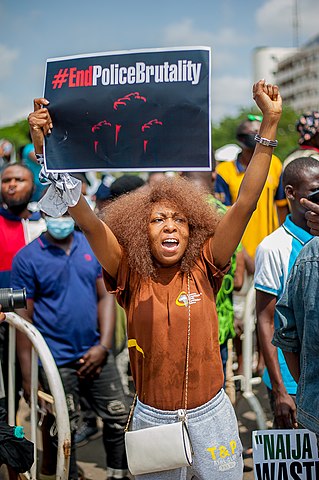 Rather than address these challenges, the NPF, in its wisdom, set up the Federal Special Anti-Robbery Squad (FSARS), which operates directly under the Inspector General of Police, with an Abuja-based Commissioner of Police overseeing their activities. FSARS was established across the 36 states and FCT. They do not report to the States’ Commissioners of Police.

When it was created in the 1990s, the FSARS team was said to be effective and busted armed robbery operations across the country. However, over time, the perennial challenges of Nigeria’s police institutions caught up with them. FSARS engaged in human rights violations particularly torture, extrajudicial killings, and disappearances of suspects in their custody, among other allegations.

Youth are particularly targeted, mainly because of their naiveté and lack of knowledge of their rights as citizens. Police officers, meanwhile, often hold unsupported stereotypes against youth—tagging them as criminals, internet fraudsters, or armed robbers—because of dreadlocks, ripped jeans, tattoos, flashy cars, or ostensibly expensive gadgets like smart phones. The targeting has not been gender-specific, so young women have also fallen victim.

There has been a series of efforts to reform FSARS/SARS over the years, however none has worked so far. They have been disbanded several times, however, have always found their way back into existence.

Now, Nigerians are protesting to put an end to SARS’ human rights abuses and lack of accountability.

Why is the movement resonating with so many Nigerians?

“The movement resonates with so many Nigerians because SARS depicts everything we are dissatisfied with about the state of our governance system as a whole.”

The movement resonates with so many Nigerians because SARS depicts everything we are dissatisfied with about the state of our governance system as a whole—impunity, corruption, nepotism, and a lack of transparency and effective reforms. These problems are particularly motivating young Nigerians because they form a critical mass of the country’s population (65-70 percent) and many have had experiences being targeted and harassed by these police officers.

How has the government’s heavy-handed response affected the protesters’ demands?

Most of the protesters are fatigued by the killings that have taken place across the country and by the hijacking of some of the protests by bad actors (rioters, looters), allegedly paid by politicians and government agents to alter the narrative of the protests and to give a reason to deploy security forces. Eyewitnesses have reported that some of these hoodlums were being protected by police officers and were the same young men (“area boys”) mobilized by various political landlords in Lagos State to intimidate opponents during elections. Powerful individuals and politicians are resisting police reform because they would prefer to have the police in their pockets, serving their own interests rather than the public’s.

After the attacks by the security forces in places like Lekki, most of the protesters have been forced to flee, regroup, and re-strategize. That is where things stand now. There is some ongoing coordination among activists across the country—organizing to monitor the panels of inquiries, support victims, and guide protesters in putting forward their claims properly. President Buhari’s speech on October 21 addressed—albeit a bit hollowly—some of the demands: reiteration of the disbandment of SARS and the approval of a revised welfare and salary package for the police to improve professionalism, which has been pending since 2018. Some of us are looking at how the Police Act 2020 can be used to facilitate the reform process.

However, reports that Buhari’s administration is now aggressively targeting protest leaders by freezing their bank accounts, confiscating travel documents, and detaining them despite promises of dialogue doesn’t show good faith on the part of the government. It gives the impression that the steps being taken towards reforms might not be backed with sincerity. This would only increase the divide and lack of trust between the government and its citizens. 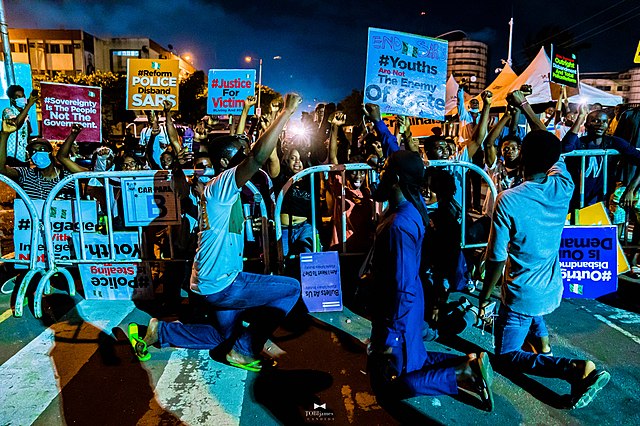 What concrete steps should the government take in engaging protesters and in developing policies for lasting police, military, and governance reforms?

There are numerous reports from different presidential panels of inquiry on this subject matter. The government should synthesize the recommendations from these reports and IMPLEMENT THEM!

These recommendations include prioritizing improved recruitment, professionalization, and accountability mechanisms through merit-based appointment, promotion, and removal processes, as well as improving the working conditions of the police through better pay and benefits.

Transparency is an initial step as recommended reforms from previous reports have never been made public despite the 2012 Freedom of Information Act, which has been eclipsed by the Official Secrets Act. This has allowed the NPF to continue withholding information that would allow for investigations and the identification of paths to reform.

Reforms have also called for permanently disbanding FSARS and preventing similar forces from replacing them. This will require decentralizing policing in Nigeria. Doing so would allow for more accountable community policing not beholden to far-away decisions and political interference. 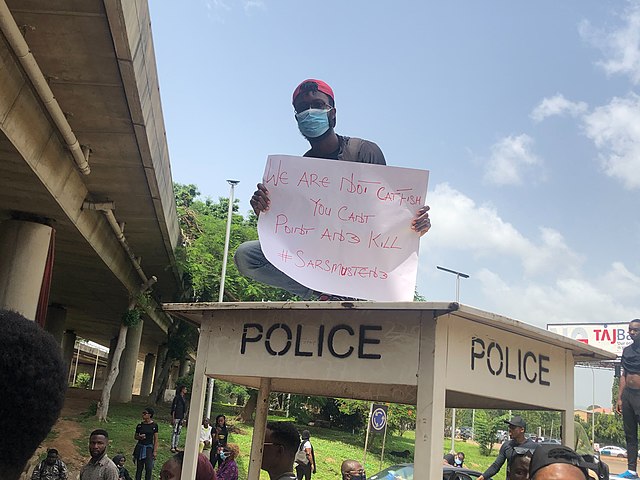 An #EndSARS protester above a police stand in Abuja. (Image: Aliyu Dahiru Aliyu)

In a separate conversation on what comes next, Dr. Sharkdam Wapmuk, Associate Professor at the Nigerian Defence Academy, offered an agenda for reform priorities: