A Surge of Forcibly Displaced

Images of desperate refugees and migrants attempting to cross the Mediterranean from Africa to Europe have come to define the “African migration crisis.” Indeed, attempted crossings have swelled with 86,000 African migrants entering Europe without a visa annually on average since 2014.

African migration to Europe, however, is taking place within a larger phenomenon of forced displacement. More than 1.6 million Africans have been forcibly displaced each year on average since 2014. The record 25 million African refugees, internally displaced persons (IDPs), and asylum seekers documented in 2018 represents an almost five-fold increase since 2005 when just 5 million Africans were displaced (see Figure 1). Moreover, it is not widely recognized that over 95 percent of forcibly displaced Africans remain in Africa. Two-thirds of this total, almost 17 million people, remain within their own countries. Africa’s “migration crisis,” therefore, is more accurately a “displaced persons crisis.” Migration to Europe, in other words, is just the tip of Africa’s population displacement iceberg.

The multifaceted nature of this crisis defies a single overarching explanation. While often conflated, economic migrants and forcibly displaced persons are responding to different push-pull factors leading to their dislocation. The economic migrants trying to reach Europe are generally searching for employment and a higher standard of living. These individuals largely hail from West and North Africa, are of working age, single, and start with some resources. Others, mostly from the Horn of Africa, aim for the Gulf States. An even larger cohort of economic migrants, however, stay in Africa. Algeria, Côte d’Ivoire, Egypt, Morocco, Nigeria, and South Africa are leading destinations for Africa’s economic migrants given the relative availability of employment opportunities. 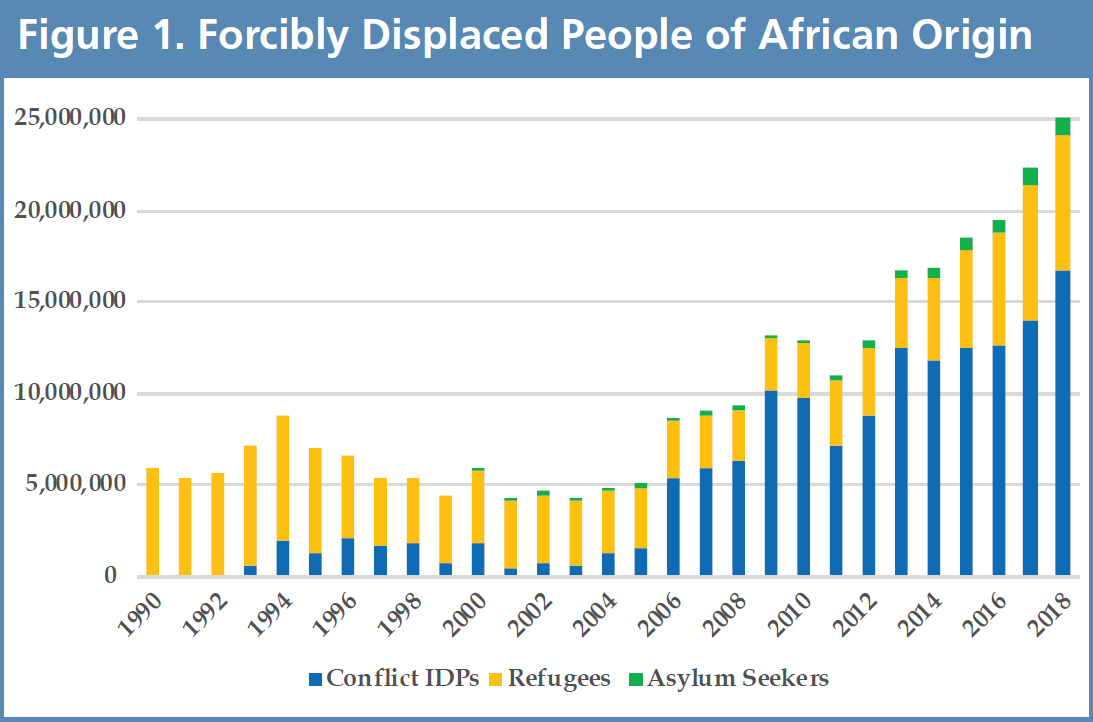 Africa’s forced displacement crisis, meanwhile, is part of a trend that has accelerated since 2005 (see Figure 1). Roughly 84 percent of the 25 million forcibly displaced on the continent come from 8 conflict-affected countries: South Sudan, the Democratic Republic of the Congo (DRC), Somalia, Sudan, Ethiopia, Nigeria, the Central African Republic (CAR), and Cameroon. These conflicts comprise a combination of new and ongoing conflicts. As these conflicts have festered, they have dislocated an ever larger number of people. The number of conflict IDPs in Africa, for example, has escalated by 135 percent since 2011. These individuals have typically been compelled to flee their homes, usually at short notice. The forcibly displaced are often comprised of households with very limited means and suddenly disconnected from their livelihoods.

These near-term drivers of the displacement crisis are compounded by structural factors. Africa’s population is set to double from today’s 1.1 billion to over 2 billion by 2050 (see Figure 2). Some 60 percent of Africa’s population today is under 25 years of age, meaning this population growth will continue for the foreseeable future. Environmental pressures—drought, floods, and declining soil fertility—caused by changing global climate patterns and land pressures, are further long-term amplifiers of population dislocation. 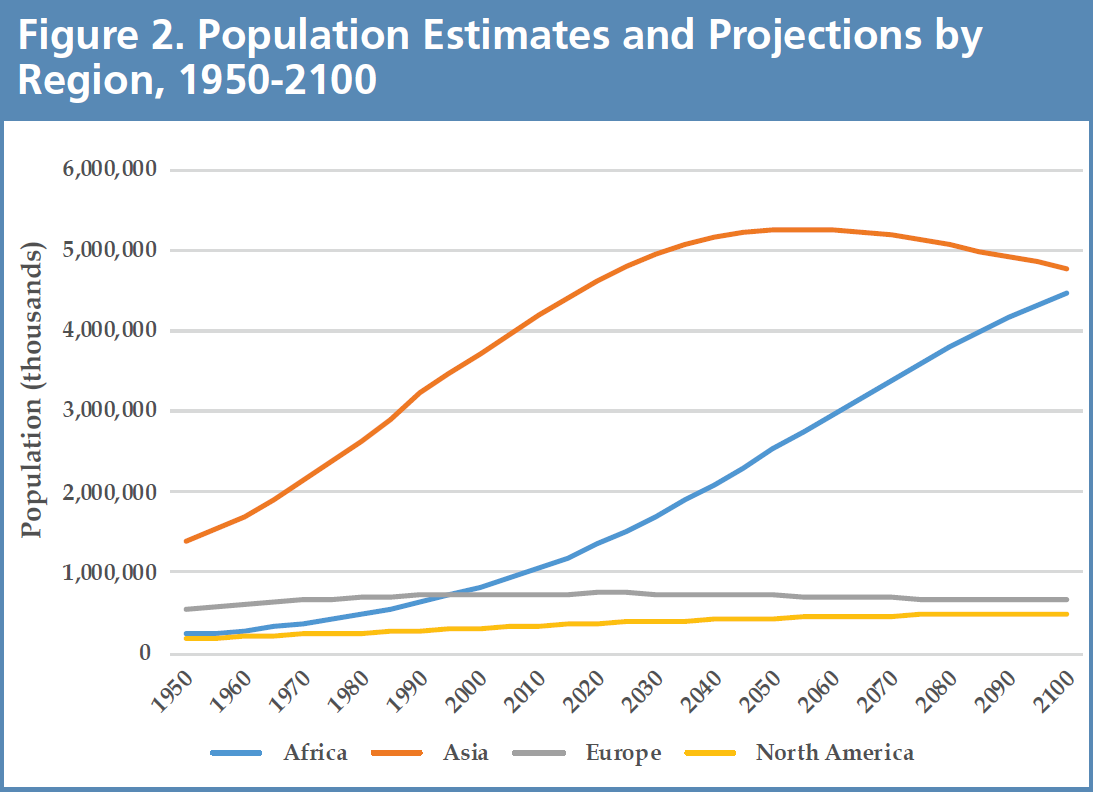 Africa’s displacement crisis has a spectrum of security implications. Most vivid are the serious humanitarian consequences. Displaced populations are subject to higher levels of morbidity, mortality, and malnutrition than stable populations. In fact, mortality rates among displaced populations during the acute phase of displacement are up to 60 times the average levels of mortality.2 The major causes of death include preventable waterborne diseases, communicable diseases, respiratory tract infections, and malaria. Those living in displacement camps are also notoriously vulnerable to exploitation and abuse by those managing the camps or local communities. As the scale of Africa’s displacement crisis increases, the human costs also grow more profound.

Economic migrants who attempt to transit the Sahel-Saharan belt to the Mediterranean or from the Horn to the Gulf States or South Africa face other security threats. Unable to access safe, legal channels of travel, they are forced to take “irregular” paths that do not afford protection and cost up to $5,000 per person. This demand for alternate means of passage has created a lucrative market in human smuggling in Africa loosely estimated at between $550 million and $1 billion.

In addition to individual entrepreneurs capitalizing on an opportunity to earn a living, a variety of transnational criminal networks have emerged or adapted to fill this illicit market demand. Terrorist groups, including those linked to African affiliates of al Qaeda and the Islamic State as well as a variety of lesser known groups, have also been drawn to this revenue source. Meanwhile, facilitators spanning western and eastern Africa use incentives, recruitment, and coercion to drum up more “customers.” In effect, human smuggling is causing a transfer of resources from vulnerable individuals to transnational criminal networks, militias, militant organizations, and terrorist groups, all of which are focused on undermining governments on the continent. The regional and transnational implications from this, in turn, create further instability in the international system.

There is also the inherent instability created when large numbers of a population are uprooted and with them their existing social, governance, or economic structures. When local merchants and traders are displaced, for example, this severs the ties that connect these communities with markets, further accelerating economic decline and inhibiting recovery. After conflict, investment tends to dry up for years and sometimes decades. By some estimates, almost 2 percent of Africa’s population has been displaced in recent years. The lost human and economic potential is staggering. Estimates suggest that 20 percent of children in countries affected by conflict do not attend primary school—more than double the 8.9 percent global average.3 This risks perpetuating the human costs and security implications of displacement for a generation.

The economic, environmental, and social strains placed on host communities by a large influx of displaced persons simultaneously creates enormous pressure on governments and entire regions to cope. Northern Uganda, for example, has absorbed some 726,000 South Sudanese refugees—this in a region with a regular population of almost 1.9 million people. As the South Sudan crisis endures, the potential destabilizing effects on northern Uganda, a region with its own legacy of instability, will surely escalate. Similar patterns can be seen as a result of political crises in Burundi, the DRC, and Somalia, among others.

In sum, the surge in African displacement and irregular migration is multilayered and incurs significant human and security costs. Left unaddressed, the upward trend is not likely to end any time soon. Treating the symptoms of the crisis (funding refugee camps, securitizing border crossings, restricting policies for refugees, or increased security patrols on the Mediterranean) will not mitigate the causes behind this phenomenon. If the African displacement crisis is to be reversed, it will be necessary to tackle the drivers of the displacement in the first place.

Drivers of Displacement in Africa »

Drivers of Displacement in Africa »