The Testing of Benin’s Democracy

Benin’s recent no-contest legislative elections are an attempt to consolidate executive power at the expense of democratic gains.

Long hailed as a “beacon of democracy,” Benin’s recent legislative elections—considered a sham by independent observers—have shaken the country’s hard-earned image. On April 28, Benin elected a new National Assembly. However, thanks to a series of eleventh-hour hurdles raised by President Talon’s government, only loyalist parties were permitted to field candidates, resulting in the election of an ostensibly rubber stamp legislature. The opposition boycotted the polls, leading to a meager 27 percent turnout. In response to mass protests, the military fired upon unarmed protesters, ending in at least four civilians’ deaths.

The Frontline of Africa’s Democratic Wave 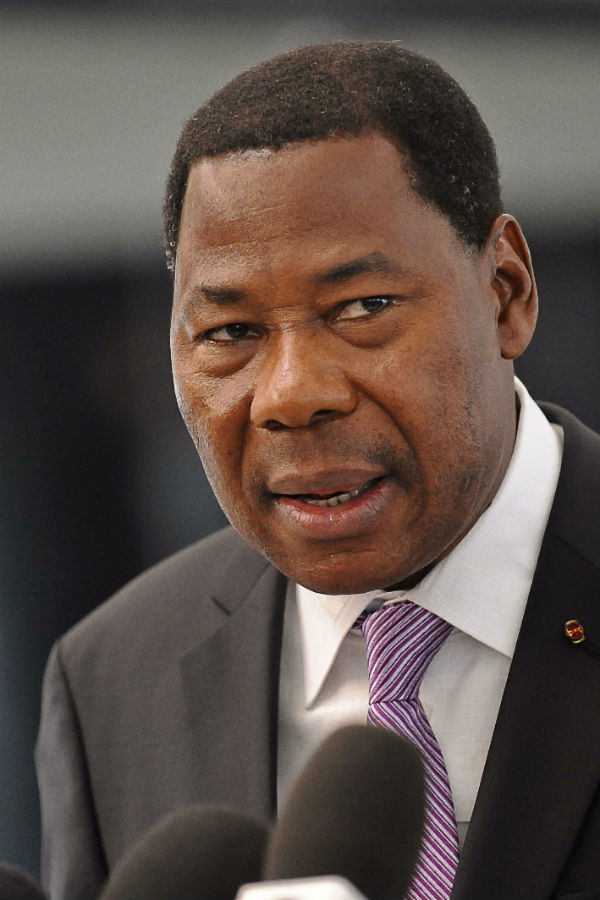 Benin holds a unique place in Africa’s democratic landscape. In 1990, after nearly two decades of Soviet-backed rule by Major Mathieu Kérékou, Benin held a national convention to rewrite its constitution and to introduce multi-party elections. This set a precedent that was followed by 15 other African countries in subsequent years. Since then, Benin has enjoyed four peaceful transfers of power, even voting its former strongman (Kérékou) two turns at the helm between 1996 and 2006. Kérékou died in 2015. But following April’s controversial elections, two of Benin’s other former presidents, Nicéphore Dieudonné Soglo (1991-1996) and Thomas Boni Yayi (2006-2016), have become vocal in their criticism of current President Patrice Talon, calling for him to reconsider restrictions on political parties. Yayi’s home in the Cadjéhoun neighborhood of Cotonou became the focal point for protests but is presently surrounded by Benin’s security forces and his family members are being denied access.

The Emergence of Patrice Talon

The relationship between Yayi and Talon was not always contentious. Prior to 2012, the two men shared a mutually beneficial relationship in which Talon financed Yayi’s political ambitions while receiving rights to operate Benin’s cotton industry and its import center at Cotonou. In part through this relationship, Talon, now 61 and one of Africa’s 15 richest people, became known as the “King of Cotton,” while Yayi won two presidential elections. Having once dreamed of being a pilot before failing his medical exams, Talon instead made a fortune capitalizing on connections to Benin’s political elites as the country liberalized its national industries in the 1990s and 2000s. 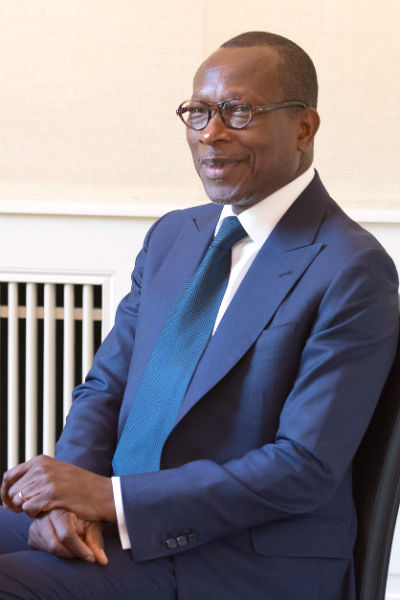 Things turned sour when Talon was accused of embezzlement in 2012, forcing him to flee to France. While there, he was charged in absentia with plotting to poison Yayi in order to seize power. Whether these charges were politically motivated or not remains the subject of speculation. However, in a show of independence, Benin’s courts dismissed the charges. Yayi eventually fully pardoned Talon, allowing him to return to Benin in late 2015.

Once back in the country, Talon went on to seek and win the presidency as an independent in Benin’s 2016 elections. Talon was hailed by young voters as a new kind of Beninese politician, unafraid to display his own wealth while promising to accelerate Benin’s turn to free-market entrepreneurialism. He looked to domineering, if polarizing, African leaders like Rwanda’s Paul Kagame for inspiration.

Paradoxically, Talon accused one of his opponents, Sébastien Ajavon (who had supported Talon during the runoff vote but planned to run again in 2021), of a crime (drug-smuggling). Ajavon, the third richest man in Benin, sought asylum in France. The courts, as they had with Talon, dismissed the charges. Talon, however, did not open the door to Ajavon’s return. Instead he sought to gain control over Benin’s judiciary.

In May of 2018, Joseph Djogbénou, Benin’s Minister of Justice, Legislation, and Human Rights, and formerly Talon’s personal lawyer in the poisoning case, began pushing for the creation of a special court to prosecute terrorism and economic crimes. The Cour de Répression des Infractions Économiques et du Terrorisme (CRIET) was installed in August 2018 and re-prosecuted Ajavon in absentia, sentencing him to 20 years in prison with no possibility for appeal. The African Court on Human and Peoples’ Rights in Arusha condemned the resulting conviction in March 2019 along with the very existence of CRIET and ordered Benin to revoke the decision within six months. To date, Benin has declined to do so. Meanwhile, in June 2018, Talon promoted Djogbénou to the head of Benin’s Constitutional Court. Like the majority of Talon’s appointees, Djogbénou is from Benin’s southern Gbe-language speaking region, a trend that since his election in 2016 has deviated from Benin’s tradition of regional balance in appointees. 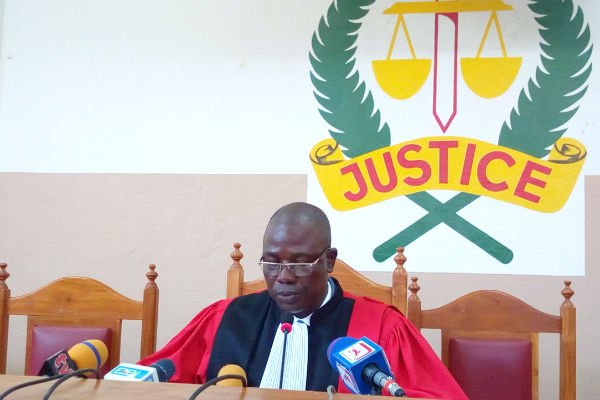 Talon tried and failed twice in 2016 and 2017 to win the National Assembly’s approval of a host of constitutional changes—which included guaranteeing impunity for presidents and legislators and restricting presidents to a single, but extended, term (6 years rather than 5). This included allegedly going so far as to bribe legislators. After this, Talon began relying on Djogbénou’s rulings to approve his alterations to Benin’s laws and institutions. Members of Benin’s National Assembly who opposed Talon’s proposed 2017 changes to the Constitution feared that he was attempting to rush through the establishment of a “new” republic, which would have reset presidential clocks, opening a path for Talon to stay in power until 2028. In January of 2019, the Constitutional Court struck down the right of public workers to strike, which Talon had viewed as an obstacle to his free-market reforms.

The present crisis arose in part when the Constitutional Court ruled that political parties required a “certificate of conformity,” a stipulation not found in the country’s electoral laws. This equivocal obstacle, combined with exorbitant registration fees ($427,000), ended in the National Electoral Commission only approving two political parties—both aligned with President Talon—for the April 28 elections. While Benin’s political landscape has long been characterized by its hundreds of feeble political parties, the widespread supposition is that these maneuvers were designed to secure the authority of Talon—who now plans to run for reelection in 2021.

The present crisis arose in part when the Constitutional Court ruled that political parties required a “certificate of conformity,” a stipulation not found in the country’s electoral laws.

April 28 proved to be a dark day for Benin as only 27 percent of the country voted, less than half of the percentage who turned out in 2016 when Talon won 65 percent of the vote. In the process, the government shut down the internet, harassed journalists, and cleared protestors with water cannons, tear gas, and live ammunition—all measures that violate Benin’s constitution. Djogbénou’s Constitutional Court certified the election results despite “some irregularities.” Prior to the election, Benin’s press freedoms had already been under threat with the government utilizing new laws to detain and charge journalists accused of spreading what it deemed to be “false information.” Even Talon acknowledged that the election and its aftermath looked bad for Benin, saying it made him “very uncomfortable.”

Benin’s security forces are currently under pressure for having used deadly force on protesters. However, the extent of Talon’s control over the military and police remains to be determined. The Army and Republican Guard were called into the streets of Cotonou when the police fled the scene as the protests grew. It is umnclear who then gave the order for the military to open fire, although some have pointed the finger directly at Talon. The decision to use live ammunition angered many in the military. Moreover, military leaders have suggested that they will not follow Talon to the edge of the world nor will they arrest former heads of state like President Yayi—a fear which originally sparked the Cotonou protests. Candide Azannaï, Benin’s previous Defense Minister and now an opposition politician, has recently asserted his faith in the professionalism of the country’s security forces. Nonetheless, expectations are that Talon will continue to attempt to leverage the police and military for his political purposes. Accordingly, the country’s security sector leaders will likely face growing pressure to become politicized, undermining the independent role of security forces in a democratic society.

Return of the Big Man in Benin?

While Benin’s oversight institutions have proven to be weak, Talon does face constraints. The business mogul turned president needs international investment, imports, and tourism to continue to flow in order to maintain economic stability. Benin’s economy has grown by over five percent the previous 2 years. Not only does April 28 threaten this growth, but so does the recent kidnapping in the country’s far-north Pendjari National Park. While other leaders might seek to pivot attention to the northern border and thereby seek to justify an expanded executive and security state, Talon lacks a military background and cannot afford to stoke fears that may dampen Benin’s economy.

If Benin’s recent problems scare away visitors and investment, Talon may be in trouble, meaning it is in his interest to quell things quickly and to work to re-legitimize Benin’s democratic institutions. He took a small step toward that on May 20 when he addressed the nation and promised to reinforce the north’s security while working with the country’s political class to resolve the democratic crisis. Perhaps he is just buying time until another option becomes available. Prior to April 28, Talon had already begun pursuing closer ties to China and Russia, allowing China to leapfrog Beninese and French bids to develop a major railway, and moving to coordinate with Russia on trade and natural resource exploration.

In early May after the election violence, ECOWAS’ chairman, Nigerian President Muhammadu Buhari, dispatched two envoys to Benin who pressed Talon to pursue a peaceful dialogue in order to allow the opposition to participate in the democratic process. According to its protocols, ECOWAS is obligated to intervene in instances of democratic backsliding as it did diplomatically and then militarily in Gambia in 2017. Some members of ECOWAS have suggested sending a fact-finding mission to Benin, which could then lead to the issuance of an ECOWAS resolution. ECOWAS’s backbone, Nigeria, has significant economic leverage over its neighbor Benin. It is estimated that 20 percent of Benin’s GDP comes through the informal re-export trade with Nigeria. Periodically in the past, Nigeria has tightened its western border, slowing Benin’s economy. Over the past year, Talon had been working with Nigeria to streamline border operations. However, to date, the international community has not responded to Yayi’s most recent call for intervention.

In the Belly of the Dan 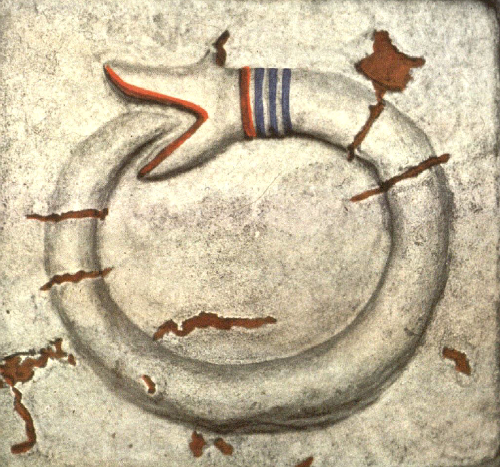 A depiction of the serpent deity Dangbe.

The meaning of Dahomey, Benin’s former namesake until 1975, is “in the belly of the Dan”—the serpent deity (Dangbe) to whom Vodun shrines are still found in places like Ouidah (Talon’s hometown). Often, this image of power, life, and death was symbolized by a python consuming its own tail—an apt metaphor for an empire built upon the Atlantic slave trade. Today, this imagery of a serpent’s self-mutilation might characterize Benin’s self-inflicted political crisis. With the national legislature, for the time being, captured by the executive branch, the question is how Benin’s remaining democratic institutions—civil society, the media, civil service, and security sector—along with ECOWAS and international partners, can extract Benin’s metaphorical tail from the serpent’s mouth. By so doing, they would also help to uphold Benin’s democratic legacy.

Mark Duerksen holds a doctorate in African Studies from Harvard University and has previously taught at Hunter College in New York and the African School of Economics (ASE) in Benin.