President Omar al Bashir’s declaration of a year-long state of emergency in Sudan indicates that he has opted, for now, to take the route of greater repression to quell the popular protests that have been unfolding across the country since December 2018. The initial response from Sudanese citizens, however, has been even more protests. These protests are being led by Sudan’s professional associations and large youth population who are chafing for more economic opportunity and political freedoms after 30 years under Bashir’s rule.

The emergency declaration was accompanied by the dissolving of state governments and the appointment of military or intelligence officers as new governors in the country’s 18 states.

These actions should be assessed from the perspective of Bashir’s political base. Bashir’s long tenure in power can be attributed to his cultivation of three main pillars of support: the military, the National Congress Party (NCP), and an embrace of political Islam. The current protests are straining each of these pillars and how they relate to one another, leading to some shifting alliances.

Bashir’s appointment of military and intelligence leaders as state governors and of Defense Minister Awad Ahmed Ib Auf as his first vice president, while he retains the role of defense minister, shows that Bashir is trying to consolidate his standing within the security institutions. Bashir was a Brigadier General in the Sudanese army prior to leading the 1989 military coup that brought him to power. Accordingly, the military is a natural base of support for the embattled president. Bashir also maintains support from the intelligence services, which is dominated by his own riverine ethnic group, the Ja’aliyin.  Some observers feel these appointments are also a means to set the stage for Bashir’s re-election in 2020.

Bashir is trying to consolidate his standing within the security institutions.

At the same time, Bashir’s heavy reliance on the security services opens the door for him to hand over power to the Army as occurred following the uprising of 1985 when power transitioned to the minister of defense, Abdel Rahman Swar Al-Dahab. As happened then, such a transition could involve the transfer of leadership to a respected personality who will oversee the formation of technocratic government. This option may be appealing to Bashir as the Army may be the only institution that would provide him with strong guarantees against prosecution should he resign.

An attractive exit package that would allow Bashir to depart with dignity would be a key component of any scenario involving Bashir stepping down. Bashir is less worried about the indictment of the International Criminal Court than he is about his pride and the legacy of his 30 years in power. Part of this agreement would involve a commitment from a technocratic transitional government to not take any legal action against him if he decides to stay inside the country or to take refuge in a friendly foreign country. 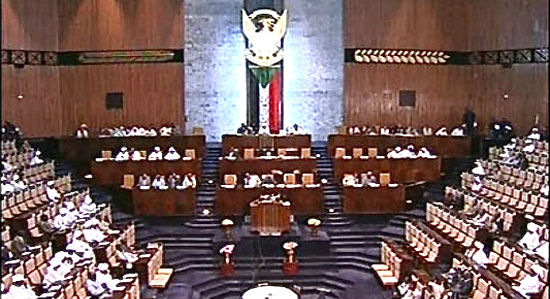 By consolidating support with the military, Bashir has effectively abandoned his ruling National Congress Party (NCP) and the hardline Islamists in it. This has set off a war within and between members of the NCP. The National Islamic Front (NIF), which later became the NCP, was a small party in the 1960s but it grew in the post-independence era. With its focus on students’ movements, using religion to appeal to the Sudanese population, and support from international Islamic movements, the NIF gradually grew more influential by winning more seats in the parliament. Now it dominates the parliament with 323 out of a total of 426 seats as a result of general elections in 2015 that many observers felt lacked credibility.

The NCP faces ongoing power struggles and is now divided into many factions. These include the Popular Congress Party established in 1999 by the NCP’s founding leader, the late Hassan El Turabi. There are also competing factions within the party led by the former first vice president Ali Osman and former presidential advisor Dr. Nafie Ali Nafie. While Osman and Nafie are veteran political Islamists that oppose the increasing encroachment of the military in the affairs of government at the expense of the dominance of Islamists, both compete for the leadership of Islamist movement in Sudan. Some analysts argue this rivalry has increasingly taken on ethnic lines between Nafie’s Ja’aliyin and Osman’s Shayqiyya groups. Ghazi Salah al-Din, a key intellectual of the early NCP also broke away from the NCP and formed his own party in 2013, the Reform Now Movement.

Bashir has not only disowned the NCP but he is now blaming its members for the failure of government to deliver improved living conditions during his 30-year tenure. Bashir has demonstrated abrupt shifts in allegiances previously, such as his hot and cold relationship with Hassan El Turabi.

Speculation is now rife that Bashir may form his own political party or that displeased members of NCP may abandon the party and form a new political party. As the NCP has been surviving on the power and resources of the state, some believe its political base will rapidly erode after being abandoned by Bashir. If so, the NCP could face the same fate as that of President Gaafar al-Nimeiry’s Socialist Union Party that vanished after the coup in 1985.

The appointment of Ahmed Haroun as deputy chairman of the NCP (vested with the powers of the chairman) has been particularly divisive for the party. Like Bashir, Haroun is indicted by the ICC and does not hail from the hardcore Islamist leadership of the party. Most ideological members of the NCP are not supportive of his appointment and this may further split the NCP.

It is widely believed that Bashir declared the state of emergency to give himself more latitude to quash the protests. Just as important, however, is the prospect that he will use the Army to confront the forsaken hardline Islamists in the NCP.

The protesters have explicitly expressed their dismay at the politicization of Islam.

This factor taps the underlying tension regarding the role of Islam in Sudanese society. Although Islam is the dominant religion in Sudan, Islamic fundamentalism only arrived in the country with the NCP in 1983. By rejecting the country’s diverse reality, political Islam has failed to bring about Sudan’s promised renaissance. Instead, Sudan has seen its place on most global indices decline. Sudan is listed 167th out of 189 countries on UNDP’s Human Development Index and 172th out of 180 countries on Transparency International’s Corruption Perceptions Index. The waning of political Islam is apparent in its absence in the slogans and articulated political agendas of the protesters.

The Sudanese population has historically embraced Sufism, which domesticates and internalizes the teaching of Islam to the African context, which is characterized by tolerance and accommodation. The protesters have explicitly expressed their dismay at the politicization of Islam. However, it remains to be seen how the post-protests arrangements will address the link between religion and the state in Sudan’s political marketplace.

One of the slogans of the Sudanese protesters—”Just fall, that is all”—spelled out in tear gas canisters. (Photo: Mohamed Gamal)

The key driver for change in Sudan is, of course, the popular peaceful protests that have been held across 35 urban areas in the country since December 2018. Led by middle-class professions, unions, women and youth, the protesters’ call for an end to Bashir’s 30-year rule has resonated among many within Sudanese society, including the families of the ruling party, the national army, the intelligence agencies, and other uniformed services. Women, in particular, have participated in sizeable numbers. Women protesters have also indirectly showed their rejection of Islamist fundamentalism by dressing in Sudanese dress with the traditional tobe headscarves rather than the strict hijab dress as prescribed by ultra-orthodox Islam. The depth of the protests’ popular support is a key factor driving the recalculation of the pillars of power within Sudan.

Notably, the protests in Sudan are led by non-Islamist forces. Moreover, they are nonviolent and well organized with a clearly articulated political agenda. Maintaining the peaceful nature of the protests will be key to sustaining this support. This will be more difficult if the security forces increase their use of force. Adding to the complexity is that disgruntled members of the NCP may join the protests, which may trigger violent confrontations.

The intricate internal dynamics that are reshaping the pillars of power in Sudan make it difficult to predict how the current crisis will unfold. The peaceful protests calling for a transitional, technocratic government leading to genuine elections are an attempt to provide an alternative pathway to stability and peace in Sudan. Doing so would be a break from Sudan’s historical legacy of power changing only through uprisings and military coups d’état.