Solidarity in Peace and Security: The Nordic-African Partnership

In June 2017, the 16th annual Africa-Nordic Dialogue convened in Abuja, Nigeria. That same month Norway hosted talks between the Government of South Sudan and its opposition, the first time the warring parties had met face-to-face since July 2016. In neighboring Finland, the Burundi government and its opponents were meeting behind the scenes in negotiations spearheaded by former Finnish President and anti-apartheid campaigner Martti Ahtisaari.

This confluence of events was not a one-off coincidence, but rather part of a long tradition of Nordic-African solidarity. The Nordic countries (Denmark, Finland, Iceland, Norway, and Sweden) have a history of engagement in Africa dating back to the struggles against colonialism and apartheid. Initially, the Nordic countries focused on supporting African liberation movements. This later expanded to address the challenges of governance, development, and human security, with a heavy focus on peacekeeping and peacebuilding.

Today, Nordic-African relations are built on the values of democracy, solidarity, and holistic African development. Much of the emphasis of the Nordic model of engagement has centered on building African capacity through long-term technical assistance.

The Roots of Solidarity

Nordic-African solidarity is rooted in the century-old Nordic missionary presence in southern Africa. Unlike other Europeans that worked closely with colonial administrations, Nordic missionaries championed resistance to colonial rule. The church groups’ ties at the community level facilitated direct contact between African liberation movements and Nordic officials and helped shape an activist foreign policy in support of oppressed peoples. Trust in this partnership was further strengthened by the fact that the Nordic countries had no colonies in Africa.

With churches again in the lead, the Nordic anti-apartheid movement raised funds for the legal defense of thousands of imprisoned African political activists and provided aid for their families. Nordic civil society groups organized disinvestment campaigns against minority-ruled countries. Nordic schoolchildren participated in “Operation Day’s Work,” an annual fundraiser for children in refugee camps in southern Africa. The concerted efforts of trade unions, churches, and civil society put pressure on Nordic leaders to sustain engagement in Africa. Relatively large numbers of African refugees in the Nordic countries further galvanized popular sentiment. The Nordic education system emphasized “solidarity with the oppressed,” and Nordic politicians called on their citizens to “identify with struggles for self-determination.”

All this translated into significant Nordic support for African movements and causes, totaling approximately $4 billion between 1961 and 1986. These contributions at times represented over half of all Nordic non-military expenditures. One notable investment was to the Solomon Mahlangu Freedom College (SOMAFCO), established in 1975 in Tanzania. It educated thousands of South African exiles and provided leadership and vocational training. SOMAFCO, now a youth leadership trust, counts among its ranks distinguished alumni including South African cabinet minister Lindiwe Zulu and Henry Makgothi, the late deputy secretary general of the ruling African National Congress. Nordic development agencies and NGOs also built a hospital, farm, and training center on the site and supported many of its teachers and medical workers.

Nordic contributions to shape the evolution of the African Peace and Security Architecture built on a model of engagement that fosters healthy civil-military relations, respect for human rights, strengthened civilian and military peacekeeping capabilities, and collaborative security. Demonstration of long-term commitment, transfer of knowledge, local ownership and leadership, and flexibility are important features of the Nordic countries’ approach.

Yvonne Akpasom, who worked closely with Norway on peace and security issues, is head of the peace and security unit at the German Agency for International Cooperation Support Programme to the Economic Community of West African States (ECOWAS) Commission. She notes that Nordic countries are regarded as neutral and trusted actors, largely without a vested agenda, but “wanting to genuinely promote and contribute to international public goods, ideas, and values. In this regard, they have played an active and visible role on humanitarian issues, peacekeeping, peacemaking, and peacebuilding, which lie at the heart of their engagement with Africa.”

In 1995, Norway established the Training for Peace Program (TFP) to support the Southern African Development Community (SADC). By 1997, the program had engendered new regional thinking on security that culminated in intensive SADC-wide consultations on developing the Southern African Regional Security Architecture, funded by Denmark and Sweden. These consultations identified building regional peacekeeping and peace support capabilities as a core priority. TFP initiated six lines of effort to achieve these goals:

In 2001, TFP expanded to the rest of Africa through a strategic partnership with the East African Standby Brigade and the Kofi Annan International Peacekeeping Training Center. In the 20 years since its establishment, TFP has trained 17,980 military, police, and civilian peacekeepers. The program also made a significant impact on doctrine. Seminal policy documents, including the Civilian Dimension of the African Standby Force and Protecting Civilians in African Union Peace Support Operations, were incorporated into the African Union’s operational procedures.

Nordic countries are regarded as neutral and trusted actors, largely without a vested agenda.

TFP is seen by African partners as an African initiative—a core goal of the Nordic assistance model. From its inception the program had only one Norwegian partner, the Norwegian Institute for International Affairs (NUPI), which worked with four African institutions in Southern Africa and later, East and West Africa. “Building human and institutional capacity was the driving focus,” says Kasumba. “Even more interesting was the fact that the Norwegian side also engaged African partners in shaping and informing their approach toward Africa in the peace and security sector. … They were never distant and the African side felt that our work, and our input, was really valued as implementing agencies on the ground.”

Kwezi Mngqibisa, who represented the South African-based African Center for the Constitutive Resolution of Disputes in the TFP partnership says that “the local capacity that has been built over the years in Africa serves as a testament of the work carried out by Nordic and African partners. … Most peacekeeping training today is done by Africans. … [As a result], capacity has become less of a problem than say financing or logistics.”

Coordination with other Nordic initiatives is also central. The TFP effort, for example, was reinforced by other programs, such as the Nordic Defense Cooperation (NORDEFCO) initiative, which pursues comprehensive approaches to security issues, including:

This systematic approach leverages Nordic resources to build African capabilities at both the bilateral and regional levels. 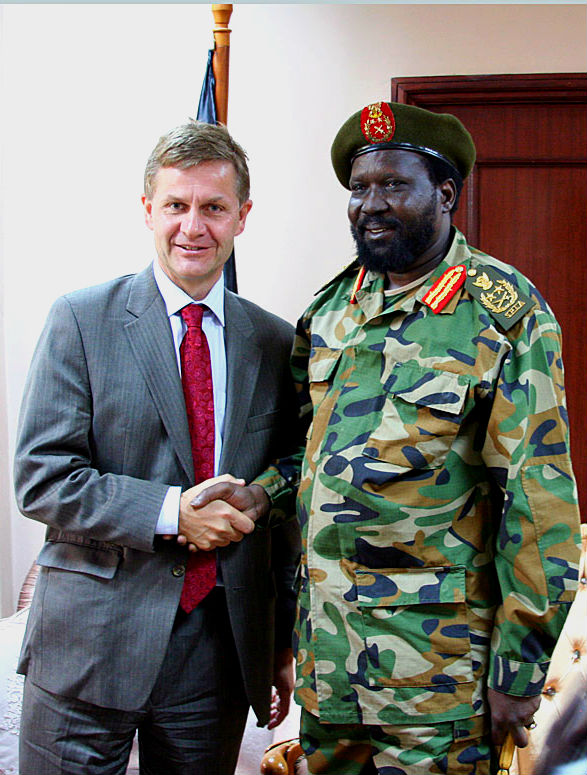 Erik Solheim, Norwegian Minister of the Environment and International Development, and Salva Kiir, President of South Sudan and Vice President of Sudan, during a visit to Sudan in 2009. Photo: Stein Ove Korneliussen.

Norway’s role in the 2005 Comprehensive Peace Agreement between the Government of Sudan and Sudan People’s Liberation Movement (SPLM) is emblematic of the Nordic model. It was built on leadership development and people-to-people peacebuilding. Key activities included the 1999 Nuer-Dinka Reconciliation Agreement, several discreet intra-SPLM agreements between 1996 and 2003, and a military ceasefire in the Nuba Mountains in 2002. These were vital building blocks for the talks that eventually ended 50 years of civil war. Norway also used people-to-people peacebuilding, discreet engagement, and leadership development in supporting peace talks between Uganda and the Lord’s Resistance Army and between Ethiopia and Eritrea, as well as in Burundi, Somalia, and again in South Sudan following the resurgence of conflict in 2013.

The Nordic states view development and security policies as interdependent and stress the importance of citizen security as opposed to regime-based security. Therefore, in addition to strengthening collaborative regional security, Nordic countries invest heavily in peacebuilding processes. The Nordic peace model involves back-channel diplomacy, indirect third-party facilitation, and direct mediation. It has its origins in Norway’s facilitation of Israeli-Palestinian talks leading to the 1993 Oslo Accords, lessons of which have been adapted to African contexts.

As is the case with the TFP, Nordic peacebuilding aims to integrate the full range of Nordic capabilities into a coherent assistance program in support of the African Peace and Security Architecture. One notable tool is the Finnish-funded African Peacebuilding Coordination Program (APCP). Established in 2007, the APCP helped operationalize the AU’s Panel of the Wise by facilitating coordination between it and sub-regional mediation mechanisms including the ECOWAS Council of the Wise, the SADC Panel of Elders, and the Mediation Contact Group of the Intergovernmental Authority on Development. APCP also provides technical support to high-level mediators, and has trained over 200 young Africans for mediation roles in ongoing peace processes. The African Union Mediation Support Handbook, the AU’s official mediation framework, was developed with the support of APCP, building on best practices since 2007.

“The local capacity that has been built over the years in Africa serves as a testament of the work carried out by Nordic and African partners. … Most peacekeeping training today is done by Africans.”

The capacity developed in Africa through Nordic instruments such as TFP has contributed significantly not only to African efforts but also to United Nations initiatives such as the Civilian Capacity Initiative and the UN Police Strategic Guidance Framework Initiative. 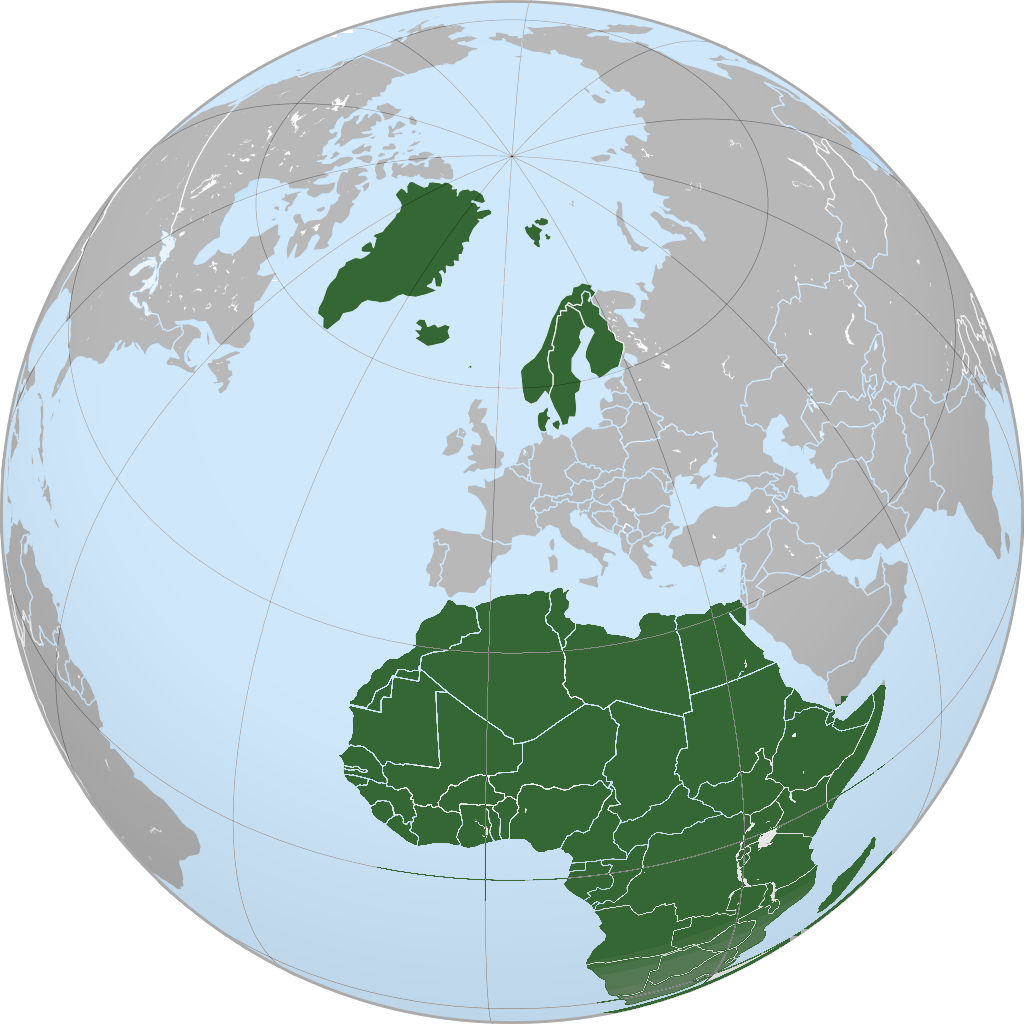 Using skills developed through these efforts, African partners established the African Peace Support Trainers Association (APSTA). This network of 16 peacekeeping training centers of excellence train civilian and military personnel getting ready for deployment in peace missions and conduct in-mission training and post-mission debriefs to capture lessons learned. Another African-led initiative includes a civilian standby force that generates civilian experts for the AU Commission and rapid deployment to AU peacekeeping missions. To strengthen these local efforts, Norway directly supports a number of posts in the AU Commission, all staffed by Africans.

The Nordic countries’ long partnership has centered on African interests, equitable development, collaborative security, and solidarity. Above all it has stressed long-term engagement and shared values. The Nordic countries’ reputation as a trusted partner and the focus on building local capacity, ownership, and leadership have created tangible and ongoing contributions to the increasingly vital collective security structures seen on the continent today.