Party Militias — A Threat to Security and Military Professionalism

Members of the Burundi ruling party’s youth militia—the Imbonerakure—chasing opposition protesters with whips and clubs in the presence of police. (Photo: AP/Berthier Mugiraneza)

Recent years have seen a rise in the deployment of party militias. They use violence to intimidate rival candidates and opposition constituencies to alter the political landscape in support of the party in power—a crude coercive tool to keep a population from challenging the status quo. While often associated with youth wings of a ruling party, these militias are typically not acknowledged by the party, affording plausible deniability for their actions.

“Party militias are a threat to constitutional democracy. They operate outside the legal chain of command, commit human rights violations, and rely on violence against civilians.”

Party militias operate outside the law with near-total impunity. They are often a prominent feature of elections, sowing fear on behalf of incumbents who find them handy when they believe they will be unseated, or when they evade constitutional term limits to entrench themselves.

Angola’s Popular Vigilante Brigades, Burundi’s Imbonerakure (“those who see beyond”), Cameroon’s President Biya’s Youth, Uganda’s Kiboko (“stick wielding squad”), and Zimbabwe’s Green Bombers fall into this category. Others have the appearance of being more “official” especially when they are operating in tandem with regular units or paid through state coffers. Côte d’Ivoire, Gambia, Nigeria, and Sudan offer examples.

Ruling party militias, therefore, are a disruptive adaptation to multiparty politics intended to shift the electoral playing field to one party’s benefit. In addition to undermining democratic principles of free and fair elections, party militias compromise the integrity of security sector institutions—via their collusion in violence against citizens or for their tolerance of this extralegal behavior. 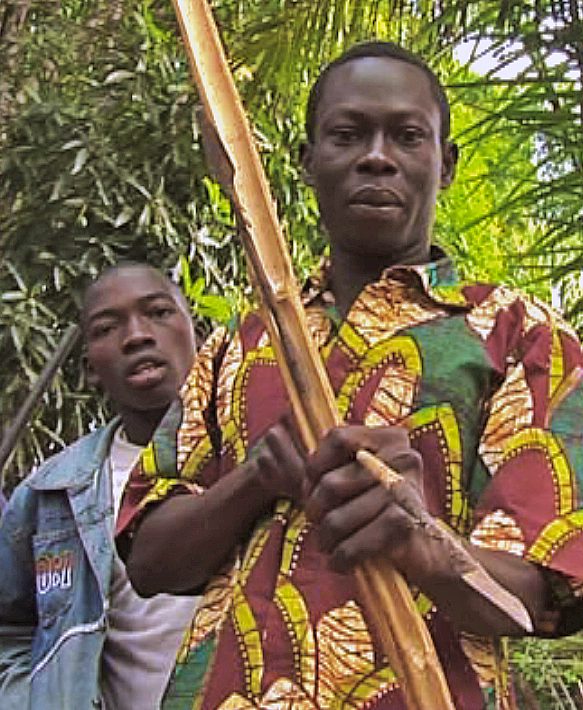 Some party militias exist intermittently and are primarily mobilized during periods of political tension. A good example is Uganda’s Arrow Boys. They were the tip of the spear in Uganda’s wars against the Lord’s Resistance Army but later became part of the ruling party’s campaign machinery in the 2010, 2016, and 2021 elections. They worked as constables, tasked with “managing voting” but were implicated in multiple incidents of violence.

An important subtext to these party militias is the role youth will play in Africa’s democratic development. Much of the push for democratic change in Africa is sustained by cohorts of 19- to 25-year-olds, reflecting the aspirations of Africa’s large and vibrant younger generation. They tend to be restless, risk-tolerant, and assertive. Paradoxically, this cohort is also a recruiting ground for party militias, creating an explosive mix that plays out in deadly encounters between youth militias and democracy activists.

As their main purpose is to tilt the electoral playing field, party militias are a threat to constitutional democracy. They operate outside the legal chain of command, commit human rights violations, and rely on violence against civilians.

The use of party militias can be traced back to Kenya’s Jeshi La Mzee (“army of the old man”), which inflicted destabilizing violence during the elections of 1992, 1997, and 2002 under President Daniel Arap Moi. Moi’s aim to link ethnic violence with multiparty elections in the minds of the public shows the lengths to which leaders are prepared to go to subvert democratic processes. He left a grim legacy. Kenya has witnessed militia violence in every poll since his departure.

The epitome of the modern party militia is Burundi’s Imbonerakure, which several UN reports hold responsible for criminal atrocities. The Imbonerakure is controlled by parallel chains of command running through the President’s Office, Ministries of State and Public Security, National Intelligence, and a faction of ruling party war veterans who call themselves the Committee of Generals. Two of them, General Gervais Ndirakobuca, whose nom de guerre is Ndakugarika (“I will kill you”), and General Alain Guillaume Bunyoni, the former Minister of Public Security and current Prime Minister, are under European Union sanctions for alleged human rights abuses. (Bunyoni is also on the U.S. sanctions list.) A 2017 law gives the Imbonerakure the status of a reserve force, further politicizing Burundi’s military, contrary to the Constitution and the guiding Arusha Accords.

Imbonerakure youth in Burundi, marching with the flag of the ruling CNDD-FDD. (IRIN/Desire Nimubona)

In preparation for the 2000 parliamentary elections, the ruling Zimbabwe African National Union-Patriotic Front’s (ZANU-PF) militias were created and trained by the National Youth Service (NYS) to “transform and empower youths for nation-building through skills development and leadership training.” In reality, the NYS built the Green Bombers, named after their olive-green military fatigues and often described as ZANU-PF’s “eyes, ears, and fists.” They underwent rudimentary training in military tactics, interrogation and surveillance, and the history of Zimbabwe’s armed struggle. In the field, they worked alongside intelligence operatives, police, and war veterans. They have been implicated in human rights abuses in opposition strongholds in every election since 2000, at times preventing the opposition from even campaigning.

The NYS was disbanded in 2017 after President Robert Mugabe’s downfall in a coup. However, the cabinet reintroduced the group in April 2021 as a “two-way partnership between the ministries of youth and defense and war veterans.” Civil society leaders believe it is being revived with an eye toward the next election and as a patronage tool for unemployed youth. As proof that old habits die hard, a senior ZANU-PF Central Committee member admitted, “If we don’t do this, we might as well kiss goodbye the youth vote in 2023.”

In Togo, one of the party militias loyal to the ruling Union pour la République went by the name Death Squadrons. It was formed in 2005 after the death of President Faure Gnassingbé’s father, Étienne Gnassingbé Eyadéma, who had ruled since 1967. With militias and the army firmly on its side, the regime was able to force through the deeply unpopular dynastic transition from father to son. Soldiers and militiamen, recruited from the Gnassingbé’s Kabyé ethnic group, also helped the regime weather 15 months of massive, nationwide protests in 2017 and 2018 demanding the reintroduction of term limits and Faure Gnassingbé’s departure. Faure Gnassingbé’s strategic use of violence and tight control of state institutions handed him another controversial term in February 2021 amid more protests, to which he responded by deploying soldiers to surround the homes of opposition leaders and block access to parts of the capital.

Folding Militias into Parallel Forces: Another Stage of the Same Problem

Some party militias grow into sizeable parallel forces that take on a new role—to keep the military in check if it becomes too independent and professional. In Tunisia, for example, Zine El Abidine Ben Ali, who fell amid popular protests in 2011, had systematically inserted youth militias into the National Police, National Guard, and Presidential Guard. Over time, the ranks of these agencies were dominated by members of Ben Ali’s youth militia, who were better equipped and paid than the military.

Sudan’s Field Marshal Omar Hassan Al Bashir, who was ousted from power in 2019, used a similar playbook as Ben Ali. His waning support within the Sudan Armed Forces (SAF) dated back to 2010 when internal wrangling over South Sudan’s separation reached fever pitch. To reassert control, he turned to the 40,000-strong Rapid Support Forces (RSF), which were better paid, trained, and equipped than the SAF. They had grown out of the tribal Janjaweed (“devils on horseback”) militia, that brutally put down an uprising in Darfur in 2003. Described as “men with no mercy,” many Janjaweed leaders like Ali Muhammad Ali Abd Al Rahman (“Ali Kushayb”), Abdel Raheem Muhammad Hussein, and Ahmad Harun, were indicted by the International Criminal Court for crimes against humanity.

“The RSF was part of a large patronage machine and still controls a network of gold mines. … It remains a key stumbling block to Sudan’s democratic transition.”

Bashir granted the RSF the status of a regular force in 2015 and folded it into the SAF in 2017 as a “praetorian guard” with a separate command, budget, and superior equipment, but operating outside the law. In addition to its primary task of protecting Bashir from coups, the RSF was part of a large patronage machine and still controls a network of gold mines that produce one-third of Sudan’s gold. It also has numerous investments, including in banking, livestock, construction, and private security. In 2019, the RSF boasted of its “ability” to pay police salaries from revenues generated by supplying troops to fight alongside the Saudi-led alliance in Yemen. It remains a key stumbling block to Sudan’s democratic transition.

Salva Kiir’s “Tigers” had grown into a division by 2020. They, too, are part of an extensive patronage structure as shown by a 2015 auditor general report that found that top commanders had amassed massive amounts of wealth through various schemes. In one example, the Central Bank allocated $993 million to import items from cooking oil to drugs. However, the money was siphoned off by top commanders and the materials were never delivered.

In Uganda, there are at least 30 overlapping security outfits in the country, many of them extralegal like the Amuka Boys, Black Mambas, Kalangala Action Plan, and Arrow Boys.

In recent years, there have been concerns over Uganda’s Special Forces Command’s (SFC) alleged connections to other outfits like the Crime Preventers, a network of tens of thousands of volunteers. The Crime Preventers dramatically expanded the ruling National Resistance Movement’s (NRM’s) village-based surveillance network. Described as a parallel structure, Crime Preventers members are deployed in a wide range of tasks from which they can be “disowned at any time.” They were involved in human rights abuses during the 2016 elections.

Most recently, the Crime Preventers were activated ahead of the 2021 polls, this time under the patronage of President Yoweri Museveni’s brother, General Caleb Akandwanaho, better known as Salim Saleh. While offering them $4 million for their welfare in 2018, Museveni said he regarded them as a “reserve force,” which did not sit well with some security professionals. However, the process of folding them into the UPDF Reserves started in February 2020.

Party militias pose an extralegal threat to African citizens. Moreover, they do so in a highly partisan manner posing a menace to peace and democracy in a growing number of African countries. Such armed groups merit greater scrutiny and legislation explicitly banning the recruitment and deployment of these non-statutory forces.

“Folding these party militias into the regular forces simply injects the partisanship of these armed groups into the statutory forces.”

If the force structures of the standing police and military are inadequate, then merit-based and transparent recruitment processes should be applied. Folding these party militias into the regular forces simply injects the partisanship of these armed groups into the statutory forces, undercutting security force professionalism and accountability while damaging the reputation of those in uniform.

Most African constitutions require uniformed forces to provide security for all citizens. This is a good starting point from which to center public debates on party militias.

Civil society leaders, media, and lawmakers should educate the public, develop legislation, and channel popular demands for higher standards. Fortunately, the empirical data shows that the vast majority of Africa’s rising officers take great pride in higher education, professionalism, learning from international counterparts, and maintaining strong public support. They will be receptive to consistent strategic messaging, diplomacy, and concrete actions that encourage them to respect their uniform and exercise ethical leadership even in difficult situations.