How Violent Extremist Groups Exploit Intercommunal Conflicts in the Sahel

Rising violence by militant Islamist groups in the Sahel is straining intercommunal tensions, threatening the foundations of social cohesion in the region.

A Fulani herder with his flock. (Photo: ISS)

Violence in the Sahel has accelerated in recent years, with violent events linked to the militant Islamist groups doubling every year since 2015. There were roughly 2,600 fatalities related to violent extremist organizations in 2019 alone. This escalating violence has increased instability in the Sahel and displaced hundreds of thousands of people. Less understood has been the role of violent extremist groups in stoking intercommunal violence, which simultaneously has been on the rise in the region. These groups have sought to profit from the increased insecurity and to use intercommunal tensions as a tool to boost recruitment. Left unaddressed, the escalation of intercommunal clashes could rapidly intensify the scale and complexity of instability in the region.

Tensions between pastoralists, semi-pastoralists, and sedentary populations have historically always existed. However, violence among them had remained relatively rare in the Sahel. This situation has changed with the rise of violent extremism in the region. Today, intra- and intercommunal rivalries increasingly involve armed violence that is exacerbated by militant Islamist groups. The worsening insecurity threatens the livelihoods of communities, reinforces their need for protection, and endangers the social cohesion that has characterized Sahelian society.

“Militant Islamist groups in the Sahel seek to penetrate the social fabric of village communities and take advantage of existing tensions between them.”

By targeting community leaders, extremist groups also aim to stoke intercommunal violence as part of a strategy to supplant local sources of authority and to leverage the resultant violence to advance their cause. To effectively counter violent extremism in the Sahel, every effort should be made to avoid conflating intercommunal conflict with violent extremism. Mistakenly doing so only intensifies a vicious cycle of violence and instability that propels both. Better understanding how these destabilizing forms of violence intersect with and differ from one another is central to developing specific responses to each.

Explaining the Rise in Intercommunal Violence

Understanding of the Link between Intercommunal Violence and Violent Extremist Groups

Confronted with growing insecurity, many rural communities in the Sahel have decided to organize themselves to fend off violent extremist groups and bandits by arming militias for their own protection. This has led to a complicated security scenario in which multiple armed groups—members of community self-defense militias, criminal gangs, and militant Islamist groups—are operating outside the bounds of statutory forces. At times, they have enhanced security. At other times, they have contributed to insecurity. This array of armed groups presents a challenge to national defense and security forces.

The increased presence of national armed forces and the foreign troops supporting them has, thus far, not stemmed the rise of militant Islamist violence in the region. With few tangible signs of improvement, some local communities doubt the effectiveness of these military deployments to restore security and peace. Indeed, national armed forces are also sometimes perceived as hostile occupying troops that are unable to protect populations. Such perceptions further reinforce the need for local self-defense militias or other sources of security from the perspective of local communities.

Further complicating matters, certain communities, notably the Fulani, are perceived as being supportive of jihadists. For these communities, accepting or tolerating jihadists may sometimes serve as a means of protecting their families and property – and is often tied to the free flow of goods and commerce through contested areas. This cooperation undermines security efforts while aggravating tensions with neighboring communities. These dynamics play into the hands of militant Islamist groups, since they are then able to exploit the stigmatization of the Fulani to further spur recruitment.

The Exploitation of Community Tensions by Violent Extremist Groups

Militant Islamist groups in the Sahel seek to penetrate the social fabric of village communities and take advantage of existing tensions between them. The founder of the Islamic State in the Greater Sahara (ISGS), Abu Walid al Sahrawi, recognized as far back as 2013 that intercommunal tensions present an opportunity to stir up social discord, weaken Sahelian societies, and establish the authority and legitimacy of militant Islamism. He believed that following foreign counterterrorism interventions, militant Islamist groups needed to forgo largescale operations and wait until intercommunal conflicts would break out to give them a religious, in this case Islamic, veneer and thereby solidify the relevance of groups like ISGS. By triggering social conflict, violent extremist organizations seek to establish their own governance space and present themselves as the most viable entity capable of providing security in the region.

Intercommunal violence also provides an opportunity for violent extremist groups to challenge traditional chiefs or other local authorities and proclaim themselves as peacemakers and social regulators. In the process, the whole social structure is turned upside down, upending longstanding social values and customs. Traditional village chiefs who seek to exercise their local governance functions are often hampered and threatened, and at times targeted in assassinations aimed at instigating intercommunal clashes. Their effectiveness and legitimacy are severely weakened in this new context of armed violence.

“[Abou Walid al-Sahraoui] believed that … militant Islamist groups needed to forgo largescale operations and wait until intercommunal conflicts would break out to give them a religious … veneer.”

By employing identity-based arguments to sharpen rivalries between communities, purposely ethnicizing tensions, violent extremist organizations seek to exacerbate social conflict between community-based armed groups that resist their influence. In this way, militant Islamist groups play communities against one another, imposing their laws through persuasion or coercion and promising impoverished youth immediate profits and a prosperous future. They then use religious indoctrination to justify their actions.

Growing social tensions also provide militant Islamist groups an opportunity to fuel criminality. When a village is attacked, whether by bandits, militias, or jihadists, the attackers will often resort to cattle theft. The practice of cattle raiding makes it possible for raiders to purchase weapons, ammunition, fuel, and do other business. Violence itself becomes an opportunity for enrichment.

The Rise of Identity-Based Militias

Militant Islamist attacks and the need to protect communities have led to the proliferation of self-defense militias with an “ethnic” base (Fulani, Bambara, Dogon, Mossi). The writ of these groups is highly fragmented, sometimes limited to just a few villages. This makes it difficult to map the armed groups in the Sahel and to identify those responsible for massacres. This proliferation of militias has, at times, been advanced by national governments, which have armed and supported some of them, including groups of traditional hunters known as Dozo in the Mandé languages and Koglweogo in the Moré language.

In one such example, the traditional Dozo hunters of the Dogon community in central Mali formed a militia, known as Dan Nan Ambassagou, when the Malian army and French troops asked them for help with their operations due to their knowledge of the terrain. At the request of the Malian government, this group also provided security for the presidential election of July 2018 in several districts in central Mali. This enabled the group to legitimize its existence and organize itself into an armed militia to protect itself from other armed groups. However, multiple attempts to disarm Dan Nan Ambassagou and other Dozo militias after the presidential election have failed. Identity-based militias, such as Dan Nan Ambassagou, frequently perceive other communities, especially the Fulani, as “jihadists’ accomplices” and attack these communities without distinction following provocations. This was the case when Dan Nan Ambassagou massacred 160 Fulani civilians in Ogossagou in March 2019. 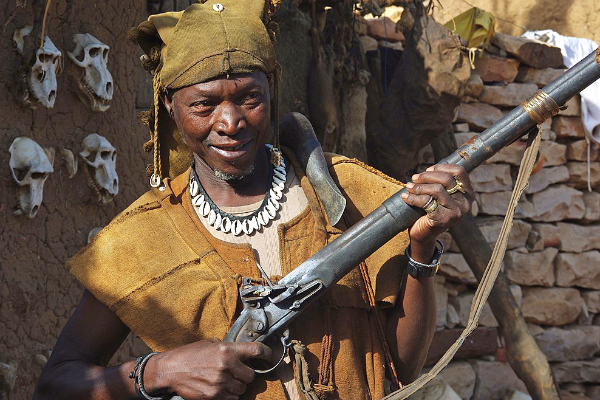 Similarly, the Koglweogo militias have assumed law enforcement powers and apply their own justice in several parts of Burkina Faso. These militias are said to be responsible for the massacre of between 49 and 210 Fulani in Yirgou in January 2019, in response to the assassination of a Mossi chief and two of his sons, who were themselves Koglweogo members. The lack of formal judicial processes following these killings has raised many questions about the roles of militias and the complacency of soldiers, many of whom also accuse the Fulani of being jihadists.

These events highlight the challenges of distinguishing between community militias, violent extremist organizations, criminal groups, and gangs. This confusion plays into the hands of militant Islamist groups who are able to exploit the growing insecurity and traditional leaders’ concerns that their communities are not being adequately protected by state security forces.

A Dynamic That Risks Worsening Social Conflict in the Sahel

The “militia-zation” of society leads to a perilous fragmentation of security. The fraying of social tolerance wrought by episodic reprisal attacks between communities is all the more worrying as it risks turning into a larger internal conflict. This perspective is reinforced by the fact that governments and their armed forces use certain militias for their own operational needs or to fill the security vacuum. Some officers and cabinet members in Bamako and Ouagadougou who allegedly support the creation of paramilitary groups have encouraged the arming of Dozos and Koglweogo to counter the advance of militant Islamist groups at home.

The reigning instability and insecurity in Mali and Burkina Faso are likely to become further entrenched with the proliferation of identity-based militias and violent extremist groups who want to take advantage of the worsening intercommunal relations. The revenge-reprisal spiral exposes Sahelian societies to social fragmentation, which threatens to erode national cohesion. As things stand, if nothing is done quickly, it is a safe bet that intercommunal violence will contribute to further instability and population displacement.

The inability of the Sahelian states to provide security for rural communities is a major contributor to the growing social conflict, which is now being resolved by arms. The linking of Fulani to jihadists, and the reprisal massacres of which they are the target, only consolidates the Fulani’s feeling of stigmatization. This scapegoat logic threatens to cement a perception of the Fulani as the problem forged from their stereotyped warlike representations. Over time, there are concerns that this stigmatization may also spread to coastal West Africa, where the traditional relationship between pastoralists, often Fulani, and farmers is deteriorating. Fearful of extremist groups seeking to entrench themselves, the Sahel’s southern neighbors also worry about Fulani communities rallying to militant Islamist groups for protection.

How to Reduce Intercommunal Violence and Counter Extremist Groups

The complexity and entanglement of intercommunal violence and its causes makes it difficult to understand. This benefits the strategy of violent extremist organizations. It is crucial to unravel community rivalries from jihadist attacks, local score-settling, criminal activities, and banditry in order to address each appropriately. To weaken and stem violent extremism, it is necessary to restore social order and strengthen legitimate sources of authority through the resolution of intercommunal conflicts.

Any judicial response to episodes of intercommunal violence must be commensurate with the gravity of the crimes committed. To restore citizens’ trust in justice, careful investigations will need to be carried out and those responsible must be appropriately punished under the rule of law. This process will require increasing the security presence in regions where intercommunal violence is most concentrated.

Over time, all militias should be disarmed and demobilized so that only state actors are responsible for providing security.

“Intercommunal dialogues that have begun at the local level must be deepened and systematically extended to all territories.”

Intercommunal dialogues that have begun at the local level must be deepened and systematically extended to all territories. Led by legitimate mediators from civil society, such dialogues would facilitate constructive discussions based on community grievances, their perceptions, and the misrepresentations advanced by ethnicist propaganda. This would help to rebuild a positive citizen identity and safeguard national cohesion.

Since customary chiefs are responsible for ensuring the social cohesion of rural communities, governments should also collaborate with and protect them during intercommunal dialogues. To better fight the influence of militant Islamist groups and their ability to damage intercommunal relationships, it is necessary to strengthen and restore legitimate sources of authority to resolve intercommunal disputes as they arise.