Ghana’s elections offer lessons on how transparency and public trust in electoral institutions contribute to a peaceful transition of power, finds the Africa Center’s Dorina Bekoe.

On January 7, 2017, Ghana held its seventh presidential inauguration, a practice that has occurred regularly every four years since 1992. It marked the third time the party in power has changed—an unusual event in Africa, where nearly all countries hold elections, but the parties in power almost always remain the same. Among the continent’s 54 countries, only 19 African incumbent leaders from 11 countries have been voted out of office since the end of colonialism. These two feats alone—holding regular elections and changing the party in power—have helped institutionalize Ghana’s process of political transition through elections.

Yet, nearly a quarter century after embarking on the path of democratization, uncertainty prevailed prior to Ghana’s December 2016 elections, where the ruling National Democratic Congress’ (NDC) candidate, John Dramani Mahama, faced his chief opponent, the New Patriotic Party’s (NPP) Nana Addo Dankwa Akufo-Addo. Worryingly, just six months before the elections, many Ghanaians said that they greatly distrusted the judiciary and electoral commissions—two critical institutions for administrating a peaceful and lawful political transition. Violence had broken out during various electoral processes, and politicians and their affiliates regularly employed incendiary language during the campaign. Notably, the Electoral Commission (EC) identified 81 constituencies as hot spots. More narrowly, the police identified 5,000 polling stations (of the 29,000) as potentially volatile. In short, analysts could not definitively predict that Ghana’s political transition would proceed peacefully.

Despite the troubling signals, Ghana’s political transition ultimately went smoothly. While political operatives disputed certain election results and accused one another of rigging, all accepted the final result without any violence. What can explain this outcome? An analysis of Ghana’s political dynamics shows that in the months leading up to the election, critical actions undertaken by Ghana’s Electoral Commission, political leaders, and civil society averted a rocky transition.

Confidence Rises in the Electoral Commission

Surveys conducted in July 2016 and October 2016 by the Ghana Center for Democratic Development (CDD) illustrate the positive change in the EC’s credibility. Whereas in July, 58 percent of Ghanaians rated the Electoral Commission as prepared for elections, by October, the number had increased to 73 percent. This significant increase in positive perceptions by Ghanaian citizens can be attributed to the EC’s moves to improve the voter register’s credibility, implement continuous registration processes, and make it easier to vote.

The Electoral Commission took some highly visible steps to improve the credibility of the voter register.

Throughout the campaign, the opposition parties stoked suspicions of the EC’s neutrality. The NPP called for a new register after their investigation alleged that nearly 76,000 Togolese had crossed the border to vote in Ghana’s 2012 election. Notably, Togolese share ethnic and linguistic ties with the Volta region—an NDC stronghold. As a result, the EC’s December 2015 decision to improve the existing 2012 register instead of developing a new one was strongly criticized by the NPP.

The EC subsequently took some highly visible steps to improve the credibility of the voter register, especially as the elections approached. In June 2016, Ghana’s Supreme Court ruled that the EC remove approximately 57,000 voters that had used the National Health Insurance Scheme (NHIS) card to verify their identities, which the Court deemed illegal. The EC not only promised to delete those names and any additional names verified with the NHIS card, but also published the list of names online. The EC provided those on NHIS list chances to officially re-register in July and August. After this, 62 percent of Ghanaians rated the EC as having performed the re-registration well. Also in August, the EC launched its continuous registration process, which gave new voters a second opportunity to register. The CDD survey shows that by October, nearly 69 percent of Ghanaians rated the EC as having performed this function well, and 60 percent considered the register valid.

The EC also made it easier to vote. Through the Vote Transfer Exercise, Ghanaians could change their original polling station registration to a more convenient voting location (for example, from a home village polling station to one in the constituency where they worked). For the most part, this exercise proceeded well. The CDD October 2016 survey showed that 65 percent of citizens felt that the EC had performed this task well.

Despite the more positive view of the EC and its actions over the last half of 2016, many continued to worry that the elections would lack integrity. In both the July and October CDD surveys, only half of Ghanaians believed that the announced results would reflect the ballots submitted. In the October survey, a slight majority (54 percent) also thought that politicians would use violence in the elections. Still, a strong majority in the October survey felt that political parties should resolve electoral grievances through the court system (70 percent), rather than engaging in violent protests (5 percent) or even peaceful demonstrations (40 percent).

Increasing the Transparency of the Electoral Process

In contrast to the Strong Room, the National Collation Center is accessible to all members of the political parties, civil society, the media, and election observers to witness election officers’ reports on voting.

In the past, the “Strong Room,” situated in the EC’s headquarters, served as the venue to collate and verify results. But its restrictive nature generated suspicion. While the Strong Room brought the political parties together, it was also opaque and accessible to only a few political party and electoral commission representatives—generating rumors of ongoing rigging. An important reform after the 2013 Supreme Court case, where the NPP challenged the victory of the NDC in the 2012 elections, included replacing the Strong Room with a National Collation Center (NCC). In contrast to the Strong Room, the UN Development Program–funded NCC allows more transparency, as it is accessible to all members of the political parties, civil society, the media, and election observers to witness election officers’ reports on voting. Each presidential candidate could assign two members to the NCC, while each parliamentary candidate could post two representatives to the Constituency Collation Centers (CCC). In another first, the EC announced that it would allow TV cameras at the NCC. Many media companies broadcasted live from the NCC during the 2016 election. The EC had also promised to publish the results from the polling stations on its website, though this ultimately did not happen as hackers attacked its website. Nonetheless, the EC made concerted efforts to reduce suspicions of the electoral results with increased transparency. 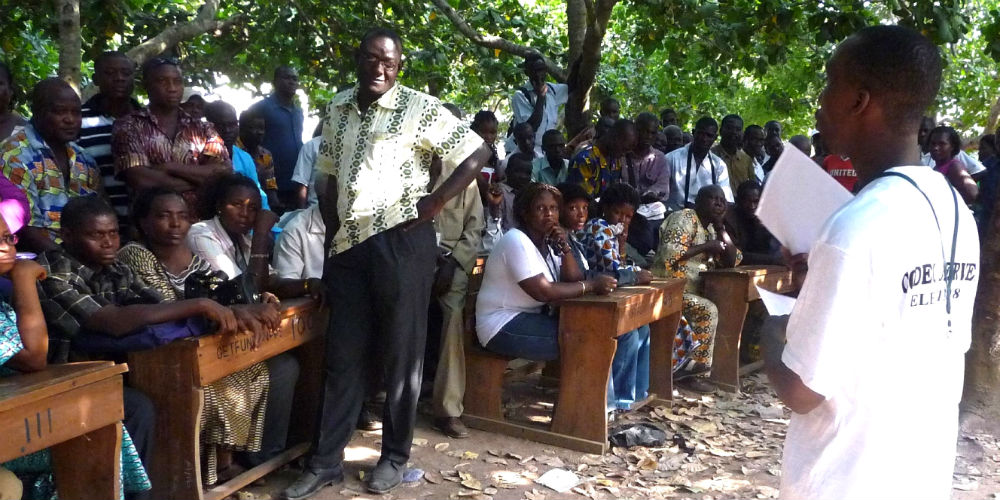 Even though the NDC disputed the NPP’s win until the last minute, without the consensus and transparency of data, the environment would likely have been tenser.

The NPP also undertook a version of PVT. Recruiting an information technology specialist from NASA, the NPP set up a system where they could take advantage of the new openness in the results reporting. The NPP required the two party agents in each of Ghana’s nearly 29,000 polling stations to send a set of results to the NPP agent at the NCC and one to the NPP agent at the CCCs. In so doing, the NPP compared official results with the results the party compiled. As these matched, it provided the party with some assurances of the credibility of the official tabulation. Because their results so closely tracked the polling station data, the NPP announced within eight hours of the polls closing that Akufo-Addo had won by nearly 10 points.

Members of the media, other political parties, and civil society organizations also closely tracked the results. By the early morning of December 9, the EC and the NDC remained the only major stakeholders that had not announced results. Even though the NDC disputed the NPP’s win until the last minute, without the consensus and transparency of data, the environment would likely have been tenser. 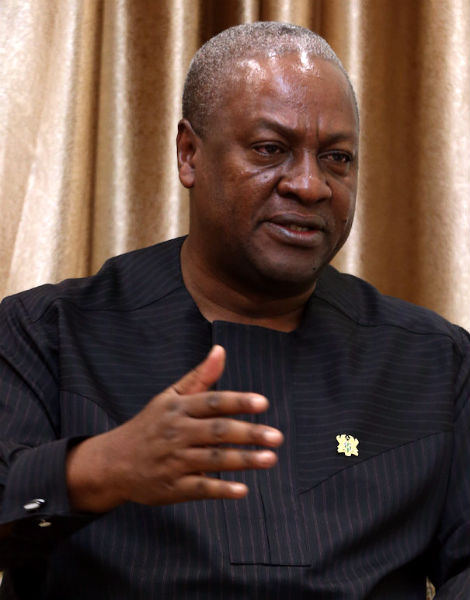 John Dramani Mahama: “We will accept the outcome of the election whether positive or negative.”
(Photo: Website of Ali Khamenei.)

Ghana’s successful electoral process in 2016 showed that leadership matters. As frustration began to mount due to the EC’s failure to declare a winner two days after the elections, Mahama urged calm and affirmed his faith in the EC: “I want to assure the nation we will accept the outcome of the election whether positive or negative.” By then, many had announced that the NDC seemed to have lost the election. Similarly, Akufo-Addo emphasized that “it is important that we remain calm. We have been through this before…. Let the EC do its works [sic].” These statements were similar to their joint promises in May 2013 that they would abide by the Supreme Court’s decision on the winner of the 2012 election, before the court announced its ruling.

Timely statements by other leading voices, likewise, had a stabilizing effect. A few days before the election, Mohamed Ibn Chambas, the United Nations Special Representative of the Secretary General for the UN Office in West Africa, which had played an instrumental role in the pre-electoral process, and the Liberian president, Ellen Johnson Sirleaf, who served as chair of the Economic Community of West African states, called on the candidates to maintain peace. The August 2016 Accra Peace Accord—signed by all seven presidential candidates in the presence of Chambas, Sirleaf, and former South African President Thabo Mbeki—reinforced the entreaties to maintain peaceful elections. Former UN Secretary General Kofi Annan delivered a statement advising the political parties to allow the EC do to its work and praising those that had already conceded. Ban Ki Moon, the UN Secretary General at the time, also urged calm and patience as the counting proceeded.

All elections will have crises, moments of confusion, and points of contention. The key for a peaceful resolution lies in different stakeholders managing these events in an open, quick, and inclusive manner.

Ghana’s experience showed that communication also matters. The EC established its first communication department, and throughout the counting process, the electoral commissioner’s director of communications was on hand to respond to developing events. The ready accessibility to the EC decreased the potential for rumors to develop and spread. All elections will have crises, moments of confusion, and points of contention. The key for a peaceful resolution lies in different stakeholders managing these events in an open, quick, and inclusive manner.

Ghana’s peaceful political transition holds lessons for other African states. It highlights four important conditions. First, the electoral management body must take concrete, visible steps to address perceptions or proven allegations of political bias. Second, electoral data must be accessible to the wide variety of relevant stakeholders. Third, the electoral management body should maintain an open line of communication with traditional and social media outlets. Finally, political leaders must choose words and actions that keep tense political environments from escalating. Together, these practices will bolster the credibility of the electoral process, enabling the candidates and general public to accept the results.