China’s expanding involvement in Africa is an integral piece in President Xi Jinping’s grand strategy to restore the country to its perceived rightful place of global prominence.

Chinese President Xi Jinping speaks at the Forum on China–Africa Cooperation in 2015. Established in 2000, the FOCAC summit meets every 3 years. In between summits, a follow-up committee of Chinese and African institutions implements and monitors a wide range of programs. (Photo: GCIS.)

Chinese President Xi Jinping’s visit to the United States generated inevitable comparisons of the two countries’ approaches to engaging the world. China’s expanding involvement in Africa provides a revealing window into Beijing’s grand strategy. Africa is an integral element of Xi’s “China Dream”—a blueprint for restoring the country to its perceived rightful place of global prominence. Part of the blueprint entails positioning China as a leader in the developing world through expanded bilateral and multilateral engagements. China advances these aims in Africa in five primary ways:

China’s economic involvement with the continent has steadily expanded over the past decade. Beijing operates approximately 2,500 development, civil works, and construction projects worth $94 billion in 51 African countries. While it is not clear how many of these have reached completion beyond ceremonial pledges, the visible presence of huge infrastructure projects across the continent is unmistakable. In 2009, China surpassed the United States as Africa’s largest trading partner, and by 2015, China’s trade with Africa had reached $300 billion. Crude oil, raw materials, and natural resources constitute more than 80 percent of its roughly $93 billion in annual imports from Africa. Observers have also criticized the transactional nature of some of China’s engagements, where China seems primarily interested in accessing and exploiting Africa’s vast natural resources.

China in 2015 was the second largest supplier of weapons to sub-Saharan Africa after Russia, accounting for 22 percent of arms transfers to the region.

For years, China’s leaders dismissed external military deployments as “a characteristic of Western imperialism.” China, they said, “does not interfere everywhere like the hegemonists do.” But in 2008, the Chinese Navy made its first operational deployment outside the Asia-Pacific region to the Gulf of Aden to support the UN–sanctioned anti-piracy task force. Then Beijing deployed a warship supported by ground and air assets to evacuate 35,000 Chinese nationals from mounting violence in Libya in March 2011. In 2016, the People’s Liberation Army (PLA) installed troops, assets, and support staff in Djibouti, its first permanent overseas deployment since 1949. And in April, the first aircraft carrier built in China entered service. All of these moves are in line with the “New Historic Missions” doctrine, which calls for an expeditionary capability that can, among other things, safeguard growing Chinese interests on the continent, maintain a naval presence in the western Indian Ocean, protect its merchant ships from piracy, and support China’s growing participation in UN missions in Africa.

In 2015, China passed a counterterrorism law that for the first time authorizes the PLA’s deployment on overseas counterterrorism missions. The PLA has also established itself as an active security partner through military-to-military contacts based on training and education programs, military advisors, arms sales, and construction of military facilities and ministries of defense headquarters. China in 2015 was the second largest supplier of weapons to sub-Saharan Africa after Russia, accounting for 22 percent of arms transfers to the region.

China is now the second largest financial contributor to UN peacekeeping and commits more troops to missions than all other members of the Security Council combined. With these contributions has come a greater say at the UN. 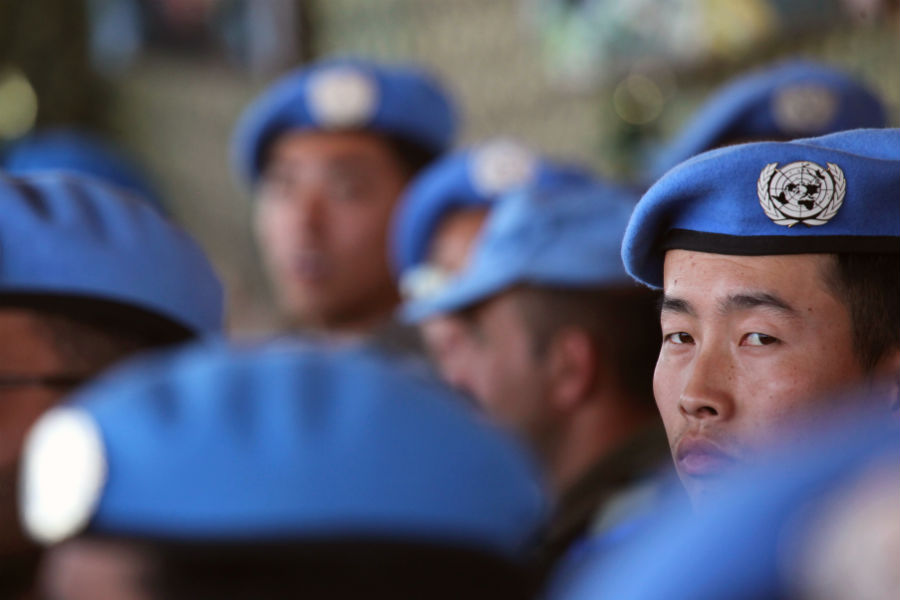 Initially, Chinese troop deployments in Africa were strictly non-combat, such as medical specialists and engineers, and to low risk areas. Since 2012, however, the PLA has been sending combat troops to high risk theaters, with an infantry company in northern Mali and an infantry battalion to South Sudan. Currently, about 2,500 Chinese troops and police officers are deployed in UN missions across the continent, with the largest deployments in South Sudan (1,051), Liberia (670), and Mali (402). In 2015, China pledged 8,000 additional troops toward a Chinese Peacekeeping Standby Force that will be placed at the service of UN peacekeeping operations. Beijing also committed itself to the UN’s new peacekeeping capability readiness system and allocated $1 billion over 10 years to a UN peace and development fund. China also allocated $100 million in new funding to the African Union’s rapid deployment capability.

China is now the second largest financial contributor to UN peacekeeping and commits more troops to missions than all other members of the Security Council combined. With these contributions has come a greater say at the UN, such as the Department of Peacekeeping Operations. China is particularly sensitive about how its expanded military presence is perceived. During his 2015 UN address, president Xi asserted that “China will never pursue hegemony, expansion, or sphere of influence.” Managing this perception is essential for realizing the greater influence envisioned in the China Dream, given deepening tensions with China’s immediate neighbors.

Political party training is another element of China’s Africa policy. Managed by the Central Party School, the programs consist of lectures in ideology and party building, exposure to Chinese culture, field visits and mentorship of African political leaders, and deployment of Chinese party officials to the continent as political advisors. These programs date back to the 1960s in support of African anti-colonial movements, but they have now been extended to include political parties that do not have a background in liberation movements. They are also highly technical, including hands-on training on how to establish organizational structures, ideological work, propaganda systems, and party administration. According to the Chinese Communist Party, the goal of these programs is to “educate fraternal African political parties on China’s experience in economic development and political governance.”  This has led some to criticise the training for reinforcing authoritarian models that might exacerbate instability on the continent.

The Chinese model stresses the subordination of the military and government to party control—a dynamic that makes the security sector vulnerable to politicization at the expense of professionalism.

While numbers are not easy to come by, available data suggests that these programs have expanded in scope. The ruling parties of Angola, Ethiopia, Mozambique, Namibia, South Africa, South Sudan, Sudan, Uganda, and Zimbabwe are all major training partners of the Central Party School. South Africa’s African National Congress alone sent four groups of 56 members of its top organs for training between 2008 and 2012. Recently the training was expanded to include “next generation leaders” through the Sino-Africa Young Political Leaders Program. More than 200 Africans graduated from the program between 2011 and 2015, and Beijing has said that it would increase this intake to 1,000 by 2018.

While many ruling elites are enthusiastic about these programs, some African observers see problems in their wholesale application to the African context. The Chinese model, for instance, stresses the subordination of the military and government to party control—a dynamic that makes the security sector vulnerable to politicization at the expense of professionalism. This is particularly problematic in Africa given the persistence of personality-based political parties and governing styles. As many have suggested, the “party army” approach can be an especially harmful model in divided societies, where the security sectors are designed to serve individual political leaders as opposed to the nation.

In 1993, “soft power with Chinese characteristics” became a core policy concept to support the goal of restoring China’s global prominence. It amplifies non-coercive tools—diplomacy, party-to-party building, strategic communications, and preferential access to the Chinese market—as tools of strategic influence, educational, scientific, and cultural exchanges. China’s effort to portray its rise as “peaceful” allows it to explore strategically focused relations without relying on military power, an approach that enhances Beijing’s global stature. Funding the construction of the $200 million AU headquarters as a “gift to Africa from China” is one practical example of how Chinese soft power is employed in support of strategic objectives. The architect of this concept, Wang Huning, has advised all Chinese leaders since Jiang Zemin, and he has been tapped to join the Politburo Standing Committee, China’s highest leadership organ.

China’s engagement with Africa is a critical element in an evolving global strategy that has at its core the “great rejuvenation of the Chinese nation.” This is part of a foreign policy that is highly competitive with other countries and that seeks to be adept at exploiting opportunities.