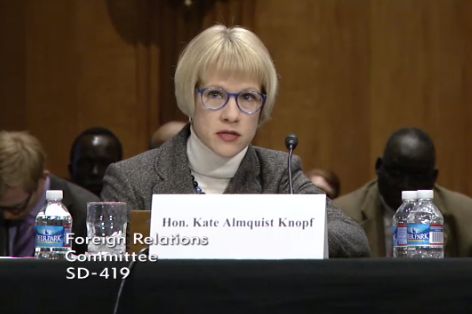 On January 9, 2014, Kate Almquist Knopf, Former USAID Assistant Administrator for Africa and adjunct professor at the Africa Center for Strategic Studies, testified before the U.S. Senate Committee on Foreign Relations on the volatile situation in South Sudan.

In her testimony, Professor Almquist Knopf—who recently authored an ACSS research paper on South Sudan—assessed the current crisis and offered several recommendations both for short- and long-term gains.

According to Professor Almquist Knopf, “the current crisis [was] neither inevitable, nor unstoppable. It is political and ultimately a failure or South Sudanese leadership.”

While the unique conditions in which the country became independent called for creative thinking and bold steps following the end of decades of war with northern Sudan, Professor Almquist Knopf said the political leadership in South Sudan is yet to show that capability. The government of South Sudan is still undergoing an arduous transition from liberation movement to civilian government, and she warned the audience not to rush to judgment because “institutional development takes decades, and political transitions are inherently messy.”

In her written testimony, Professor Almquist Knopf said the United States can play a crucial role because of its great influence in the country. Her recommendations to Congress include:

Finally, Professor Almquist Knopf called for institutional transformation in South Sudan once the crisis has settled. For this to happen, she urged the government of South Sudan to:

“Going forward, South Sudan’s leadership can set a new course toward legitimacy, stability, and sustained development if it prioritizes above all else building trust, accountability, and social cohesion with and across the South Sudanese citizenry” she said. “There is no more essential state building task than this.”