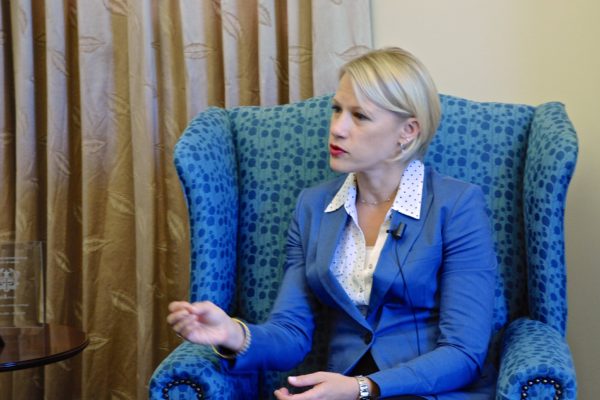 Kate Almquist Knopf is an independent consultant on African issues and global development policy. Previously she served as Assistant Administrator for Africa and Mission Director for Sudan and South Sudan in the U.S. Agency for International Development (USAID). Ms. Knopf represented the U.S. Government to the international Assessment and Evaluation Commission charged with overseeing implementation of the Comprehensive Peace Agreement between Sudan and South Sudan. She is an adjunct faculty member of the Africa Center for Strategic Studies.

In this edition of Ask the Expert, Ms. Knopf provides an overview of South Sudan’s struggle to establish a government that enjoys popular legitimacy and is accountable to its citizens. Ms. Knopf—who recently published an Africa Center Research Paper about fragility and state-society relations in South Sudan—also talks about prospects for durable peace and sustained development in the newest nation of the world.

1. What are the key concerns you raise in your report?

The key concern in this report is how to establish a solid foundation for the new state of South Sudan so that violence can end and peace and development can take root. The core issue is improving state-society relations and social cohesion so that institutions of accountability can emerge. Strengthening social cohesion through confidence-building measures that improve state-society relations must be a first-order priority. It is the foundation on which all state institutions must be built. Without greater trust between the new government and its citizens, efforts to meet South Sudan’s current political, security, economic, and social crises will fail.

2. Your report mentions steps that South Sudan must take to demonstrate its legitimacy as a state. Given the events of the past two years, how realistic are those steps?

South Sudan has several opportunities in the next two years to reverse some of the negative actions that have undermined citizen confidence in the state since independence, for instance abuses by security services and attacks on journalists and human rights advocates. The national constitutional review process, national reconciliation process, and forthcoming elections in 2015 all provide opportunities for the government to build more inclusive coalitions to support the necessary reforms the state must make, to expand space for independent voices, and to tangibly demonstrate the state’s responsiveness to citizen expectations. Capitalizing on these opportunities to achieve these results will require South Sudan’s leadership to treat them as critical to the long-term state-building endeavor rather than short-term opportunities for political gamesmanship. In other words, the government must cease actions that alienate society from the state and it must proactively engage all citizens in a national dialogue on the nature of the state. On the practical front, it will also require a singular focus on extending roads and radio coverage to all parts of South Sudan as quickly as possible so that all citizens have regular access to the free flow of information and people, goods, and services can move freely.

3. You also mention a survey in May 2013 that found that half the population of South Sudan said their government was “headed in a wrong direction.” Is that a surprise only two years after the country’s independence? What does it reflect?

I don’t think it’s a surprise. At independence, expectations were understandably high amongst South Sudanese desiring quick improvements in security, governance, and development. While some gains have been made since the peace agreement was signed in 2005—primary school enrollment has more than doubled and infant and child mortality rates have declined—the needs are enormous and will take time to address. It’s important to recognize that South Sudan became an independent state in 2011 with virtually no physical infrastructure and very limited experience of effective governance on which to draw. Managing expectations is a key challenge for the government, but the depth of frustration amongst South Sudanese at the slow rate of progress is also a reflection of growing dissatisfaction over corruption and perceptions of government disinterest in meeting citizens’ needs.

4. Your report mentions that “ethnic fault lines abound in South Sudan.” How do these tensions—along with government’s accountability—affect the state’s authority and credibility?

South Sudan became independent with a long history of intercommunal violence and ongoing ethnic tensions. Ethnic conflict has continued in some parts of South Sudan since independence, causing serious humanitarian distress and loss of life. The government’s efforts to manage these ethnic tensions and end intracommunal violence, for instance through poorly implemented civilian disarmament campaigns and several brutal counterinsurgency campaigns, have mostly failed thus far. Rather, its efforts have exacerbated perceptions of marginalization and discrimination and further alienated some ethnic groups from the state.

5. There are general elections scheduled in South Sudan in 2015. What leadership shifts are likely to emerge from these elections?

A key question at this moment in time is whether elections will even take place in 2015. The transitional constitution does not require elections to be held then, even though the terms of the current elected officeholders, from president on down, will end in July 2015. The election timetable has been thrown into question by the ruling SPLM party’s current leadership struggle to determine its next chairman and candidate for president. There are five serious contenders, including the incumbent, Salva Kiir, and no apparent process to resolve the competition. It is unlikely that preparations for elections will proceed until the SPLM is ready for them to do so, raising serious concerns that the party may seek to postpone the elections. This would seriously damage the young state’s credibility at home and abroad.