Protestors march in Durban, South Africa as a show of support for the Ukrainian people, protesting against Russia’s invasion of Ukraine, and calling for the South African government to condemn the action of the Russian president Vladimir Putin. (Image: Rajesh Jantilal / AFP)

Russian president Vladimir Putin has made it apparent for the past several years that he is ready to move on from the democratically based international order that has shaped global governance norms since the end of World War II. These norms are clearly enshrined in the United Nations Charter and the Universal Declaration of Human Rights—respect for the sovereignty and the territorial integrity of other states, peaceful resolution of disputes, and the rights of citizens to participate in political life. Inherent in the Charter, signed by 193 member states, is a collective responsibility to hold members accountable when these principles are violated in accordance with international law.

Russia’s invasion of and attempt to annex all or parts of Ukraine, therefore, has always been more than just a bilateral dispute—but an explicit effort to redefine international norms.

Kenya’s Ambassador to the United Nations, Martin Kimani, recognized the stakes from the outset by declaring at the United Nations Security Council during the launch of the Russian invasion of Ukraine that the viability of multilateralism itself was under attack.

“Kenya’s Ambassador to the United Nations, Martin Kimani, recognized the stakes of Russia’s invasion by declaring that the viability of multilateralism itself was under attack.”

So, what does a Russian driven international order look like?

Global actors shape international norms by exporting their domestic governance model. In Russia’s case, Russia analysts often characterize this as an authoritarian, kleptocratic system. Power is monopolized, elections are tightly controlled to perpetuate a president for life, and opposition voices are imprisoned (like Alexei Navalny), poisoned (like Sergei Magnitsky), or assassinated (like Boris Nemtsov). Independent media is restricted and, if too critical, suffocated. Protesters are not tolerated. Russian state contracts and the country’s vast natural resource wealth are controlled by an oligarchic network close to Putin, resulting in economic stagnation and structural inequality.

In effect, this is a transactional system where laws are arbitrarily applied to serve the interests of those in power. Human rights and democracy are inconveniences to be ignored.

It is from such a premise of unencumbered governance that Putin could claim in the runup to the invasion that Ukraine never really existed as an independent state and therefore there was no sovereignty to be violated.

Putin’s view of international order has dangerous implications for Africa. Imagine a larger African state asserting that its smaller neighbor never really existed as an independent sovereign entity. Applying this logic would not only be highly destabilizing but would undermine one of Africa’s major underappreciated accomplishments—respecting international borders, even if capriciously drawn by external actors, and mostly avoiding interstate conflict.

Indications of what the Putin international order portends for Africa can be seen as Russia exports its governance norms onto the continent. In Libya, the Central African Republic (CAR), and Mali—the African countries where Russia has become most entrenched—a troubling pattern of undermining the United Nations, deploying unaccountable mercenaries, and violating human rights has become normalized. These destabilizing actions are invariably taken in support of Russia’s proxy in the target country who is propped up by Russian disinformation campaigns and election interference.

In Libya, Russia has deployed substantial military resources—including fighter jets, surface-to-air missiles, and mercenaries—in the attempt to install warlord Khalifa Haftar as a new strongman. Throughout this campaign, ongoing since 2019, Russia has actively undermined the UN-recognized government in Tripoli. So far unable to accomplish its objectives by force, Russia is attempting to derail the UN process for establishing a constitutional basis for a unified government and holding elections, by backing a parallel government in the east. 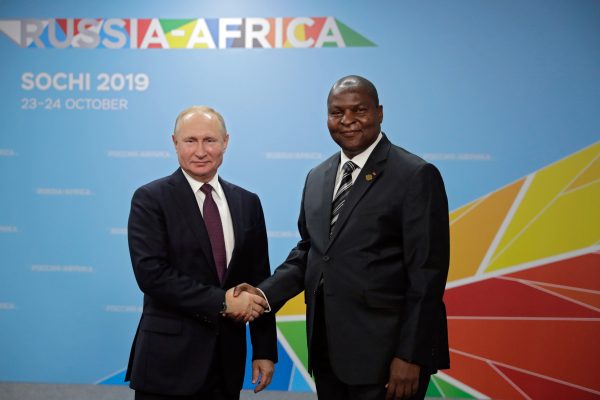 In CAR, a Russian is the national security advisor and mercenaries from the shadowy Wagner Group serve as the presidential guard of President Faustine-Archange Touadéra. Russia was also blatantly involved in orchestrating Touadéra’s reelection in 2020. As Wagner has become imbedded in CAR (especially around gold and diamond mines), the mercenaries have taken an increasingly aggressive posture against the 15,700-strong UN peacekeeping force deployed to help stabilize CAR.

In Mali, Russian disinformation campaigns starting in 2019 have disparaged the UN, France, and the democratically elected president, Ibrahim Boubacar Keïta. Russia swiftly became the prime backer of the military coup that followed in August 2020. As in the other contexts, the deployment of Wagner mercenaries has been accompanied by grisly accounts of human rights abuses. Tellingly, Russia has used its veto power at the UN Security Council to block independent investigations of these abuses. Opposition leaders have been arrested for questioning the legitimacy of the junta and have been threatened by regime sponsored youth militias.

In short, we have a fairly good idea of what a Russian-shaped international order would look like in Africa—and it is not appealing for citizens as their voice is being systematically silenced.  Ukraine is not an aberration but part of a pattern of Russia undermining the rule of law to advance its interests.

While uninviting for African citizens, the Russian model is attractive to certain African leaders who benefit politically and financially from Russia’s backing. Unsurprisingly, those most receptive to Russian influence tend to exhibit their own versions of Russia’s authoritarian, transactional governance template. In addition to those mentioned above, leaders in Sudan, Madagascar, Zimbabwe, Republic of Congo, South Sudan, Eritrea, Uganda, and Burundi fall in this category.

The dubious legitimacy of these leaders and the extralegal tools Russia typically employs to gain influence and keep these regimes in place—mercenaries, disinformation, intimidation, and election interference—are inherently destabilizing.

The application of Russia’s international order in Africa, thus, serves the elite actors who enter such opaque arrangements, to the detriment of the general population. It is important to keep in mind, accordingly, that the former do not speak for the latter. The inevitable trajectory of this order is of growing disparities in access to resources and political voice.

“The application of Russia’s international order in Africa serves the elite actors to the detriment of the general population.”

There is much at stake for Africa, then. Starkly different actors—authoritarians unfettered by the rule of law versus citizens seeking to safeguard their civil liberties—will benefit depending on the international order that endures.

African supporters of these differing visions are not aligned on East-West ideological allegiances as was the case during the Cold War. Instead, they are defined by their level of commitment to the governance principles put forward in the UN Charter.

While the current UN-based international order is far from perfect, it provides a legal, collective basis for African citizen voices to be heard, human rights protected, and governments held accountable. The alternative is that every country—and every individual—is on their own.

This article originally appeared as part of the ISPI Dossier “Side Effects: Ukraine’s Perfect Storm Looming over Africa.”

More on:    Russia in Africa    Democracy