Long a bedrock of stability, Malawi’s 2019 presidential election continues to be hotly contested. On February 3, 2020, Malawi’s Constitutional Court overturned the results of the May 2019 election, deeming the process to have been riddled with irregularities. The Court’s historic action, later validated by the country’s Supreme Court, represents a noteworthy illustration of the independence of the judiciary in Malawi’s maturing democracy.

Moving forward with a re-run, as the Constitutional Court ordered, has been far from straightforward, however. Rather than implementing the ruling, President Peter Mutharika has refused to ratify the electoral reforms passed by Parliament and directed by the Court. He has, furthermore, kept Parliament out of session, limited political space, and attempted to politicize the military. Resolution of the crisis affects not just a path to determining the electoral outcome, but also represents a challenge to upholding executive oversight in Malawi. 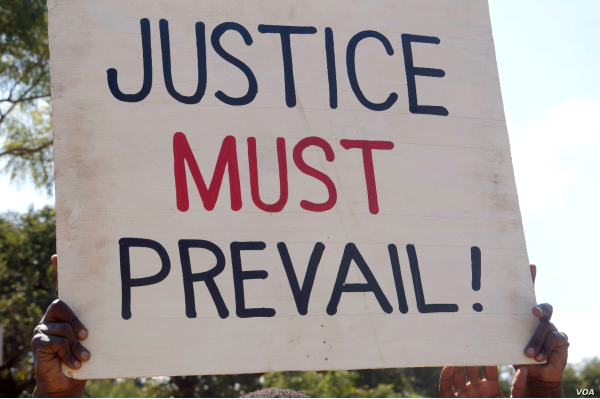 A placard held by a protester during a post-election demonstration in Lilongwe. (Photo: VOA)

The crisis is also a test for Malawi’s democratization process. Malawi has four major parties that are competitive at the national level. Therefore, national elections have historically been closely contested affairs—with only one presidential candidate in Malawi’s history having won an absolute majority. The perceived lack of legitimacy stemming from the plurality system has led to previous calls for the adoption of a 50 percent +1 majority system. Nonetheless, previous electoral results and court rulings have been marked by respect for the rule of law, and the country realized its first successful transfer of power between rival parties in 2014.

Mutharika’s resistance to the Constitutional Court ruling has taken the country into uncharted territory. In addition to threatening the rule of law, the crisis risks Malawi’s long-cherished domestic stability. A petrol bomb thrown into the opposition United Transformation Movement (UTM) party headquarters on May 5, 2020, killed three innocent people. While largely peaceful, ongoing protests since the announcement of the 2019 election have, on occasion, turned violent with stores being looted and cars set on fire. Police have arrested over 200 people in connection with these crimes. Police have also been accused of sexually assaulting 17 women while cracking down on post-election protests.

In May 2019, Malawians headed to the polls to choose their president in a race that was illustrative of the country’s competitive multiparty process. Seven candidates ran in a “first-past-the post,” single round electoral system. Malawi’s Electoral Commission (MEC) declared incumbent President Mutharika the winner with 38.6 percent of the vote. Close behind, opposition candidate Lazarus Chakwera of the Malawi Congress Party (MCP) garnered 35.4 percent, followed by Saulos Chilima, Mutharika’s Vice President and leader of the UTM with 20.2 percent. 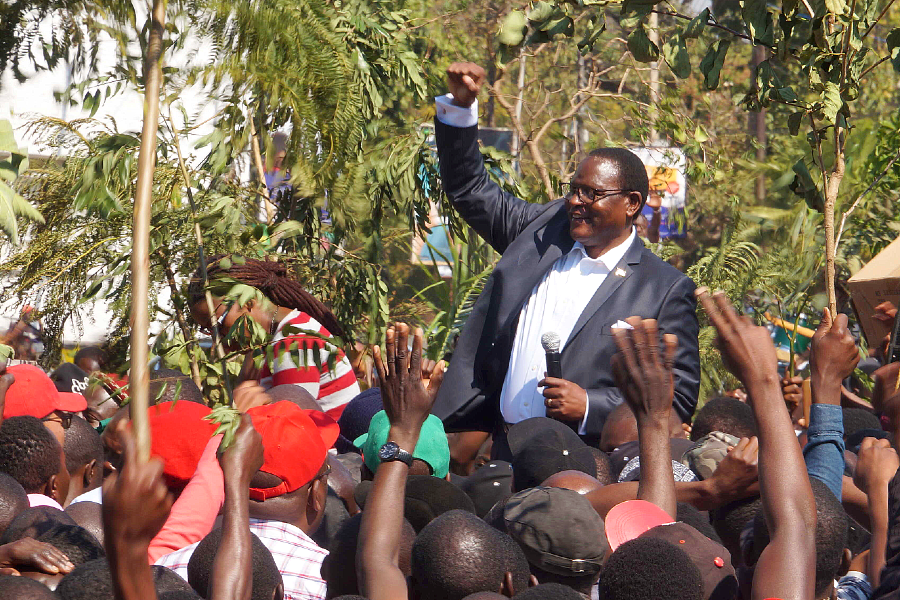 Days after the election results were announced, the two leading opposition candidates, Chakwera and Chilima, filed petitions to the Constitutional Court challenging Mutharika’s victory. The two cited widespread irregularities, including duplicate forms and the use of Tippex correction fluid and missing signatures on some result sheets.

On February 3, 2020, after nine months of review, the Constitutional Court ruled in favor of Chakwera and Chilima, annulling the 2019 election. The Court called for fresh elections within 150 days. Moreover, the Court determined that the term “majority” in Section 80 of the Constitution should be interpreted as a 50 percent +1 majority electoral system. The Court also directed the National Assembly’s Public Appointments Committee (PAC) to assess the competence of the MEC commissioners who oversaw the flawed 2019 elections. With this historic ruling, Malawi became the second country in Africa, after Kenya in 2017, to see an election victory overturned in the courts.

Under the guidance of opposition Speaker of the National Assembly, Catherine Gotani Hara, Parliament swiftly passed all of the Constitutional Court-ordered electoral reform bills. After some back and forth, a fresh election date was set for June 23, 2020. Importantly, this involved amending the Parliamentary and Presidential Elections Act, now requiring the winner to achieve 50 percent +1 of the vote. In addition, the PAC found the MEC commissioners liable for the election’s flaws and recommended they be replaced.

Rejecting the Constitutional Court’s ruling, on March 9, Mutharika and the MEC filed an appeal to the Supreme Court. Mutharika’s lawyer conceded that electoral laws were disregarded during the 2019 polls, but argued that “there was no evidence to state that votes were taken from one candidate and given to another.” 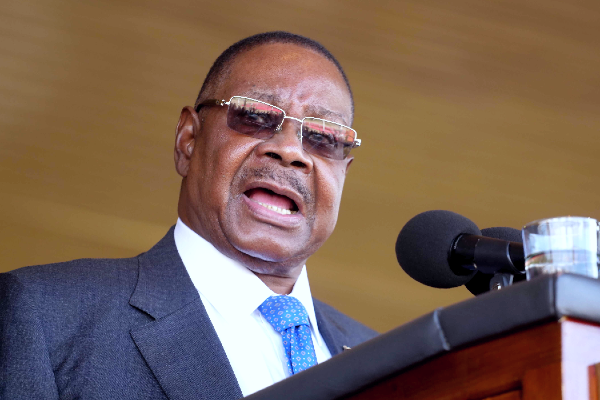 Mutharika simultaneously refused to assent to Parliament’s electoral reform bills and rejected the recommendation to fire the MEC commissioners. Malawi’s Constitution allows the president to refuse assent only once, but it gave Mutharika enough time to stall until Parliament is back in session, which is now scheduled for June 5. He has, moreover, declared the Court’s ruling and Parliament’s passage of legislation as unconstitutional.

Meanwhile, in the wake of the coronavirus outbreak, Mutharika declared a “State of Disaster,” banning gatherings of more than 100 people. While justifiable on public health grounds, the move stacks the deck against the political opposition by limiting their ability to campaign. It is notable, too, that by declaring a State of Disaster rather than a State of Emergency, as most countries have done, Mutharika was able to avoid  reconvening Parliament (specifically the Defense and Security Committee) to approve it.

Mutharika subsequently dismissed the Defense Force Commander, General Vincent Nundwe, along with his deputy, replacing him with Major General Andrew Lapken Namathanga. Nundwe’s forces had been protecting demonstrators protesting against the fraudulent elections, consistently resisting calls by the ruling party to end the protests by force. Mutharika may hope that by replacing Nundwe (a northerner) with Namathanga (a southerner and a Lhomwe—from the same region and ethnic group as the President), he would have more control over the Malawi Defense Forces (MDF). However, the  values of professionalism and impartiality within the MDF are held in higher regard than support for any particular individual in power. So, Mutharika’s fourth Defense Force Commander since coming into office is not likely to be any more politically pliant than the others.

Malawi’s democratic institutions continue their attempts to uphold constitutional checks and balances. National Assembly Speaker Gotani Hara has asked the Constitutional Court for further guidance regarding Mutharika’s refusal to approve electoral reform bills stating, “The National Assembly will continue to abide by any court rulings as one way of ensuring that there is respect for separation of powers and rule of law.” Continued opposition and civil society pressure has also resulted in a commitment from Mutharika to appoint new electoral commissioners by June 5. 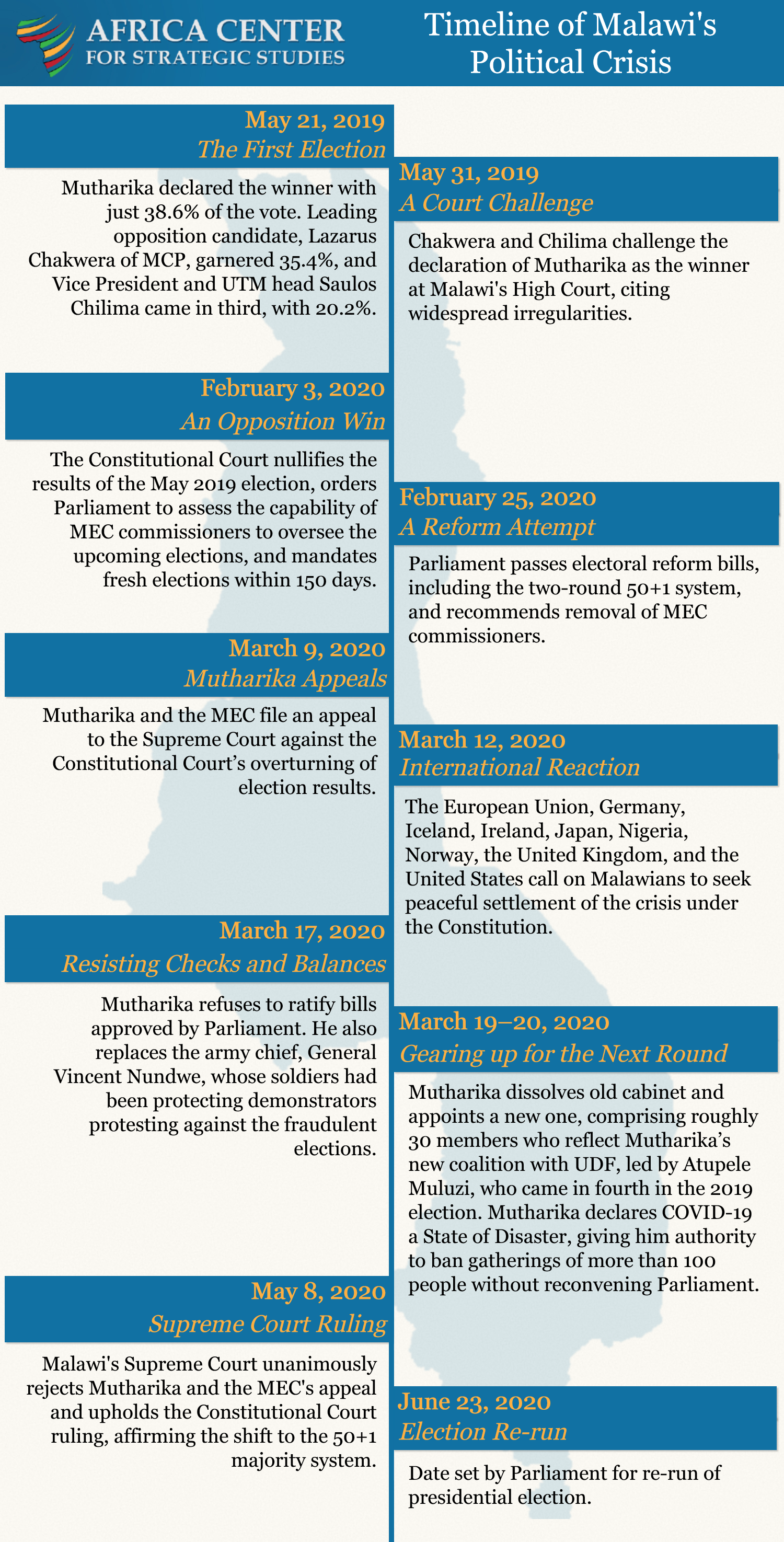 On May 8, in another example of Malawi’s judicial independence, the Supreme Court rejected Mutharika and the MEC’s appeal and unanimously upheld the Constitutional Court’s ruling, including the shift to the 50 percent +1 majority system. The Supreme Court also agreed with the assessment of both the Constitutional Court and the Parliament’s PAC regarding the MEC’s incompetence. The panel of seven Supreme Court judges cited the grounds for the appeal as being fictitious and embarrassing and chastised the Attorney General for representing the MEC.

Meanwhile, Chakwera and Chilima have formed an alliance between their respective parties, MCP and UTM, and seven other small parties, called the Tonse (or “All of Us” in Swahili) Alliance. Together, the two main opposition parties won 55 percent of the vote in 2019 and pose a formidable challenge to Mutharika under the 50 percent +1 majority system.

Malawian civil society has proven adept at organizing resistance to Mutharika’s actions, calling the months since last year’s election “the year of mass protests.” The main force behind the demonstrations, the Human Rights Defenders Coalition (HRDC), has combined consistent public protests with social media messaging. Even since the ban on protests under the State of Disaster, the HRDC has continued to pressure Mutharika to abide by the Constitutional Court’s decision and sign the electoral reform bills passed by Parliament. The HRDC has also asked the African Union (AU) to intervene, citing the principles in the AU’s Charter on Democracy, Elections, and Governance.

The Southern African Development Community’s (SADC) Organ on Politics, Defence, and Security Cooperation is the primary institutional mechanism for promoting and maintaining peace and stability in the region. After the Constitutional Court’s historic ruling in February, it commended the “Court for upholding Malawi’s Constitution and the electoral law in the conduct of the petition.”

Meanwhile, ambassadors from the European Union, Germany, Ireland, Japan, Nigeria, Norway, Tanzania, the United Kingdom, and the United States issued a joint letter calling on “Malawians to deeply reflect on the principles of national policy under the Constitution of Malawi, especially principle 13 (L), which calls for peaceful settlement of disputes through negotiation, good offices, mediation, conciliation and arbitration.” A followup statement by the European Union together with Norway, the United Kingdom, and the United States called for “the end of political violence in Malawi and for unity and justice to prevail.”

There is strong domestic opposition to what many Malawians see as an attempt to subvert the democratic process. A February 2020 Afrobarometer survey found that as of late 2019, “8 out of 10 Malawians (79 percent) were aware of the court case challenging the validity of the 2019 presidential election results, and among these citizens, 68 percent believed the opposition parties were justified in filing the case. Large majorities (two-thirds) saw the courts as impartial and trustworthy, and most (76 percent) said “the president must always obey the laws and courts, even if he thinks they are wrong.” 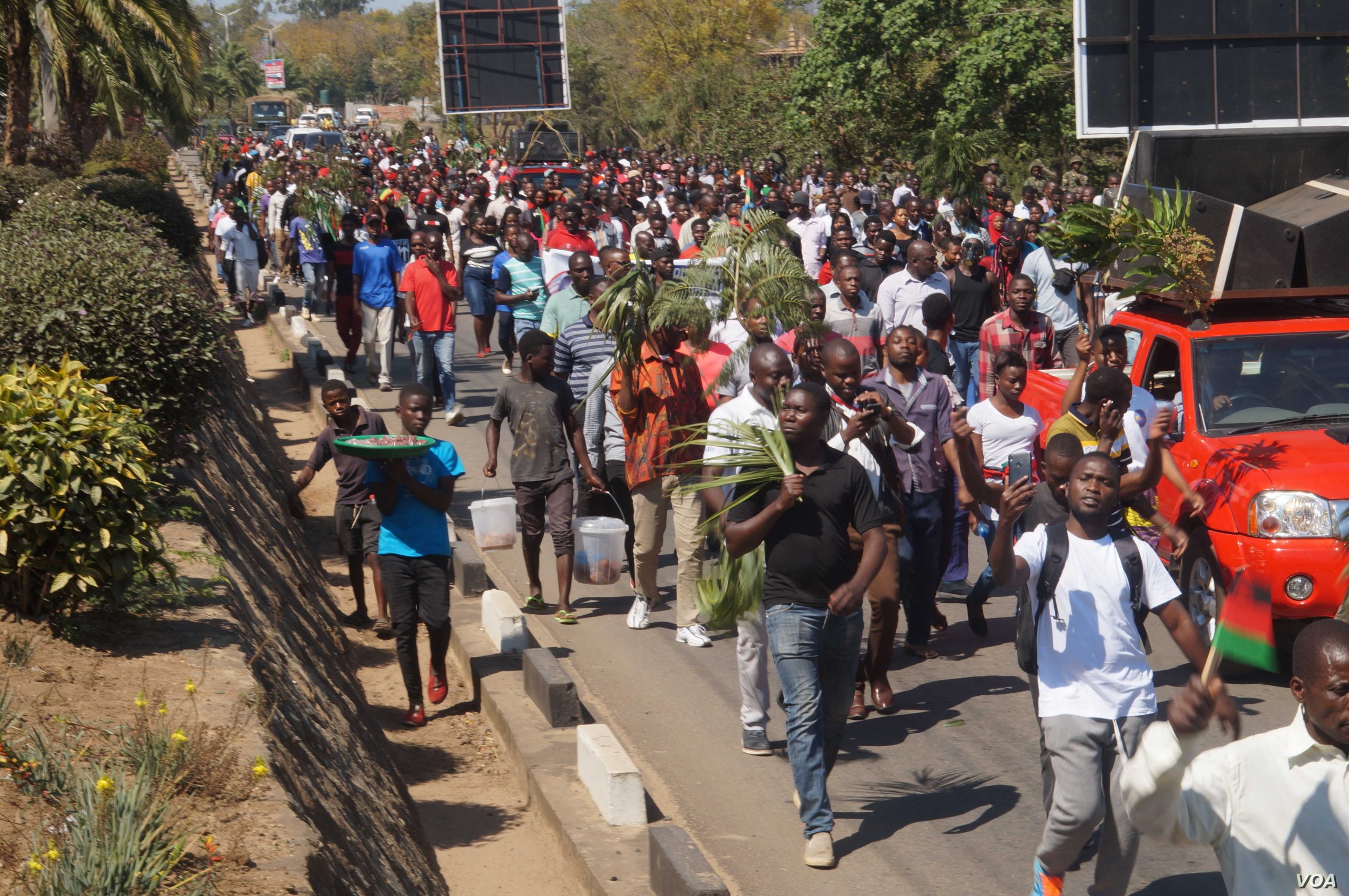 Malawi’s Constitutional Court and Supreme Court have demonstrated their independence, as well as the growing maturity of Malawi’s democratic institutions, by ruling in support of a credible electoral process. These rulings must now be enforced if the rule of the law in Malawi is to be maintained. This will require ongoing pressure from Malawian civil society groups to hold responsible leaders accountable. These efforts can be significantly assisted by regional and international actors upholding democratic and constitutional norms.

The political crisis in Malawi is also a test for Malawi’s security sector. The crisis has been a difficult time for the MDF, which in addition to its leadership turnover, has been called upon to provide domestic security, which is not their mandate. They have been compelled to do so, however, since the police are widely distrusted by the public, have often reacted poorly during demonstrations, and are considered biased toward the ruling party. For example, there have been no arrests for the petrol bombing of the UTM offices in Lilongwe.

An independent security sector is paramount to military professionalism, Malawi’s democratic institution-building, and a key contributor to stability. Efforts need to be made to insulate the security sector from politicization and to continue to reward merit-based security actors who support upholding the rule of law. Mutharika’s attempt to use of the security sector as a tool for his political objectives, therefore, poses a serious concern for Malawian citizens.

“The legitimacy of elected leaders hinges on credible democratic processes.”

The legitimacy of elected leaders hinges on credible democratic processes. This is true regardless of which candidate wins and is particularly important in Malawi, where elections are often highly competitive. Leaders who gain a popular endorsement through a credible process are in a much stronger position to mobilize the public toward societal priorities and govern effectively. Along these lines, Mutharika is still in a position to win in a free and fair electoral process. A political alliance between the ruling DPP and the United Democratic Front (UDF) provides a viable path to victory while still upholding the rule of law. If, however, Mutharika retains power in a manner deemed to be extralegal, he will face ongoing questions of his legitimacy, which will inhibit his ability to govern.

Malawi’s democratic institutions—the judiciary, Parliament, and military—have proved resilient in the face of a determined effort to weaken checks and balances on the executive. The outcome from this test will shape Malawi’s democracy, and prospects for stability, for years to come.