Justice and Rule of Law Key to African Security

The integration of justice initiatives within conventional security efforts can mitigate conflict, improve societal resilience, and build a stronger culture supportive of the rule of law.

As violent extremist groups have gained a foothold in parts of the Sahel in recent years, one of their strategies has been to exploit  communities’ grievances over access to justice. It’s a potent message. Human rights abuses by security sector actors and perceptions of unjust treatment by government officials are key determinants of individuals’ decisions to join violent extremist groups in the Sahel, the Lake Chad Basin, and the Horn of Africa.

Parts of Africa have also seen a rise in farmer-herder violence in recent years. Spurred by growing population and land pressures in the context of climate change, these disputes arise from competing claims over access to land.

In the coming decades, over 80 percent of Africa’s population growth is expected to take place in cities. This has contributed to the rapid expansion of informal settlements in many of Africa’s urban areas. The growing share of African urban dwellers living in these informal settlements underscores the urgency of protecting the civil liberties and property rights of these citizens. This includes guarding against heavy-handed—and at times exploitative—approaches taken by police to counter crime and violence. The #EndSARS protests in Nigeria were fundamentally about requiring police to abide by the rule of law.

“The increased activism by Africa’s growing youth movement is largely focused on matters of justice.”

The increased activism by Africa’s growing youth movement is largely focused on matters of justice, such as mediating conflicts in their communities, challenging presidents who defy term limits, and promoting civic engagement.

These examples highlight the indispensable, though often overlooked, role that justice institutions play in advancing African security. The failure to enforce the law not only contributes to insecurity but also opens the door to other forms of systemic criminality, often with the complicity of government actors.

The ENACT Organized Crime Index finds that high-level government actors, in collusion with criminal networks, are some of the most prominent facilitators of organized crime, which is easier to perpetrate when there are fewer guardrails against corruption in government. When the law is not applied evenly, and institutions of transparency and accountability are weak, government officials colluding with criminal networks have little to fear.

The African Union’s Agenda 2063 lists justice, rule of law, and human rights as necessary pre-conditions for a peaceful and conflict-free continent. Nonetheless, African security sectors are not always set up to integrate justice and rule of law into their approaches. Not only does this limit the ability of security officials to mitigate threats, but it also affects the justice sector’s ability to take remedial action in a way that is seen as equitable. This, in turn, has implications for the popular legitimacy of the government.

In theory, most conceptions of the security sector already include justice sector institutions. The bigger challenges lie in practice. Namely, how can security actors use justice and rule of law to understand security problems in the first place? Likewise, how can they pursue solutions that encompass the many ways the rule of law shapes resilience?

To address transnational threats, some countries have established coordination bodies to harmonize strategy among security and justice officials. Sometimes, these institutions are special units that combine military officers, police, and gendarmes in their deployments to counter terrorism or transnational organized crime. Others convene judicial and investigative officials working on the same issues. In still other cases, there may be interagency committees focused on particular incidents or trends.

“Some countries have established coordination bodies to harmonize strategy among security and justice officials.”

One example of the latter comes from Niger, where the Ministry of Justice established a coordination committee on terrorism and transnational organized crime in 2018. The committee convenes investigators and judges working in special units, along with leaders in the armed forces, national guard, gendarmerie, and intelligence. At the time the committee was created, the military frequently engaged in counter violent extremism actions in Diffa and Liptako-Gourma without accompaniment by the gendarmerie prévôtale or military judicial police. The coordination committee sought to remedy this and reinforce procedures for security officials to adhere to human rights principles during arrest, detention, investigation, and transfer of terrorism suspects. These issues were a priority because they affected the abilities of prosecutors to bring viable cases against suspects. Better coordination alone cannot address rule of law concerns about the government’s response to violent extremism, but the genesis of the committee was a promising step in the direction of aligning security practices with fair trial standards. This, in turn, can help defuse the narrative of violent extremist organizations (VEOs) that governments fail to uphold the rule of law. 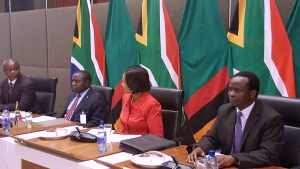 The foreign ministers of Zambia and South Africa at the inauguration of the Joint Commission for Cooperation for the two countries.
(Photo: Zambia High Commission)

The Economic Community of West African States, the Economic Community of Central African States, and the Gulf of Guinea Commission have taken steps to bolster the legal underpinnings of their inter-regional coordination on maritime safety and security. The Yaoundé Architecture of 2013 includes a Code of Conduct, a Declaration of the Heads of State, and a Memorandum of Understanding that established an Inter-Regional Coordination Center. Its strategic pillars—sharing information and harmonizing legislation and training—acknowledge the judicial foundations of international cooperation for maritime security. As activities in the Gulf of Guinea demonstrate, countering maritime crime is more feasible when there are legal foundations for practices like hot-pursuit.

The West African Network of Central Authorities and Prosecutors (WACAP), an initiative of the United Nations Office on Drugs and Crime, underscores how government responses to security issues hinge upon the work of judicial officials to facilitate cooperation. While mutual legal assistance and extradition can enable the investigation and prosecution of terrorism and transnational organized crime, such requests must go through official channels and follow processes that are often slow, onerous, and opaque. By training prosecutors and supporting the establishment of central authorities to manage international judicial cooperation, WACAP has nourished a network of judicial officials who trust one another and communicate outside formal strictures. Several WACAP members have used these informal ties to solve problems. Burkina Faso and Côte d’Ivoire had one such success in the wake of terrorist attacks in Ouagadougou and Grand Bassam in 2016. Informal exchanges between WACAP focal points and their interagency colleagues helped officials substantiate links between the two incidents and arrest a person with information about the attackers’ accomplices.

Justice and rule of law innovations are also vital to peace and stability at the community level. The foundation for this is the level of trust between security actors and local communities. Mistrust of security forces may exist as a result of legacies of security force abuses, perceptions of institutional corruption, and frustration with slow responses to crimes. Fostering popular confidence in the security sector thus hinges upon building rights-respecting relationships with citizens whom the government is meant to serve.

Several projects in the Sahel and East Africa have sought to infuse these aspects of rule of law into security forces’ community level work. In Saaba, Burkina Faso, citizens, local leaders, state security forces, and non-state security providers have held a series of Justice and Security Dialogues (JSDs). The dialogues convened diverse stakeholders, including women and youth, with different views to building community resilience to threats. Citizens who had experienced harsh treatment or felt caught in the middle of tensions between competing security actors could voice their concerns. Police and koglweogo self-defense groups had the opportunity to discuss how to fight crime with more complementarity. The JSDs are credited with improving relations between communities and security forces. Among other things, local police have become more willing to incorporate koglweogo into investigating crimes, as long as they brought suspects to the police instead of exacting vigilante justice.

Trust-building through dialogue has also been a feature of border security programs in the Mandera Triangle (Kenya-Somalia), Karamoja Cluster (Kenya-Uganda), and the Liptako-Gourma region of the Sahel. The dialogues occurred after extensive consultations about cross-border security with government and community stakeholders, as well as trainings for local security forces and civil society actors on conflict management, sensitivity, and mediation. Encompassing people within and across borders in the zones of interest, the dialogues sought to address security challenges like violent extremism, cattle rustling, the proliferation of small arms and light weapons, and trafficking. The programs exemplify the grassroots, people-centered approach that creates opportunities for security forces and communities to build more constructive relationships to address persistent threats.

Justice institutions, supported by civil society groups and alternate dispute resolution mechanisms, can also provide options for addressing grievances that might otherwise risk playing into conflict, violence, or instability. Citizens are empowered to solve their problems when they have a range of dispute resolution options and understand each option’s benefits and limitations. Legal empowerment programs in the Central African Republic (CAR), the Democratic Republic of the Congo (DRC), and Sierra Leone have creatively applied this theory of change. In CAR, community paralegals have raised awareness about local court and other mediation options for people experiencing security threats from land conflicts and financial disputes to violent crimes like murder and rape. Networks of legal aid clinics provide information about different justice options and accompany interested parties throughout justice processes.

“Justice and rule of law underpin the development and governance that is critical to realizing security for all.”

Complementary initiatives to deploy mobile clinics to provinces where judicial infrastructure had been destroyed in conflict led to the court in Bangassou, CAR, to hold its first hearings since 2013. Mobile courts also featured in related work with survivors of wartime sexual violence in DRC, where legal empowerment initiatives by local civil society groups and international partners have improved citizen security by facilitating the military and civilian prosecution of wartime rape. Other foundational work by community paralegals in Sierra Leone and Liberia also demonstrates the import of legal empowerment for post-conflict peacebuilding.

Legal empowerment contributes to citizen security in other practical ways. For example, people need access to legal identity documents to fully exercise their civic and political rights, get married, own property, or access certain state services. Politically or economically marginalized citizens may encounter more difficulties navigating the civil and administrative justice system to secure their documentation, which risks reinforcing their exclusion and eroding community resilience. In Mauritania and Mali, refugee returnees and survivors of descent-based hereditary slavery facing such challenges have benefitted from legal empowerment programs. In Benin, where government weakness in border zones is heightening the community’s susceptibility to threats, getting citizens formal identity documents has been part of a multi-sectoral effort  to foster the public’s sense of trust in government and belonging to the nation.

Justice and rule of law underpin the development and governance that is critical to realizing security for all. Justice institutions, therefore, are an important, though often overlooked, element of the security sector. Justice officials must strive to understand the challenges faced by security actors. At the same time, security practitioners must ensure that their work is people-centered, rights-conscious, and addresses the rule of law drivers of insecurity. This requires that military, law enforcement, and intelligence actors integrate rule of law considerations into their strategies, structures, processes, and everyday operations.

Sustaining citizen security depends not only on the coordination of formal security and justice institutions, but also on the commitment of security sector officials to pursue informal ways to build trust, legitimacy, and mutually respectful relationships with citizens at the grassroots. Enhancing security at the regional, national, and community levels requires ensuring the many faces of justice and rule of law shape the responses to African security challenges and, by so doing, influence Africa’s security future.