The Islamic State and African Terrorism

The growing competition between the Islamic State (IS) and al-Qaeda for influence on Africa’s terrorist groups was the theme of a recent panel presentation by Drs. Benjamin Nickels and Joseph Siegle from the Africa Center for Strategic Studies.

The growing competition between the Islamic State (IS) and al-Qaeda for influence on Africa’s terrorist groups was the theme of a recent panel presentation by Drs. Benjamin Nickels and Joseph Siegle from the Africa Center for Strategic Studies.

“The advent of the so-called Islamic State has catalyzed something of a re-alignment in African terrorist groups” observed Dr. Nickels, Chair for Transnational Threats and Counterterrorism at the Africa Center. IS, like al-Qaeda, is trying to work through already established local groups focused on their own grievances. In the process they hope to inflate their brand and perceptions of territory they control.

IS has entered “a fragmented landscape” in Africa, though, according to Dr. Nickels. “In some cases IS’s influence in exacerbating splinters and divisions. In others, it is facilitating convergence among factions.” African leaders are simultaneously “leveraging their connections to IS for their own purposes in relation to local rivals or African governments,” he notes. “In most cases, African terrorist leaders have maintained an equal or superior balance of power with the Islamic State.”

This mutuality of interests between global and African terrorist groups was reiterated by Dr. Siegle, the Africa Center’s Director of Research. “By all accounts, the Islamic State does not provide substantial material support to Boko Haram. However, the association with the ascendant global jihadist movement does provide Boko Haram greater credibility and perceptions of capacity.” 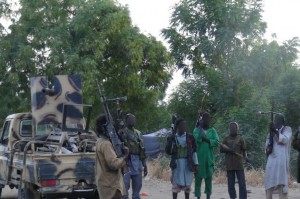 Dr. Siegle added that, “the need for this boost in standing reflects Boko Haram’s relative weakness. The group has lost much of the territory it held at the beginning of the year. Boko Haram’s increasing use of gratuitous violence, moreover, has caused it to lose whatever popular support and ideological rationale it had for its insurgency.” Claiming to be fighting for a greater Islamic Caliphate, in contrast, resonates more deeply in northern Nigeria where Islamic rule has a centuries-long legacy.

Going forward, Dr. Nickels argued that “terrorism in Africa will likely be characterized by three features. One is expansion into new areas, into places where those expressing grievances with African authorities and elites look to give their case extra weight through a narrative offering global meaning and an association with IS’s image of brash self-confidence.

“A second feature is opportunism: African terrorist groups will continue to capitalize on chaos they did not precipitate, as they did in Mali in 2012 and as they are doing in Libya today.

“A third feature is persistence: government responses have occasionally managed to displace and reduce Africa’s terrorist movements to a few hundred members. However, groups like AQIM and al-Shabaab have persevered in some form for many years, sometimes decades. Strategies focused on providing governance and addressing grievances are the long game, and their success will come not so much in the form of a defeat for terrorists but as a shrinking and eventual drying up and fading away on the continent of terrorism’s already extremely limited appeal.”

Even if terrorist groups in Africa command limited enthusiasm, Dr. Siegle emphasized the importance of addressing the ideological appeal of the extremist message in northern Nigeria and the Lake Chad Basin. “The resonance of this message is likely to persist even if the organizational structure of Boko Haram is dismantled,” he cautioned. “This will create ongoing opportunities for recruitment and the reconstitution of another terrorist entity in this region.” He explained that, “ultimately, Boko Haram and other terrorist groups in Africa are exploiting a crisis in governance, playing on grievances of marginalization and distrust of government. Remedying this will require sustained, credible engagement with disaffected communities. Similarly, in their efforts to counter terrorism and violent extremism, international actors must be mindful not to inadvertently feed the mis-governance, corruption, and predation that form the basis of extremist grievances to begin with.”