Deepening a Culture of Military Professionalism in Africa

Creating a culture of military professionalism requires instilling core societal values within all members of the armed forces. Such shared values have a powerful unifying effect on a military, amplifying force cohesion and effectiveness.

“The armed forces in many African countries represent a threat to security because of their lack of military professionalism.”

This assessment by General Mbaye Cissé, National Security Advisor to the President of Senegal, identified a focal point in a dialogue on military professionalism and professional military education among senior security officials from 30 African countries hosted by the Africa Center for Strategic Studies on December 14, on the sidelines of the U.S. Africa Leaders Summit in Washington, DC. In addition to remarks by General Cissé, the dialogue featured insights from United States Secretary of the Army Christine Wormuth and Commander of United States Africa Command, General Michael Langley. 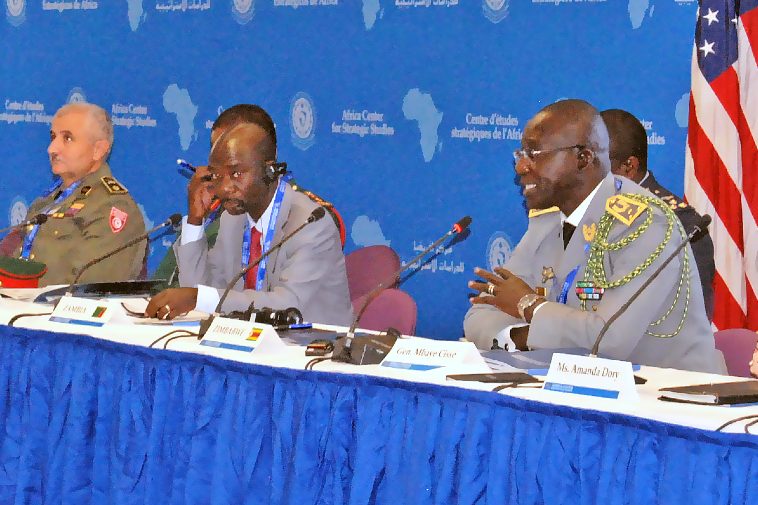 Africa has experienced seven military coups as well as several attempted coups since 2020, revealing a pattern of increasingly politicized militaries on the continent. This spate of unconstitutional changes of power upends a two-decade trend of diminishing incidences of military coups in Africa. It also risks a return to the era of misgovernance, stagnant development, impunity, and instability that characterized Africa’s military governments of the 1960s to 1990s—often referred to as Africa’s “lost decades.” Africa experienced 82 coups between 1960 and 2000.

Alarmed by the growing number of recent coups, the African Union held an extraordinary summit on the issue in May. In December, the leaders of the Economic Community of West African States, similarly, committed to establishing a regional force to restore constitutional order in member countries that experience coups.

Military professionalism is a means to effectively provide security for citizens in a manner that upholds the rule of law and safeguards human rights.

“Military professionalism is a standard of conduct upheld by members of the armed forces committed to the values of service to the public, subordination to democratic civilian authority, allegiance to the constitution, political neutrality, and respect for the rule of law and human rights.”

Achieving this requires strong ties to local communities and a commitment to educating the armed forces about their responsibilities to society. General Cissé observed that “there is a correlation between military effectiveness and the relationship between a country’s military and the public.” The rationale is that military support of community interests builds trust. This trust both mitigates against the emergence of violent extremism as well as facilitates more effective responses against security threats when they emerge. “An army that does not invest in education and ethics in relation to the population pays a price in terms of security,” he added.

Military professionalism is a particular challenge for African militaries because of the legacy of colonialism. “One aspect of the heritage of colonialism is that security forces’ main mission was repression. The forces were not united, they were artificial, and were too present in the political arena. This is an ongoing handicap,” General Cissé counseled.

For these reasons, Africa must make a dedicated effort to strengthen and sustain military professionalism.

Benefits of a professional military

Central to creating a culture of military professionalism is instilling within soldiers, from the lowest rank to the most senior officer, core societal values and principles that the military aspires to represent. Values such as integrity, honor, expertise, sacrifice, and respect for citizens do not necessarily emerge naturally but must be taught and regularly refreshed. Nearly all militaries provide tactical training and exercises—establishing core competencies. However, many lack an intentional strategy to build a set of core values. Creating such shared values has a powerful unifying effect on a military, amplifying force cohesion and effectiveness. 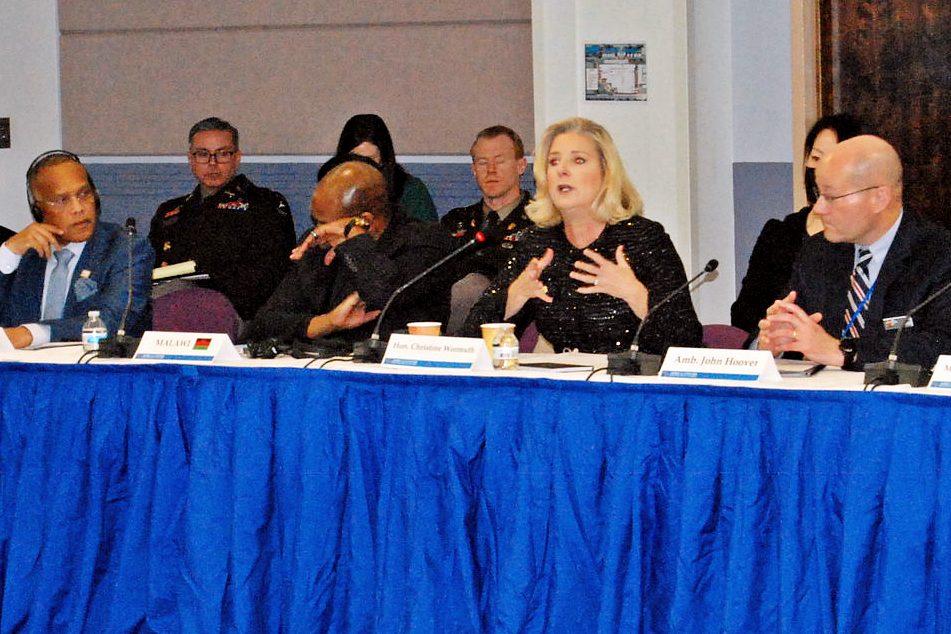 US Secretary of the Army Christine Wormuth.

An illustration of the ongoing acculturation process was an open letter released in September 2022, “Principles of Civilian Control and Best Practices of Civil-Military Relations,” by 13 former U.S. Secretaries of Defense and Chairmen of the Joint Chiefs of Staff that was widely circulated via the media to the U.S. military, policy community, and public.

General Cissé underlined “the importance of teaching military officers the value of democracy and the role of a military within a democratic society.” These values must be learned and cannot be taken for granted, especially in countries without a strong democratic tradition. He advocated for military leaders gaining experience in democratic societies so that they could deepen their appreciation for the dynamics of civil-military relations.

Senegal has emphasized public service as a core value through its “armée-nation,” the engagement of the Senegalese army in infrastructure, health, and education projects at the community level. The aim is to impart on both citizens and soldiers the understanding that the army is the nation’s army, and that its mission is not just to defend the territorial integrity of the nation, but also to contribute directly to the socioeconomic development of the country. By supporting human security, the army is also reinforcing norms of ethical behavior toward citizens. The army, thus, is engaged in both physical and human security.

Professional military education (PME) is a primary vehicle through which an ethos of military professionalism can be institutionalized. Unlike trainings, which focus on tactical skills and operational proficiencies, PME aims to cultivate leadership, strategic vision, and ethical values among a country’s military leaders.

General Langley’s experience is that PME is particularly vital for “emphasizing democratic values, including upholding the rule of law, especially in conflict.” Likewise, PME is integral for instilling respect for civilian control. The two are complementary as it is the leadership and values gained through PME that enables military officers to be effective advisors to civilian leaders, General Langley clarified.

General Cissé agreed with the importance of PME for institutionalizing military professionalism, saying “without PME, you will not have stability.” He cautioned, however, that PME must focus on the core priorities of a society. They need to be practical and relevant to the national context. In Senegal, he feels PME is an essential means of building a republican army.

Merit-based recruitment and promotion is another means by which military professionalism can be institutionalized. The pattern of recruiting predominantly from the ethnicity of the president, seen in some African militaries, creates a chain of command more loyal to the president than to the constitution. Ethnically biased armed forces lack the popular trust, legitimacy, and competency of a merit-based force, hindering its effectiveness. Selection to PME institutions, General Cissé underscored, needs to be merit-based with exams that officers must pass for promotion. Promotion, moreover, cannot be based just on field performance over classroom and ethical considerations.

General Cissé called for a new PME roadmap in Africa. He characterized the recent backsliding in military professionalism in Africa as evidence that PME needs to be reassessed and reoriented. “We have many PME academies in Africa, but we need to rethink the content they are teaching. In this sense, PME institutes are not sufficient. Nor are there sufficient resources available to support them.”

A central feature of military professionalism is trustworthy civil-military relations.

Civilian and military leaders both have critical roles in security decision-making, though they are different and complementary. Democratically elected civilian leaders are responsible for setting a vision, strategy, and policy for the security interests of a country. Military leaders are then responsible for implementing that guidance in as effective and professional manner as possible. General Langley explained, “the ultimate decision-makers are civilian leaders. My role is to provide sound advice. Every military should strive to be apolitical so they can be objective with their advice.”

“The ultimate decision-makers are civilian leaders.”

General Cissé stressed the importance of the military role being clearly defined. “It is the absence of clear borders between the political and military arenas that leads to decreased stability.”

While the civil-military relationship can be complex and entails constant effort, blending as it does two distinct sets of experiences, it also brings many strengths. Secretary Wormuth expounded that “civilians bring different perspectives and ask different questions than military leaders. Civilians also bring outside world sensitivities to military decision-making.” This leads to more well-rounded and considered decisions.

In the end, “military leaders need to trust civilian decision-making” under democratic systems, reflected Secretary Wormuth. “Civilians have the right to be wrong. Their job is to make decisions—and then to be held accountable.” 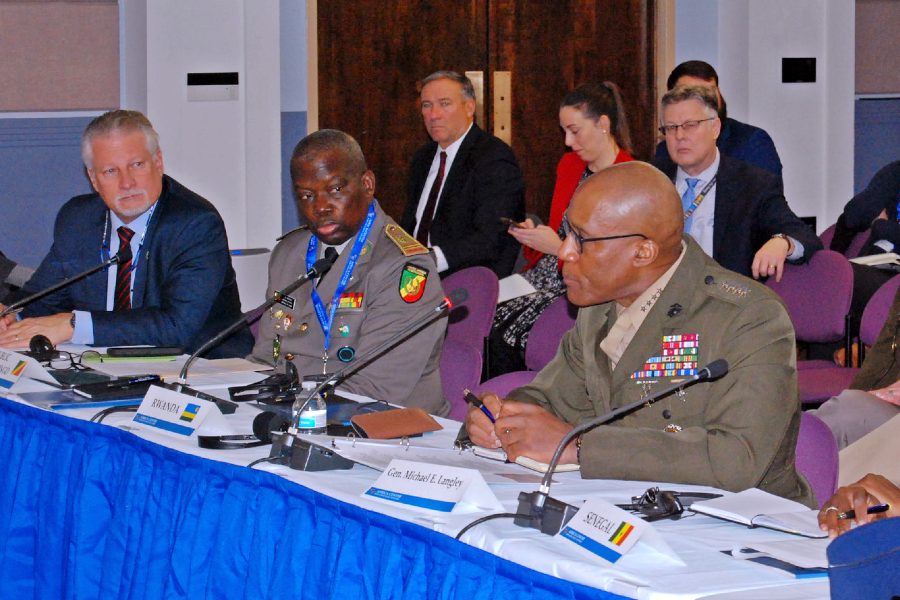 “Trust does not just happen, though. It needs to be earned, built, and nurtured,” advised Secretary Wormuth. To do so, “civilians need to work to educate themselves about the military and its background, interests, and values, so as to understand where military leaders are coming from.”

Civilians can also bring additional objectivity and balance to security decision-making, for example, by “helping to mediate intra-service debates,” observed Wormuth. “It is important for military leaders to recognize that civilians also bring value,” she added.

In short, effective civil-military relations are a two-way process that requires regular maintenance.

Security is essential for strengthening democracy and economic development in Africa. With most African conflicts and threats to citizen security emerging from domestic political crises, military professionalism can be an indispensable stabilizing factor for a society.

“We need African militaries to serve the public.”