Speaking at the start of a four-day seminar titled, “Africa’s Contemporary Security Challenges” hosted by the Africa Center for Strategic Studies, Dr. Paul Williams, an Associate Professor of International Affairs and Director of the Security Policy Studies Program at George Washington University delivered a far-reaching overview of key drivers of violent conflict in Africa. The September 22 address was part of a seminar series offered by ACSS for U.S. government inter-agency officials engaged on Africa issues.

Drawing on empirical data from various sources including the World Bank’s Armed Conflict Location and Event Data Project (ACLED) and the Uppsala Conflict Data Program (UCDP), Dr. Williams recognized that there has been a dramatic reduction of armed conflict on the African continent in the past decade.

“Empirical evidence suggests that there are fewer incidents of armed conflict, mainly concentrated along a geographical belt extending from West Africa and across the Sahel to the Horn of Africa,” he explained. “Southern Africa,” he said, “has now become the most peaceful region on the continent, which was not the case two decades ago.”

The evident progress notwithstanding, violent conflicts continue to characterize the African security environment and undermine governance and institution building in the security sector.

Dr. Williams discussed what he termed the “myths” and “realities” of African conflicts.

He challenged the argument that the end of the cold war—what some have described as the “post–cold war disorder”—was responsible for an increase in African conflicts.

This view, according to Dr. Williams, “is grounded on a state-centric model of conflict analysis and yet the reality in Africa is that most conflicts on the continent are taking place outside the African state system and many do not directly involve state-based actors.”

He also challenged what he termed as the notion of “forever wars,” an analytic construct which suggests that because of their deep historical roots, African conflicts are unlikely to be settled conclusively.

He told participants, “the truth of the matter is that those conflicts that had seemingly been resistant to resolution in the past decade have been ended; many of them through negotiated settlements.”

Dr. Williams also critically examined the argument that Africa’s wars were caused by arbitrary colonial borders. While acknowledging the impact that colonial borders had on accelerating conflicts in some situations Dr. Williams cautioned that these should not be viewed as the root cause.

“The colonial borders argument implies that ethnic homogeneity is a prerequisite for peace and yet Somalia and Rwanda, which are ethnically homogenous societies, have suffered some of the worst violence in post-colonial Africa.” He also explained that most wars on the continent have been fought to address governance issues within state borders; few have been secessionist in character.”

Also included in the list of “myths” is the argument that African conflicts are caused by ethnic differences and ethnicity. Dr. Williams noted that while ethnic undertones are evident in many conflicts ethnicity per se is not a cause. It is the manipulation of ethnic differences by political and military leaders that exacerbate conflicts and makes them much more difficult to resolve. He cited South Sudan as an example.

Dr. Williams urged participants to be mindful of the fact that resources, like ethnicity, become a major driver of conflict if their exploitation or use is tied to a political interest or the actual exercise of political power and control.

“Resources are not, in and of themselves, a cause of conflict,” he said.

The presentation also provided participants with an analytical framework to capture nuances and dynamics of conflict in Africa.

Participants were urged to include the following key elements in conflict analysis: analysis of the structures of governance, (involving such questions as who is governing and how), analysis of the power and influence of charismatic individuals and formalized power mechanisms and how these two interact in each setting, isolating root and proximate causes and distinguishing these from triggers, analysis of the economic system and how it interacts with the political process and analysis of the role and manipulation of ethnicity, religion and culture. 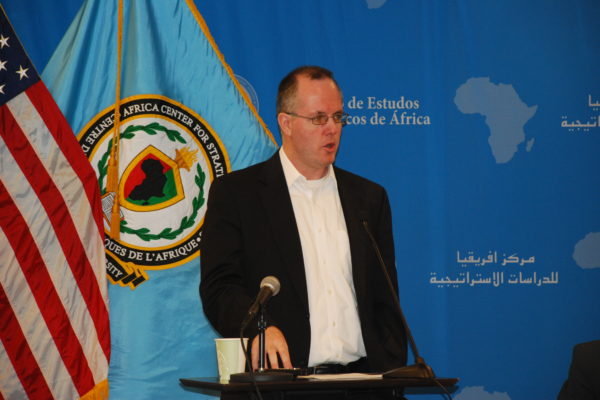 Dr. Williams identified several distinct typologies of conflict in Africa’s emerging security environment, including civil wars, coups, electoral violence, non-state armed conflicts and what he called “one-sided violence,” a term that includes terrorism and other transnational threats. The latter two are on the ascendant and account for 80 percent of the ongoing violence in Africa. Electoral violence is becoming more common and is tied to the nature of governance while coups seem to be re-emerging as a tool for political change.

The traditional model of conflict, which pits government forces and rebel groups with well-defined grievances, is on the decline.

The bottom line, according to Dr. Williams, is that the African context has become much more complex than it was a decade ago and no particular theory or set of theories sufficiently explains why wars erupt and what solution models should be applied.