China’s efforts to reshape existing global institutions and norms rely on the support of African governments, though this can often be at odds with African citizen interests.

Reshaping global institutions and norms to reflect Chinese perspectives are central to China’s approach to geostrategic competition. This is what the Chinese Communist Party (CCP) refers to as “reform” when calling on China to “take a vigorous part in leading the reform of the global governance system,” (jiji canyu yinling quan qiu zhili ti xì gaige, 积极参与引领全球治理体系改革). This concept was first adopted at the June 2018 Central Foreign Affairs Work Conference—a rarely held strategy session that gives overarching guidance to China’s foreign policy establishment. It is a cornerstone of foreign policy under CCP General Secretary Xi Jinping.

“China’s efforts to selectively reshape the workings of crucial parts of the international system … can also undermine core African norms.”

China’s desire to reshape multilateral institutions and create new ones, rests in part on its ability to enlist Global South support for its global initiatives. Africa is the largest bloc in the United Nations (UN) General Assembly with 28 percent of the votes compared to Asia’s 27 percent, the Americas’ 17 percent, and Western Europe’s 15 percent. Africa also holds more than a quarter of the votes in all UN governing bodies and is the largest bloc in other agencies like the World Trade Organization, the Group of 77, and the Non-Aligned Movement. This makes African votes critically important to Chinese efforts to redesign global institutions.

Building Coalitions in the Global South to Reinterpret Global Norms

China likes to position itself as a leader in the developing world. While China receives $5 billion annually in loans from multilateral development banks, China has steadily increased its contributions to a wide variety of multilateral development institutions over the past decade. In 2016, with African backing, China sponsored the UN Peace and Development Trust Fund with a $200-million-dollar contribution over 10 years. The Fund supports peacekeeping security, rapid response, and conflict prevention and mediation. In 2018, again with African lobbying, China placed an 8,000-strong standby force at the UN’s disposal for deployment to crisis spots.

China’s increased multilateral contributions have enhanced its voting strength across the multilateral system, giving it a greater say in shaping global agencies and their norms and work methods. 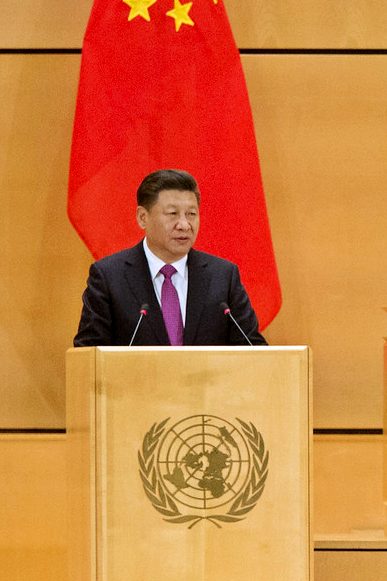 Civil society and nongovernmental organizations (NGO’s) with observer status at the UN, however, rarely have visibility on how China and its African partners leverage their representational power. For instance, during the 2018/2019 UN budget negotiations, China reportedly pushed to defund human rights monitors within UN missions, reduce NGO observers at the UN Human Rights Council, and decrease government cooperation with civil society. While these proposals failed to pass, China made clear its willingness to wield its clout inside multilateral institutions in ways that served its goals.

Some UN members (including African countries) quietly backed the measures which would have elbowed NGOs out of the UN Human Rights Council (UNHRC) and degraded the UN’s investigative capacity. This includes missions in the Central African Republic, the Democratic Republic of the Congo, Mali, and South Sudan where some of the worst rights violations have occurred.

Support by some African Union (AU) members was particularly paradoxical considering the AU’s established norms on human rights. This mirrored Chinese backing for the move by some African governments in their bid to withdraw from the International Criminal Court (ICC) in exchange for these governments’ continued backing of Beijing’s diplomatic stances.

African civil society groups and ordinary citizens were enraged as the ICC is the court of last resort when governments are either unwilling or incapable of investigating mass atrocities. They also felt betrayed by their governments as this court was created thanks to intense African diplomatic leadership.

Many African leaders also castigated their colleagues for their volte face, not least The Elders, a grouping of distinguished former presidents founded by the late Nelson Mandela. China’s anti-ICC stances, furthermore, portrayed it as being hostile to those working to address some of Africa’s deadliest conflicts. “Our own continent has suffered enough horrors emanating from the inhumanity of human beings towards human beings,” the Elders wrote, “… many of these might not have occurred, or at least been minimised, had there been an effectively functioning International Criminal Court.”

African votes were decisive in the UN General Assembly debate in 1971 that returned Communist China to the UN and expelled Taiwan. According to Mao Zedong, China owes Africa a debt of gratitude for “carrying the People’s Republic of China  into the United Nations,” a standard talking point in all Forum for China-Africa Cooperation (FOCAC) meetings.

African countries remain key to China’s efforts to isolate Taipei. Presently, only one African state—Eswatini—recognizes Taiwan. Moreover, African leaders frequently condemn high-level engagements with Taiwan. In fact, China’s bilateral and regional agreements in Africa include two standard elements: the “One China Principle” and mutual support on global governance issues. These are spelt out in various memoranda of understanding between the AU and China, and more recently, the Forum of China-Africa Cooperation Dakar Action Plan (2022-2024). “Mutual support in the global governance system,” was part of a four-point agenda of Chinese Foreign Minister Qin Gang, during his 5 nation African visit in January 2023.

“China’s bilateral and regional agreements in Africa include two standard elements: the “One China Principle” and mutual support on global governance issues.”

China has long counted on Africa’s consistent support in a web of multilateral institutions. In 2017, AU members helped adopt China’s first-ever resolution in the UNHRC titled “The contribution of development to the enjoyment of human rights.” It passed easily with 30 in favor, 3 abstaining, and 13 against. All 11 African countries voted “yes.” This resolution articulates a version of human rights centered on “non-interference,” “quiet dialogue,” and state-led economic development as alternative interpretations of human rights.

In 2020, all but one African UNHRC member voted “yes” to another Chinese resolution, “Promoting mutually beneficial cooperation in the field of human rights,” that inserted elements of “Xi Jinping Thought” into UN human rights text for the first time. Xi Jinping Thought refers to a compendium of policies and ideas including the supremacy of party control over the state, the Peoples Liberation Army (PLA), economic sectors, and an approach to human rights centering on collective rights as opposed to individual rights.

During the 2019/2020 and 2021/2022 UN debate cycles, no African country signed on to a series of draft communiques critical of Chinese policies in Xinjiang, Tibet, and Hong Kong. In October 2022, only Somalia among African countries voted “yes” to a resolution on holding a UNHRC debate on China’s alleged human rights violations in Xinjiang. The measure was defeated, with the majority of the African bloc voting against.

More broadly, African votes were essential in helping Chinese nationals win elections to lead 4 of the UN’s 15 principal agencies and the deputy slots in 9 others. China, in turn, helped African nationals win elections to lead another four of these agencies. Similarly, over the past decade and a half, China has relied on African votes to increase its representation within the UN Secretariat and five UN funds and programs, as well as in other international trade and financial institutions.

Africa has also been pivotal to China’s ongoing efforts to construct an alternative architecture of global institutions. South Africa is a founding member of the Beijing-based New Development Bank—created in 2014 by the BRICS states (Brazil, Russia, India, and South Africa) to provide a mechanism outside the World Bank for borrowers to access Chinese-backed loans and other financial instruments. Similarly, 10 African countries and 9 prospective ones have joined the Asia Infrastructure Development Bank—another alternative lending mechanism created by China in 2015.

African governments have also sought to increase their participation in Chinese-led security organizations and initiatives, hence conferring on them some international legitimacy. For example, China’s latest global initiatives, the Global Development Initiative (GDI) and the Global Security Initiative (GSI) received early African endorsement at the eighth FOCAC in Dakar and have been incorporated into the FOCAC Dakar Action Plan (2022-2024).

The GSI is the external-facing part of China’s new security concept called “comprehensive national security” (zongti guojiaan quan, 总体国家安全). GSI tenets include noninterference in internal affairs, opposition to unilateral sanctions, and “indivisible security,” meaning China’s security cannot be de-linked from the security of its partners. The GSI aims, in part, to forge a cooperative security perspective with its African partners whose support Beijing can count on to advance Chinese security interests. During the second China-Africa Peace and Security Forum in June 2022, Xi Jinping told the delegates to institute GSI concepts in its work so as to uphold a “common” approach for the two sides.

“In the past decade, China has been behind the creation of more multilateral organizations than its peers on the UN Security Council.”

Theories abound as to why African countries seem so determined to help China selectively reshape certain global institutions. African leaders give different reasons, ranging from their solidarity with China owing to its support for their anti-colonial and anti-apartheid wars, to their belief that a resurgent China will make the world more multipolar. Africa, like China, has called for global system reform and looked for powerful allies to back its “2005 AU Ezulwini Consensus” which decries Africa’s lack of representation in multilateral institutions and calls for specific reforms to be instituted.

A Bolder and More Assertive Approach

While China has always pursued global preeminence, it initially sought to be unobtrusive and progress stealthily with a low profile. The Chinese Communist Party has signaled that the era of discretion is gradually being replaced with a bolder and more assertive approach. In the past decade, China has been behind the creation of more multilateral organizations than its peers on the UN Security Council. Notably, China’s quest to “reform” international governance has found willing partners in the Global South, including Africa, which has played no small part in advancing China’s international project.

However, China’s efforts to selectively reshape the workings of crucial parts of the international system—such as its human rights system—can also undermine core African norms and commitments such as those on constitutionalism, human rights, and democracy. 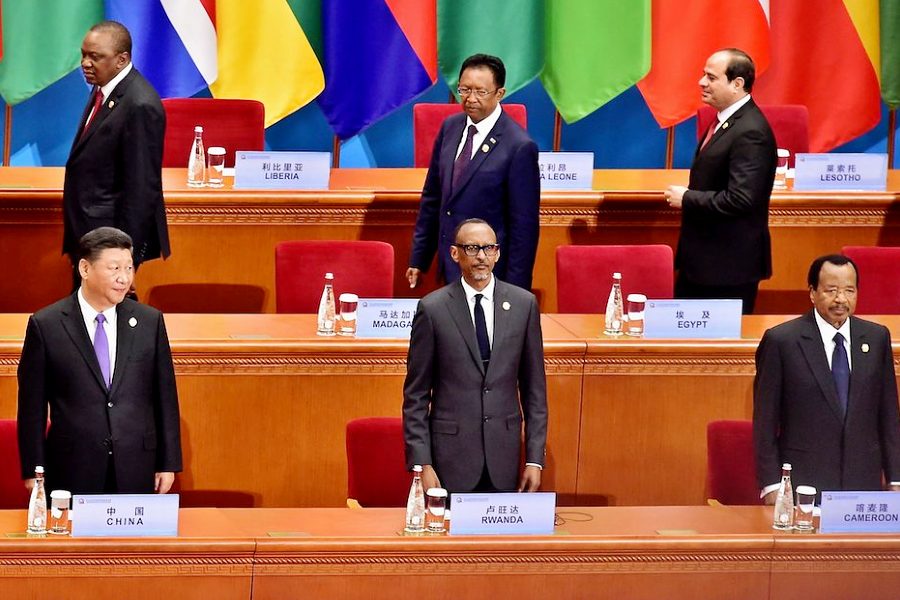 Xi Jinping and African leaders at FOCAC in 2018.

African NGO coalitions are increasingly locking horns with their own governments and Chinese diplomats during crucial votes, especially at the UN Human Rights Council. The key messages these non-state actors are sending is that African governments’ strategic engagements with China should not violate core African principles, norms, and commitments to citizens. There is a tendency to paint these as “Western concerns.” The truth is Africans codified them in their struggles for independence.

As they navigate their interests, then, African governments should be wary of weakening the integrity of global institutions concerned with the very priorities many Africans hold dear.

More On: China in Africa