Priorities for Security and Justice during Liberia’s Transition

The incoming administration of Liberian President-elect George Weah will need to address numerous pressing challenges related to the country’s security and stability. This is all the more critical as the United Nations Mission in Liberia (UNMIL) is drawing down and plans to depart the country in March 2018, after 15 years in country.

The incoming administration of Liberian President-elect George Weah will need to address numerous pressing challenges related to the country’s security and stability. This is all the more critical as the United Nations Mission in Liberia (UNMIL) is drawing down and plans to depart the country in March 2018, after 15 years in country.

Corruption in the security sector remains endemic, particularly among the police. The most recent Afrobarometer survey, conducted among Liberians, found that trust in the police was extremely low. Only 2 percent of Liberians say that the police were not corrupt. This compares to 44 percent who believe that all police are corrupt and 42 percent that don’t trust the police at all. Police officers reportedly routinely extort money from citizens at all stages of a case, from registering citizen complaints, to requiring money to go to a crime scene, to obtaining release from detention. Moreover, police officers are known to prey on civilians, for example, by setting up roadblocks and extorting travelers or by seizing the goods and money of street vendors on the grounds that they are not operating legally. Sixty percent of Liberians say that the police need additional training. Only 23 percent of Liberians said they did not trust the AFL at all, with the rest reporting varying degrees of trust in this institution, which has been revamped since the war. (Photo: US Army Africa/Rick Scavetta)

The justice sector fares somewhat better but still engenders low levels of trust. Some 25 percent of Liberians don’t trust the courts, and 23 percent believe that all judges are corrupt. Only 3 percent feel judges aren’t corrupt.

The Armed Forces of Liberia (AFL) are an exception. Only 23 percent of Liberians said they did not trust the AFL at all, with the rest reporting varying degrees of trust in this institution, which has been revamped since the war.

These widely different levels of trust toward the country’s security sector institutions will bear heavily on the political transition. Perceptions of trust of the security and justice sectors are especially important since experience shows that when the public doesn’t have confidence in the institutions whose mandate is to protect citizens, then violence is more likely as individuals feel they need to take the law into their own hands.

Experience shows that when the public doesn’t have confidence in the institutions whose mandate is to protect citizens, then violence is more likely as individuals feel they need to take the law into their own hands.

The Liberia Anti-Corruption Commission (LACC) was set up to provide an instrument for curbing abuses by government entities. However, the LACC has struggled to be effective. It has faced challenges in obtaining the information it needs from senior officials, be it asset disclosures or cooperation in building cases against government officials. The LACC is further handicapped because it only has authority to investigate, not to prosecute. In November 2016, for example, it abandoned a high-profile case on the misappropriation of $5.7 million in petroleum sales because the Ministry of Justice decided against proceeding with the case due to insufficient evidence. This reliance on the Ministry of Justice is a weakness in that it potentially adds a political barrier to the prosecution of criminal cases.

Given the history of using resources from Liberia’s extractive industries to sponsor conflict and instability, further strengthening the Liberia Extractive Industries Transparency Initiative (LEITI) will be a critical priority. LEITI monitors transparency in Liberia’s extractive industries, including timber, gold, and iron ore. Transparency in these industries, which have long suffered from opaque management structures and have been used to reward political actors for their patronage or to fund conflict, is crucial for sustaining peace and security. A 2013 study found that 53 percent of the country’s total land, including land that was traditionally communal, had been given as private, commercial concessions.

LEITI has also found that only 10 percent of contracts issued between July 2009 and December 2011 complied with the relevant rules. The government’s work to meet international standards such as those for diamonds outlined in the Kimberley Process, therefore, needs to continue. Strengthening these institutions will be important to building trust in government among Liberians, as well as helping to ensure that government revenue is used properly and for the benefit of the country’s citizens.

A 2013 study found that 53 percent of the country’s total land had been given as private, commercial concessions.

The new presidential administration will find that none of the country’s security institutions, in particular the police, are adequately deployed throughout the country. All lack personnel and operating resources. The Liberia National Police (LNP) stands at just over 5,100 officers, including 970 women. But 3,858 are deployed in Monrovia and surrounding Montserrado county, leaving only 1,284 officers for the rest of the country. Moreover, many police stations in the country lack electricity, potable water, basic office equipment (such as a photocopier or a computer), communications equipment (such as telephones), and vehicles to respond to citizen requests. Many police officers therefore charge victims a fee for the paper required to write up a report and the gas needed to get to a crime scene—should they have a mode of transportation. According to the Inspector General of the Police, the LNP’s budget of $15 million per year mostly pays for salaries, leaving only $2.5 million for operations. 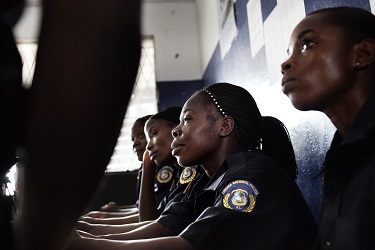 Liberians view the Inspector General of Police’s Complaints Review Board as largely ineffective because officers accused of corruption have rarely faced prosecution. Moreover, according to UNMIL, the Policy Management and Civilian Complaints Review Boards required by the 2016 Liberia National Police Act are not operational. As a result, Liberians believe that reporting abuses is useless and in fact could lead to retaliation against them.

The Armed Forces of Liberia (AFL), which currently stand at 2,000 personnel (as was determined by the 2008 National Security Strategy), requires institutionalized training processes to maintain readiness and build capacity. According to UNMIL, insufficient funding has hampered the AFL’s ability to operate outside Monrovia. Specifically, cuts in the defense budget, from $13.5 million per year in 2015, to $11 million in 2017 are said to have caused a decrease in readiness. The circumstances and rules of engagement under which the AFL can use force to support the LNP in providing internal security, moreover, needs to be clarified. For example, during the Ebola epidemic, when the AFL was called upon to support the enforcement of a quarantine, it was criticized for using deadly force rather than resorting to non-lethal means.

Within the AFL, building accountability and trust will be helped by the August 2017 adoption of a Code of Military Justice. One challenge in implementing the code will be to ensure that enough military lawyers are trained to adjudicate cases and represent soldiers and officers accused of misconduct.

Liberians believe that reporting abuses is useless and in fact could lead to retaliation against them.

Liberians are frustrated with the lack of progress in the national reconciliation process. According to the Afrobarometer survey, Liberians are evenly divided on the effectiveness of the government’s handling of national reconciliation. The failure to fully implement the recommendations of the 2009 Truth and Reconciliation Commission (TRC) Report contributes to a sense of uncertainty over whether reliable institutions of justice will be built to address grievances. Other outstanding recommendations, including the creation of an Extraordinary Criminal Court (which would be empowered to try individuals accused of war crimes, crimes against humanity, and other serious violations of international humanitarian law) and the creation of a mechanism for paying reparations (which the TRC said would cost $500 million) require joint action from the executive, the House of Representatives, and civil society (for example, the Liberian Bar Association). Given the various stakeholders involved, these recommendations have been difficult to implement. Nonetheless, to strengthen security and confidence in Liberia’s justice institutions, the new administration will need to show progress in implementing the TRC’s recommendations. Other priorities include the Palava Hut, whose establishment was recommended by the TRC. The Huts provide a community-level forum for discussing problems and coming up with peaceful solutions to non-criminal disputes. They are also the venue through which community members can be forgiven for acts committed during the war. Their implementation was long delayed due to lack of funding, the Ebola outbreak, and logistical challenges. However, in late 2016 and early 2017, Palava Hut hearings were held in two of 14 counties. During these hearings, “269 war-related victim statements were recorded and 177 cases were amicably resolved.” Clearly these forums remain in high demand by citizens who continue to seek resolution for the trauma they suffered during Liberia’s long and brutal civil war. They need political support and funding. Moreover, the Huts are not equipped to provide accountability for gross human rights violations, something the formal justice system should be doing but has not yet.

County Security Councils (CSCs), which serve both as early warning mechanisms and a structure through which security and justice concerns can be discussed, should also be expanded and supported. The councils—“the local version of the National Security Council”—are chaired by the superintendent of each county. The CSCs are composed of the county heads of the Police, Immigration, the National Security Agency, and the Liberia National Fire Services, as well as other civilian authorities including the paramount, clan, and town chiefs. The CSCs are responsible for physical security, as well as for disaster and crisis management. They allow civilians to give input to decisions regarding the security sector and help inform policies by sharing concerns not only about physical security but also about socioeconomic, health, and disaster management. To support improved access to justice for Liberians outside of Monrovia, the Regional Justice and Security Hubs, which operate in 13 of 14 counties, need to be fully funded, staffed, and supported. These hubs bring a court, immigration, police, corrections, and prosecutions to a single location, help to increase accessibility, and speed up service delivery. Pilots of the Regional Justice and Security Hubs indicate that each hub would require $500,000 to operate annually.

Making progress in fighting corruption, strengthening the capacity of the security sector, and building trust will be critical for maintaining stability and building momentum for peace in Liberia. This will require strengthening both domestic ownership and oversight (through the legislature and civil society), as well as international funding and technical support (through UN institutions, donors, and NGOs). Publicly engaging Liberians in these efforts will be equally vital so that citizens know that their government is working for them and mobilizing the cooperation needed to improve security during the fragile transition period.