The violent crackdown on the peaceful opposition in Chad exposes the coercive intimidation behind the military junta’s unwillingness to facilitate a genuine democratic transition.

Carrying signs against monarchy and impunity, young supporters of the Wakit Tama movement demonstrate in N’Djamena against the military junta. (Photo: Djimet Wiche/AFP)

Security forces opened fire and killed dozens of protesters in Chad during the October 20 demonstrations against the military junta’s refusal to honor its 18-month transition timeframe. At least 50 people were killed, though opposition leaders claim the death toll was more than 100. Hundreds more were injured and arrested. The military junta placed major urban centers under curfew and banned political activities and gatherings following the deadly events.

In the weeks since the protests, security forces have rounded up opposition supporters, harassed opposition leaders, and targeted their headquarters. Led by the political party, Les Transformateurs, and the civil society movement, Wakit Tama (“The Time Has Come”), the civilian opposition has continued to call out the junta’s lack of legitimacy and demand that it step down from power.

How Did We Get Here?

This military-led hereditary succession ignored the constitutional provision that interim executive powers pass to the president of the National Assembly in the event that the head of state dies in office. Elections should then be held within 90 days. Instead, upon seizing power, Mahamat Déby promised to lead a transition to an elected government within 18 months. That deadline was missed on October 20, 2022, absent any effort by the junta to organize elections.

The Faux Dialogue of a Non-Transition

Déby’s regime has used the parlance of political dialogue to create the masquerade of a political transition and appease international stakeholders, while gaining some support from longtime rivals at little expense to his control.

“Déby’s regime has used the parlance of political dialogue to create the masquerade of a political transition.”

Several groups, including the UFDD and UFR, signed an accord in August after months of negotiating in Doha in return for the release of prisoners, amnesty, and an end to hostilities between the government and these armed factions. However, other armed groups, including FACT and CCSMR, refused to join the accord. These two groups continue to maintain armed opposition to the military junta from their bases in southern Libya.

Less than 3 weeks after the Doha Accord, the junta organized a Sovereign Inclusive National Dialogue (DNIS) in N’Djamena. The DNIS brought together some 1,400 participants from the junta, elements of the armed opposition, certain members of the civilian opposition, civil society, traditional and religious groups, and professional associations. Nonetheless, the executive board of the DNIS, the Presidium, was selected by the junta and pursued an agenda under Déby’s purview. Though open debate by participants was allowed and diverse views incorporated, the junta controlled the parameters and, by consequence, the content of the dialogue. 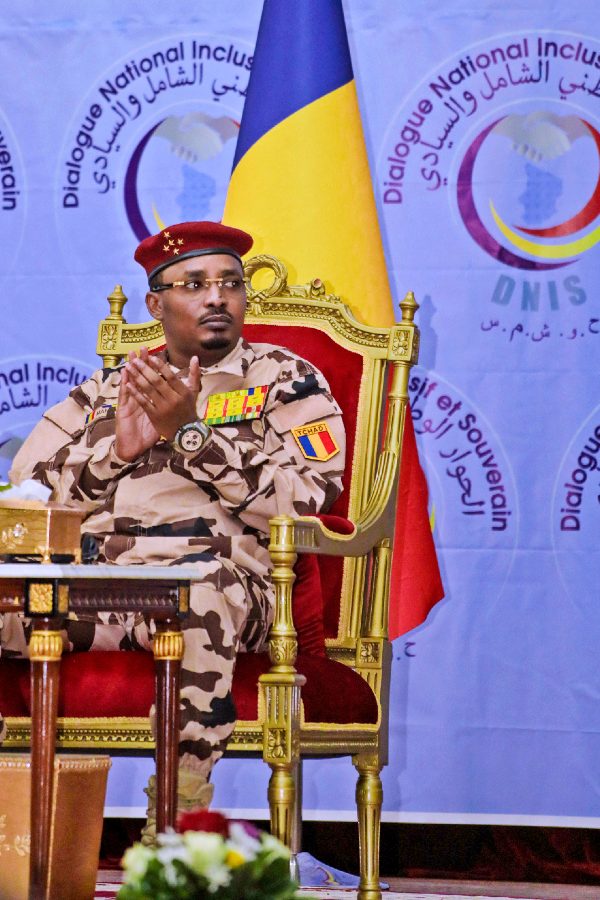 Meanwhile, critical opposition groups boycotted the dialogue, recognizing it as illegitimate and called for civil resistance. Others withdrew as it became clear the junta intended to force through its own agenda including the prominent appointment of some seasoned opposition leaders. These critical opposition groups and their leaders were harassed by security forces during the DNIS. In September, security forces ransacked the headquarters of the leading opposition group, Les Transformateurs, and a state’s prosecutor compelled the party’s leader, Succés Masra, to appear in court. As he departed the party headquarters for the court surrounded by supporters, security forces shot tear gas into the crowd and arrested dozens.

Despite the violence, exclusion, and boycott of many groups, the DNIS adopted a resolution at its conclusion on October 8 extending the transition for another 24 months. The proclamation ostensibly dissolved the military junta but retained Mahamat Déby as Transitional President, controversially stating that members of the junta (to include Déby) and the transitional government would not be barred from contesting future elections. The DNIS left ambiguous what bodies would organize subsequent elections.

Violent Crackdown by the Déby Regime

Following the DNIS, Mahamat Déby named longtime opposition leader, 75-year-old Saleh Kebzabo, as interim Prime Minister. Kebzabo then selected a new government, which included other former opposition leaders as well as some previous leaders of armed opposition groups who participated in the DNIS. Many of these elites represent a co-opted old guard of the political opposition in Chad from the generation of Idriss Déby who may have concluded this was their last chance for power. They have not been part of the current civilian opposition and protest movement. 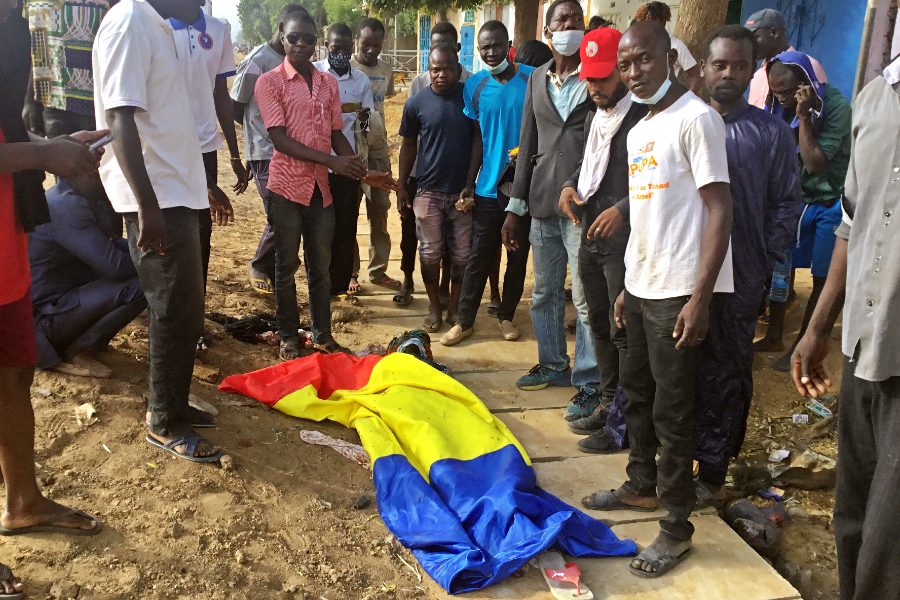 A body covered by a Chadian flag and surrounded by fellow demonstrators in N’Djamena on October 20, 2022. (Photo: AFP)

The leaders of the current opposition, including Les Transformateurs, Wakit Tama, and other prominent groups, refused to accept the new Déby-imposed 24-month political transition. Other political parties and civil society actors, which did not take part in the DNIS, also rejected the legitimacy of the junta, seeking instead to hold Déby to his 18-month deadline to return power to civilians. These groups organized thousands across the country in a peaceful march against the extension of the Déby regime on October 20. They were met with live ammunition by the security forces, killing at least 50 demonstrators and injuring hundreds.

In the aftermath of the violent crackdown on protesters, the military government has sought to characterize the demonstrations as a violent insurrection and to tarnish the credibility of the opposition’s leaders. The government’s spokesperson has described the protesters as thugs brandishing weapons and ready to do battle with the security forces. Former opposition leader turned junta Prime Minister Kebzabo has claimed the demonstrators were drugged and intoxicated before marching in the streets and threatening security forces.

The United States Department of State quickly condemned the violence noting that “the United States regrets the results of the Chadian National Dialogue and their consequences for an inclusive, peaceful, and timely transition to a democratic and civilian-led government.”

“Repression and violence against the opposition have continued since the October 20 demonstrations.”

Repression and violence against the opposition have continued since the October 20 demonstrations. Multiple bodies have been found in the Chari and Logone rivers which flow through the capital, N’Djamena, and the second largest city in the country, Moundou. The junta’s Minister of Justice, Mahamat Ahmat Alhabo, has acknowledged that more than 600 protesters have been detained and sent to the infamous desert prison of Koro Toro. Many remain unheard from since the protests. Succès Masra, leader of Les Transformateurs, has sought refuge in neighboring Cameroon after his party headquarters were again looted by security forces and dozens of his party members arrested. Reports indicate that other opposition supporters have been rounded up and detained by the security forces at undisclosed locations.

The violent crackdown against the October 20 demonstrations marks the continuation of a repressive political tradition of the Déby family, under which the Chadian population has suffered for decades. Political assassinations, torture, disappearances, and rebellions punctuated the 30 years of political instability under Idriss Déby.

Where Are Things Headed?

Paradoxically, the Déby regime has benefitted from its perceived stabilizing role in the tumultuous crossroads of North, West, and Central Africa, even though instability and insecurity were pervasive under Idriss Déby. Meanwhile, the Chadian population has remained one of the poorest countries on the planet, ranked 190 of 191 by the UNDP’s Human Development Index, despite becoming a petroleum producer and exporter in the 2000s. Similarly, Transparency International ranks Chad 164 out of 180 countries on its annual Corruption Perceptions Index.

Mahamat Déby’s efforts to indefinitely hold onto power and sweep the events of October 20 under the rug will likely continue. However, more and more Chadian actors are calling attention to the untenable situation.

Demonstrators in N’Djamena carry signs calling for “security for all.” (Photo: Djimet Wiche/AFP)

Succès Masra has filed a case with the International Criminal Court against the regime for its human rights abuses against protesters. The Archbishop of N’Djamena has publicly admonished how transitional authorities have characterized the fallen demonstrators as thugs, calling on Chadians to come together during this uncertain time. FACT, the largest armed opposition group, has continued to call for democratic change and for Mahamat Déby to step down.

International actors, including leaders of the African regional organizations, have often given the Déby regime a pass for its human rights violations given its regional security role. Doing so, however, has broader implications. Other coup leaders and military governments in Africa are looking to Chad to see what will be deemed palatable. If Mahamat Déby can kill peaceful protesters and stand for elections in 2 years, then why not Assimi Goïta in Mali, Mamady Doumbouya in Guinea, or Ibrahim Traoré in Burkina Faso? Likewise, if Déby stays on, then what are the incentives for Abdel Fattah al-Burhan to step aside for the civilian transition in Sudan?

Often overlooked is that there is a legitimate civilian opposition in Chad calling for democratic change. The failure of regional and international actors to recognize these opposition groups increases the likelihood of a ratcheting up of political violence and conflict in Chad, which will be highly destabilizing for the region. Such an outcome is avoidable but will require moderation of the Déby regime’s posture toward the opposition and a genuine path forward for democratic progress.

More On:  Democracy  The Sahel