The coronavirus is placing severe strains on Africa’s health, economic, and security sectors. Mitigation and suppression efforts will require a comprehensive government response built on clear communications and public trust.

As COVID-19 spreads in Africa, the effects could be devastating—even for a continent accustomed to battling infectious disease. COVID-19 endangers African lives and African economies, and efforts to control the disease will themselves come with an enormous economic and social price. In South Africa, President Cyril Ramaphosa said the pandemic has become a “national disaster.” Never before, he said, “in the history of our democracy have we been confronted by such a severe situation.”

What Does COVID Mean for Africa?

The regional chief of the World Health Organization (WHO) has said that Africa is experiencing an “extremely rapid evolution” of numbers of COVID-19 cases. As the virus has followed its slingshot path around the world, countries elsewhere have seen surging numbers overwhelm local health systems, offering ominous examples for those that are later in this global sequence.

In the fight against the novel coronavirus, Africa does have certain advantages. Demographics are on its side. The median age of Africa is under 20 years—less than half that of Italy—and international data shows that risk of serious medical complications and death from COVID-19 rises significantly with age. Additionally, Africa has experience confronting infectious diseases, including the Ebola epidemic in West Africa in 2014-2016. Many African countries have made improvements in health security since that outbreak, including the establishment of the Africa Centres for Disease Control and Prevention. Finally, there is an unresolved scientific debate as to whether warm weather will inhibit spread of the virus. The pandemic, however, could overwhelm those advantages, and Africa’s health, economic, and security sectors will be at the frontlines of this fight. 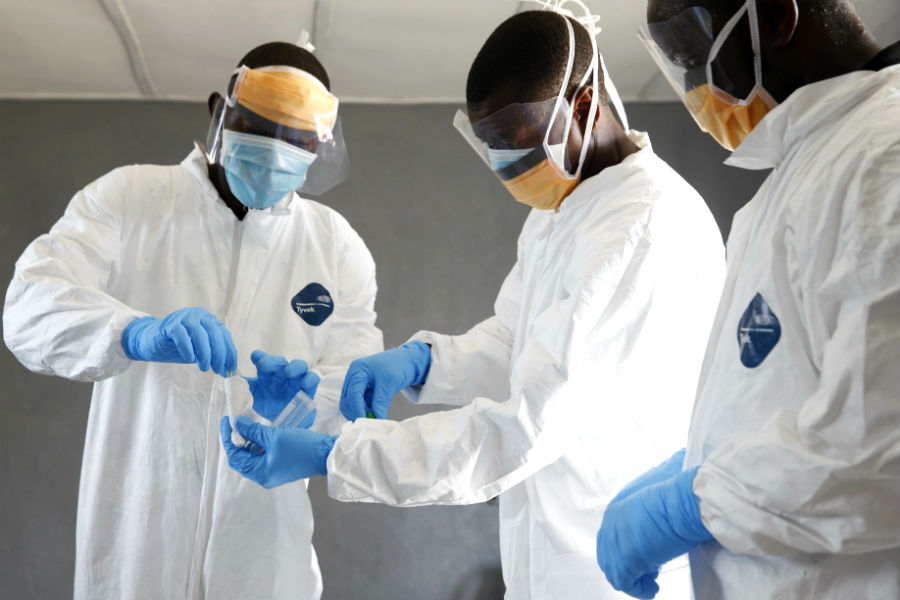 The health challenges of COVID-19 for the continent are daunting, with a serious potential loss of life in Africa either directly or indirectly related to the COVID-19 virus:

When the novel coronavirus outbreak first began in Wuhan, China, its possible economic impact on Africa, through Sino-African trade and tourism ties, was immediately apparent. As the disease has transformed into a pandemic, however, its adverse economic impacts have also become globalized.

The tools that countries have adopted to try to mitigate the spread of the disease—closing borders, cutting off flights, shuttering schools and universities, encouraging or requiring physical separation or sheltering in place, and ordering the closure of businesses and even entire industries—all exact a high economic cost. For Africa’s oil and other commodity exporters, plummeting prices add to the distress.

“One in three Africans live below the global poverty line. Those who live on the economic margins are most vulnerable to lockdowns and other measures instituted to prevent transmission.”

The economic impact of COVID-19 in Africa may now be considered through three lenses: the Chinese, the global, and the national:

The cumulative impact of these economic body blows has to be measured in the context in which one in three Africans live below the global poverty line. Those who live on the economic margins are most vulnerable to lockdowns and other measures instituted to prevent transmission. Basic food security becomes an immediate concern. 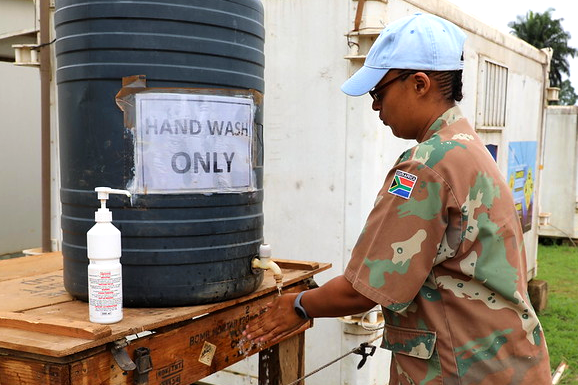 A member of MONUSCO practicing measures to avoid the spread of COVID-19. (Photo: MONUSCO/Michael Ali)

COVID-19 is also intersecting with security institutions and political processes on the continent:

The direct and indirect human costs of this pandemic for Africa will rise. COVID-19 may well contribute to more deaths through indirect effects (overtaxed health systems, the loss of health workers to illness, reduced incomes, and perhaps social unrest) than from COVID-19 itself. Africa, like the rest of the world, cannot avoid many of these costs, but it can try to avert the worst effects. There is no exact playbook for this situation. However, here are some lessons learned thus far:

The two primary tools against COVID-19 are mitigation and suppression. Mitigation seeks to slow the spread to reduce the demand on the health system and protect those at highest risk. Suppression uses lockdowns or other restrictions to try to reverse the growth of the epidemic. The Africa CDC, drawing on a modeling study by Imperial College in the United Kingdom, reports that a combination of mitigation measures could cut the number of deaths from the disease in half. These include:

The study also shows, however, that in order to reverse the rising numbers, broader suppression or lockdown measures are needed, including closing schools and universities, prohibiting gatherings, and “social distancing the entire population.” 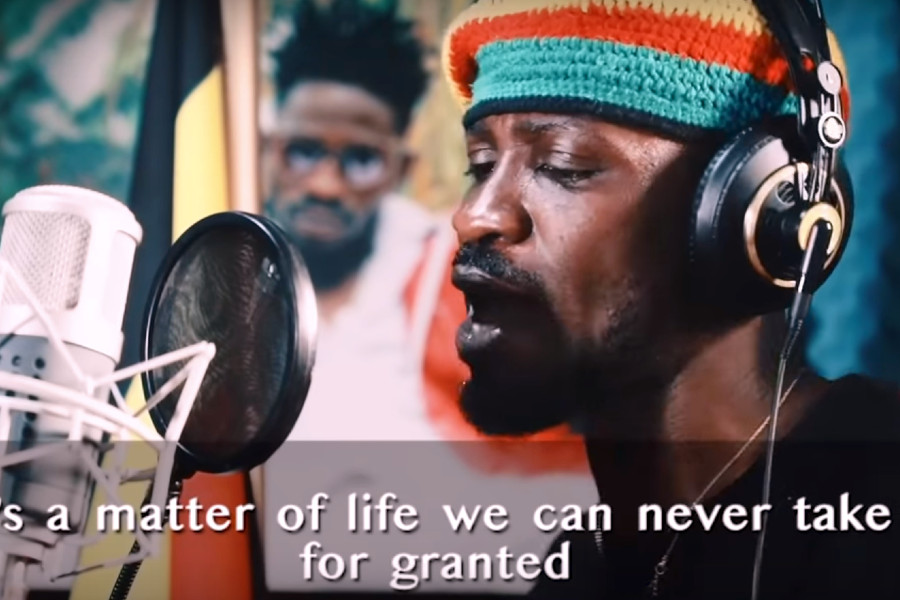 Bobi Wine recording a song to sensitize listeners to the threat of COVID-19. (Photo: screen capture)

Governance is crucial to public health. Governments from the local to the national must work together to address the growing COVID-19 threat. Countries, as detailed in the medical journal The Lancet, should activate National Response Management protocols if they have not already done so and should initiate risk-based strategies that will depend upon where a country stands in terms of the stage of the outbreak. In the earliest phases, with few-to-no confirmed cases and little community transmission, contact tracing and testing patients with acute respiratory infections are vital steps. In 2014, Nigeria successfully averted a disaster when it aggressively pursued tracing after the introduction of Ebola.

Most of Africa is still in this early stage with COVID-19. However, as African countries move into more advanced stages, protecting health care workers will take on even greater importance as demand and risk both rise. Maintaining the shutdown of physical contact and economic interaction while meeting the basic needs of those sheltering in place becomes of paramount importance in these phases. This is where military forces may be able to provide assistance through managing logistics for food and water access and using other skills honed in emergency preparedness training.

“Governments should communicate rather than simply compel.”

Maintaining public trust during the course of this pandemic will be essential. Governments should communicate rather than simply compel. Strategic communications are a crucial element for public health. The Ebola epidemic in West Africa ended ultimately because of behavior change under very difficult circumstances. This required community input, local interlocutors, and communication. Government officials must set good examples in terms of social distancing, self-quarantine when needed, and candor.

Beyond active health measures, governments will also have to address the coronavirus comprehensively.

In its guidance, the African Union has said, “Limiting transmission and minimizing harm from COVID-19 will require an all-of-government approach. Social unrest could result from healthcare facilities having insufficient capacity, stock-outs of essential food, medications, or other supplies, and resistance to social distancing policies that limit work, school, cultural events, and/or religious practice. … All government agencies will need to be involved in implementing COVID-19 response activities, including, for example, finance, justice, trade, agriculture, education, and finance.”

International assistance will also be needed, but may be slower in coming and less plentiful than the unmet need as Africa could find itself the last epicenter of the disease.  While tests, therapeutic drugs, and vaccines will probably all be developed with rapid speed, relatively speaking, they may still take months to develop and more time still to distribute.

Border security is important but so is cross-border trade and international cooperation. Those factors will have to be balanced. Entire sectors, such as aviation and tourism, will be hit especially hard. Countries will have to rewrite budgets and re-allocate resources to adjust to these new realities. Economic effects of a lockdown will be felt most by those who have least. Accordingly, resources will need to be directed to those communities that are in need.

Individuals in every country should take the steps recommended by the WHO, Africa CDC, U.S. CDC, and others to avoid infection and helping protect those most at risk:

Individuals can also fight misinformation, which can be deadly.  Africa Check, Africa Fact Check, and the Africa CDC are all good sources to consult.