While Russia has little to offer Africa economically, the political incentives for Moscow to engage on the continent have only grown stronger following its invasion of Ukraine.

As Russia seeks to evade international isolation following its invasion of Ukraine, expanding Russia’s economic engagements in Africa has taken on greater importance. The more active Russia is seen on the global stage, the more Moscow can project the image that it is insulated from such pressures—and that it still has many friends.

Africa would seem to offer promising prospects. More than any other region, African governments have been reluctant to condemn Russia’s violation of the territorial integrity of its neighbor. And with the premium on economic development, many argue that Africa doesn’t have the luxury of criticizing potential economic partners.

So, it is unsurprising that Russia is heavily promoting economic opportunities to Africa—from commodity sectors like agriculture and hydrocarbons to technology fields such as energy, transport, and digitization.

“Russian trade with Africa … has declined each year since 2018.”

Russia faces numerous obstacles with its sales pitch, however. To start, Russia’s GDP of $1.4 trillion is equivalent to that of Brazil or Spain. And it is projected to contract by 5.5 percent through 2023 and not recover its pre-war value until 2030. This follows a 5.1 percent drop in Russian GDP per capita between 2010 and 2020.

Revealingly, Russia invests little in Africa, contributing less than 1 percent of the foreign direct investment (FDI) going to the continent. This shows Russia’s limited commitment to Africa, as would be demonstrated by capital investments involving a longer-term return. 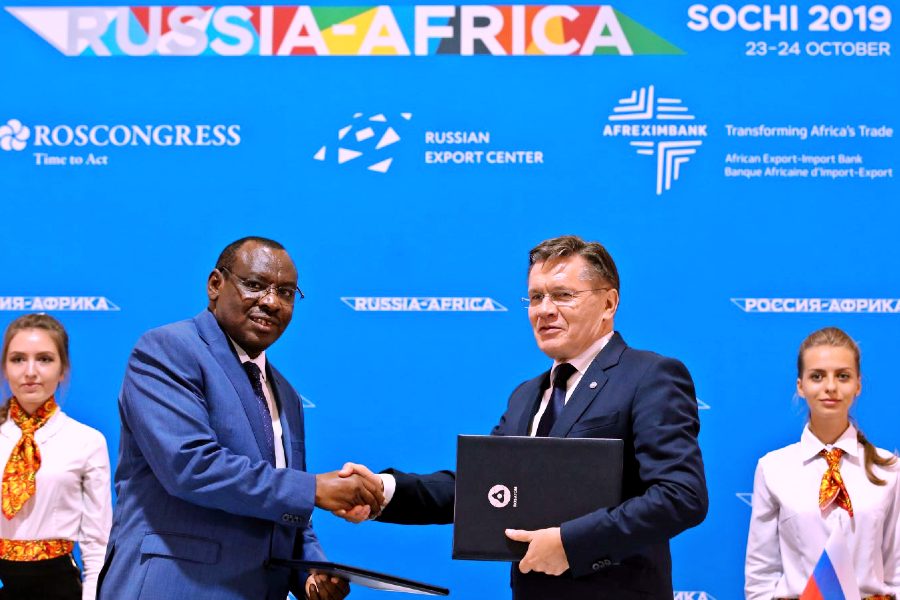 Rather, Russia’s economic engagements in Africa are primarily trade-based. However, this too is modest at just $14 billion. (By comparison, the value of African trade with the EU, China, and the United States is $295 billion, $254 billion, and $65 billion, respectively.) Russian exports to Africa, moreover, are 7 times the level of African exports to Russia, differentiating it from the more balanced trade portfolios of Africa’s major trading partners. African exports to Russia amount to just 0.4 percent of Africa’s total, mainly comprising fresh produce.

Russia primarily exports grains, arms, extractives, and nuclear power to Africa. Yet, over 70 percent of all Russian trade with Africa is concentrated in just four countries—Egypt, Algeria, Morocco, and South Africa.

At the Sochi Summit in 2019, Russian President Vladimir Putin pledged to double the level of Russian trade with Africa in five years. Instead, it has declined each year since 2018, dropping by 30 percent in aggregate. By comparison, Russian trade globally had returned to its pre-pandemic levels by 2021. This illustrates a Russian pattern of overpromising and underdelivering when it comes to its economic engagements in Africa.

It’s the Geopolitics that Matter Anyway

Russia’s modest economic engagement in Africa may not matter that much to Moscow, in the end. Russia’s real motivations for engaging Africa are to advance its geostrategic interests—securing a foothold in the Mediterranean on NATO’s southern border, displacing Western influence, and normalizing Russia’s worldview. In other words, Africa is a means to Russia’s larger strategic ends.

“With 54 votes in the UN General Assembly, Africa provides an attractive target for validation of Russia’s … violations of international law.”

While Moscow welcomes increased trade opportunities with Africa, it is the political benefits that are most compelling. With 54 votes in the UN General Assembly, Africa provides an attractive target for validation of Russia’s military aggression and norms-challenging violations of international law.

Besides, Russia gains most influence in Africa through the unconventional, asymmetric tools it employs—elite cooption, disinformation, election interference, deployment of the paramilitary Wagner Group, and arms for resources deals.

The dollar values of Russia’s economic engagement in Africa are less important than Moscow being able to claim that it maintains vibrant ties with a wide circle of countries despite its international isolation.

Consequently, Russia can be expected to actively tout its economic engagements in Africa—both substantive and trifling.

Most substantively, Africa depends on Russia for 30 percent of its grain supplies. Nearly all of this (95 percent) is wheat (11.9 MT), with a value of $3.3 billion. 80 percent of these wheat exports go to North Africa (Algeria, Egypt, Libya, Morocco, and Tunisia), as well as Nigeria, Ethiopia, Sudan, and South Africa. Africa currently relies on imports for 63 percent of its wheat needs, a percentage that is expected to increase as Africa’s population grows.

Given the food price shock caused by Russia’s disruption to their supply, a key question will be whether these African countries will again allow themselves to become so reliant on a single supplier.

Russia is also the leading arms seller to Africa, controlling half the market. While Russian arms are sold to 14 African countries, Algeria, Egypt, and Angola encompass 94 percent of the value of arms sales in the region.

Russia has simultaneously hyped its interest in investing in African oil and gas. However, most of these projects have failed to materialize. This has led some African analysts to suggest that Russia’s real aim is to prevent African oil and gas from reaching the global market—and cutting into Russia’s market share.

Russia similarly promotes its construction of nuclear power plants on the continent. In 2020, Russia’s State Atomic Energy Corporation, Rosatom, arranged for a $25 billion loan to begin construction of Egypt’s first nuclear power plant, a 4800 MW facility in El Dabaa. The total price tag for the plant is $60 billion. Rosatom has signed cooperative agreements with an additional 17 African governments, including Ethiopia, Nigeria, Rwanda, and Zambia. Given their costs, these nuclear deals are not seen as viable for most African countries. However, the enormous expenditures of these projects create ample opportunities for graft, generating political incentives for well-placed Kremlin and African government officials.

Russia can be counted on to push its economic ties to Africa, even if these are modest. Where will Russia target? At the top of the list is North Africa, given this region’s geostrategic significance to Moscow.

Another priority will be influential African countries that Moscow feels can be pulled into its orbit. These include Ethiopia, South Africa, Nigeria, Senegal, the Democratic Republic of the Congo, and Uganda.

Ethiopia, for example, is in Moscow’s sights as Russia attempts to leverage Western criticism of alleged Ethiopian human rights abuses from the conflict in Tigray. With Ethiopia’s imperative to rebuild, external investment will be vital, though—something with which the Russians cannot help. 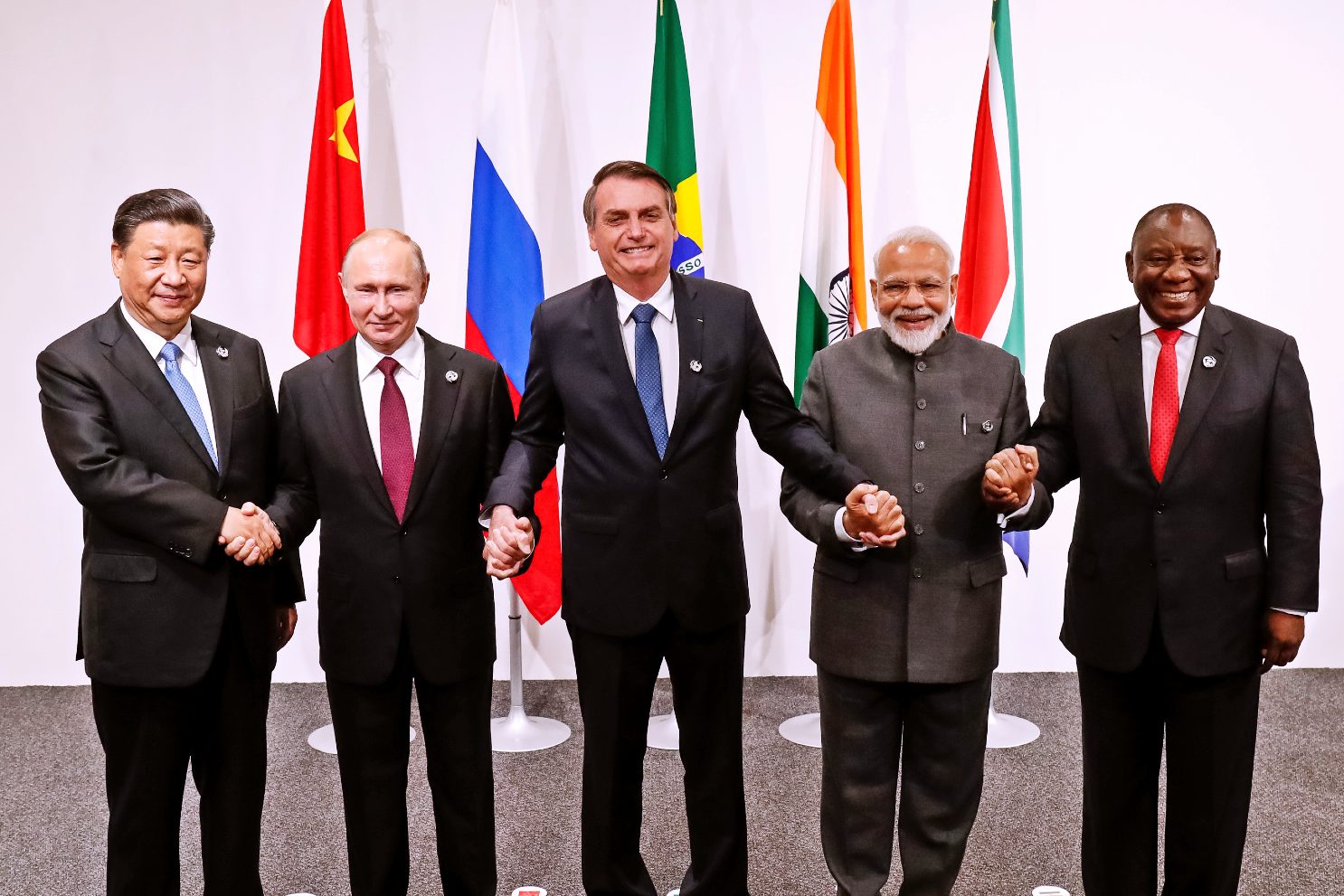 The leaders of the BRICS nations. (Photo: Alan Santos/PR)

Russia, likewise, will attempt to deepen its ties with fellow BRICS member, South Africa. The South African government has bent over backwards to characterize the war in Ukraine on Moscow’s terms. Perceived political benefits for deeper links may lead to heightened trumpeting of Russian economic activity in South Africa, even if not economically rational. Meanwhile, the top five sources of FDI in South Africa all come from the West.

In Uganda, the government has agreed to swap Russian military and propaganda aid for injecting Russian messaging regarding its war in Ukraine and other global issues into Ugandan state television.

While Russia’s economic promises in Africa ring hollow, the political incentives for Russia and some African governments for engagement run strong. So, even though Russia offers little of substance to Africa economically, we can expect to hear more of it.

This article first appeared on ispionline.it as part of an ISPI dossier, Into Africa: How Russia is Trying to Win the Hearts and Minds of the Continent.

More on:    Russia in Africa