Struggles over the trajectory of Burkina Faso’s transition highlight four underlying issues that have fueled the crisis and which will shape the course of democratization in the country. 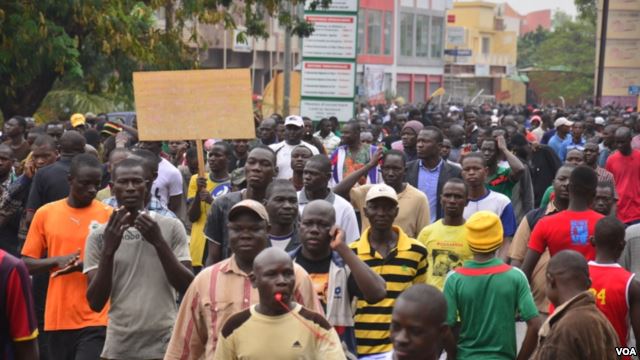 Spontaneous protests by hundreds of thousands of Burkinabé following moves by parliament in October 2014 to amend the constitution to extend President Blaise Compaoré’s 27-year rule triggered a rapid and unexpected exit from power for the longtime leader. Subsequent struggles over the trajectory of Burkina Faso’s transition highlight four underlying issues that have fueled the crisis and which will shape the country’s prospects for democracy.

First, is the role of the military in politics, in particular the Presidential Guard. This issue is at the heart of the current struggle over Burkina Faso’s political transition. Civil society groups and some political parties have been calling for the dissolution of the Presidential Security Regiment (RSP), a 1,200-strong elite force dedicated to protecting the ousted president following the civilian uprising. The RSP, as is the case in other African countries, is considerably better equipped, trained and supervised than the rest of Burkina Faso’s military. They have also played an active political role in the government’s prioritization and policymaking – a role that the RSP is reluctant to forego.

Second, the crisis reflects a deeply-ingrained culture of largely peaceful social and political protest among the Burkinabé dating back to the 1960’s. Six years into independence in 1966 trade unions organized massive strikes to protest then President Maurice Yaméogo’s austerity budget. When the President failed to respond to their demands, the unions called for then army chief of staff, Col. Sangoulé Lamizana, to take over – marking the country’s first coup. Burkina Faso’s culture of organized political protests, mainly led by powerful trade unions and the youth, continued through the 1970s and 1980s leading to the collapse of three successive governments in 1979, 1980 and the bloodless coup in 1983 that brought charismatic leader, Captain Thomas Sankara to power with the backing of civilian youth. Blaise Compaoré, Sankara’s close friend, ousted his former comrade in a coup in 1987. Once in power, Compaoré was forced on several occasions to concede demands in the face of massive demonstrations.

Third is the demand for justice and accountability. Prior to the 2014 protests the most serious challenge to Compaoré’s rule came in 1999 when protestors demanded accountability for the murder of popular journalist Norbert Zongo whose death many Burkinabé blame on the government. Compaoré diffused the protests by instituting an independent commission of inquiry into the journalist’s death. Similarly, in 2011 mass demonstrations erupted across the country after the suspicious death in police custody of another civil society activist, student leader, Justin Zongo (no relation to the slain journalist). Those demonstrations broadened to include grievances about the poor state of the country’s economy and merged with mutinies in several military units. To diffuse them, Compaoré offered food subsidies and increased salaries for the civil service and the military.

The demand for accountability and justice extends back to the death of Thomas Sankara, the man credited with giving Burkina Faso its name, meaning ‘the land of incorruptible people.’ Sankara is also remembered for promoting education, poverty reduction and self-reliance – and remains a source of inspiration for many youth. Many Burkinabé still hold Compaoré responsible for Sankara’s death, a view that has animated numerous Burkina Faso protests.

In the current transition struggle, civil society leaders codified the demand for justice by including in the Draft Transitional Charter a provision for the establishment of a National Reconciliation and Reforms Commission. This Commission will investigate the causes of human rights violations in Burkina Faso with a view to recommending institutional as well as social measures to reconcile communities.

The fourth consideration is the changing expectations for democracy among Burkinabé, especially youth. A key theme of Burkina Faso’s protests has been the demand for greater checks on government power. In 1999, protestors succeeded in pushing through a resolution limiting presidential terms, one of the first successful attempts in Africa at instituting term limits. It is the attempt to overturn this constitutional provision that led to Compaoré’s ouster in the 2014 crisis. The demand for accountable governance is reflected by the insistence by civil society leaders that civilians, not the military, should lead the transition. Civil society’s continued activism in the transition period is an outcome of Burkina Faso’s ‘incomplete democratization.’ They realize that past efforts at reform have been hijacked by wily military leaders unwilling to relinquish the reins of power. Informed by experiences elsewhere on the continent and greater access to information and communications technology, civil society leaders are determined to remain engaged in the political process so that the interests of the society at large are represented in whatever agreement is reached.

Given Burkina Faso’s long history with a politicized military, organized protest, an unmitigated desire to reconcile the past, and a demand for political and institutional reforms, the country clearly stands at a crossroads. How these competing tensions are navigated will shape Burkina Faso’s prospects for democracy and stability for years to come.