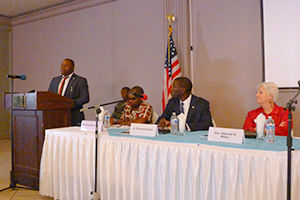 An Africa Center academic outreach visit to Liberia included in-depth presentations on the frequently distrustful relationship between the news media and security institutions, as well as the media’s role in security sector reform.

The often strained relationship between the media and national security institutions such as the military is as old as the foundations of the modern state, and African countries are no exception. The reason typically cited is that, like most bureaucracies, the security services prefer to operate behind closed doors—a preference heightened by the need to prevent potential enemies from learning harmful information. The press, n the other hand, responds to citizens’ demand for information and accountability, especially in the case of institutions as powerful and potentially dangerous as the security services.

Prof. Thomas Dempsey, the Africa Center Chair for National Security Studies and a formerly U.S. military attaché in Liberia, explained that the relationship between the media and security sector requires careful and constant balancing.

“This delicate relationship is a domain in public affairs that always needs to be negotiated and defined in a constructive way as part of the wider effort to implement institutional and political reforms, especially in the Liberian context,” he told participants.

“Liberia in many ways is a unique case,” Prof. Dempsey said, “because a strategic decision was made to disband the army and rebuild it anew to reflect a fundamentally new vision of what Liberia should look like after decades of war and conflict.”

“One of the most important lessons from this experience is that security sector reform, as well as the management of national security in general, should be an integral part of the broader processes and philosophy of political, social and institutional change,” he continued.

Prof. Dempsey in his remarks also stressed the need for media and national security professionals to understand each other’s culture and roles in order to improve their relationship.

“The Liberian model shows that the relationship, although tense, can be managed in healthy and constructive ways that stay true to the new principles that Liberians have fashioned to take their country forward after so much strife,” Prof. Dempsey concluded.

“Media professionals have a responsibility to familiarize themselves with the democratic principles that Liberia is trying to apply and advocate for these in not only dealing with the security sector but larger issues as well,” he counselled.

“To be credible, the media needs to hold its professionals to the same standards of accountability, professionalism, human rights, and transparency that it expects of the security sector and government,” he told participants. “There is an implicit assumption in many African contexts that civil-society institutions and activists are necessarily democratic and accountable, and yet this is not always the case.”

“Conversely,” he continued, “democracy, good governance, and human rights are viewed by governments as foreign concepts.” Following that line of reasoning, “those promoting them must therefore be pursuing foreign agendas that might undermine the state.”

Both assumptions, in Mr. Momoh’s view, undermine the process of nation-building in Africa. He argued that the media, as well as broader civil society, must apply democratic values and use democratic methods in their activities. Governments on the other hand should be aware that the concepts of human rights, human dignity, and democracy are intrinsic to African culture and aspirations.

“How else can we explain the fact that African countries, on their own initiative, crafted the African Charter on Human and Peoples Rights, New Partnership for African Development and the African Conference on Democracy, Elections and Good Governance?” he asked.

“What is needed therefore is a shift in attitude, both by media professionals and civil society as a whole, and the government and Liberians seem to be on the right track in as far as this is concerned,” Mr. Momoh concluded.

The spirit of the debates was captured by a Liberian defense official who spoke at the program: “This exercise is perfectly fine … the press and security sector should work hand in hand … we are after all, Liberians and we must be bold in our efforts to build a new society … our constitution demands it, and our citizens expect it.”