Tunisia Crying out for Change

Kais Saied speaks to a crowd in the city of Gafsa on September 7, 2019, ahead of Tunisia’s elections. (Photo: Moneem Sakhri / AFP)

The promise of democracy persists in Tunisia. The October 13 presidential election runoff that saw Kais Saied, a relatively little-known law professor, win a landslide victory (73 percent of the total vote) over Nabil Karoui, a flamboyant media magnate, cements the country’s standing as a bright spot in an otherwise bleak regional landscape marred by authoritarianism, political violence, and war. Indeed, one of the major lessons of the vote is how much electoral politics have normalized. This is the fifth national vote and second presidential election that Tunisia has held since the overthrow of President Zine el-Abidine Ben Ali in January 2011. In all, free and fair elections have been defining characteristics. This is particularly significant this year as several high-profile establishment candidates were running, including Prime Minister Youssef Chahed, Defense Minister Abdelkrim Zbidi, and former interim President Moncef Marzouki.

Now that the election season is over, Tunisia faces the most difficult task of post-election coalition building. The President-elect confronts a fractured political landscape. The October 6 legislative poll produced a divided Parliament, with no party capturing more than 24 percent of the vote. Saied did not run under a political party. Therefore, despite his commanding victory, he will need to build a parliamentary coalition from scratch. He has the support of the largest party in Parliament, Tunisia’s Islamist party Ennahda, which won 52 of the 219 seats. However, this is down from 69 in 2014, and requires that he still expand his coalition to secure the support of a governing majority.

“The spirit of the 2011 Tunisian Spring is alive and kicking.”

Saied will also have to translate his popular mandate into effective policies capable of overcoming the debilitating economic inequalities that led the Tunisian electorate to favor a major departure from the status quo.

This political moment could offer a way for Tunisia to move in a more inclusive and efficient direction that delivers better economic governance and proves that democracy is the best choice to do so. Or it could lead to stagnation, disillusionment, and estrangement between citizens and politics. This, in turn, could open the door for opportunistic authoritarians who promise decisive results.

An Electoral Wave of Discontent

The anti-establishment wave that shook Tunisian politics in the first round of presidential voting on September 15 came 4 days after the death of Ben Ali, the autocrat whose ouster in January 2011 inspired what became known as the Arab Spring. Disenchanted voters turned to outsiders because mainstream parties had taken few steps to address public anger over high unemployment, especially among youth (36 percent), persistent regional inequalities on social welfare measures, and runaway inflation (7 percent) that reached its highest level since 1990.

The grand Islamist-secularist coalition that has ruled Tunisia for the last 8 years may have succeeded in quieting the ideological clashes that roiled politics and threatened the stability of the country, but as this experiment in consensus politics lengthened, its main protagonists seemed more entitled, entrenched, and increasingly tone-deaf to the needs, the fears, and the anxieties of many Tunisians. Even the Islamist Ennahda, which has turned into a powerful and effective political organization since its legalization in 2011, has been gradually bleeding support in regional votes and national polls. By serving as a junior coalition partner in governments populated by members of the old regime, the party could not enact any of its promises to tackle corruption and reduce economic and regional disparities. It also had to endorse traditional economic policies that an appreciable number of Tunisians blame for perpetuating inequities. It had acquiesced in backing the controversial amnesty law for economic crimes, as well as hamstringing the process of transitional justice, all in the name of preserving its tactical alliance with the ruling party, Nidaa Tounès. All of this has dented the party’s revolutionary authority and legitimacy.

In the end, the inability to deliver improved economic and social prospects for a majority of Tunisians eroded support for the whole political establishment. The interim speaker of Parliament, Islamist Abdelatif Mourou (12.9 percent), Defense Minister Abdelkrim Zbidi (10.7 percent), and Prime Minister Youssef Chahed (7.4 percent) all failed to qualify for the second round. (These results also highlighted the fragmentation of the Tunisian electorate.)

Even before the weak showing of the establishment candidates, there were warning signs that Tunisian politics were due for a second reckoning since the 2011 revolution. For several years now, public opinion polls have shown a troubling decline in public trust in political parties and parliament. Protests against marginalization and deteriorating economic conditions have also become a regular occurrence. In the first round of the presidential election, both Kais Saied, who came out on top of the vote with 18.4 percent, and Nabil Karoui, who garnered 15.6 percent, tapped into this pool of resentment, successfully positioning themselves as radical outsiders who would disrupt the political, social, and economic order. 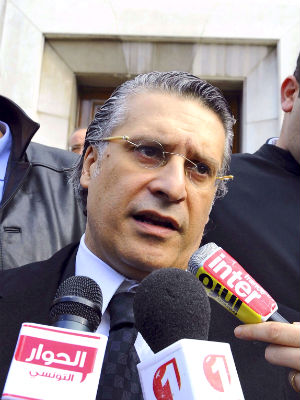 The Karoui phenomenon in particular has frazzled the political establishment for months before the election. Despite hobnobbing with the wheeler-dealer politicians and plutocrats he now regularly assails, he has managed to position himself as an insurgent who will shake up politics. The 55-year-old media mogul’s rise in popularity is firmly anchored in his strategic use of his Nessma TV network to foster his businessman image and philanthropic endeavors. Karoui’s revolutionary credentials are conspicuously meager but his political rhetoric that centers on voters’ economic grievances, coupled with his self-aggrandizing charitable activities, have cemented his position as the self-proclaimed savior of the poor. The millionaire’s stature received a boost when he was arrested over charges of money laundering and tax evasion only few weeks before the September 15 election. The accusations were first brought in 2016 by I Watch, the Tunisian branch of Transparency International. However, the timing of the arrest raised serious concerns about its political motivations. His continuing incarceration also casts doubts on the credibility of the electoral process. Regardless of whether Karoui wins the presidency, his rise to political prominence shows how Tunisian voters who felt they were not doing well economically are ready to pin their hopes on any leader they hope can deliver economic relief. 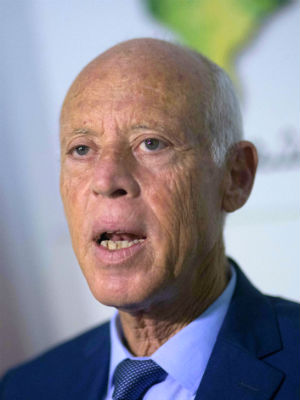 The surprise ascendance of Kais Saied, 61 years old, reveals that there is no common identification in the anti-establishment backlash in Tunisia. Saied is the antithesis of the flamboyant Karoui. He is an atypical candidate, without glamour, political party, or money. He ran a low-key political race with little visible campaign activity, and few thought him to be a serious candidate. The media ignored his campaign even as pre-election poll numbers showed him as a top-tier candidate. Now that his win nabbed him the spotlight, the dissection of Saied and his potential presidency has begun. Several labels are already being tossed around to try to pin him down politically and ideologically. Some suspect him of being an Islamist wolf in sheep’s clothing, while others paint him as a radical Arab nationalist, Marxist, or anarchist. The reality is far more complex and nuanced. Saied’s politics and ideology defy easy categorization. His success lies in managing to build a coalition of educated young people from working-class backgrounds who felt betrayed in their aspirations that the 2011 revolution would bring about dignity, jobs, and social justice.

Saied first made a name for himself between 2012 and 2013 when he appeared on national television to offer expert commentary and critique of Tunisia’s Constituent Assembly. After the 2014 elections, he disappeared from the media radar. Since then, he has waged a local campaign across the country to dismantle the Tunisian centralized model of state and replace it with the principles and practices of direct democracy. His proposals of devolving power to elected local councils and holding elected officials accountable through the potential of recall elections has appealed to disenchanted Islamists, left-wing students, and social activists. The challenge for Saied is how to pursue enactment of his proposals, especially those that call for fundamental political reforms. The fact that he is not affiliated with any political party will make it more difficult for him to forge a new political bloc against the interests that will be represented in the next parliament.

The anti-establishment backlash has been a long time coming. Now that it has arrived, many Tunisians are hopeful that the government will reboot Tunisia’s economy. The future of Tunisia’s democratic stability, moreover, depends on the ability of the incoming elected leadership to substantially improve on the service delivery record of previous governments. The lesson to be drawn from both the Karoui phenomenon, promising to restore a more powerful and efficient presidency, and Kais Saied’s vision of devolving power as a means to make political institutions more democratic and responsive is that Tunisians are crying out for change. That change now appears to be in the offing. 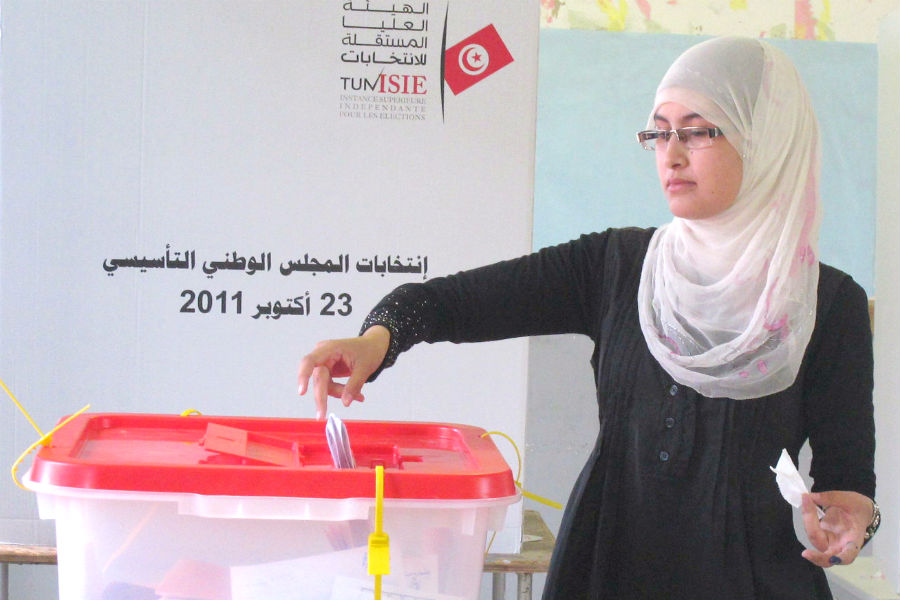 A woman casting a ballot in the 2011 Constituent Assembly election. (Photo: UNDP/Noeman AlSayyad)

The revolutionary ferment of 2011 provided the first opportunity for Tunisia to make politics more in line with Tunisians’ desire for popular representation. At first, the objectives seemed clear (set up a constitution and the institutions needed to build a democracy) and the horizon for reform seemed promising. But the transition quickly got bogged down in debates between those who wanted a clean break with the old regime and those who saw the revolution as more a continuity than a rupture. Proponents of rupture lost the momentum as the battles of ideology stalled the democratic transition and hastened the return of some of the old regime elite. The Islamist-secularist rapprochement helped calm ideological pressures and societal tensions but did little to advance the cause of social justice and economic equality.

Today, Tunisia finds itself at another critical phase in its transition. There are opportunities and pitfalls along the way. The October 6 parliamentary elections produced a fragmented legislature, threatening to make Tunisia harder to govern and incapable of delivering the socioeconomic remedies to inequality that Tunisians demand. Such a scenario risks not only exacerbating citizens’ disaffection and anger but also solidifying the case of those nostalgic for a return to more “efficient” authoritarian rule, dominated by a strong presidency. As the game of post-electoral positioning intensifies, Kais Saied will have to overcome the significant hurdle of building new alliances that redraw the Tunisian political map and help him deliver on the promises that galvanized his supporters, especially the youth, 90 percent of whom voted for him.