Guinea at a Crossroads

After breaking away from decades of autocratic rule, democratic progress in Guinea is now at risk as President Alpha Condé maneuvers to revise the constitution and stay in power for a third term.

Guinea’s 81-year old president, Alpha Condé, who was elected in 2010 and re-elected in 2015, wishes to rewrite the country’s constitution so that he can run for a constitutionally prohibited third presidential term in October 2020. Condé’s government has a history of cracking down on the opposition, delaying local and parliamentary elections, and trying to limit press freedom. More recently, the president has endeavored to subvert institutional barriers to a third term by manipulating Guinea’s political institutions, particularly the constitutional court and the electoral commission.

Overriding these institutions, changing the constitution, and allowing Condé to stay in power for another term would be a deeply problematic development that risks triggering a constitutional crisis and political instability. The Guinean constitution clearly stipulates that presidents are limited to two terms in office, thus creating a peaceful mechanism for political transitions. Guinea’s political institutions support the organization of credible and fair elections where political differences are resolved through the ballot box rather than by decree, repeated constitutional changes, or violent coups and conflict. Abiding by these institutional processes would contribute to the consolidation of democratic norms and practices in the country.

West Africa has a strong historical record of enforcing term limits and discouraging leaders from changing their country’s constitutions.

Condé’s ongoing efforts to remain in office, however, risk derailing Guinea’s nascent democratic transition and sending the country on an unpredictable path of instability. Popular support for democratic institutions in Guinea remains high, and it is far from certain that a new constitution drafted by Condé would pass in a referendum. A 2018 Afrobarometer survey found that 82 percent of Guineans endorse the idea of a two-term limit. Moreover, more than 70 percent disapprove of single party rule, one-man rule, and military rule, calling democracy preferable. In March 2018, Guineans began protesting against the potential of a new constitution—protests that Condé has unsuccessfully tried to ban. Opposition leader Cellou Dalein Diallo, who ran against Condé in the last two presidential elections, was even prevented from attending one round of demonstrations on the dubious ground that police could not ensure his safety.

West Africa has a strong historical record of enforcing term limits and discouraging leaders from changing their country’s constitutions. This has had a positive impact on stability in the region. Of the 18 countries in Africa without term limits, a third suffer from armed conflict. In contrast, just 2 of the 21 countries with term limits are in conflict. Condé’s continued attempts to remain in power, thus, increase the prospects of conflict in Guinea. They also pose a challenge to region’s hard-earned norm of respecting term limits.

After 50 years of repressive authoritarian rule with strong communist influences, Guinea was impoverished and economically isolated when it began its democratic transition in 2010. Condé emerged as the leader of Guinea following a December 2008 military coup, the September 28, 2009, massacre of over 150 protesters and systematic rape of dozens of women by security forces, and the December 2009 assassination attempt of coup leader Moussa Dadis Camara. These events culminated in a political transition that organized the country’s first free and fair multiparty elections in late 2010. Condé won the vote in the second round and assumed office in December 2010. His election sparked hope that Guinea would adopt a path of democratic consolidation and end the repression of opposition figures.

Condé, however, has often ruled in an authoritarian style and systematically worked to weaken the opposition. He has continuously thwarted the opposition’s peaceful protests and failed to hold security forces accountable for the killing of protesters. Since Condé was re-elected in 2015 in a vote marred by irregularities, hopes have dimmed that he would bring about meaningful change. His administration has failed to make substantive progress in improving transparency and accountability and attacked the political institutions intended to provide checks and balances within Guinea’s political system. 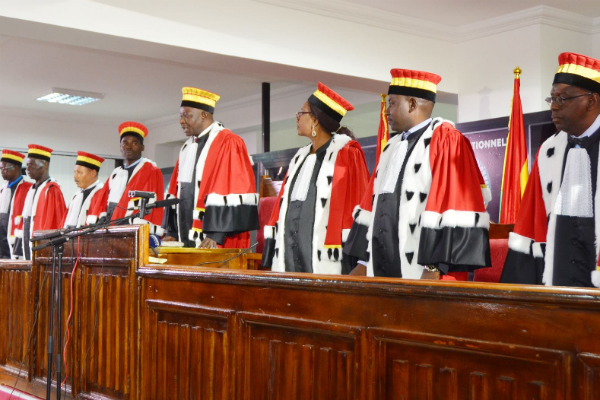 Significantly, in March 2018, Condé began efforts to remove the head of the Constitutional Court, Kéléfa Sall, who had pointedly warned Condé during his 2015 inauguration to “not fall for the siren call of revisionism” and to abide by constitutional term limits. By October 2018, Sall had been removed by his pro-Condé colleagues. (Sall died in July 2019 after an illness.) This came just weeks after the Minister of Justice, Cheick Sako, resigned his position due to his opposition to constitutional changes, noting that he had not been involved in effort to draft the new constitution. He also condemned the government’s failure to provide his ministry with a budget to organize the trial of the suspected perpetrators of the 2009 massacre.

In September 2018, the Condé administration sought to silence opposition by banning protests until further notice, a move that the opposition called illegal and defied three times during the subsequent month. On June 14, 2019, security forces violently repressed additional protests against the proposed constitutional changes, wounding at least 28 people. In July 2019, the National Assembly passed a law that allows police to “fire on any obstacle or threat” and not be subject to judicial prosecution. Human rights groups immediately criticized the new law arguing that it opens the way for further repression of the opposition.

Additional examples of Condé’s growing authoritarian style include shutting down media outlets and arresting opposition politicians. On April 5, 2019, for instance, Faya Millimouno, a leader of the Bloc libéral opposition group was arrested for demanding a date be set for long-delayed parliamentary elections. They were supposed to have been held in February after being delayed from the legally mandated December 2018 date. The elections remain to be scheduled based on the rationale that they cannot be held until the recommendations from an audit of the electoral rolls have been implemented. Since Condé’s party, the Rassemblement du peuple de Guinée (RPG), holds only a slim majority in Parliament, these delays ensure him the votes needed to endorse the proposed constitution and call for a referendum.

Low Institutional Trust and a Lack of Checks and Balances

Given Guinea’s long and dark legacy of authoritarianism, the drafters of the current constitution took careful steps to avoid precisely this form of political maneuvering. The 2010 Constitution (Article 27) explicitly states that “the duration of the president’s term is five years, renewable once. In no circumstances can a person serve more than two terms, consecutive or not.” Moreover, Article 154, which details the modalities for changing the Constitution prohibits any modification to Article 27 by stating “the number and duration of presidential mandates cannot be subject to revision.” As such, the only option for Condé is to write a new constitution, obtain its approval through the Constitutional Court and the National Assembly, and finally pass the text by popular referendum.

Guineans increasingly are losing trust in the institutions charged with ensuring democracy and stability.

Despite the lack of popular support, the opposition is concerned that Condé could still be successful in getting a new constitution approved. They argue that widespread accusations of irregularities and fraud marred Condé’s 2015 re-election, as well as local and parliamentary elections. However, they were forced to accept the results to avoid further instability. Today, the opposition believes Condé would be able to fraudulently win a referendum thanks to his increased control over the CENI, which has been restructured under Condé, to further ensure the ruling party’s electoral dominance. The new CENI only admits parties as members if they participated in the two most recent presidential and legislative elections and if they have at least two seats in parliament. This means that most small parties are excluded and that Condé’s party and its allies effectively control any electoral process, including the potential referendum on constitutional reform.

Similarly, there is little trust in the Guinean security sector, which has long been perceived as bloated and prone to committing systematic human rights abuses. Condé began his first term with a strong commitment to reforming this sector. One of his first steps in office was to retire 4,000 troops from the security services. However, hopes that the security sector would be reformed to protect citizens and democracy rather than the regime appear to have been dashed. Despite an EU-funded security sector reform program aimed at rationalizing the size of the security forces and strengthening human rights standards, improving trust levels among the population has proved to be challenging. In 2018, only 42 percent of Guineans said they trusted the police, down from 47 percent in 2015. On the other hand, trust in the Army remained low, at just 51 percent.

This is especially problematic in the current context because the military has long intervened in Guinean politics. Previous president Lansana Conté took power in military coups, as did Moussa Dadis Camara, in 2008. Condé’s failure to hold the military accountable for the massacre of civilians in September 2009 is another reason popular trust in institutions has eroded. The fact that police have regularly used deadly force against protesters and have not been held accountable contributes to this perception of the security sector. These actions and the long history of military intervention in Guinea’s political arena suggest that opposition to a third term for Condé will continue to be violently repressed.

If Condé succeeds with his plans to change presidential term limits and remain in power, he will join just two other countries in the Economic Community of West African States (ECOWAS) without constitutional term limits: Togo, where the Gnassinbé family has ruled for five decades, and Gambia, where President Adama Barrow says he supports the enactment of such limits after the abuses of the Yahya Jammeh era. Alternatively, opposition leader Cellou Dalein Diallo says Condé could emulate former Congolese president Joseph Kabila by simply delaying presidential elections to extend his term, as he has done for parliament.

External partners who support stability in Guinea should emphasize this message and denounce statements of support, for instance from Russia, for changing the constitution.

ECOWAS has played an important role in removing member state leaders who refuse to step down after they have lost elections. As a result, West Africa has earned distinction on the continent for its upholding of term limit norms. In Côte d’Ivoire in 2010, it supported the removal of Laurent Gbagbo after he lost to opponent Alassane Ouattara. In Gambia in 2017, ECOWAS supported Senegal’s military intervention to remove longtime dictator Jammeh after he lost the presidential election to Barrow. Condé himself played a key part in obtaining Jammeh’s departure. Avoiding an institutional breakdown in Guinea will require ECOWAS leaders and other partners to reinforce the importance of term limits in ensuring stability in the country.

External partners who support stability in Guinea should emphasize this message and denounce statements of support, for instance from Russia, for changing the constitution. The EU has an especially pivotal role to play in this regard.

Guinean citizens, including the opposition, media, and civil society, will undoubtedly continue to use the available political space to have their voices heard and challenge Condé’s assertion that a constitutional change is necessary or even legitimate. In addition to the direct consequences for stability, how this challenge is navigated will have far-reaching implications for shaping Guinea’s governance trajectory—either reasserting the democratic transition or reverting to the lawlessness and inequities that typified the country’s long spell under authoritarianism.