China’s Diplomacy in the Horn—Conflict Mediation as Power Politics

China’s support for ruling parties undermines its ability to be an impartial arbiter of conflict resolution in the Horn of Africa and highlights China’s use of mediation to pursue its geostrategic interests.

“Without the participation of other key stakeholders, genuine peacemaking is practically impossible.”

First, there has been apparently little coordination with existing African-led mediation initiatives. This includes the Office of Olusegun Obasanjo, the African Union’s (AU) High Representative for the Horn of Africa, and African institutions such as the Panel of the Wise—which mediates on behalf of the AU Peace and Security Council. It is also unclear how the new initiative aligns with the Intergovernmental Authority on Development (IGAD), the AU, and international actors like the United Nations. The launch of the Chinese initiative, therefore, has triggered intense speculation and confusion within the region.

The initiative is furthermore seen as tilted in favor of the government of Ethiopia. This is consistent with China’s objectives to strengthen ties with incumbent leaders in the region—many of whom face mounting pressure to step down after having served multiple extra-constitutional terms in office.

The flipside of this incumbency-focused mediation is that it marginalizes political opponents, other significant political actors, and civil society. Without the participation of these other key stakeholders, genuine peacemaking is practically impossible, as noted in the AU’s Mediation Support Handbook. By definition, mediation provides opposing sides a neutral space to resolve their differences through trusted third-party facilitation. Opposition groups and civil society in Ethiopia and elsewhere in the Horn of Africa, however, accuse China of lacking impartiality and seeking to maintain the status quo by providing weapons and economic aid to governments in the region engaged in conflict. 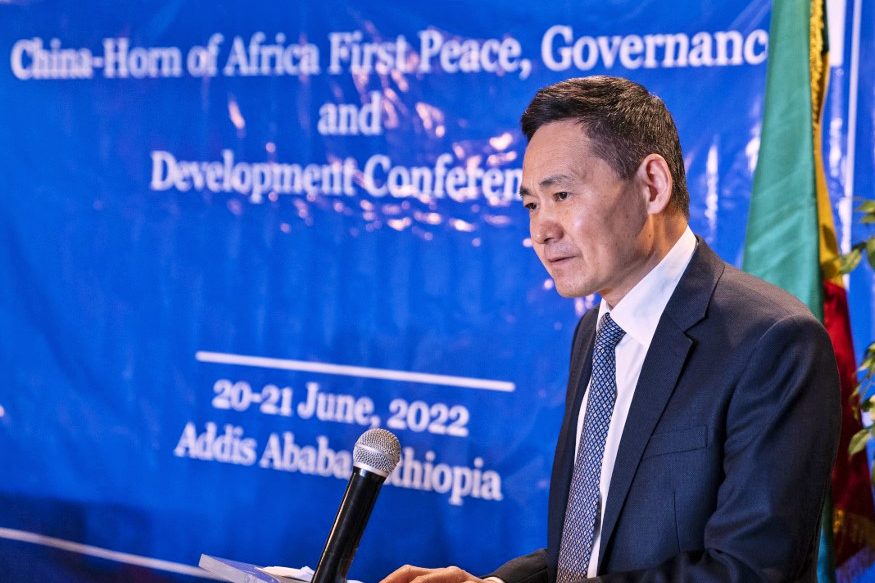 Not engaging all parties also avoids discussing the core issues in the region’s complex conflicts. Xue Bing acknowledged as much following the Chinese-led peace conference for the Horn of Africa held in June 2022, noting that the talks neither discussed a specific conflict nor mediation “as nobody raised the issue.”

These shortcomings in China’s mediation approach in the Horn raise questions about what this initiative is really about. Judging from Chinese state-owned media reporting and leadership statements, China’s Horn initiative is at least partly aimed at displacing Western diplomacy in the region.

The initiative took off in earnest with the June 2022 peace conference co-hosted by Ethiopia and Kenya and attended by senior leaders from Djibouti, Somalia, South Sudan, Sudan, and Uganda. The conference laid out an ambitious program including an invitation to China to assist in conflict resolution and a commitment by countries to meet regularly to address crises.

“The timing of China’s pledge of support to Abiy appears to be aimed at exploiting this tension with the West.”

The initiative was launched as Abiy faced mounting pressure from his Western partners over alleged human rights violations committed by Ethiopian forces in Tigray, including the suspension of Ethiopia in January 2022 from the Africa Growth and Opportunity Act (AGOA), which provides African countries duty-free access to U.S. markets.

The timing of China’s pledge of support to Abiy appears to be aimed at exploiting this tension with the West. China is pursuing a similar strategy of protecting incumbent regimes in South Sudan and Sudan, where it opposes sanctions and what it calls “foreign intervention.” China also strongly backs Eritrea which faces Western sanctions and whose troops are fighting alongside Ethiopian forces. 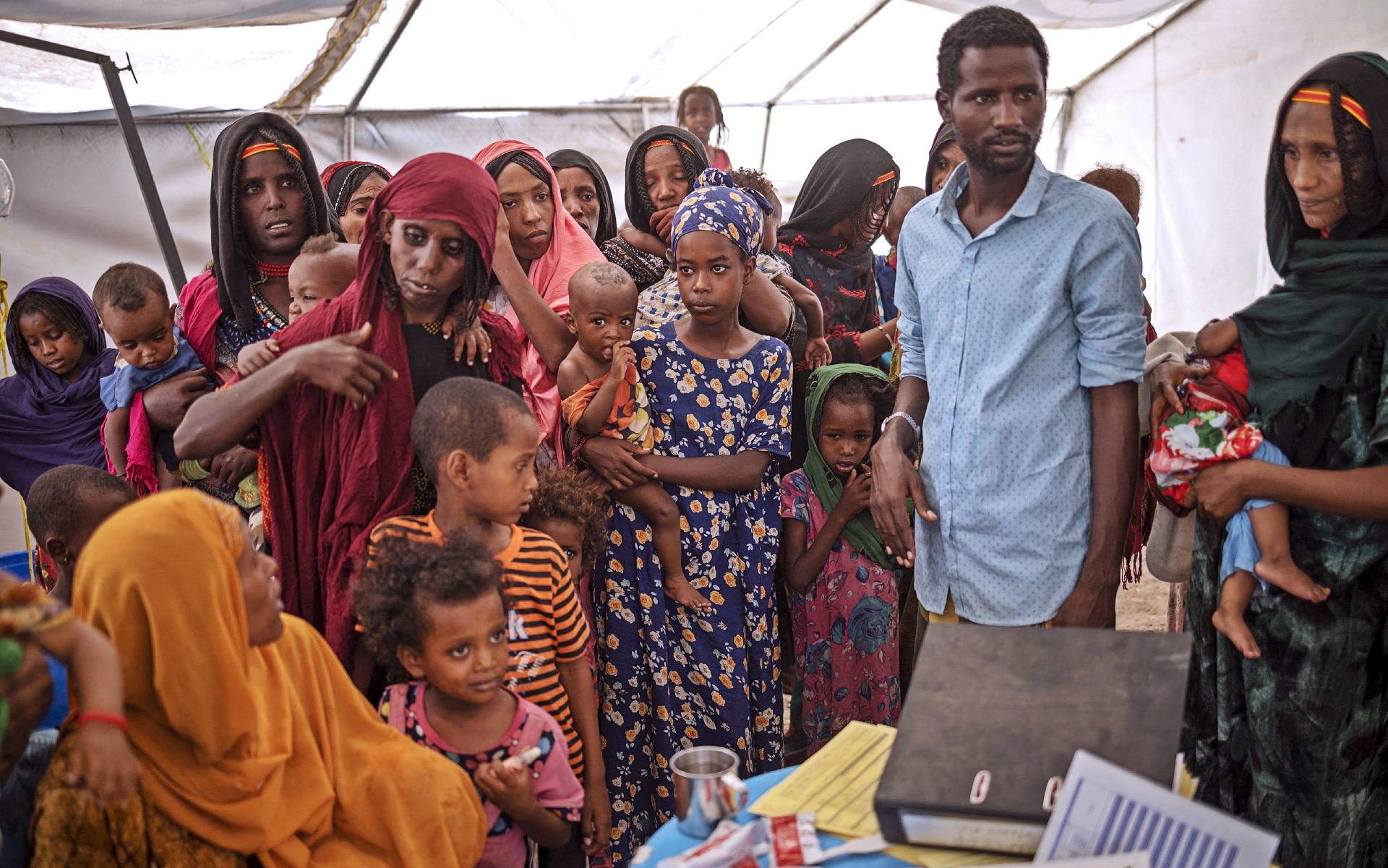 Women and children from the internally displaced persons camp of Guyah, Ethiopia wait to have their children screened by health personnel. (Photo: Michele Spatari/AFP)

China’s special envoy to the Horn joins a growing list of Chinese diplomats—six in total—dealing with high-level African issues. China’s mediation activities have grown in tandem with its One Belt One Road strategy (known internationally as Belt and Road Initiative (BRI)) launched in 2012.

China says its intraregional dialogue on mediation is focused on “the triple challenges of security, development, and governance” based on “Chinese wisdom” (Zhongguo de zhihui; 中国的智慧). This Communist Party of China term refers to the promotion of Chinese governance norms and practices as alternatives to Western liberal democracy.

While this approach is often linked to China’s ostensible policy of “non-interference”, in practice this translates into a deep commitment to preserving China’s ties with ruling regimes to the point of not taking stances against them even when they engage in gross misconduct. Yet mediators have a moral duty to do so, as shown by the examples of renowned peace brokers like South Africa’s Nelson Mandela, Tanzania’s Julius Nyerere, and Botswana’s Ketumile Masire.

China’s focus on regime preservation reflects its own preoccupation with “stability preservation” (weiwen, 维稳)—its guiding governance concept at home. The pursuit of weiwen abroad explains why non-regime stakeholders do not trust Chinese mediation. China’s Horn initiative, thus, risks being not only ineffective but counterproductive.

Protecting BRI interests is another priority of China’s Horn initiative. Ethiopia hosts 400 Chinese manufacturing and construction projects worth over $4 billion as well as hundreds of contractors at the Grand Ethiopian Renaissance Dam, Africa’s largest. A mediated settlement would benefit China by reducing violence that could disrupt its large portfolio.

At the outset of the conflict in Tigray in November 2020, China worked with the Ethiopian military to evacuate 600 Chinese citizens from the massive Wolkaiyt sugar refinery near the frontlines and a water project near Mekelle run by the Gezhouba Group, one of China’s largest energy state-owned enterprises. In March 2021, China and Ethiopia established a “security safeguarding mechanism” to protect Chinese investments in Ethiopia.

China’s Horn initiative stands in contrast to its engagement in South Sudan in 2013, which was distinctive for its constructiveness. China was motivated to engage in South Sudan given its investments in oil pipelines, wells, and export infrastructure. Working closely with the ongoing mediation initiated by the late U.S. envoy, Princeton Lyman, China’s then Special Representative on African Affairs Zhong Jianhua skillfully brought together key warring factions to the table. Building on the two diplomats’ close personal and professional relationship, this was one instance where China came close to playing a mediator role in the classical sense. Not only was it willing to talk to all sides but it also supported a larger multilateral process. 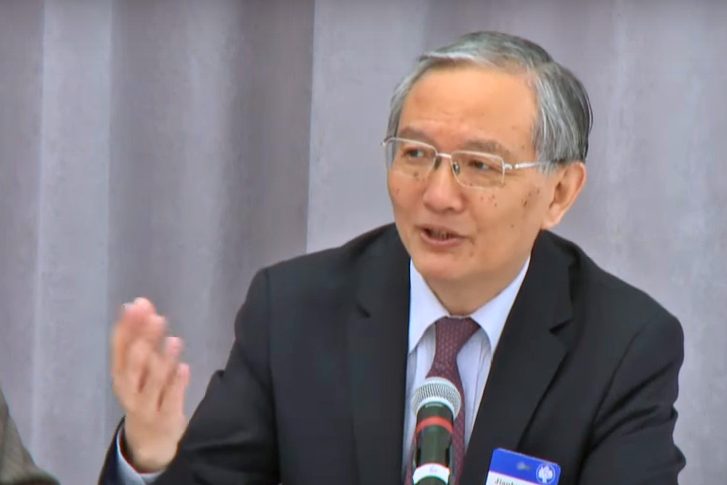 Zhong Jianhua at a conference on security cooperation in Africa. (Image: USIP)

China does not seem enthusiastic about working with Western envoys or becoming part of existing multilateral initiatives in its latest initiative, however. China has justified this stance by saying that Abiy and other leaders are “fed up with the foreign intervention, the preaching from Western countries,” and that countries in the region say “China respects us, treats us as equals, and so they want to see China playing [a] more active [and] constructive role.” This justification of China’s role is consistent with the regime-centric nature of its efforts.

In practical terms, this posture seems intended to ingratiate China to Abiy while advancing China’s geostrategic posture in the region. Ethiopia is one of China’s closest military and economic partners in Africa. Moreover, Ethiopia’s $13.7 billion debt to Chinese lenders raises its profile in Chinese calculations. Tigray supporters point to this economic leverage as further evidence of China’s unfitness to mediate.

Understanding the economic interests at stake in any conflict is a critical consideration for achieving peace. Otherwise, economic investments can reinforce pre-existing patterns of inequality. “One way out is to address economic inequality as part of any peace negotiation and ensure that economic development is organic to the peace process,” says Kwezi Mngqibisa who worked on the Burundi peace process under former South African President, Nelson Mandela. “Mandela was adamant that donor pledges moved hand-in-hand with the peace process and that development priorities were identified by the parties in the context of the talks. It was a lesson that other mediators borrowed.”

China’s approach reveals gaps when examined against African mediation principles. The 12 mediation guidelines in the AU Mediation Handbook include impartiality, inclusion of all significant political actors, involvement of civil society, a non-threatening venture for all parties, ownership by the parties, and addressing root causes. So far, the “Outlook on Peace and Development in the Horn of Africa” falls short of these requirements—meaning there is need for deeper consultation with African institutions and experts.

“It would be more accurate to look at Xue not as a mediator but as an envoy sent to the region to protect Chinese economic interests.”

There are also differences in content and focus. Professor Gilbert Khadiagala, who advised the AU Panel of the Wise, explains that, first, a credible mediation would have to sound out the other existing mediators to ease its entry into the process, which was not done. Second, China is wary of imposing itself in political conflicts that it has no control over: it would rather sell the BRI packages to all the players without necessarily having an overtly political engagement. Hence, it would be more accurate to look at Xue not as a mediator but as an envoy sent to the region to protect Chinese economic interests.”

Meanwhile, the timing and sequencing of China’s new initiative has not followed African templates. Had Chinese diplomats incorporated lessons from Nelson Mandela and other renowned mediators, then they would have met the TPLF after meeting the government, assessed the readiness of both sides to talk, identified the core issues, and secured a “no objection” from them to mediate. They would have followed up by shuttling between the two sides to prepare the groundwork for direct talks. All this would have been done in close coordination with the AU’s special envoy, Obasanjo.

Why Africans Must be at the Center

China’s approach of strengthening ruling regimes in its Horn initiative means it is not viewed as an impartial actor—breaking a core rule of mediation. China also appears to be using mediation as a means to support its geostrategic interests. Mediation, in contrast, is a process whereby a trusted actor with experience, leverage, intimate knowledge of conflict resolution, and moral suasion brings parties to the table to resolve grievances in a safe environment.

Over the years, African diplomats have demonstrated considerable expertise in building such trust and impartiality, producing a long line of mediators that have tackled some of the most vexing crises on the continent. It will thus be critical for African stakeholders to make their voices heard, bring their knowledge to bear, and take the driver’s seat in any mediation and peacebuilding efforts in the Horn. It is on this basis that they can most constructively invite external actors to contribute.

More on:   China in Africa    External Actors in Africa