The risk of militarization of drone technology in Africa represents a new asymmetric tool that violent nonstate groups may deploy to extend the reach of their coercion, reshaping the African battlefield.

In late 2016, the Islamic State (ISIS) reached an important milestone during the battle to secure the city of Mosul in Northern Iraq. In what is thought to be the first ever recorded use by violent nonstate actors in theatre, ISIS deployed a weaponized drone or Unmanned Aerial System (UAS). The device, with a range of about a mile and a half, had been built and loaded with explosives and detonated in a densely populated urban battlefield. The impact was both physical and psychological. Civilians found themselves trapped deeper in the city while Kurdish Peshmerga and Shi’ite militias joining Iraqi government troops, struggled to regain control.

Since that time, the use of UAS by violent nonstate actors has been observed in other conflict settings including Syria, Yemen, and Ukraine.

Expanding Applications of Drones in Africa

Within Africa, the potential for insurgent groups to emulate such tactics as those observed in Iraq, has received little attention. There has been some focus on Libya with proxy supporters of both the Libyan Arab Armed Forces coalition of militias led by Khalifa Haftar in the east of the country and the Government of National Accord supplying drones for surveillance and long-range strategic strikes. However, it is the recent escalation in hostilities in the Cabo Delgado Province of northern Mozambique that has raised the specter of violent nonstate actors in Africa deploying this technology.

Mozambique’s Interior Minister Amade Miquidade reported that UAS have been deployed by militant Islamist groups in Cabo Delgado Province where a SADC stabilization force has recently been authorized. Mozambique’s armed forces have been battling these militant groups who operate under the name of Ahlu Sunnah Wa Jama’a or Ansar al Sunna since 2017.

“Informal acquisition and enhancement of commercially available or so-called “hobbyist” drones are also a trend Africa may witness more.”

The tensions are rooted in long-established local grievances and form part of the ongoing battle to control an area that is home to Africa’s largest liquefied natural gas pipeline project. During the attacks in late March and early April 2021 that targeted, among other areas, the strategically important town of Palma, Miquidade claimed that the militants used drones to assist in precision targeting.

This aligns with other unverified reports by private security companies operating in the region that small drones have been deployed by armed nonstate actors for surveillance purposes. Jasmine Opperman, a former South African intelligence analyst, observed that “If we look at the ease with which [the insurgents] are getting weapons and mounting attacks on the military, I will never underplay the possibility that they start making use of more technologically advanced capabilities, and with that I include drones.” She added that “If you can bring in cellphones by the hundreds through illegal smuggling routes, what is preventing them from bringing in drones?”

The Mozambican experience mirrors other reports emerging from Africa. In Somalia, private security contractors have described how in the past year the violent extremist group al Shabaab has deployed UAS for surveillance purposes. Although eyewitness accounts are hard to verify, Colonel (ret.) David Peddle, a former military service member in South Africa and the UK with ongoing contact in Somalia, confirmed that armed nonstate actors have been using UAS for surveillance purposes and believes it will only be “a matter of time” before the deployment of “swarms” or clusters of offensive drones in Africa, given their accessibility and relatively low cost.

Libya has also emerged as a technological testing ground for similar aerial assets, supplied by external forces such that UAS are now a mainstay of the Libyan conflict. But informal acquisition and enhancement of commercially available or so-called “hobbyist” drones are also a trend Africa may witness more and more. Across the Bab al Mandab Strait, Yemen has also reported the use of similar aerial systems by Houthi rebels, where they have been deployed as strike platforms to mount attacks against energy installations. 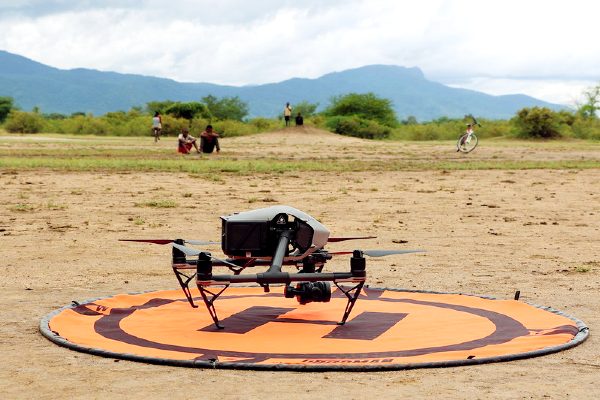 The global commercial drone market is forecast to reach $43 billion by 2024 with South Africa, Nigeria, and Kenya expected to be the biggest players in Africa. In addition to business uses, drones are increasingly being used for humanitarian purposes. Drones also hold much scope for expansion into other areas such as maritime security and border policing operations.

Yet the unintended consequences of commercial or hobbyist drone proliferation and its impact on African security is an area that has attracted little research. The announcement that an EU training mission will train the Mozambican army to use drones to track militants’ movements is testament to a growing drone ecosystem in Africa, with both military and customized commercial UAS sitting alongside hobbyist or shop-bought drones.

The use of UAS represents a new iteration of digital technology. The rapid rollout of mobile- and smartphone technology has seen militants in remote settings such as the deserts of Mali detonate IEDs using mobile phones where in the past they would have relied on trip wires. Smartphone applications used to pilot drones present both an opportunity and a threat. Although drone technology is largely used for positive purposes, the possibility for individuals to build drones with smartphones and open-source software will accelerate, and the results may be destabilizing. In short, drones are likely to be an integral part of future warfare in Africa.

Changing the Nature of Conflict in Africa

To date, most of the research on the use of UAS by violent nonstate actors has been conducted outside of Africa. However, analysts believe the experience in the Middle East where drones have been weaponized “unlocks a genie of sorts, as [ISIS] demonstrated what was possible with a little bit of sinister engineering.” They can also be quickly brought to scale. When Iraqi forces took major parts of Mosul back from ISIS in November 2016, they found an ISIS workshop dedicated to weaponizing drones. Such was the ability to scale up that, in the spring of 2017, there were between 60 and 100 aerial ISIS drone strikes each month across Iraq and Syria.

The experience of the Middle East does not necessarily mean that drones may be weaponized in the same way in Africa. The experience in Libya, for example, suggests that the tactical utility of drones may be limited as a weapon. However, drones are potentially of enormous value for wider intelligence gathering, collection of footage and propaganda materials, and for precision targeting.

Image of a Mozambique coastal area captured by a drone. (Photo: Vasco Santos)

A study of UAS in the Sahel and East Africa  concludes that the ease with which shop-bought or hobbyist drones can be acquired across Africa suggests that indigenous innovation may appear to be more likely than direct technology transfer. Given the growing ecosystem of drone use in Africa, there is a logic to this conclusion.

As a tool which is hard to detect and harder still to shoot down, UAS may offer some utility to violent nonstate actors for surveillance and targeting purposes both on land and at sea. Indeed, during the recent attacks in northern Mozambique, eyewitness accounts described how aerial vehicles were used during the Palma attack. Nevertheless, to date there has not been a drone strike on a major piece of infrastructure such as a hotel or airport in Africa. Arguably, the psychological advantage of threatening to deploy a commercially available hobbyist drone as an instrument of intrusion or a weapon may give violent nonstate actors a degree of leverage over their adversaries as well as expanding their spheres of control.

Expanding drone use in Africa for commercial and humanitarian purposes should lead policymakers to consider the unintended consequences. Mapping the use of drone activity across Africa by violent nonstate actors could be an important tool to ensure that aid programs that rely on humanitarian corridors like those established by UNICEF in Malawi, or emergency response capabilities such as the World Food Program in Mozambique, are not compromised and the benefits of drones undermined.

“Conventional militaries no longer have a monopoly on appropriating technological innovation that will shape the battlefield.”

Such a mapping exercise would also benefit large-scale private or private-public partnerships such as oil and gas refineries, ports and harbors, airports, and military bases, to help them develop technical countermeasures such as defense shields or jamming technologies.

While policymakers in Africa may be unable to easily control the proliferation of commercial drones, there is scope for exploring early warning systems to flag the large consignments of drones procured and delivered to areas of known conflict. Research from Syria and Iraq demonstrates the supply chain of drone acquisition by ISIS. In response, a registration scheme similar to that used for mobile phones may be considered for smaller shop-bought drones that are not mandated to apply for a license.

There may also be scope for considering export control regimes such as the Wassenaar Arrangement, which governs the export of dual-use technologies, and possibly even the Missile Technology Control Regime (MTCR), which was designed to regulate nuclear-capable missiles able to strike from a significant distance. Given the potential for drones to be used as a weapons delivery system, this may have some utility. However, the shortcomings of both agreements are that they are nonbinding and their classifications are considered by some scholars to be rather outdated.

The Berlin Memorandum recommends that these “effective measures” include governments conducting risk assessments to identify vulnerabilities and pre-empt technological developments that may be utilized by terrorist actors, public information campaigns to advocate responsible UAS use, and crisis response mechanisms including sanctions following UAS incidents. Additionally, governments are urged to consider developing tactical countermeasures and technical solutions, while not impeding beneficial and legitimate UAS uses.

Given their growing exposure to the spread of this technology African policymakers should play an active role in shaping future drone policy. This emerging threat demonstrates how conventional militaries no longer have a monopoly on appropriating technological innovation that will shape the battlefield.

Karen Allen is a former BBC Foreign Correspondent and currently a Visiting Fellow in the War Studies Department at King’s College London and a consultant at the Institute for Security Studies in Pretoria, South Africa.

More on:  Irregular and Asymmetric Warfare​