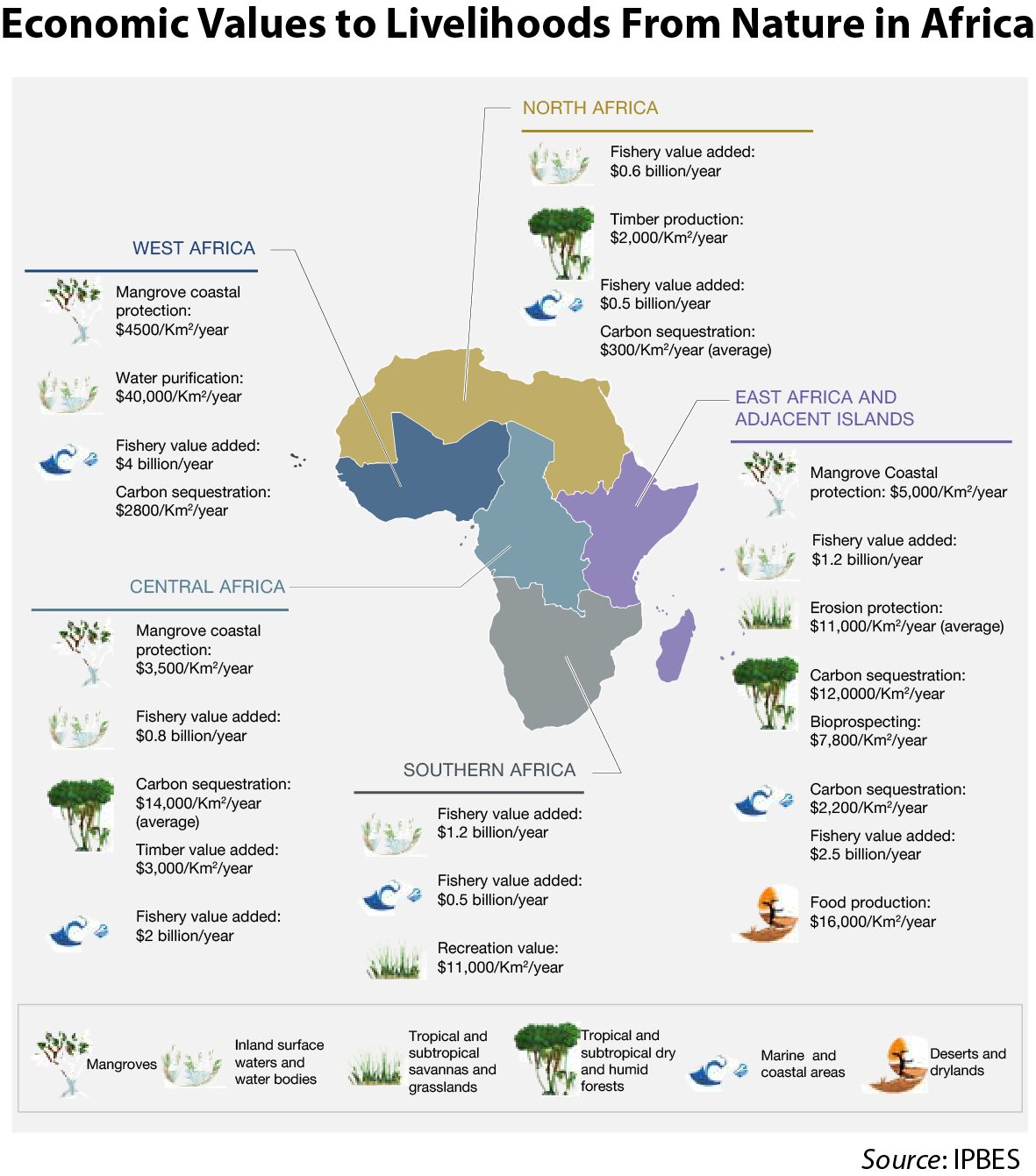 More than 62 percent of Africa’s rural population rely on the continent’s diverse natural ecosystems for their food, water, energy, health, and secure livelihood needs. This biodiversity provides an arsenal of genetic capital beneficial not just to the people living in these ecosystems but to the world.

The continent also has around one-sixth of the world’s remaining forests, including those that comprise the Congo Basin, a 240-million-hectare rainforest straddling 8 African countries and supporting the livelihoods of 80 million people in the region. Often referred to as the world’s second green lung, the Congo Basin absorbs 4 percent of global carbon emissions every year, offsetting more than the entire African continent’s annual emissions.

“The conversion of natural habitat to low yielding cultivated land is the dominant driver of biodiversity loss in Africa.”

According to the Intergovernmental Panel on Climate Change (IPCC), natural forests provide 21 percent of rural household income across 11 African countries and wild-harvested foods (including fisheries), contributing to the health of millions of Africans.

Two marine ecosystems along Africa’s west coast—the Benguela Current in the south-eastern Atlantic and the Canary Current in the north-eastern Atlantic—have enormous societal and economic importance for the adjacent countries as well as for the global food supply. They, along with the eastern parts of the Pacific Ocean, contain a continuous upwelling of nutrient-rich deep water which gives rise to extremely high biological productivity that provides 20 percent of the world’s fish harvest.

Second only to tropical rainforests when it comes to biodiversity, coral reefs provide valuable resources for coastal communities and 25 percent of all marine life. Over half a billion people globally depend on coral reef ecosystems for food, income from tourism and fisheries, and coastal protection. The coral reef systems that stretch from Egypt all the way down to South Africa provide millions of Africans a source of food and coastal protection.

Drivers and Accelerators of Biodiversity Loss

Africa’s rich biodiversity is under duress with ongoing losses of species and habitat. According to the International Union for the Conservation of Nature (IUCN), over 6,400 animals and 3,100 plants in Africa are at risk of extinction. Surveys of Africa’s bird populations show declines over the past 25 years, a pattern likely matched by fish and plant populations, though data is limited. Overall, populations of vertebrate species in Africa are estimated to have declined by 39 percent since 1970.

Africa hosts 9 of the world’s 36 biodiversity hotspots (defined as regions with more than 1,500 endemic plant species which have lost at least 70 percent of their primary native vegetation). On the island of Madagascar, for example, 82 percent of its plants and 90 percent of its animals are endemic and together create irreplaceable ecosystems. Scientists believe overexploitation alone threatens 62 percent of vertebrates on this ecologically unique island while unsustainable agriculture threatens 57 percent. Together, they endanger 90 percent of all Madagascar’s plant species. Of the 40,283 plant species known to be used by humans worldwide for medicine, food, and mitigation against climate change, 5 percent (1,916 in total) are found in Madagascar. Of these, 1,596 are endemic. 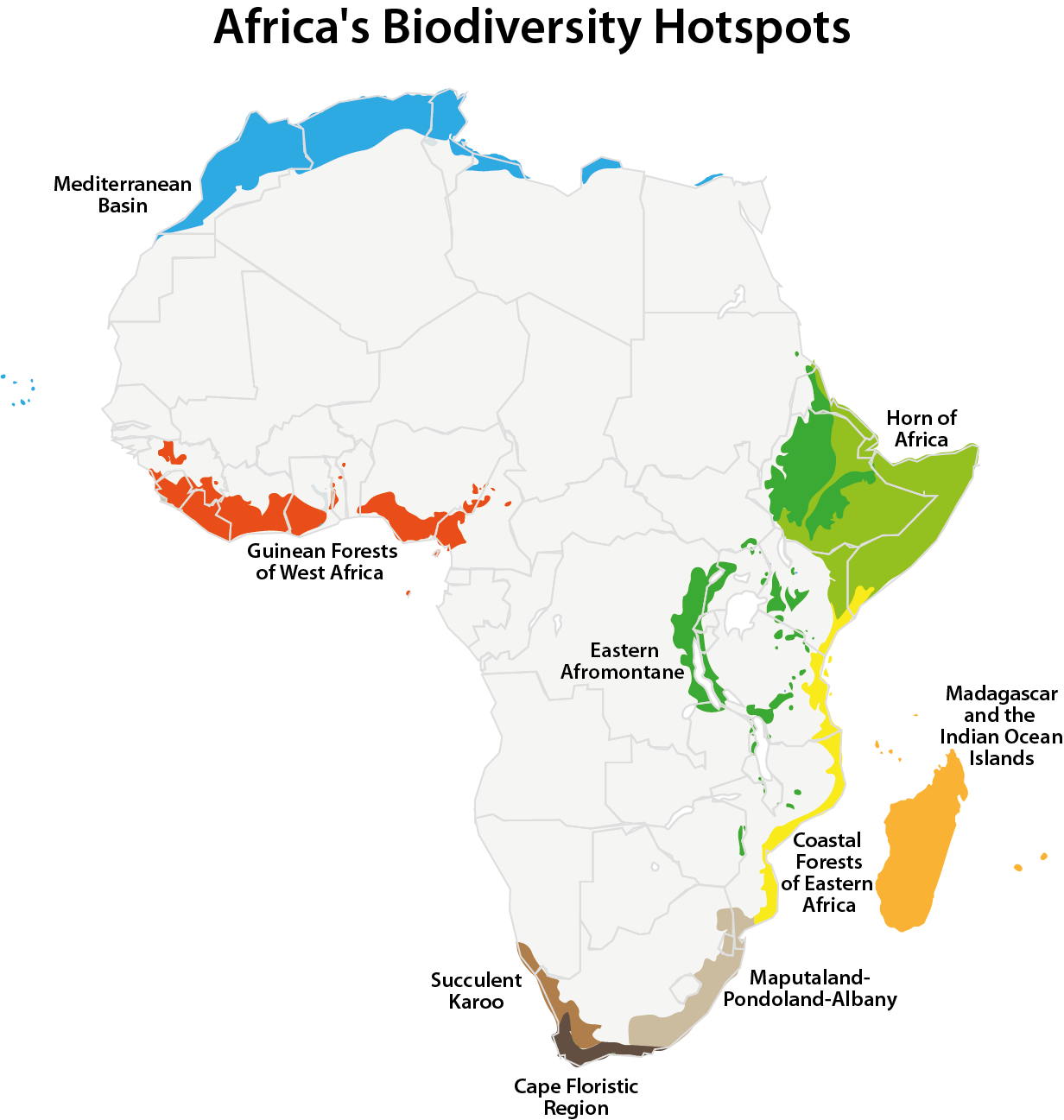 Destructive farming, mining, logging, fishing practices are the primary drivers behind the decline in ecosystems and biodiversity loss in Africa.

Some 20 percent of Africa’s land surface (6.6 million km2) is estimated to be degraded because of soil erosion, salinization, pollution, and loss of vegetation or soil fertility. The Congo Basin, for example, is losing an estimated 500,000 to 1.2 million hectares of tropical rainforest every year. This has resulted in roughly a 30-percent decline in tree cover across large stretches of the African tropics since 2001.

Among wildlife, an IUCN assessment of five taxonomic groups (mammals, birds, amphibians, corals, and cycads) found that all have deteriorated steadily between 1993 and 2016.

Africa’s blue economy—comprising ports, fisheries, tourism, and other coastal economic activity—is conservatively projected to grow from $296 billion in 2018 to $405 billion by 2030. However, repeated mass coral bleaching events in East Africa and the poleward migration of marine life from their habitats could result in a 30-percent contraction of this sector, leading to lost livelihoods for millions of African fishers. 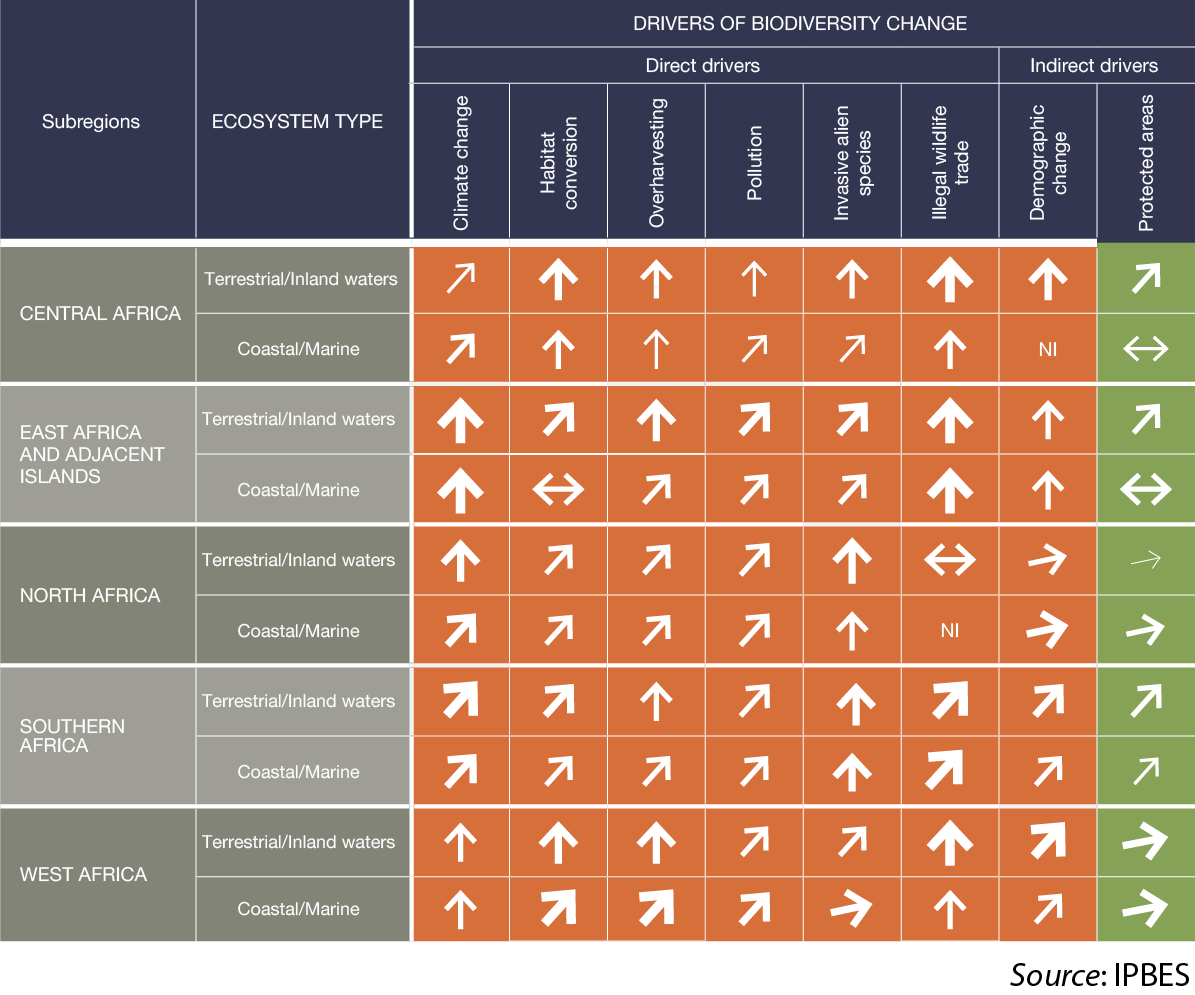 Although it is not the primary driver, climate change is exacerbating human-driven biodiversity losses. At global warming levels (GWL) above 1.5°C:

Above 2°C GWL, the risk of sudden and severe biodiversity losses becomes widespread for much of Africa, including: 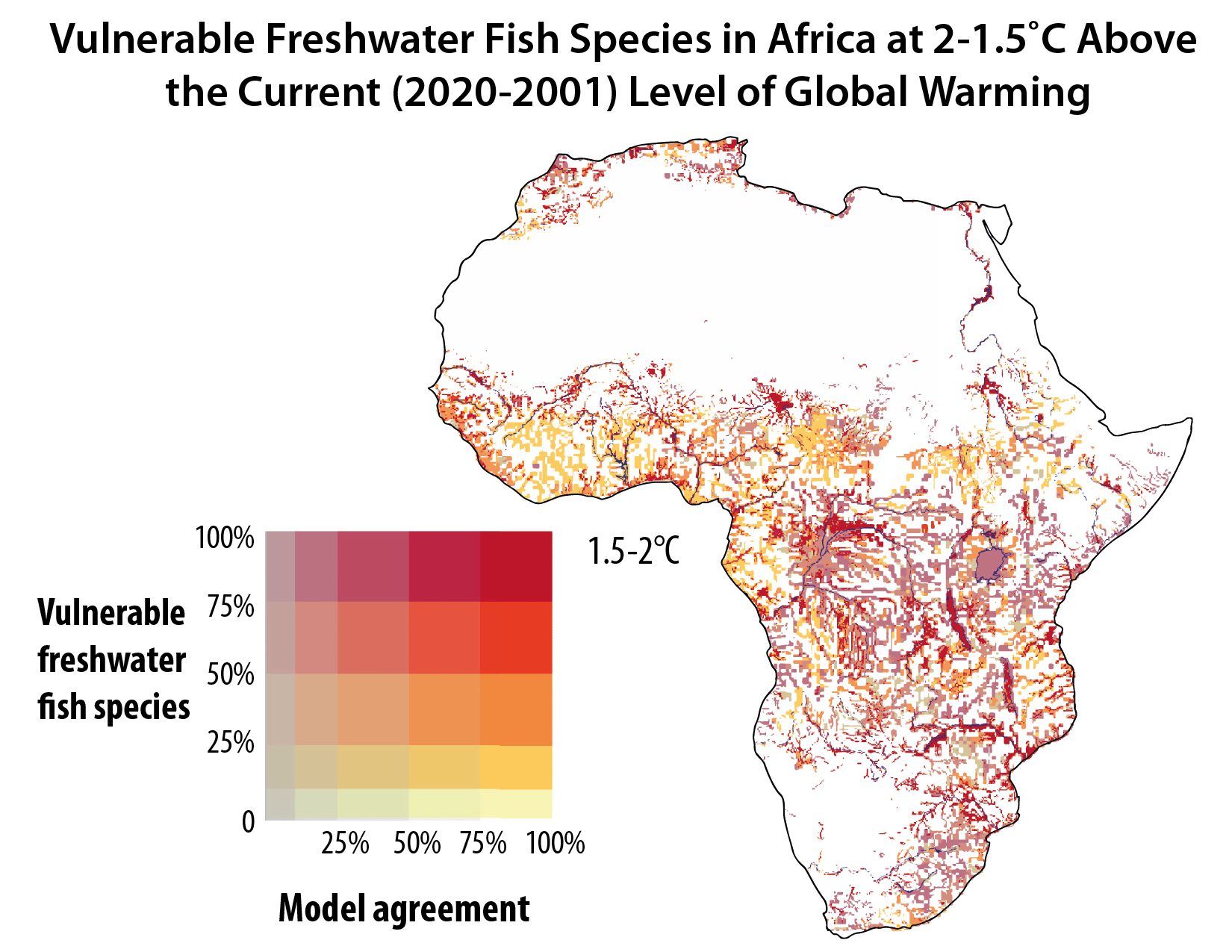 Africa’s marine biodiversity loss is also accelerated by global warming. The ocean absorbs around 23 percent of the annual CO2 emissions to the atmosphere. Rising CO2 concentration leads to ocean acidification, endangering fisheries and aquaculture and weakening coral reefs, which affects coastal protection. According to the IPCC, this has resulted in a 20-percent reduction in phytoplankton biomass in the western Indian Ocean since the 1960s (potentially leading to reduced tuna catches). This is expected to have severe impacts on an estimated 30 estuarine and marine fish species (including anchovy, sardine, hake, and rock lobster).

Coastal ecosystems, which include mangroves, seagrasses, and coral reefs, critically support nursery habitats for fish, sequester carbon, and provide shoreline protection. An acre of mangroves can store 5 to 10 times as much carbon as an acre of rainforest. Their loss will impact not just African coastal communities but the entire planet.

The conversion of natural habitat to low yielding cultivated land is the dominant driver of biodiversity loss in Africa. In arid and semi-arid regions, biodiversity losses and ecosystem degradation affects the quality of the soil and vegetation impacting agricultural output. The loss of grass-dominated biomes further reduces rangeland, impacting animal husbandry. Growing land pressure is contributing to population displacements and the escalation of farmer-herder conflicts.

Under changing ocean conditions, some fishing exclusion zones and seasonal restrictions may no longer serve their purpose. As fish stocks shift from one zone to another, fishers may be tempted to venture into these marine protected areas, potentially harming the vulnerable resources enclosed within them. Illegal, unreported, and unregulated (IUU) fishing may also occur as stocks shift across national boundaries and into the fishing zones of other countries. There have already been a few instances of such conflicts between local and foreign fishermen in West Africa.

Tropical forest edges are a major launching pad for novel human viruses. These edges arise as humans build roads or clear forests for timber production and agriculture. Humans and their livestock are more likely to contact wildlife when more than 25 percent of the original forest cover is lost. Hunting, transport, farming, and trade of wildlife for food, pets, and traditional medicine compound these routes of transmission and closely track deforestation. For example, bats are the probable reservoirs of Ebola, Nipah, SARS, and the virus behind COVID-19. The WHO found there has been a 63-percent increase in the number of zoonotic outbreaks in Africa (particularly in the DRC and Nigeria) in the decade from 2012-2022 compared to 2001-2011.

While many species have already been lost, it is not too late to improve the future for many endangered plants and animals. Initiatives focused on biodiverse-friendly entrepreneurship, education, and sustainable agriculture schemes would help protect Africa’s biodiversity and its citizens. Alongside these citizen-focused initiatives, African governments and their international partners can also focus on biodiverse-friendly governance.

“Bridging the gap between frameworks and actual implementation—by harnessing the power and knowledge of local communities, civil society, and law enforcement—would see results beneficial to biodiversity.”

Uphold and enforce existing conventions and laws. Many African countries are already party to various regional and international agreements against trafficking in natural resources such as wildlife and timber. Bridging the gap between frameworks and actual implementation—by harnessing the power and knowledge of local communities, civil society, and law enforcement—would see results beneficial to biodiversity and the communities that directly rely on them.

Expand the use of carbon credits to facilitate the preservation of ecosystems. Gabon issued carbon credits to help protect its rainforest in October 2022—the largest ever and potentially worth more than $2 billion. The use of such carbon credits and other conservation-based revenue schemes can help protect natural preserves while generating income for local communities. With citizen oversight, these funds could be a source of investment in economic diversification and sustainable livelihoods.

Scale up data collection to inform policy making. Despite impressive recent developments to track trade in biodiversity products and biodiversity loss, there is still much that is unknown about areas at risk. Not least of these are the biodiversity-rich primary forests of the Congo Basin and coral reefs off the eastern coasts of Africa. More resources and attention toward data collection and strengthening the science-policy interface in governmental institutions is key to raising awareness and directing effective policy.

More on:   Environment and Security