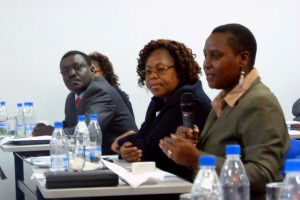 The Africa Center for Strategic Studies in collaboration with the U.S. Embassy, Dag Hammarskjöld Institute for Peace and Conflict Studies (DHIPS) and the Africa Center Zambia Community hosted a Topical Outreach Program Series (TOPS) Symposium in Lusaka, Zambia, on March 25–27, 2014.

Each of these seminars brought together about 60 mid- to senior-level military, civilian and police professionals from the Ministries of Defense and Foreign Affairs, Zambian Army, Air force, Zambia National Service and Zambia Police, Professionals from United Nations agencies, academia, and non-governmental organizations.

SADC, according to Dr. Mulikita, is the most peaceful and developed region in Africa with a comprehensive set of peace and security protocols, institutions and agreements. The SADC Organ for Politics, Defense and Security (OPDS), established in 1992, is the region’s link to the African Union Peace and Security Architecture (APSA).

Dr. Mulikita also cited several institutional weaknesses; the failure of the Early Warning System (EWS) to warn about impending conflicts; the lack of effective response mechanisms; the lack of a security sector reform (SSR) policy framework; and the lack of a mediation unit to facilitate dialogue between conflicting parties. He urged the AU and SADC to put more emphasis on institutional development and strengthening and the inclusion of civil society in the region’s peace and security activities.

In the seminar on national security strategy held at the Mulungushi Conference Center in Lusaka, His Excellency Edgar Lungu, the Zambian Minister of Defense, announced that the Government would hold a referendum on the country’s new constitution to make the process as consultative as possible.

“We will have ample time to go through the draft constitution and when we complete the process we will be guided by what the citizens’ want, if they want a referendum we will go with that even though it is an expensive venture to undertake,” he said.

The Minister also praised the country’s security sector institutions for supporting the democratic process, which he singled out as the most important guarantee of Zambia’s national security. “Our defense and security institutions are among the oldest and most experienced in Southern Africa and continue to be the bedrock upon which our democracy and peace are anchored, that is why our country remains a bastion of peace since independence.”

Ambassador Royson Mukwena, the Dean of the School of Social Sciences and Director of Research and Postgraduate Studies at Mulungushi University in Kabwe, Zambia, observed that Zambia, like many African countries, does not have a consolidated national security strategy.

“No single document,” he argued, “can be referred to as Zambia’s definitive national security strategy. … The country’s actual strategy is scattered in several legal, constitutional and policy documents.” Ambassador Mukwena however revealed that Zambia is considering embarking on a process leading to the adoption of the country’s first official national security strategy.

Speaking at the symposium on security sector reform (SSR), on March 26, Mr. Thomas Dempsey, Assistant Professor and Academic Chair for Security Studies at the Africa Center, noted that the focus of national security was shifting from regime survival and state security to human security.

This new approach to security, an approach that is articulated in several African national security strategy documents, is, according to Mr. Dempsey, “citizen-centric and community based; emphasizes the “linkages between security and development” and has at its core the objective of “serving the people.”

He identified several core competencies for the military and police on 27 March.

The core competencies for the military are: countering military threats, expeditionary capabilities, and developing rapid and scalable responses. Those for the police are: community presence, arresting authorities, limited and appropriate use of force and international as well as regional cooperation. Shared functions between the two include intelligence and information gathering and analysis.

Putting these competencies into effect, according to Mr. Dempsey, requires the development a whole-of-government national and human security process that enables effective military and police collaboration and planning.

A highlight of the three-day program was the creation of the Africa Center Zambia Chapter, the result of several months of work by the Africa Center Zambia Community, U.S. Embassy, Ministries of Foreign Affairs and Defense and the Dag Hammarskjöld Institute for Peace and Conflict Studies (DHIP). The Chapter, which brings the number of Africa Center Chapters in Africa to 33, will be embedded in the DHIPS. It brings together Africa Center alumni from the Zambian general staff and command including several in senior leadership positions in the Army, Air Force and National Service as well as security sector professionals from civil society and academia. The Zambia Chapter is highly organized, motivated, and populated with experts in security strategy and challenges.

The Topical Outreach Program Series (TOPS) is the Africa Center’s instrument for providing close support to African partners through rigorous and structured engagement with alumni.