Russia is the source of less than 1% of the foreign direct investment into Africa. Substantively, then, Russia brings little to the continent. But the fact that Russia’s Foreign Minister Sergey Lavrov is making a high-profile trip to Africa in the throes of Russia’s war on Ukraine reveals how much Russia needs Africa.

A priority for Lavrov’s trip to Egypt, the Republic of the Congo, Uganda, and Ethiopia is to show that Russia is not isolated internationally, despite expansive western sanctions. The objective is to portray Russia as an unencumbered Great Power that maintains allies around the globe with whom it can conduct business as usual.

Russia is also vying to normalize an international order where might makes right. And democracy and respect for human rights are optional.

Lavrov’s Africa trip is significant, accordingly, for Russia’s geostrategic posturing. Russian messaging recasts Russia’s imperialistic land grab in Ukraine as a broader East-West ideological struggle. To the extent that Moscow succeeds in this framing, few African countries will criticize it.

This, in part, explains why 25 of Africa’s 54 states abstained or did not vote to condemn Russia’s invasion of Ukraine during the UN General Assembly resolution ES-11/1 in March. This ambivalent response was in stark contrast to the overwhelming condemnation of Russia’s aggression from every other region of the world.

The Russian blockade has caused global grain prices to double this year, creating intense political and social strains throughout Africa.

Lavrov can also be expected to portray the recent Ukrainian-Russian deal to unblock more than 20 million metric tonnes of Ukrainian grain for export as a humanitarian gesture by Moscow. This, even though it was Russia’s invasion and blockade of Ukrainian ports that has prevented the grain from reaching international markets. Russia’s bombing of the Ukrainian port of Odessa the day after the agreement was signed suggests that Moscow will continue to try to weaponize the food crisis. All while blaming the west.

Egypt and Ethiopia—key countries on Lavrov’s itinerary—have been particularly hard hit by this disruption in food supply. The Russian blockade has caused global grain prices to double this year, creating intense political and social strains throughout Africa.

This begs the question of what African leaders gain from hosting Lavrov at a time when Russia is under severe criticism for its unprovoked aggression and the destabilization of global food, fuel, and fertilizer markets. The short answer is political support. 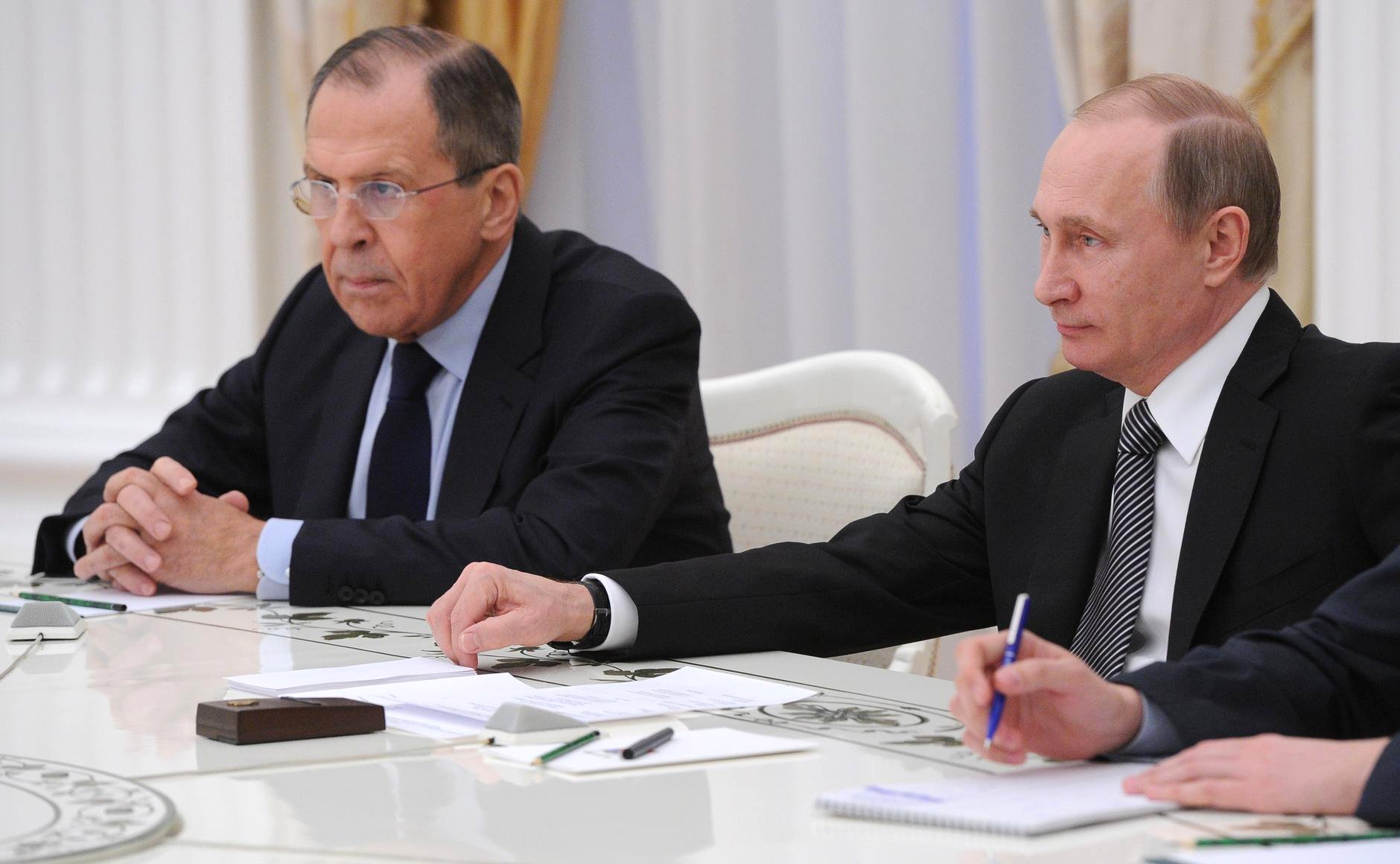 Russia’s expanding influence in Africa in recent years is mostly a result of Moscow’s use of unofficial means—deploying mercenaries, disinformation campaigns, arms for resources deals, and trafficking of precious metals. These low-cost, high-impact tools are typically employed in support of isolated African leaders with dubious legitimacy. Russian backing of beleaguered leaders in the Central African Republic (CAR), Mali, and Sudan has been vital to keeping these actors in power.

Russia’s asymmetric approach to gaining influence in Africa is also notable in that these “partnerships” are with the individual leaders Moscow is propping up—and not with the broader public. It’s about elite co-option more than traditional bilateral cooperation.

Egypt’s President Abdel al Sisi is a key ally in Russia’s efforts to install a proxy government in Libya. This would enable Russia to establish an enduring naval presence in the southern Mediterranean and tap Libyan oil reserves. Sisi has also been a Russian partner in attempting to derail the democratic transitions in Sudan and Tunisia.

Russia, moreover, is a major arms supplier for Egypt. A $25 billion Russian-financed loan for Russian atomic energy company Rosatom, to construct the Dabaa nuclear power plant, makes little economic sense. But it does provide a potential windfall for cronies of Sisi and Putin. And it is a means for Russia to gain further leverage over Sisi. 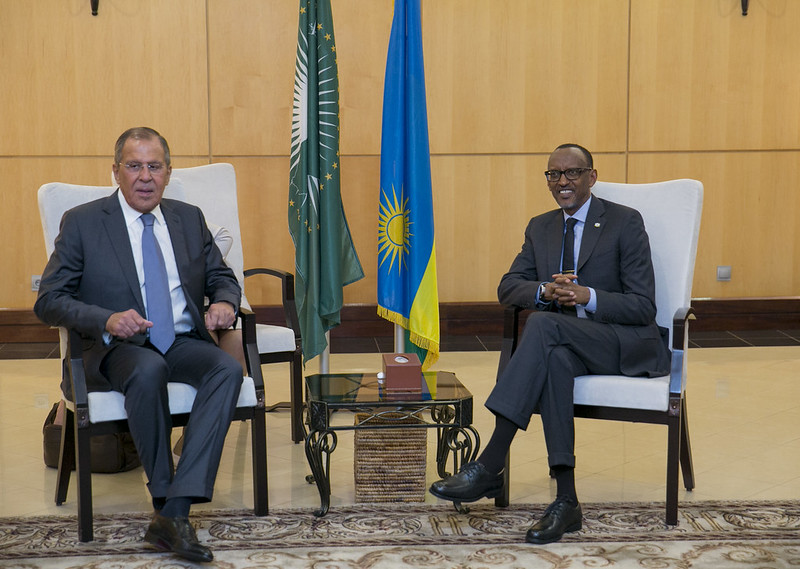 Lavrov meets with President Kagame in 2018. (Image: Office of the President of Rwanda)

Lavrov’s trip to Uganda provides political cover for the increasingly repressive and erratic regime of President Yoweri Museveni as it attempts to orchestrate a hereditary succession to Museveni’s son, Muhoozi Kainerugaba.

Russia’s driving interest in Uganda is to pull another historically western-leaning African country into Moscow’s orbit. For Museveni, drawing closer to Russia sends a none-too-subtle message that he will move further towards Moscow if the west is too critical of his deteriorating human rights and democratization record.

Ethiopia has long maintained an independent foreign policy. But Addis Ababa is set to host the next Russia-Africa summit meeting later this year. The event would provide a high-profile platform to reinforce Moscow’s message that it remains welcome on the global stage.

While in Addis Ababa, Lavrov can be expected to highlight Russia’s close ties with the African Union. Fear of annoying Russia led the regional body to repeatedly put off a virtual meeting with Ukrainian president Volodymr Zelensky. When the meeting was finally (and quietly) held in July, only four African heads of state tuned in.

The Republic of the Congo’s President Denis Sassou-Nguesso has led the Central African country for all but five years since he first came to power in 1979. The country is ranked 162 out of 180 countries on Transparency International’s annual corruption perception index. It has been on Moscow’s radar for expanding control of hydrocarbon exports from the Congo, the Democratic Republic of Congo, and CAR through Pointe Noire. This would further enhance Russia’s influence over global energy markets.

Lavrov’s visit demonstrates that there are African leaders who find political value in retaining ties with Russia, regardless of Moscow’s tarnished international reputation.

Notably, most of the countries on his African tour maintain significant relations with the west. Hosting a high-profile visit from Lavrov is not intended to scuttle these ties. Rather, it is an attempt to gain more leverage vis-à-vis the west.

But this is a dangerous game for these African leaders. Russia has an economy the size of Spain’s, does not provide significant investment or trade to the continent (other than grains and arms), and is increasingly disconnected from the international financial system.

Moreover, foreign direct investment is strongly correlated with upholding the rule of law. By signaling that they are open to Russia’s lawless international order, these African leaders risk damaging their prospects for greater western investment.

Nine of the top 10 countries investing in Africa, comprising 90% of foreign direct investment, are part of the western financial system. It may take years for African countries to recover from the reputational damage of embracing the Russian worldview that rule of law is arbitrary.

Moscow is trying to gain influence on the continent without investing in it.

Lavrov’s trip to Africa is not an isolated event. It is part of an ongoing dance. Moscow is trying to gain influence on the continent without investing in it. This strategy can only gain traction if certain African leaders see Russia as a means to validate their hold on power, despite objectionable human rights and democratic norms.

The advantages to Moscow and these African leaders are clear. For ordinary African citizens, not so much.

More on:    Russia in Africa    External Actors in Africa